I didn’t know what to expect from Paper Beast and after playing it, I honestly still can’t fully elaborate on what this game is BUT, I’m gonna do my best to try.  At its core this is an environmental puzzler that tasks you with manipulating animals, the environment or items to get to the next stage.  Outside that core though is a wonderous, fully realized world that is mysterious, intriguing, bizarre and so much more. 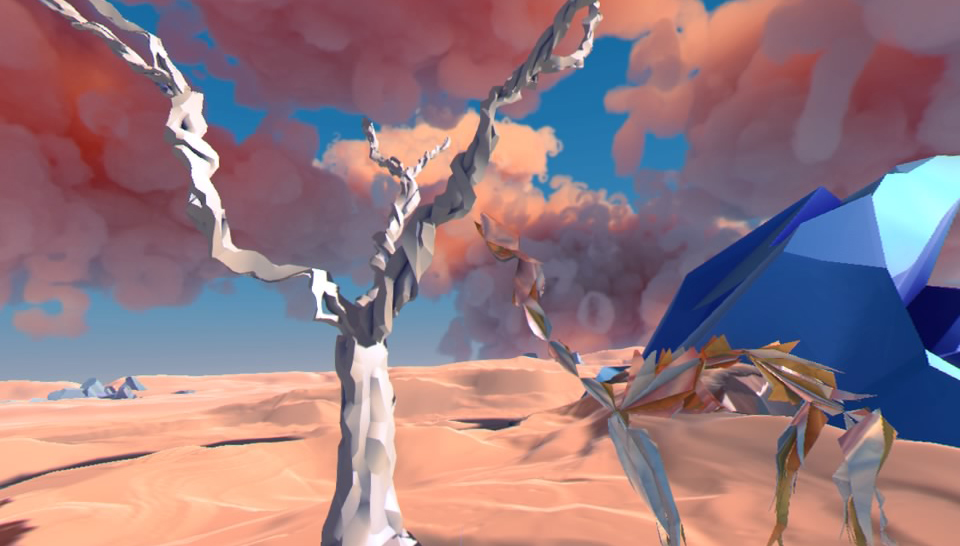 You can use the DS4 or 2 Move controllers but with this one though both play near identical which is largely due to the forced click-turning and teleportation movement schemes with either method, which was unfortunate to say the least.  Beyond that you can grab and pull at objects and animals and depending upon the size of what you are grabbing, you can do more or less with them.  There is a wonderful physics engine present that gives the levels in here so much life.  Each animal & some plant species behaves unlike any other and will be intricate in solving puzzles be it plant life that eats sand and spits it out somewhere else, a crab-like creature that rolls dirt balls up a hill making them larger or a plant that latches on to larger items and refuses to let them go.  There are a host of variables in this game that make each puzzle feel unique and thus fresh as you travel from stage to stage.  A bizarre pseudo-story pervades this experience which is revealed during the opening moments of the game and while it is elaborated, it’s never fully explained leaving much to the gamer’s imagination.  There are 8 stages in total, each broken up in small sections, with the total time running at roughly 3 to 4 hours depending upon your skills and just how many times you stop to take in the world around you.   Besides the campaign is sandbox mode which let’s you create your own little eco sphere using almost everything you come across during the campaign.   This mode also allows for extra ways to carve out and create the landscapes and while it felt a little more like a distraction when compared to the campaign, I’m sure more then a few will appreciate it’s inclusion as it does let you create your own little ecosystem. 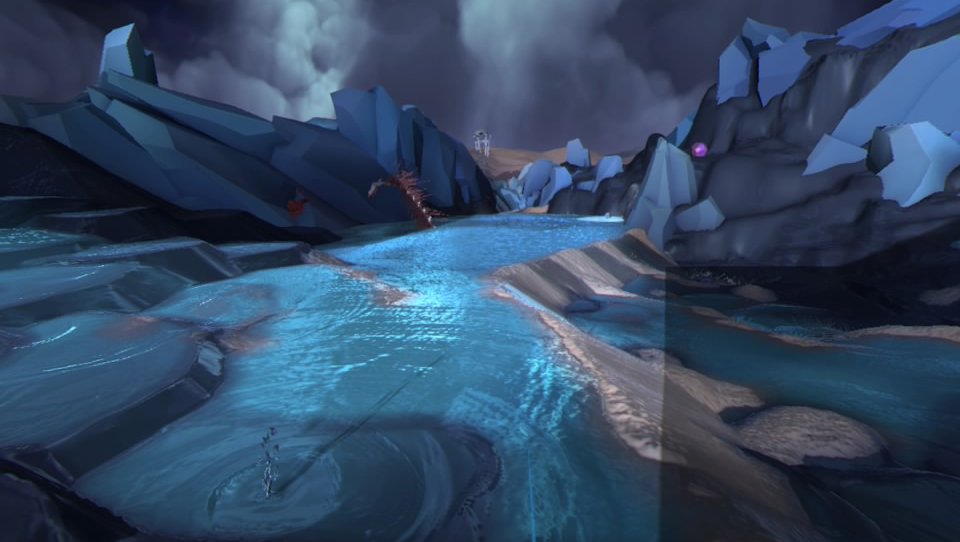 You have no idea how long I spent creating this damn.

Paper Beast looks like almost nothing else available in or out of VR.  I say almost because it does use voxels so for those familiar with Scultpr VR; the way the larger aspects of the environments look, like the ground, hills and other textures looks stark and almost bland at times.  That is until you see just how the terrain reacts to just about anything that touches it.  Once you are into this world, you are greeted by a large beast with each of his footsteps leaving small marks in the sand.  Later puzzles have you rearranging the landscape to redirect water flows or create paths for the animal to get from one side of a river to the other.  Lighting effects are some of the best I have ever seen adding haunting realism to this strange world with slick day and night shadowing that is amazing to behold.  I know I’m gushing as I talk about this, but I was truly enamoured by so many moments in this game that I often caught myself just taking in the sights around me.  The draw distance is huge with no pop-in or anything visually jarring making every scene fluid and natural.  The paper beasts in question are exactly that with them being made completely out of paper.   Some look like origami creations, others look like a mish mash of flowing paper or curled strands with all of them coming in a variety of colors and moving quite naturally as they react to the environment.  Some animals respond to held fruit, following you around like a lost puppy while other predators attack anything they come across and create their own obstacles.  It’s hard to describe but trust me when I say that this is something special. 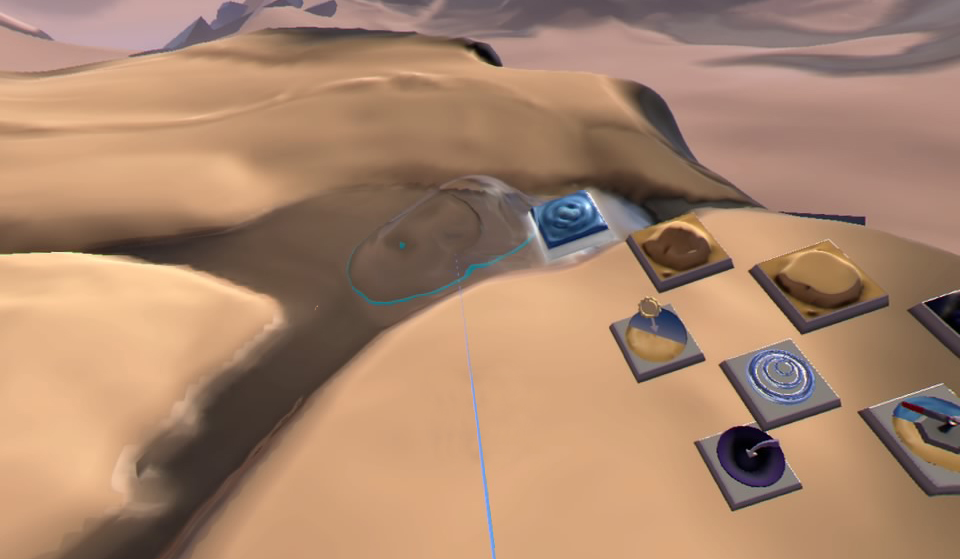 Customize and create your own ecosystem.

As much as I love the art style in this game, I think I love the audio design even more.  The 3D audio is arguably the best I have ever heard in any game.  Whether it’s the mewing or shuffling of a nearby animal, the freezing of a lake or the wind in your ears, the audio is on point.  I could mention so many specific examples but the one that blew my mind was a stage that had water crashing over my head and when my head rose above the water, only to be swallowed again by it was some of the most technically amazing audio effects I have ever heard.  Accentuating the amazing effects is an equally amazing soundtrack that adds the perfect level of solemnity and wonder to each stage.  The game tells you to wear headphones and for the love of all that is holy (or unholy of that’s your jam), please listen to those instructions as the sound design does not get better the what’s in here.

At this point, I think it’s pretty clear how much this game has affected me, but it does have a few issues to bring up, some of which will be much larger to some then others.  The locomotion controls did take away from the game as teleporting and click-turning through the environments is just not the way I want to view this world, plus if you are holding something and teleport, it may fly away from you.  The story will be a divisive point as well with much of it being left up too the player too decipher.  It’s minimalist but as I said, also a little bizarre and while that zaniness does point to a much larger plot, it’s ultimately left somewhat unresolved reminding me of the phrase “it’s not the destination, but that journey that matters.” I personally had no qualms with the campaign and even though I did have questions, the entirety of this game left me with a feeling of satisfaction above anything else.  There are some odd little glitches as animals and items collide with each other in awkward ways and I was stuck on a couple puzzles with the solution being a little confusing though nothing really held me up for too long.  The game goes out of it’s way to tell its story with some cinematic sections taking their sweet time to unfold but in truth, I appreciated these moments as well as, in my opinion, they only added to the wonder in this strange landscape. 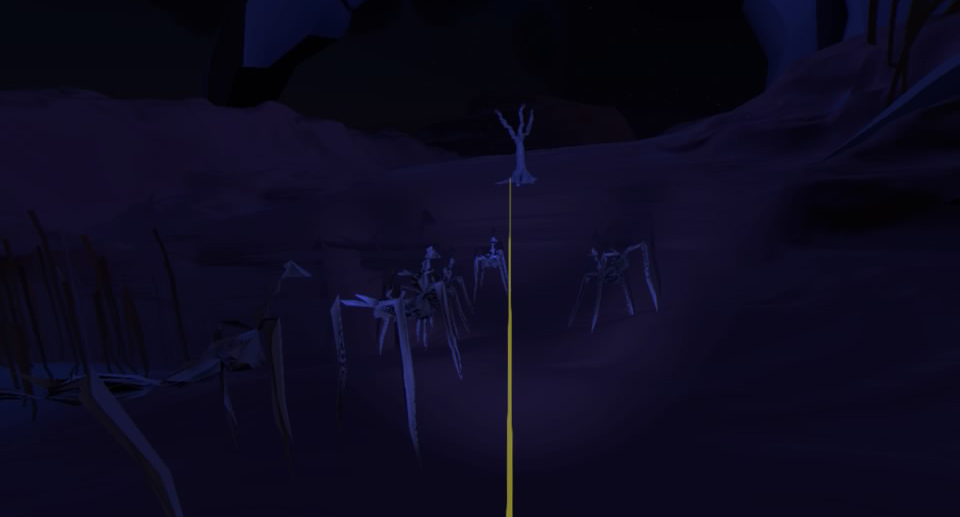 The night time scenes are just as beautiful as the daytime ones.

I love the puzzles in this game. I love the lack of hand holding. I love the world this takes place in and I love the art and sound design.  It might not be perfect, but its shortcomings are far outweighed by the spectacle that is the campaign.  As a VR reviewer I have seen so many titles come and go that the ‘wow’ factor just doesn’t occur as much as when I donned my first headset 4 years ago, but games like Paper Beast are a welcome reminder of just how awesome virtual reality can be.  For those looking for an immersive world and an interactive puzzler, Paper Beasts is one of the best and I highly recommend it!

What would I pay? This is $30 US and I say if you are at all curious then pull the trigger as it’s unlike any game I have ever played before, in a good way.

Pixel Reef provided The VR Grid with a press code for this title and, regardless of this review, we thank them for that!