Puzzle Bobble, or alternatively Bust-A-Move, is a franchise that has been around since 1994 and is a spin-off of one of my childhood favorites in Bubble Bobble for the NES.  It’s a franchise with over 20 titles across multiple platforms that saw a release for Quest headsets earlier in the year (review here) and has now received a PS4/PSVR port offering up slightly new ways to play thanks to releasing on the Sony console. 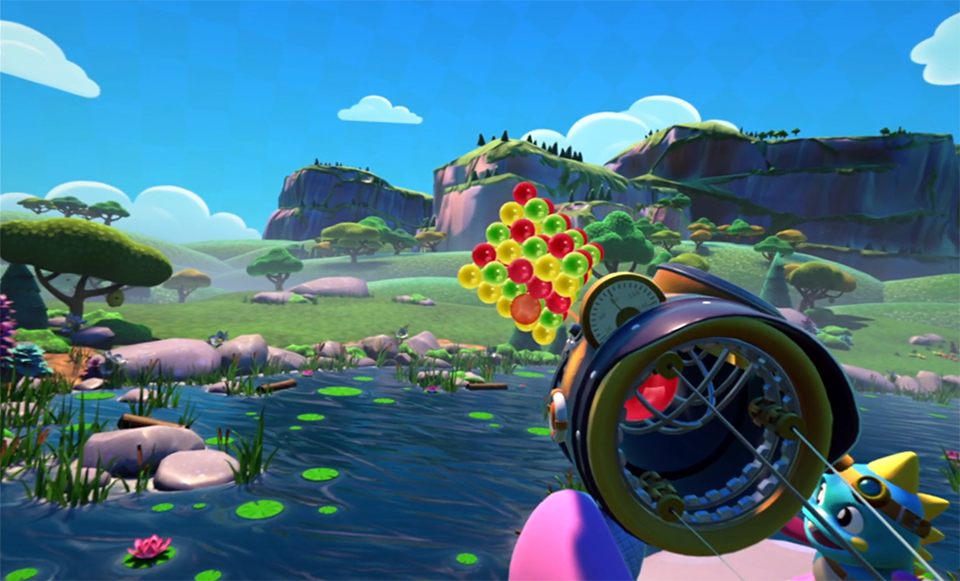 Take aim and fire…it’s that easy!

Using the Moves allows for identical play to the Quest version, having 1 hand load your next orb and pulling back on the slingshot(esque) launcher while the other hand holds the launcher.  You’ll be shooting at the various collection of orbs floating in front of you with Bub tossing you the next coloured ball while having 1 queued up which you can swap should that colour be of better use.  Also supported is the DS4 which removes the 2-handed slingshot aspect of the launcher with firing now being relegated to a button press.  You need to chain at least 3 balls together with any balls that are touching those 3, and are of the same colour, popping with the goal being to eliminate all the bubbles to get the core and destroy it.  Bubbles with stars in it will destroy any bubbles of that color while ones with skulls slow down your efforts by slowing down Bub while others change the colors of surrounding balls, blow up others and a few more additions as well. When you accrue enough coins, you can purchase single use power ups that can make any individual stage drastically easier with the initial cost being quite high though subsequent purchases cost much less.  These can let you blow up a huge cluster of bubbles, change their colors or spin all of them around.  There are 3 modes of play with the campaign being comprised of 100 stages, infinite mode let’s you play indefinitely until you fail or duel mode which has you facing off against another player online in some very frenetic efforts.  In addition to playing with other VR players, you can also play against other PS4/PS5 flat gamers which should increase the number of players to be found when playing online. 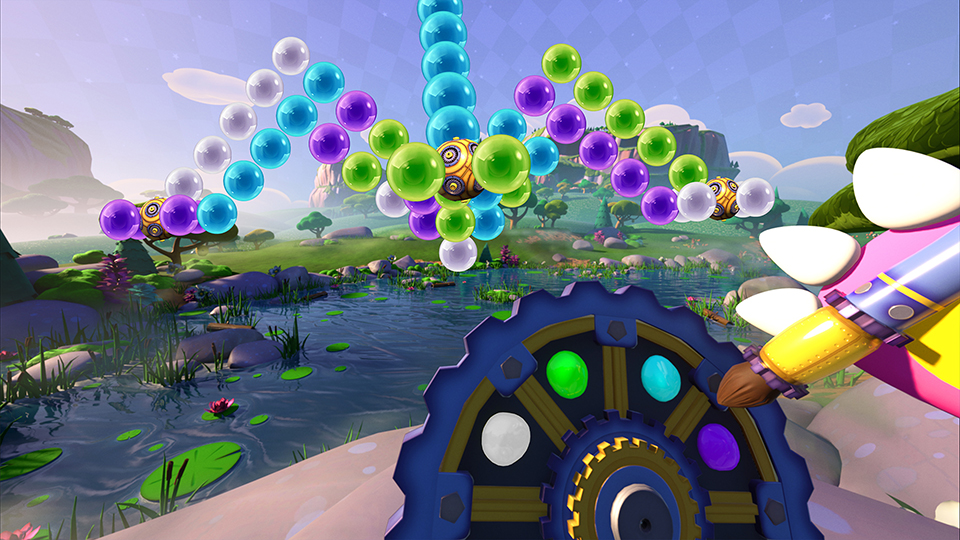 Puzzle Bobble VR looks really good as you are essentially taken on a tour of the island, visiting a variety of locales with the cluster of bubbles floating ahead of you.  You’ll find yourself playing on docks with an ocean view, ruins, cliff sides and plenty more areas, all taking place during different times of the day which is very noticeable by the stunning lighting effects at play.  Long shadows may blanket the landscape around you during a setting sun which also casts a light glow over Bub and your gun, making for some very immersive moments and I couldn’t help but just stop and admire my surroundings and gun as it reflected the fading suns light.  Bub is beside you with your next ball at the ready and animates fantastically, as if he were ripped right from a kid’s film, and your slingshot gun carries some fantastic details with little gears and rotors reacting to just how hard you pull back on the launcher.  The “story” if you want to call it that, is told by still frame images that occur every few stages but is honestly the most forgettable element in the game as it’s basically just a bad guy shows up, causes some trouble and now you need to play the game to beat him?  It doesn’t make sense and it doesn’t really need too as no one is playing a Puzzle Bobble game for the narrative.

Sound design is also on point with what may be the most satisfying sound in the history of gaming when you launch your ball with a massively successful shot.  The slingshot gun sounds like it packs a punch and when you knock off a huge chunk of spheres, cheers erupt, and Bub celebrates as well, making for a solid audible reward.  The soundtrack is mostly harmless, recycling tracks from previous titles as well as some new ones but really is only here to ensure the game isn’t bathed in silence as there isn’t too much going on outside of your slingshot.  That soundtrack is a collection of forgettable, but upbeat tunes that keep the mood light and while they do fall into the background, they never really annoyed me so I’m happy with that. 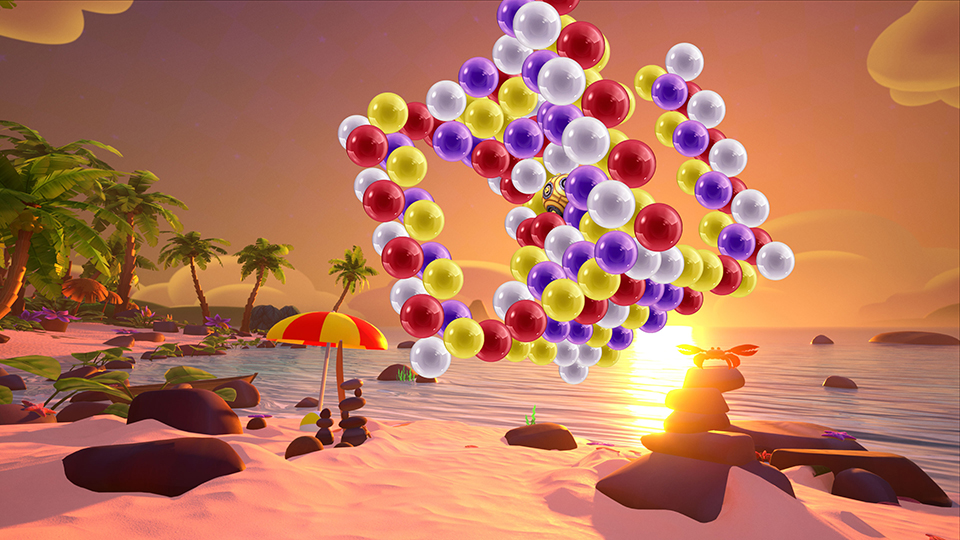 The lighting effects are really on point.

Puzzle Bobble makes the transition to VR near flawlessly, staying true to the classic franchise in every way that matters and while the game is near identical to the Quest version, the PS4 version does have quirks. The light tracked controllers can cause some unintentional launcher shake which did mess me up when I was going for some very precise shots on more than a few occasions.  While you can play online with other PS/VR players, there is no way to play locally which does seem like a significant oversight as having the ability to play with friends and family in the comfort of your living room, switching from VR to not would have been a great way to introduce the medium to new players though this feels more like a missed opportunity more than anything else. While this is largely a VR review, I would be remiss if I didn’t mention just how much more difficult playing flat is, and should you play online, I can’t help but think the VR players will have an advantage, which I suppose is a good thing in some ways.   Besides those minor issues, Vacation Odyssey feels like a proper VR evolution of the franchise delivering on gameplay that we have come to know and love that is now made better by being in Virtual Reality. 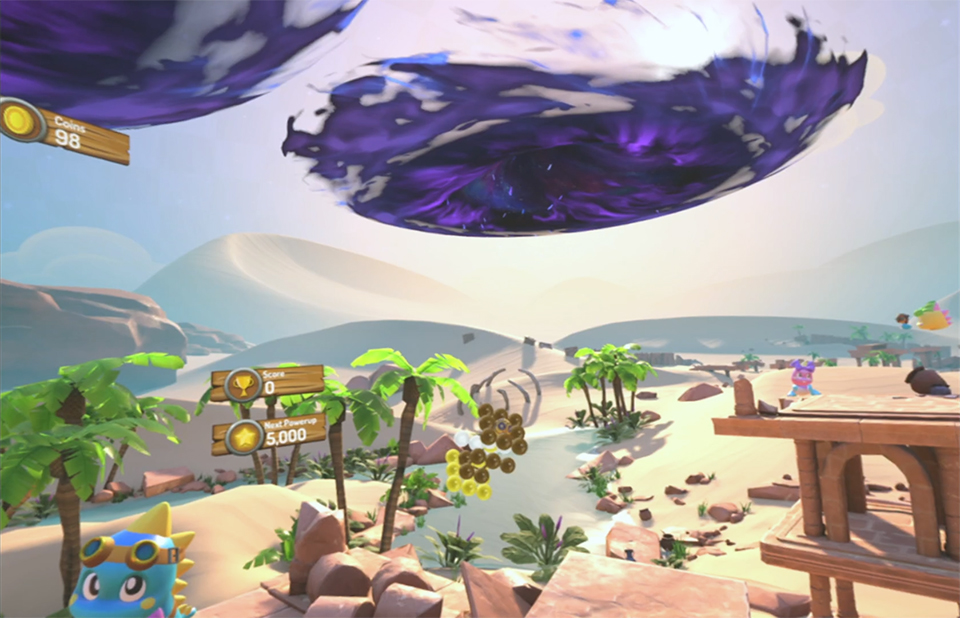 Play online in some frenetic action!

Puzzle Bobble in VR works great, and I think fans of the series will dig this latest instalment despite the shift to 3D gameplay.  If you aren’t a fan of the series, for whatever reason, I doubt this will change your mind as while I do think it is better in VR, it’s ultimately still the same formula.  The duel mode really spices things up however and if you are looking for a slightly more chill experience in a headset, Puzzle Bobble delivers a charming, addicting and challenging game.

What would I pay? This is $20 US and worth it for fans of the series as getting through the campaign stages will probably take at least a few hours and the additional modes offer some decent replay value.