Considering how long the PSVR has been out, I’m actually a little amazed by the lack of mini-game collection type games we had released on the system.  By my count, up until today, we only have 1, Carnival Games.  Considering the insane amount of them that were released during the Wii’s run and the similarities in controls between the Nintendo console and Move controllers, it seemed inevetible that we would be treated to the same onslaught of shovelware titles.  Thankfully, that hasn’t been the case at all and now get a 2nd collection of games that offers up some fun, frustration and something many of us have been waiting for since the PSVR’s launch. 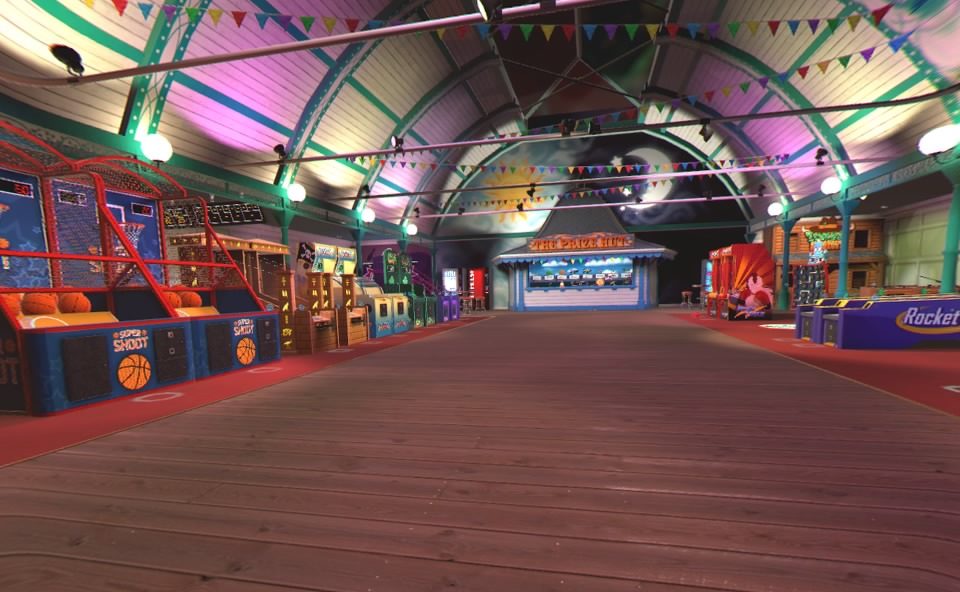 Pick a game, any game!

Minus the opening tutorial screen, the entire game takes place in one large room.  Walking around the room is done by teleportation (ugh!) and click-turning(double ugh!) and is actually a little bit of pain as a compass pops up when you want to turn whereupon you can pick the direction you want to face.  In this instance, just a simple 45 degree turn would have sufficed.  All the games have waypoints in front of them that set you in a proper place to play the game, though you can leave and jump around whenever you want.  To start a game, simply point at the coin slot and tap the move button to place a coin in the machine and start playing.  Each of the 15 games offers some different mechanics and typical of the mini-game genre, there are as many good ones as bad.

There are a host of games requiring to throw some type of ball into some type of hole, whether it be getting a basketball in a small net, bouncing ping-pong balls into a small square grid, or just tossing balls into holes on a wall or a vase.  Each one of these ball throwers is basically forgettable and while not inherently bad in anyway, didn’t keep my interest for more than a few rounds.  There is a whack-a-mole type game, a boxing game where you can punch pads that pop up, 2 shooters, one with a pistol and the other with a shotgun which requires the use of both hands.  There is a shuffleboard table, a bee game that requires you to lift a ball up a wall while avoiding holes, a light game where you need to hit the green lights and avoid the red ones.  An odd comet game that requires to tap a button to drop a ball onto a rotating game board and that’s about it.  Oh no, wait, I forgot to mention that we now get our 1st VR version of VR BOWLING in this collection and while it may not be perfect, it ain’t to bad either. 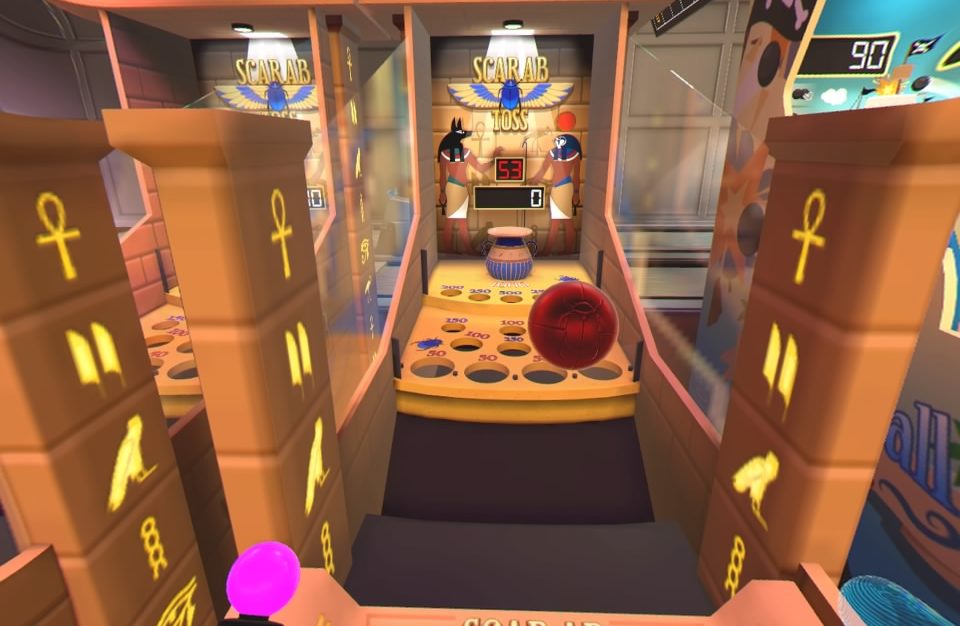 Get ready to throw a lot of balls!

The games aesthetic is…there.  What I mean to say is while nothing here looks inherently awful, nothing stands out as being anything other than serviceable.  The singular room containing all the games looks fine with some decorations scattered about.  It’s bright and colorful and pleasant to look at.  Most of the games contains some sort of lights or small animations and do feel like accurate representations of there real life counter parts.  Once you start a game, you may be treated some thematic music and once again, it works, but isn’t anything to special.

I found any of the games involving throwing to be forgettable.  Without that real world weight attached to what I am doing, the ball physics just felt a little floaty and I don’t think it’s the games fault, but the medium.  That leaves the whack-a-dino game, which is fun.  The boxing game which is ok, the light-up game can get a little frenetic as the prompts speed up, skeeball, and the comet game is forgettable.  The 2 shooters are fun, with one having you shoot a pistol at a diaorama type setup to take out cutout ducks, flowers, rabbits and balloons and the other has you holding a pump action shotgun and taking cowboy cutouts in front of a saloon.  Both of those are fun enough for a few rounds.  My favorites by far were the shuffleboard game, which felt great in VR and bowling. 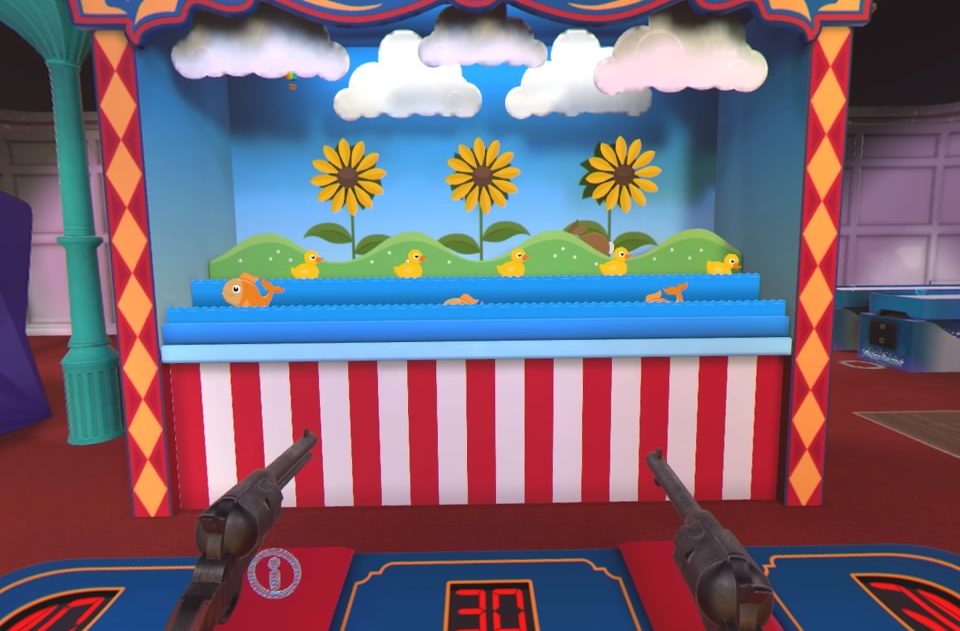 The bowling really is the standout attraction here.  Many of us have been waiting for PSVR version of bowling and now we have one.  It’s 10 pin and only 5 rounds.  With 2 balls each round.  It works but could use some more TLC.  From what I could tell there is no way to spin the ball, so wherever you toss the ball, it heads in a very straight line to the end.  Secondly is that all the options are set in stone so if you want to play 3 balls and 10 rounds…tough luck.  That said, it still plays alright and most of the games I did note appreciate could be made better by one, glaring omission.

Every single game here, minus the shooters is paired up, meaning that there are 2 machines at each station.  Unfortunatley, there is currently no multiplayer option as of yet, though I have heard that the dev is working on that for the PSVR version…it is available for the steam version of the game.  No matter how you feel about any of these games, playing beside a friend in a VR playroom in a competitive showdown would be a blast!  Every game also spits out tickets which can be spent on an assortment of random items at the prize booth, which you can than mess around with, though they don’t really do anything. 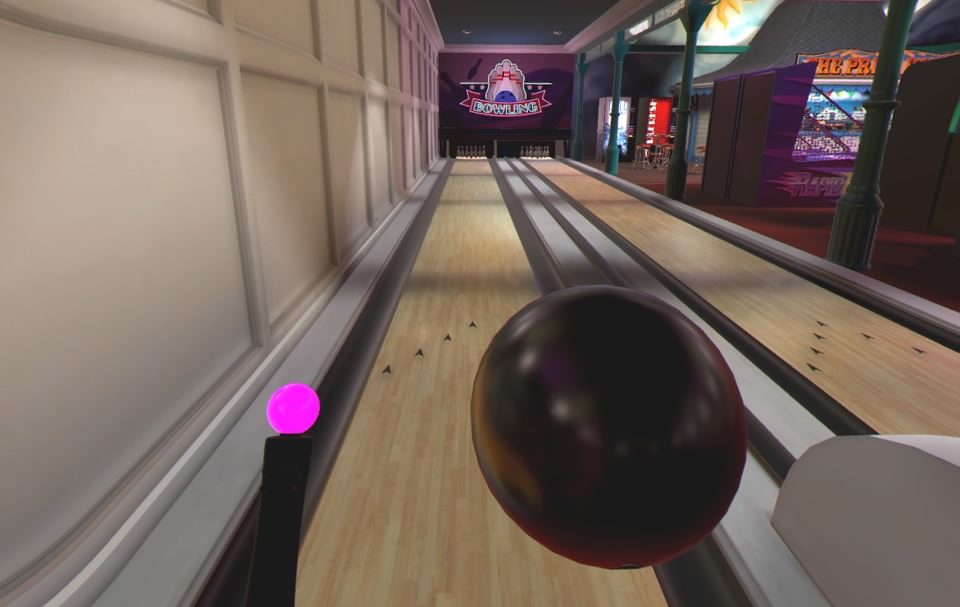 All in all, this is an uninspired collection of games with a few gems.  Better for newbies to VR than veterans.  Each game keeps track of your score and places them on local, global and friend leaderboards so you can still see how you stack up with the rest of the PSVR world.  If you like mini-game collections and chasing top scores than this is probably for you, for everyone else I think you’ll have fun of probably a 1/3 of the games and for get about the rest of them.

What would I pay? $10 seems a little more appropriate for what’s currently available.  If this had multiplayer, I’d be happy with the full asking price of $15.

Archiact Interactive provided The VR Grid  with review code for this title and, regardless of  this review, we thank them for that!