I think I need to preface this review by saying that I’m not a Dr. Who fan… or at least I haven’t followed Dr. Who since it’s popular revival a decade or 2 ago.  In fact, my memories of the show are quite dour as Dr. Who was on TV before my Saturday morning cartoons and if I woke up too early I was forced to watch that black and white show before I got to watch Captain Planet or whatever I was looking forward too.  Suffice to say I have no bias toward the show but am quite unfamiliar with the franchise as a whole so I’m going into this VR game with little to no context of the characters or universe. 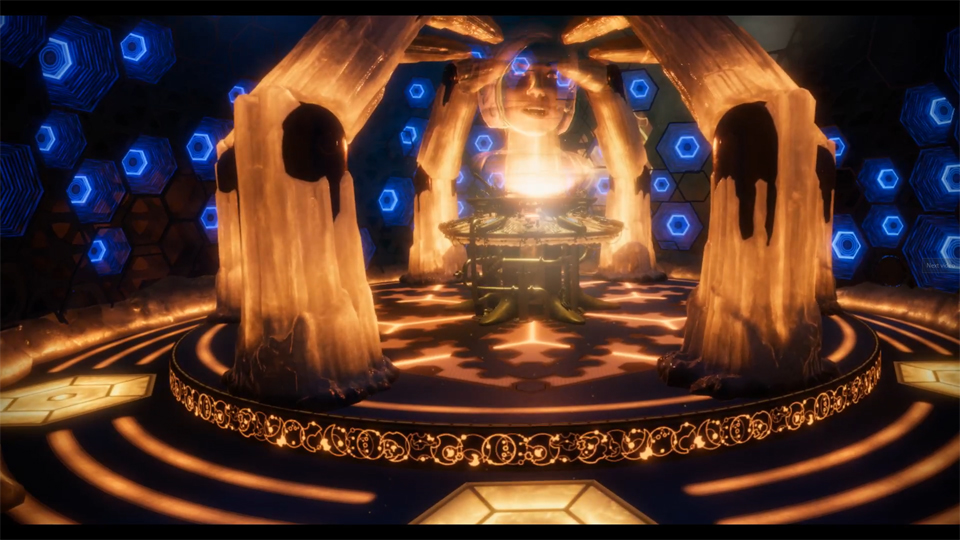 Welcome to the Tardis!

So, what exactly is this little VR tie in?  I would say it feels like a 2-parter…maybe a season a finale of an episodic show centered around the infamous doctor…only you don’t play the doctor.  Instead you play as an associate of the doctor, caught up in a potential universe ending plot from an unknown villain, forced to navigate through some very random settings while visiting some franchise familiar adversaries.   At its core, this is a first-person puzzler placing you in dire situations that would seemingly require quick thinking though in truth you are given as much time as you need to solve them.  Without spoiling too much, you are looking for 3 shards scattered across the cosmos and thanks to the Tardis, your spaceship, travelling between these stages is as simple as a loading screen.  You’ll have to grab items, press buttons, pull levers and so on as you navigate through the 2-hour (ish) campaign.  Thanks to a trusty ‘sonic screwdriver’ which basically acts as universal multi-tool, many obstacles are a quick trigger press away from being bypassed.  A few level specific mechanics show up with a notable one being an on-the-rails shooting gallery during the climax of the game.  Each stage mixes things up just enough to keep you on your toes and while the campaign may be brief, it excels in entertainment value. 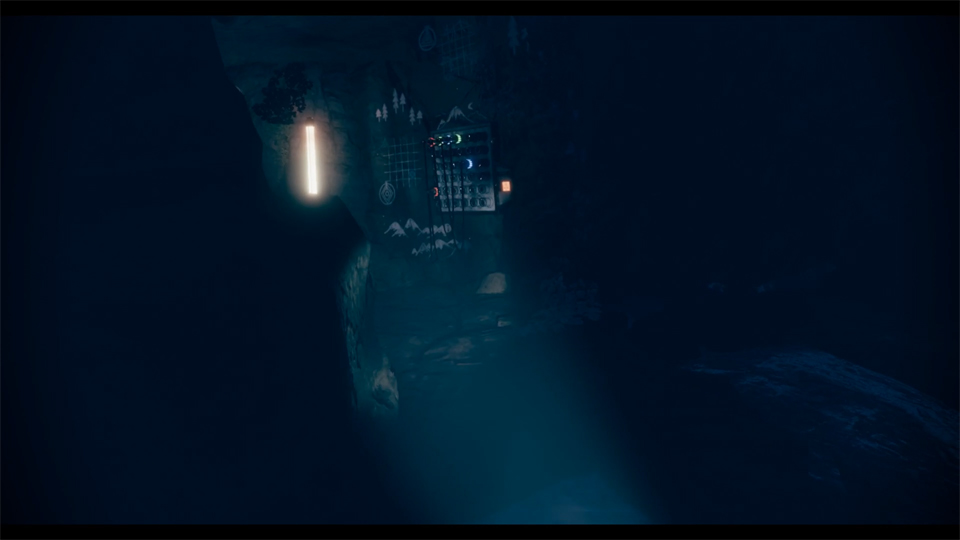 As this is a tie-in to a relatively popular series, presentation is key in making this an experience familiar to what fans of the show expect.  I’m happy to say that the game excels in this department and delivers some outstanding and memorable moments.  Just opening the phone booth doors that lead into the Tardis is a treat and as I said, each level is its own beast.  You’ll visit a laundromat, alien planet, underground tunnels and monolithic ruins with the twist that you’ll also have to travel through space and time, dramatically changing how each of these stages looks and even behaves.  It wouldn’t be a tie in without some fan service and included in this trek are Dr. Who classics like the Weeping angels, Daleks and a few other homages to encounters from previous episodes.  You’ll also meet the current Doctor, who aids you on your quest with the overall quality in the presentation being top-notch.  Lighting effects add a ton of realism to each stage and the attention to detail in almost any aspect of the visuals hammers home that this is a top-quality production.

There is a ton of voice work in here and while you are typically silent in your VR protagonist role, everyone around you is anything but.   Jodie Whitaker lends her voice and character to the doctor and I’m assuming delivers a top tier performance akin to what she does on TV.  Other beings met exude all manner of performances with special note going to the Daleks whom I found to be hilarious in their continual shouting of the word “exterminate” with their grating and comical voices.  Special effects, the soundtrack and even a quick intro sequence all sound as if they were ripped from a licensed product and do an excellent job at putting you in this universe. 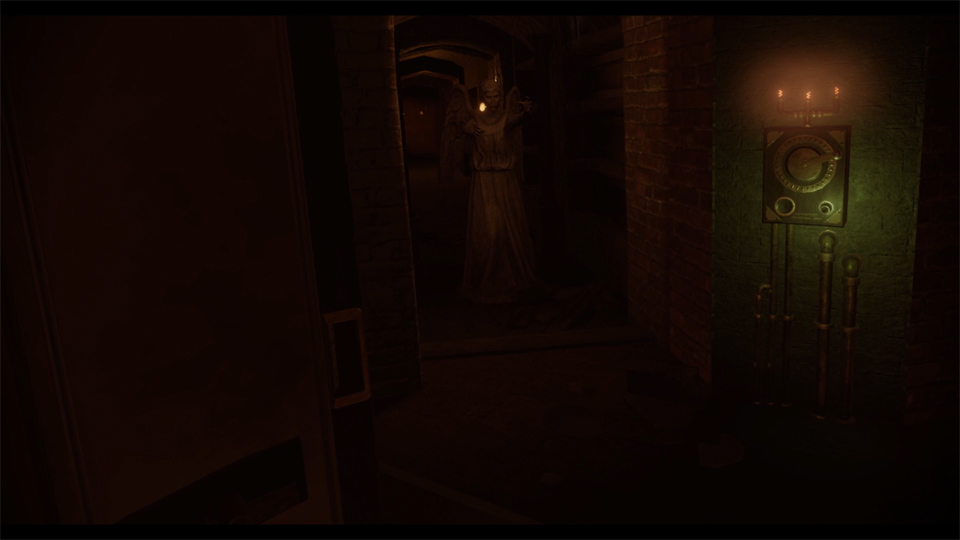 I lied to you…there is nothing funny about the weeping angels.

There are a few comfort settings in here and worth noting is that the smooth turning option, even set to max speed is unbearably slow to a point where I just opted to use click-turning instead as it was much faster.  The puzzles are also, for the most part, incredibly easy with an audible assistant on hand to tell you what to do should you be taking too long.  A few of them did hold me up for a minute or 2 but pay attention to what exactly is happening, and you shouldn’t have any issues.  There is very little risk in this game as only 2 of the 5 stages offer any real way to fail and even if you do, the game reloads exactly where you left off making failure nothing more then a slight hiccup in your efforts.  As a non-fan I had no issues following the story and while some of the narrative is delivered in a fast and frenetic pace, I thoroughly enjoyed the light-heated nature of the entire game and comedy spread throughout.  As dire as the situation gets, and it gets dire, everything is delivered in a friendly fashion that should appeal to a broad audience. 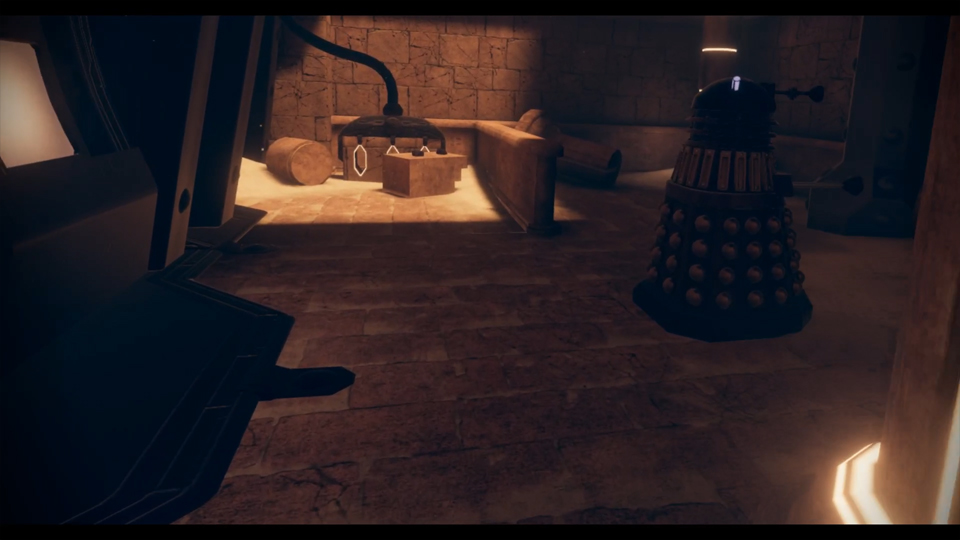 I had a good time with The Edge of Time and in truth I am more intrigued then ever to see what exactly the Dr. Who phenomenon is about.  It definitely lends itself to a more casual audience but that was expected and as far as I can tell delivers an experience on par with what is delivered in series.  Fans of the show should rejoice at being a part of one of the doctor’s adventures and even those unfamiliar with the franchise will have a great time in this light-hearted science fiction universe.

What would I pay?  The $20 price tag on this is fair.  This feels like the kind of VR tie in we deserve more of and while it could use a little more depth when compared to larger VR efforts, I really can’t deny how much fun I had aiding the doctor in saving the universe.

Maze Theory / PlayStack provided The VR Grid with a press code for this title and, regardless of this review, we thank them for that!