Whatever the end result may be, I love new experiences in VR.  Whether it’s a game type I’ve never really explored before, one that utilizes VR to enhance its genre or something entirely different, experimentation with Virtual Reality experiences is always exciting.  Area Man Lives, for myself, is in that latter category as it is a narrative driven story with you playing as a local radio DJ names Taylor who gets caught up in an insane story with some listeners of your show.  Not only must you interact with them in some unique ways, but you’ll have to guide them through ridiculous obstacles, all from the safety of your DJ desk. 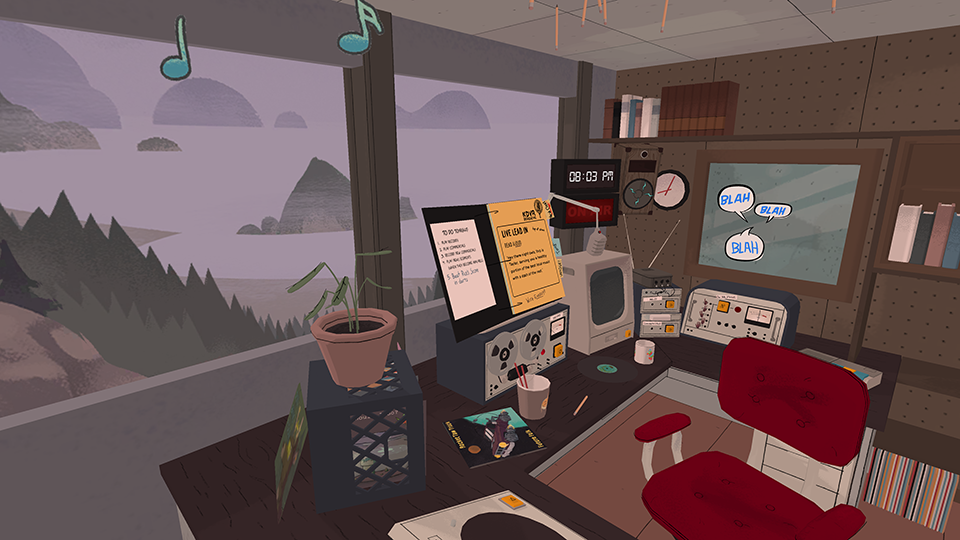 Welcome to your little DJ booth.

As you are confined to the broadcast room of your radio station, the play space is limited to node teleportation though if you had the play space, you could play this using room-scale with the only turn option being 45 degree click turning which, in 2022, is not acceptable and I hope they add a smooth turn option to accommodate those that use it.  There are no other comfort options to speak of which would be fine save for the absence of a height adjustment bar as I found my height throughout the game was too short while playing seated, which is how the game is supposed to be played and standing hampered immersion so if any option were to be added, I would prefer it be that.  As far as the gameplay goes, you’ll be in a broadcast booth and carry out your DJ duties by playing music tracks, commercials and talking to callers all while guiding the Area Man, a lost soul who is depending on you to avert tragedy.  You guide him by playing those musical numbers and commercials and aid him by messing around with the items around you which was, by design, incredibly confusing on my 1st playthrough as very little is explained at the game’s onset.  One of the best interactions is the voice recognition used, which requires an internet connection, that allows the player to not only answer questions, but ask them as well and while this mechanic is used sparingly, in my play it worked near flawlessly making for a very impressive use of VR.  When a situation calls for you to react, the right decision will push the story along while a wrong one will result in a comedic ending to that situation before the game resets back to that choice so you can try a different one.  Getting through multiple false endings and the final true one will take many hours and as of this review I have unlocked about 60% of the narrative paths with around 5 hours invested in the game so far so there is a fair bit of game to sit through. 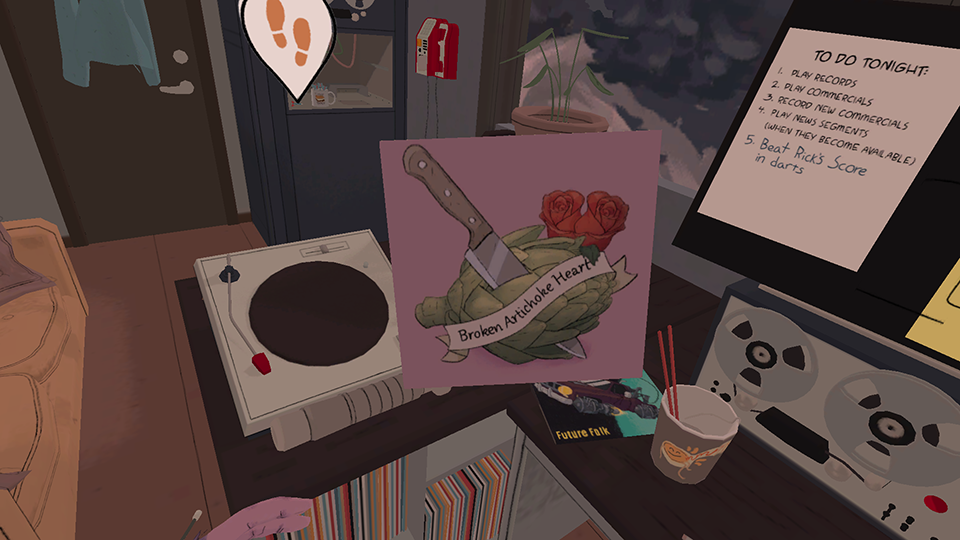 Area Man Lives opts for a sketchy cartoonish art style, reminiscent of the recently released puzzle game Unbinary, but based a little more in reality and while I did appreciate that art style in that title, in this, it feels too simple, especially when you are essentially locked in 1 room.  When conversations occur, you can hear them of course, but also see the text somewhere in front of you on a wall, window or glove box or whatever, so you can always read along to the plot.   Various items pivotal to the story are scattered around you so it’s best to pay attention and get a good look at everything because if you can interact with it, it’ll be needed for some reason or another on your near stationary journey.  It’s hard not to address my other issues without spoiling some of the surprises so I’ll be as vague as I possibly can and just say that everything in here looks undercooked with items carrying minimal animations, events occurring outside your radio booth looking extremely basic, oftentimes showing the simplest images and short cut scenes that leave much of the events up to your imagination. I’m not necessarily saying that’s outright terrible, but considering some of the situations you guide the Area Man to, what’s on display can feel incredibly lacking at times and while I really wasn’t impressed by the presentation, the actor’s performances and freakishly weird story are the true star of this show. 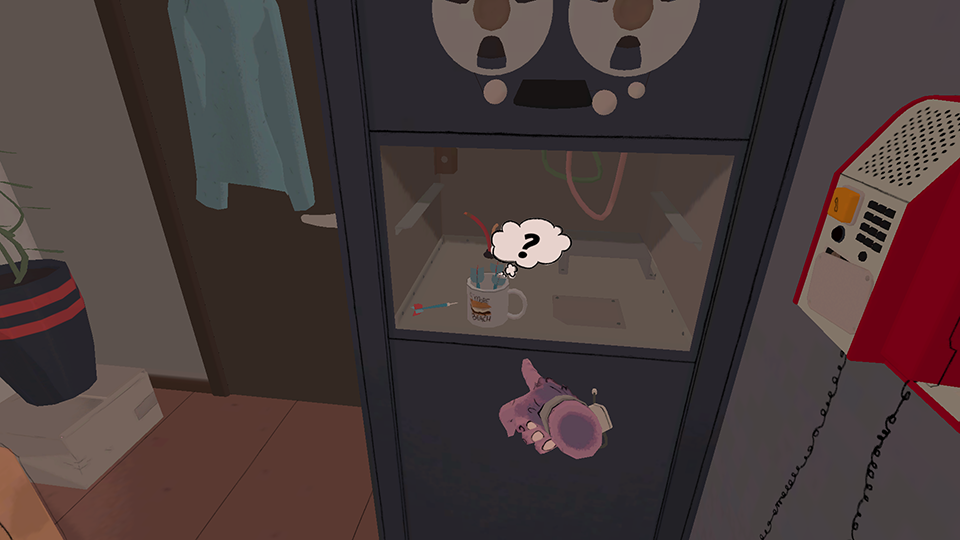 If you can mess with it, it’s important.

While you utilize your own voice here, accompanying you are comedy veterans Joel McHale (Community) and Max Greenfield (The New Girl) who deliver solid performances with Max stealing the show as the eccentric Area Man who is nothing short of insane, but charismatic enough to keep me enjoying every new situation he found himself in. Along with those 2 actors are a few more players, most notable are your producer, who helps steer you in the right direction and the narrator, who will show up from time and breakdown the plot, especially on those repeat plays when you reach 1 of the 5 false endings and start over, skipping past the opening moments of the game so you can make different choices.  There are countless hours of dialogue with almost 100 ways to kill the Area Man and just as many solutions to keep him moving ensuring there is plenty of story to keep anyone entertained for hours.

I haven’t’ played a lot of narrative heavy titles like Area Man Lives but out of the VR ones I’ve played (Hitchhiker, Tokyo Chronos, Project Lux…) I think I enjoy this one the most.  While it definitely lacks in the visual department, the performances, story and choice more than make up for its shortcomings.  With that said, this won’t be for everyone with my first run through the game being incredibly confusing and I think that alone could potentially turn away players.  It wasn’t until I went back and checked my press release did I start to realize just how I could affect the world around me.  After that, progressing through this tale was relatively easy and it became more of a matter of remembering which choices I had made previously so as too not repeat them, though some may still have to repeat as certain narrative paths are only accessible by replaying others an extra time or 2.  Some of the dialogue sections can also be extensive having the player just sit and listen for quite awhile so for those interested in this, be warned that it is not an action packed adventure. 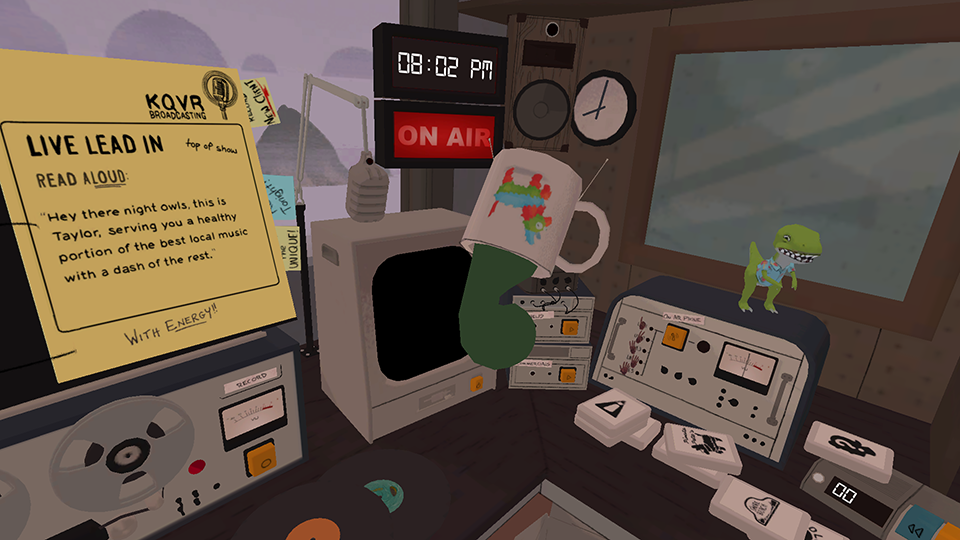 That is some OLD coffee!

Self described as a ‘quirky VR adventure that mixes comics with radio dramas’, Area Man Lives just won’t be for everyone, but for those that are looking for a more chill & passive but meaty experience, this delivers plenty of entertainment value.  The voice recognition adds a really slick level to the immersion factor, and I think it’s use here is the best I’ve ever seen, though admittedly, that is limited to a few games.  If you are into the games I mentioned above than I think you’ll enjoy Area Man Lives, just be aware that your first playthrough is going to be confusing, but stick with it and you’ll have a good time!

What would I pay?  For $20 US, I think that’s a great deal!  It’s a choose your own adventure type experience that uses VR relatively well and while I would have like a more polished visual style, just about everything else in here makes up for that shortcoming and makes for one heck of VR Radio drama.

Cyan Ventures provided The VR Grid with a press code for this title and, regardless of this review, we thank them for that!