Hiromichi Takahashi is the director/producer of Onogoro and if that name sounds at all familiar, that’s because he and his team were behind one of VR’s more divisive titles in Last Labyrinth, a puzzle game that had you protecting a young girl in a horrific trap laden house while you were strapped to a wheelchair.  In this much more light-hearted follow-up title, gone are all the dark and dreary themes as you are now on the magical island of Onogoro, summoned by Haru, a young priestess with magical powers who was betrayed and held captive as 5 entities known as the Kami took over the island.  It’s up to you and Haru to puzzle solve your way to the islands center, navigating past the creatures and obstacles in your way. 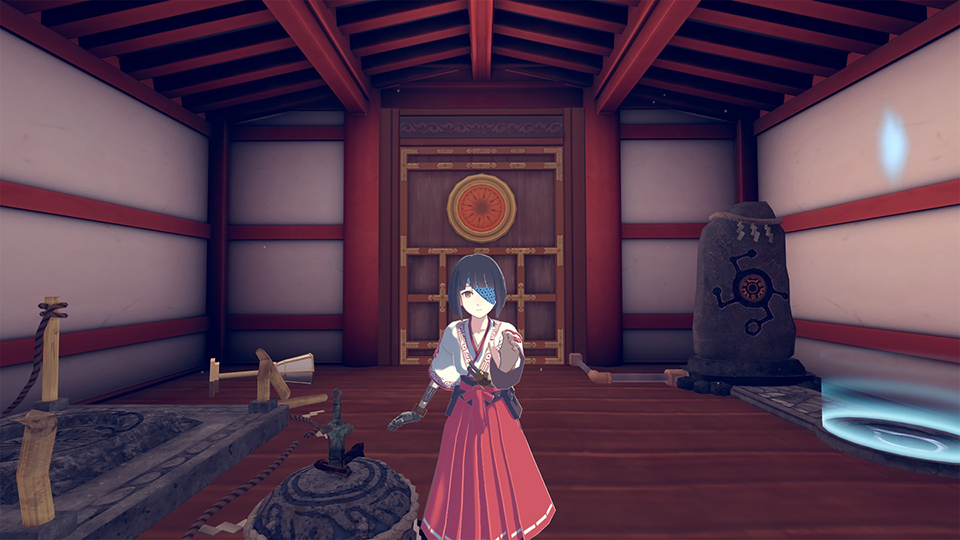 In Last Labyrinth, you were confined to a wheelchair, relying on Katia to push you around and Onogoro has cleverly reversed those roles as you must help Haru, who has been shackled to a large magical stone.  Thankfully, you are a being of magic and can use your Celestial weapons to not only grab that rock upon which she will ride, but activate triggers and totems that provide you with the various powers you will need to get through each puzzle.  The puzzles start off simple enough by either having Haru activate stones that act as triggers for whatever machinery they are linked too with elemental totems popping up that arm your weapons with the various enemies you face only being able to be dispatched by the element that matches theirs.  As you progress through this campaign, new elements and obstacles get in your way, forcing you to think outside the box as each puzzle gets more and more complex.  The smaller enemies you face, called Kenzoku, may be stationary or patrol on the ground or in the air and if they see you or Haru, will fire slow moving blasts or swing weapons at you and should either of you take too many hits, you’ll have to find cover and hold her hands to replenish your life.  You also can’t travel too far away from Haru and you’ll know if you do as your world begins to digitally degrade and black fills your vision.   Comfort options are available allowing for Full locomotion or click turning, teleport and optional blinders ensuring anyone should feel comfortable playing this.  There are 5 stages to get through, each broken into smaller puzzles with each puzzle having a 3-star system as well as 2 hidden orbs to find and to get max points, you need to beat each stage in the fastest time and find both those orbs. 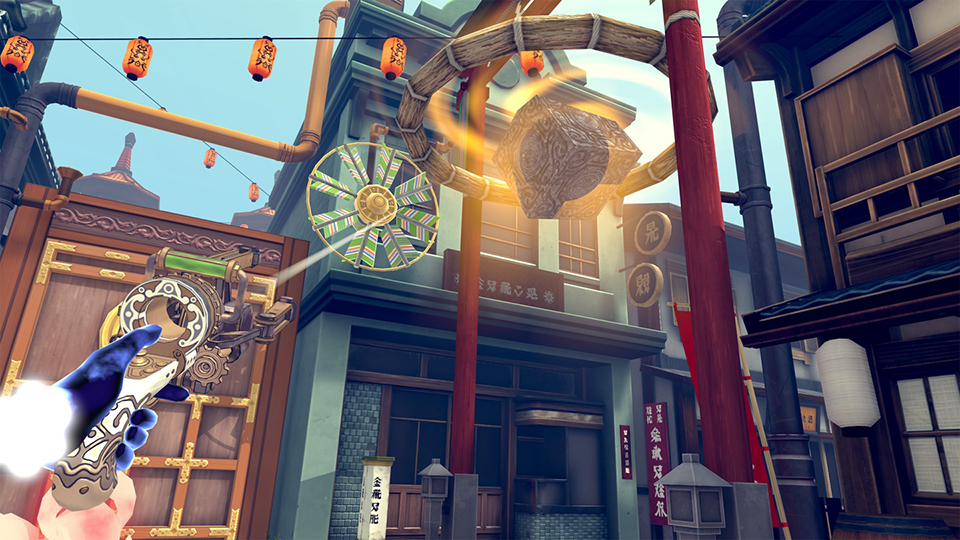 Pay attention to your surroundings as it can be easy to miss key elements of a puzzle.

Onogoro is a floating island that exists in an alternate, steam punk version of 1923 where steam and magic, know is Ki, power the world around which you now find yourself after being summoned by Haru.  Almost everything in the game looks fantastic thanks to the cell shaded manga style of animation used in combination with a very bright color palette and fully realized world.  The puzzles are broken up into smaller areas, typically city streets, squares, factory settings and a host more that all look fantastic. Each of the 5 areas has its own different theme and as you solve puzzles and travel through that area of the city, you are treated to new obstacles that make this island feel like it was recently populated.  Haru is your typical “cute anime girl” who, through the betrayal of her comrade is missing organs and limbs that have been replaced with steampunk alternatives and with each Kami you defeat you restore one her lost body parts.  Some great lighting is in effect on her and the items/enemies you can interact with making for a very polished looking experience for the Quest platform.   When you encounter the Kami, they are massive creatures that each need to be taken out in their own specific way and are impressive to see in VR as they tower over you or fly overhead.  It’s a gorgeous game and it’s very clear that a lot of time and effort went into making sure the visuals matched the mythos of this mysterious world. 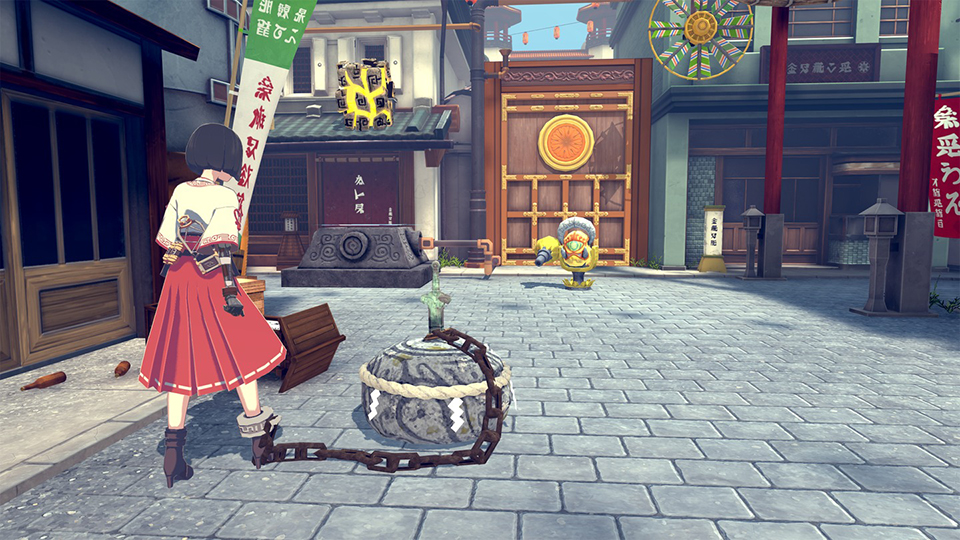 Shooting these guys is usually fairly easy, unless they spawn in large numbers

Also remedied from AMATA’s K.K.’s previous game is how you relate to the young girl because, in Last Labyrinth, you really didn’t know much about Katia and it seemed like you were more victims of circumstance.  Here, Haru has summoned you to aid her and has no problem telling you the story up to your arrival including not just her past, but the histories of the world as well.  Where I became annoyed was just how much exposition can be presented, and repeated, which is made worse if you fail a puzzle and must endure the opening stage conversation once more.  There is an option to skip these in the settings, but it’s labelled as ‘Skip Event’ so I missed it during my time with the game.  Efforts were clearly made to really flesh out Haru and the Island of Onogoro and I do appreciate the story here, it can just be a bit much at times, though there is an option in the settings to allow the conversations to be skipped.  She may occasionally ask you questions or ask to activate a stone and in these moments, you’ll need to nod or shake your head, a mechanic I appreciate as it adds an additional layer to immersion.  Music is thematically a mix of classic Japanese stylings and fantasy offerings and works wonderfully with the passive puzzle solving and more frantic boss encounters and when combined with the stellar 3D audio, the presentation is impressive! 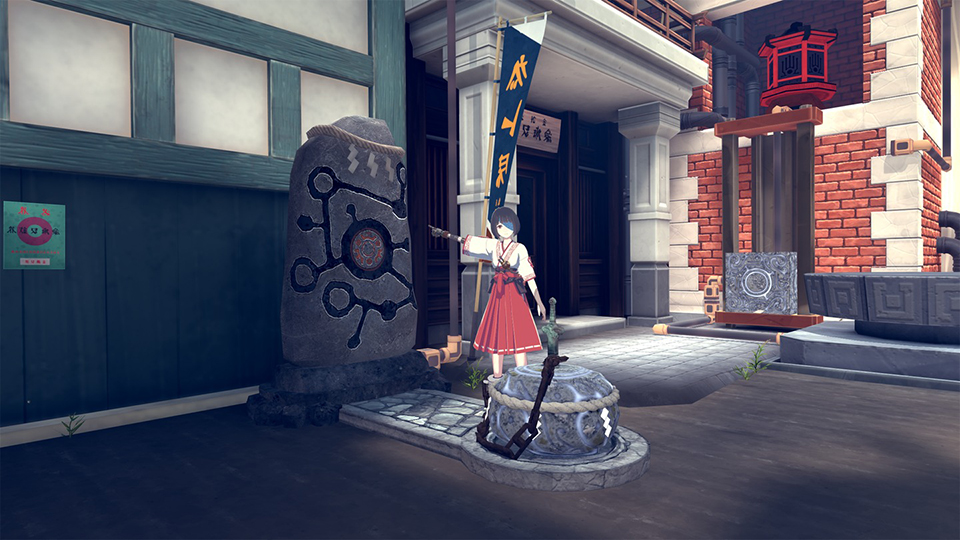 When she points, you’ll need to nod or shake your head to instruct her.

The Tale of Onogoro is a step in the right direction for the developer as the gameplay and story are much more focused than their previous effort.  Unfortunately, there is still room for improvement as the game just doesn’t flow as well as it should.  Puzzles can be obtuse as new mechanics may not be explained properly, forcing A LOT of trial of error testing, which I don’t mind, but when I wasn’t aware of how a specific ability could be used or works it led to some frustration.  The save system only allows you to start at the last puzzle so if I did spend a lot of time on a puzzle and had to quit, I had to restart and while I knew the solutions up to that point, some of the puzzles are quite large and involve physics and item moving that just takes a lot of time.   There is a 3-star system in place that encourages you to beat each puzzle as fast as possible which will be impossible on your first go, but the only way to replay them is to beat the game, and by the time that happened I was more than done with this world.  The game and puzzles are very well thought out and as I figured out just how the mechanics worked, they were quite fun and challenging but when you hit those walls and are stuck trying to decipher the next new mechanic, unaware that it might even exist, it can be maddening. 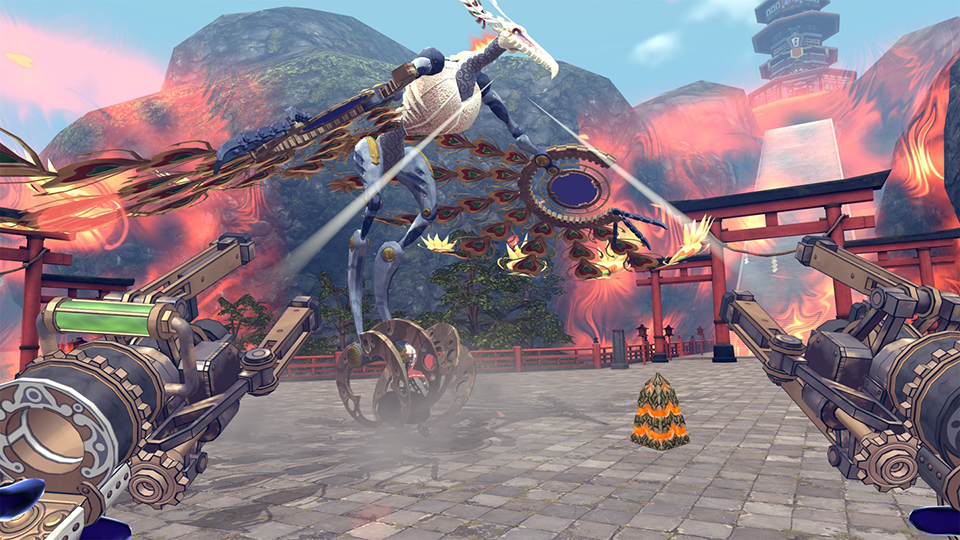 The Kami battles mix the puzzle solving and combat mechanics quite nicely.

When I wasn’t frustrated, or annoyed by some of Haru’s ramblings, I really enjoyed the unique puzzle design and its combination of steampunk technology, magic & physics.  Puzzle lovers will pull a lot out of this as the latter half of the game offers significant challenge but can also be frustrating.  As such, I recommend this to puzzle junkies as the ones here are unique and rewarding.  For more casual players, the frustration and excessive dialogue may chase many away before they can see all that Onogoro has to offer.

What would I pay?  This is $30 US which is on point for the content, but the frustrations and issues I mentioned have me thinking this should be 5 or $10 cheaper as to not chase away casual players.  If you love VR puzzles, I recommend this for the asking price, but if you are worried about the problems I mentioned, maybe hold off for sale.

Meta provided a press code for this title and, regardless of this review we thank them for that!