I don’t think there is anything more isolating than being in space, alone with only your wits to survive whatever harrowing situation a game has placed you in.  I’ve navigated asteroid fields, pulled my way through space stations, killed hordes of aliens and just flew some spacecraft and still none of those experiences have fully prepared me for Interkosmos 2000.  Interkosmos 2000 is part simulation & part environmental puzzler that places you as the lone astronaut in a tiny space shuttle in 1999, tasked with completing missions while managing all the components around and keeping yourself alive. 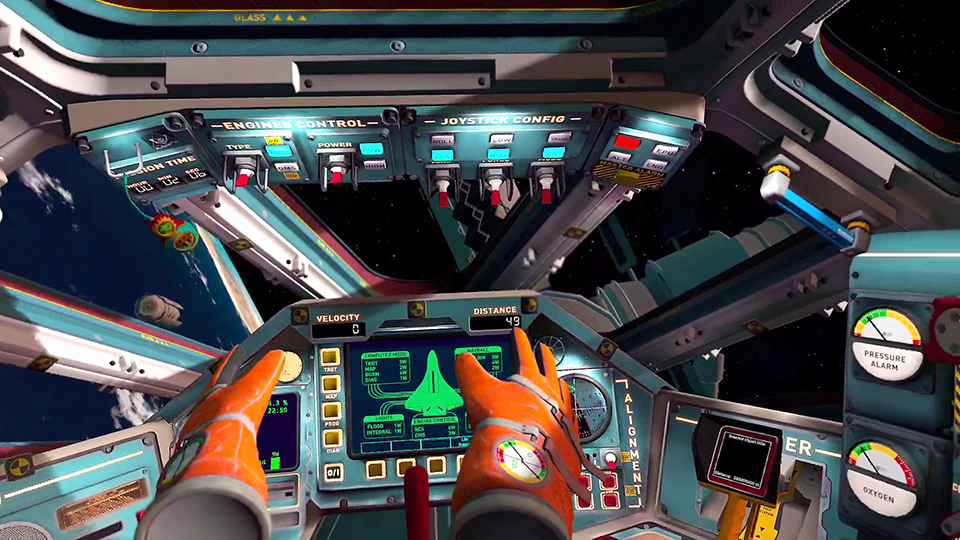 Everything in here is your responsibility.

This is a simulation seated experience with you playing from the confines of your 1-man space shuttle.  The chair you sit on is on rails so to navigate throughout your ship, you’ll have to pull yourself around using the handles at your sides and above your head.  You can jump right into the campaign or learn the basics in the rather lengthy tutorial and unless you enjoy death, I recommend that as the game has an array of mechanics that you’ll need to be familiar with to survive.  Managing air supply & toxicity, balancing power consumption, flying the shuttle, replacing air filters or breakers are a few of the chores you’ll have to pay attention to and that’s just to keep you alive as each mission in the campaign supplies you with additional goals to accomplish that involve navigating around the Earth’s orbit.  Needed items are typically stored in safe cubbies but for quick access, sticky pads have been placed around your shuttle that let you attach just about anything to them and can be easily grabbed. There are currently only 3 missions and the tutorial to play through with each mission comprised of smaller tasks and while that may sound short, it took me around 4 hours to get though it all though I had some issues.   For those that have played VR puzzlers like I Expect You to Die or A Rogue Escape, the stationary(ish) nature of surviving the events happening around you will feel familiar though with extra movement and stations available here, this feels more…real and depending upon who you are, that will either be a good thing or a bad thing. 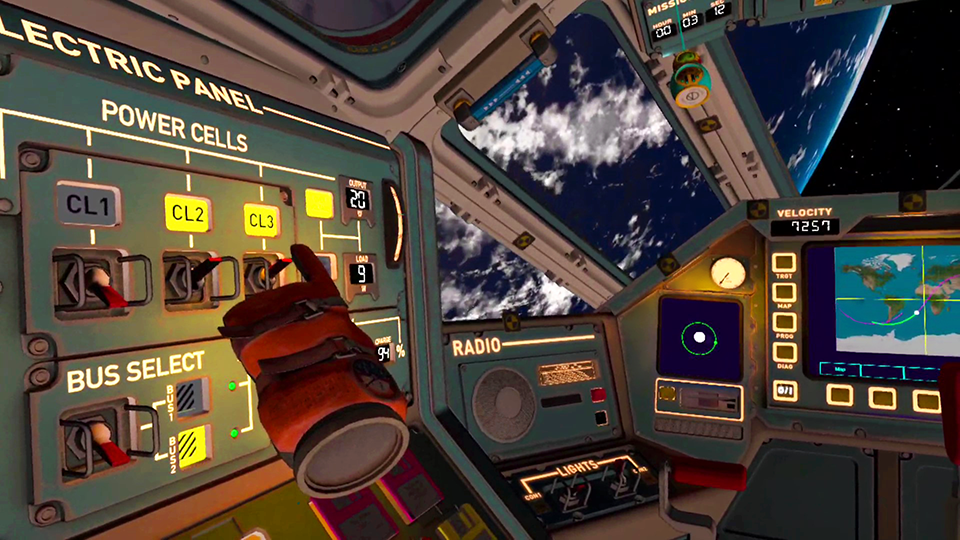 Keeping the power cells charged is always a challenge.

Interkosmos 2000 looks good, though because there isn’t much going on outside of your shuttle besides a view of space, Earth and the occasional space station or satellite, don’t expect to be blow away by your tiny cockpit.  Buttons, dongles, switches and dials populate your play space and the attention to detail on everything does make this feel a little more sim than it is.  When things are running smooth, there is very little to worry about, but should you not be paying attention or something decides to break, it’ll be on you to take in your surrounding to ensure you can fix a problem before it gets bad enough to kill you.  A red alert klaxon will be to your right, signalling when trouble arises though depending upon what else you may be dealing with, it can be all to easy to ignore in favor of a more pressing issue.  Some dynamic lighting is in use so as you orbit the earth, you me see some shadows cast by the sun or have your shuttle interior darken as you drift in front of the planets dark side adding small touches to the realism that go a long way.

Headphones are an absolute must here with the 3D audio being key in finding errant issues like a leak in the hull or pinpointing a busted breaker just a little quicker. There is no soundtrack to speak of outside of the menu, once again adding to that feeling of being all alone in space.  Throughout the tutorial and campaign, you’ll be in contact with both Russia and American Space Agency’s as they provide mission details, story and some brevity as they bicker back and forth with each other. 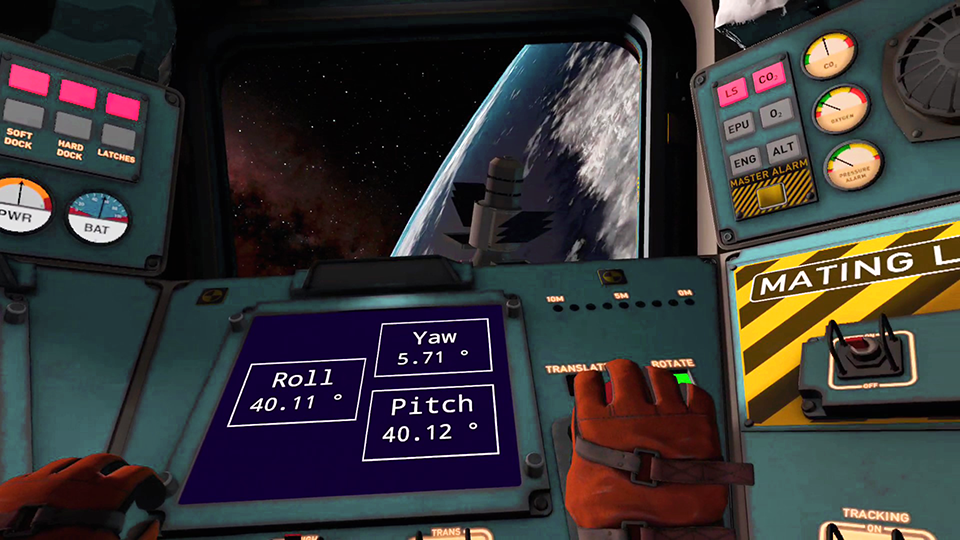 Lining up your shuttle for docking is no simple task.

Honestly, your appreciation for this title will depend largely upon your patience and whether you like stationary environmental puzzlers.  Games like Floor Plan or Last Labyrinth offer similar game loops, but with the addition of surviving on top of you assigned missions, this game also calls for a bit of patience and learning.  In fact, describing this as a puzzler isn’t quite right as it’s much more a survival game involving a fair bit of tasks.  Remembering to maintain all your various stations to stay living is one thing, but when I needed to fly, steer and dock my vessel, I found these moments to easily be the most frustrating, especially when the game is glitchy.   Finite movements may be needed from a vessel that’s just not so great at those tiny motions, causing me a fair bit of grief as I tried to reorient myself so I could line up my target adequately.  There are options to lock onto targets but when the sim side of this shows up, it can be maddening to try and follow the games guides.   Transferring from the front to the back of the shuttle always had me moving into the environment causing a black screen until I pulled myself into the proper position.  Warnings would happen when everything was actually fine and I was even locked out of some piloting controls during a section that requires precise piloting skills forcing a checkpoint restart to remedy anything that shouldn’t have actually happened. When it works, it’s fine and outside of the flight, I found the games mechanics to be fairly balanced but as I said, there is a lot to contend without including the glitches so if micromanaging a space shuttle sounds like your jam, then I bet you’ll enjoy this one, I just know it won’t be for everyone. 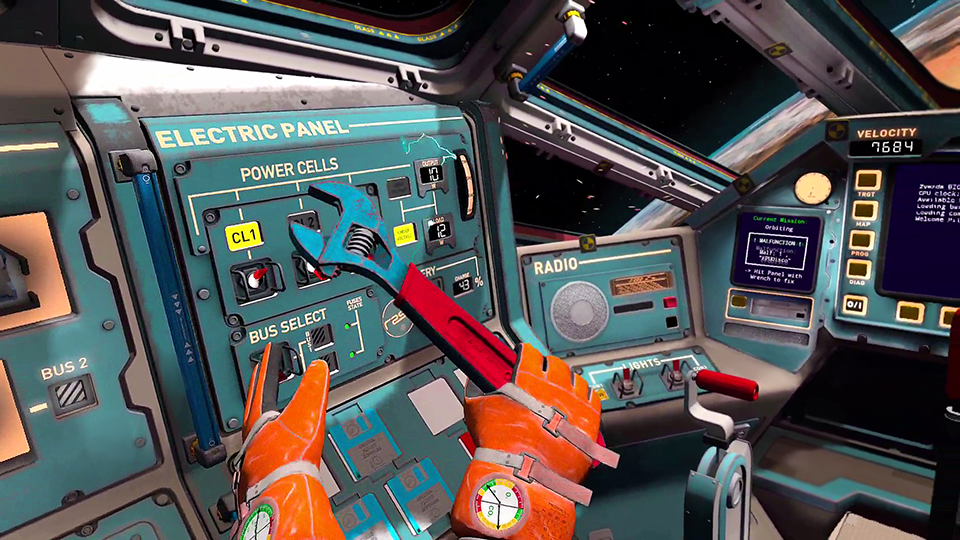 When in doubt, hit it with a wrench.

I typically enjoy games of this type, but I found Interkosmos 2000 to be just a little too much simulation and repetition for my personal tastes, and with those glitches, caused me a little more frustration than I like from any game.  That’s not to say it’s bad game, it’s just a title that requires a bit more patience than I have, or want, to give.

What would I pay? At 22.99 US for this, it’s tough to recommend in its current state.  I’m hopeful some of the bugs are squashed sooner than later and that the planned sandbox also arrives in a timely fashion as right now, $10…maybe $15 is as high as I would go for this.