The wait for After the Fall has been a long one with the 1st reveal happening over 2 and half years ago.  While Vertigo Games has made itself quite the name in the VR market as a publisher of many titles over the last 5 years, their only development credit is Arizona Sunshine, one of VR’s seminal games that released all the way back in 2016. In After the Fall, the world is facing a new ice age that followed the ‘Cold War’ in the 1980’s with most of the survivors moving underground to evade the freezing temperatures and the frozen terrors known as Snow Breed that now populate the surface.  It’s up to you, and your fellow survivors, to rid the surface of the frozen horde and take back the planet. 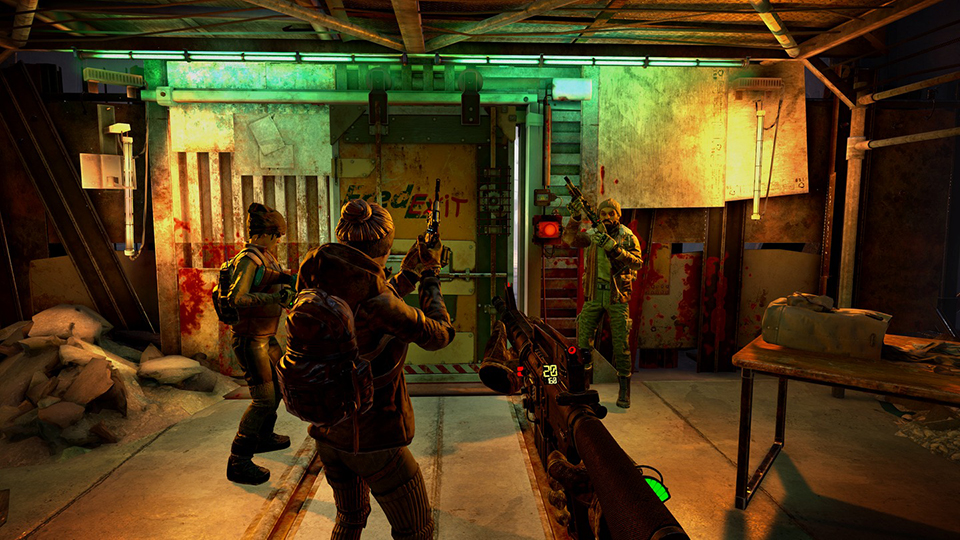 Every mission starts the same…before it all goes to hell

On any headset it’s a standard FPS dual wielding affair with smaller handguns as your initial loadout and more powerful 2-handed weapons available for purchase at the hub area, an old Metro Station referred to as ‘The Line’.  Reloading is handled in 2 ways, the traditional Arizona Sunshine method of ejecting a clip and bringing your gun to your chest or going the manual method by ejecting and grabbing for a new clip or magazine at your hip and pulling back on the barrel with the Advanced method rewarding you with more Harvest.  Comfort options abound with seated or standing play, smooth or teleport movement and click or smooth turning with additional height offsets, left-handed mode, whether you steer with your hand or head, weapon wheel as opposed to holsters, turn speed and a few more selections highlighting that Vertigo Games has been around for a bit and knows how to accommodate every VR player.  Harvest mode will be where you’ll spend a bulk of your time with each of the stages offering 4 levels of difficulty and more perks for playing on those harder settings.  In Harvest mode, you and up to 3 other friends (or bots) will tackle an area of the surface with the main goal being to get to the end while collecting as much Harvest as you can, which is what the enemies drop when you kill them.  Each stage has its own little mini story and must be played initially in a specified order, unlocking the next stage for replay once completed, and it’s best to do so as you can’t play with a party on a stage until you have conquered it yourself.  Scattered throughout each run are safe zones that let you resupply and spend your loot on weapons and items that will aid your efforts.  You can store an item on each wrist, typically a syringe or pipe bomb with a few more items found throughout each mission.  Syringes are used on yourself if you have low health or on any allies who are hurt or drop to 0 health and freeze, allowing them back into the fray.  Should you and your allies all freeze, you lose but should even 1 survive to the next checkpoint, the frozen members will be revived and can carry on once more.  Your wrist indicator showcases your health and amount of harvest you have collected, which can be spent during that run or at The Line, where you can also unlock new skins and mods IF you have found hidden floppy discs during a run, redeemed them at a safe zone and survived to the end.  It sounds like there’s a lot going on here, and I suppose there is, but once you get to playing, almost all the gameplay mechanics will feel familiar and are easy to pick up. 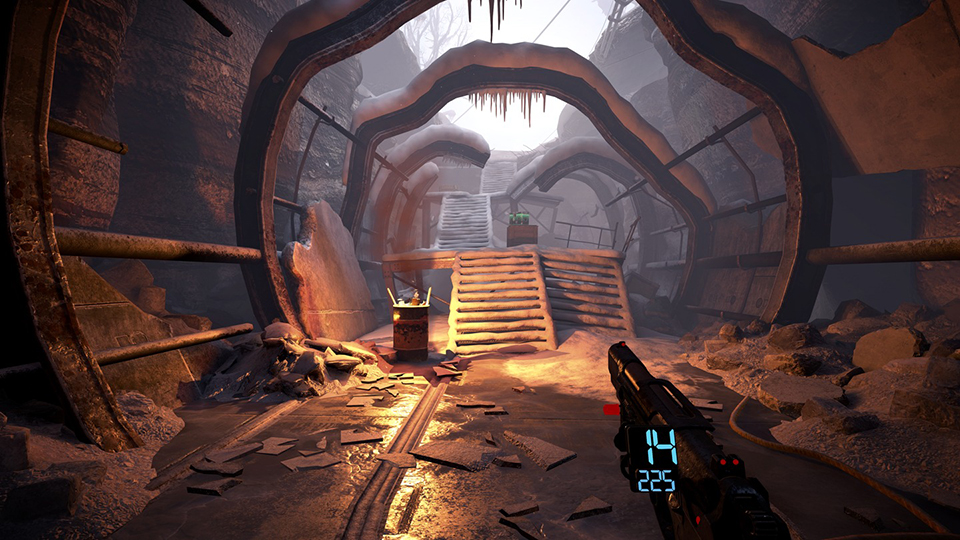 Welcome to the frozen surface.

Outside of the Harvest missions is a PvP mode called Tundradome (get it?) that pits up to 8 players in some team death match action.  At launch there are 5 Harvest maps and 2 PvP maps with the vs competitions levelling the playing field by removing all your custom weapons and starting each player off with the stock pistols.  Weapons & items are scattered around the environments and besides the opposing team, you’ll have to contend with the occasional Snowbreed, which show up and don’t care which of the living they get to kill.  What’s great about After the Fall is that no matter which headset you play this on, you can play with any other meaning any mix of Quest 2, PC and PS users can team up or square off in the multiplayer action.  On that note, while I did appreciate the PvP mode, largely because I didn’t even know that it was in the game, it does feel shallow and more tacked on than anything else and I would love to see more match types, maps and maybe even some type of progression system added, even if it’s just extra harvest loot, to help entice me to play it more or even at all. 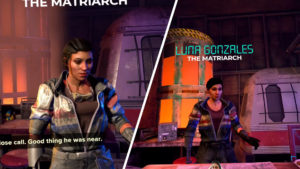 The Quest 2 version is a visual downgrade, but the gameplay remains intact!

After The Fall’s visuals look pretty damned good though depending upon the platform you play on, the quality of those visuals changes drastically.  On the PC (on max settings), everything looks great with the frozen world stuck in the 80’s despite it being 2005.  Each stage is littered with tons of finer details and items that hearken back to that decade of excess, ruined by the unending cold with derelict buildings covered in ice and snow.  It’s not all just wandering the wastes as you’ll be navigating through and on top of buildings, in subway tunnels, quarantine zones and a host more locales that all look fantastic.  The Quest 2 version suffers the most, reducing texture quality, getting rid of your flashlight while increasing overall game brightness and dumbing down the fidelity quite a bit, though thankfully the gameplay remains intact and the game still looks great considering the platform, especially when you factor in just how large of a game this is.   Enemies and NPC’s move well enough, minus some occasional jank, and when you square off against the next horde, it’s impressive to see just how many meat popsicles are on screen at any given time.   There are some awesome moments in here like when you zipline to the next building over massive heights, kill a horde and admire the blood-soaked snow left behind by your efforts or when you face the big bad guys known as Smashers, who tower over you, destroying just about anything in their path as they take an insane amount of damage.  The weapons all look as they should and can even be swapped allowing for members with stronger loadouts to help newer players.  You can even toss a bomb or syringe to your pals, possibly saving them from a dire situation.  It’s a good-looking game regardless of the headset you play this on and I don’t think anyone will be disappointed by the presentation in this one. 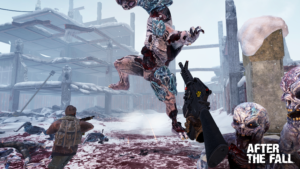 No matter which headset you play on, the sound design is on point thanks to an epic cinematic soundtrack that kicks in when the action starts and some solid NPC voice acting which will alert you to incoming threats.  Of course, the name of the game here is co-op and with voice chat being supported across all headsets, you can talk it up with your pals and pull off some coordinated defences when the frozen horde show up though I did experience some audio delay over the mic chat, nothing terrible but it did make for a few awkward conversations when people kept cutting each other off.  3D audio is on point with the screams of the Snowbreed highlighting which direction they are coming from with the overall audio package here being a great one that even throws back to Arizona Sunshine in a few ways.

I was actually a pretty big fan of Left for Dead, which is basically what this game is, only with its own unique story, art style and the fact that it is in glorious virtual reality.  Teaming up with 3 other players is an absolute blast, running & gunning though seemingly endless number of enemies.  Cinematic moments throughout the missions may have you fending off waves of zombies while waiting for an elevator to arrive or makeshift bridge to lower into position.  Enemy encounters will change up between each run, though this is much more apparent when you move around difficulties with the harder ones dropping deadlier undead in your path, making for harrowing situations when ammo begins to run low.  Ammo is scattered around the map in crates and lock boxes, some of which replenish their stock, but it’s best to get good when it comes to killing each enemy type efficiently because if your ammo does run out, you are in big trouble as there is no melee.  Each run will take roughly 30 to 45 minutes depending upon your crew and the difficulty you choose with the main drive to come back being to unlock those new weapons, upgrades and skins and try again on a harder difficulty.  This is where the games largest hurdle lies as you’ll be repeating the same stages over and over and for some, that will just wear thin with the initial play through all stages and dabbling in the PvP taking around 3 hours, maybe a little more if you play the twin stick Arizona Sunshine arcade game.  This is where the season pass kicks in offering up new maps to play in though, at the time of this review, it’s a little unclear as to the amount of content expected during each season as well as price and just how long each season may be.  Minor issues do pop up like the game not registering what you are looking at to pick up, often causing me to grab my holstered gun instead of a frozen dude’s pipe bomb, but these weren’t ever game breaking and after a few attempts, the game usually figured out what I was trying to do.  The hub is also a bit messy with 32 players (all muted unless you are in a party) all doing their own thing, which for some reason I guess means running around like an idiot, but really, any issues I ran across were nearly inconsequential as the game performed great on every platform. 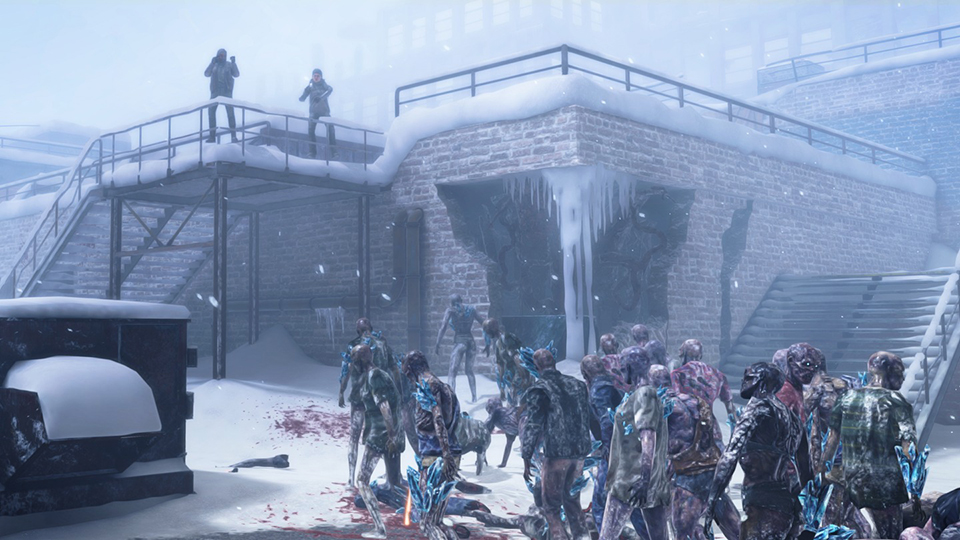 After the Fall is basically “Left for Dead” in VR, offering up an action-packed team-based shooter in a unique 80’s frozen world.  The replay factor is actually fairly high on this one and when you combine that with the multiplatform cross play and the promise of new content, there’s a decent amount to like now and there should be a lot more to like later.  It’s an ambitious title that delivers on all of it’s promises, making it one the coolest multiplayer experiences we have seen come to any VR platform, now just gimme more maps!

What would I pay?  This is $45 US and worth it provided you don’t mind grinding.  The presentation is great (especially on PC) and the gameplay is fun, addicting and very challenging on the harder difficulties.  It’s taken 5 years (to the day almost) for Vertigo Games to release a follow up to Arizona Sunshine and I’m happy to say, it was worth the wait!