If there is a genre of game that has been defined by VR, it’s the Stationary Wave Shooter.  When VR first launched, a cornucopia of these littered all the headset and with the amount being released seemingly on a weekly basis, it didn’t take too long for the best ones to pull away from the pack.   Guns n’ Stories has received a fair bit of praise since it’s PC release last year and now with the PSVR release we can see if this is ‘just another’ wave shooter, or something that may deserve a little extra attention. 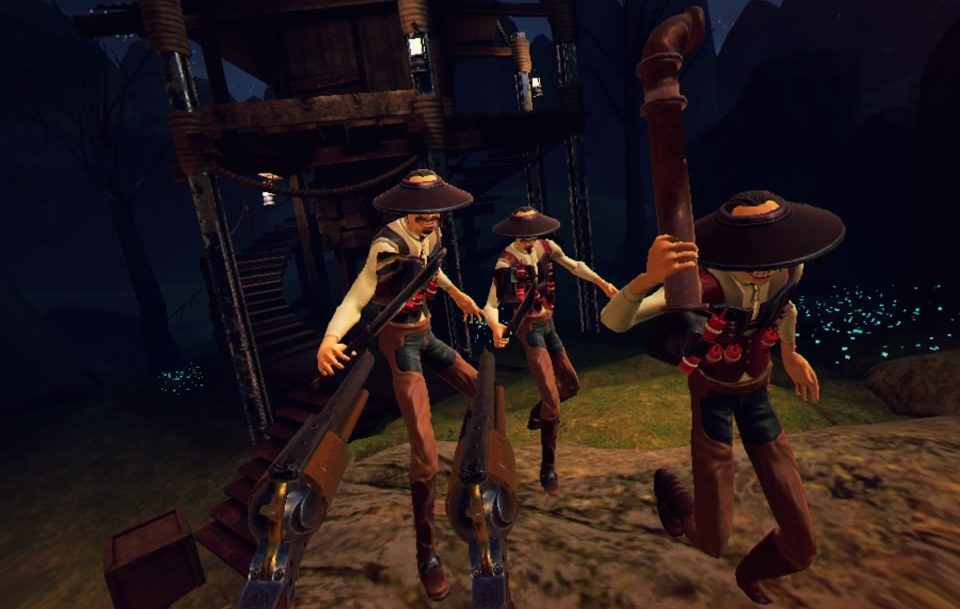 These hombres are lookin’for trouble

Typical of the genre, you need 2 tracked motion controllers as you will be dual wielding a wide assortment of ranged weapons.  Initially you start off armed with only a pistol and whiskey glass though it doesn’t take too long until you see a variety of weapons thrown your way.  Like the best wave shooters, it’s not just about unleashing all hell, but dodging incoming bullets and even deflecting them away from you and if you have some skill, back at the enemies.  Like Space Pirate Trainer and even SUPERHOT, this means you end up moving around the play area in a sort of slow-motion dance just to ensure you don’t get hit.  Should you take too much damage, dependant upon the difficulty you choose, everything goes black and white and time slows down, allowing you to recover and maybe save yourself from your current predicament.  You can still take damage in this mode and only a shot or 2 more will end your game, but more often then not when you enter the slow-mode, you’ll end up regenerating your health.  Enemies come at you from the front and sides, so you best keep your wits about you as you progress through the 9-stage campaign, you’ll encounter more deadly enemies and accrue some more outlandish weapons as well.  Once a stage is beaten you unlock the arcade mode for that level which lets you play through it again with any of the weapons you have unlocked from playing through the campaign. 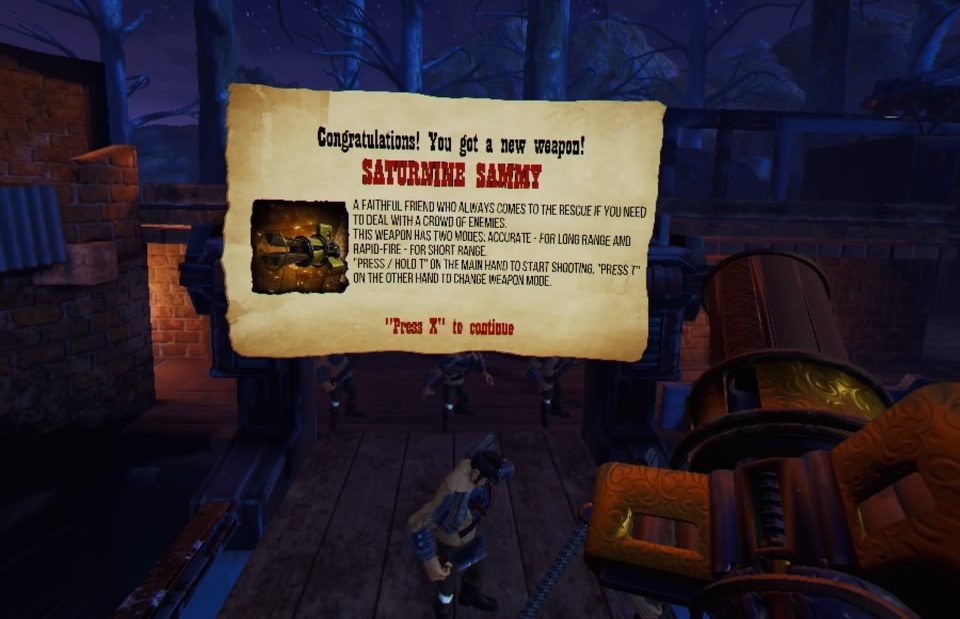 Between the PC and PSVR the game looks relatively the same, though a lot of fidelity seems to have been lost in the port to the PlayStation headset.  The PSVR version comes with a lot more aliasing issues with jaggies all over the game.  We’ve seen this before in many titles, but when looked at side by side, the PC version is the clear winner with even the color palette used having brighter tones due some kind of filter on the PS version dulling all the colors.  This is much more noticeable when comparing them side to side and I’m sure most PSVR users won’t even notice that.  The story is told through some flat cinematics as a child asks his grandfather to recount his days living in the wild west.  As such, the settings in the game take place in that era, though it’s clear from the onset that old gramps may be embellishing the story a bit as neon signs can be seen in the back grounds and later stages introduce enemy drones and a few other, historically inaccurate additions.  Levels will occasionally change up as grandpa changes his story, or when his grand kid calls him on his glorified lies, adding an overall sense of mirth to whole game.

The soundtrack is all very western themed with some more generic actiony music blending into the background.  The highlight is probably the narration as it is spread out before after and during the stages, fleshing out the story as grandpa continues to add more and more ridiculous content just to impress his grandson. 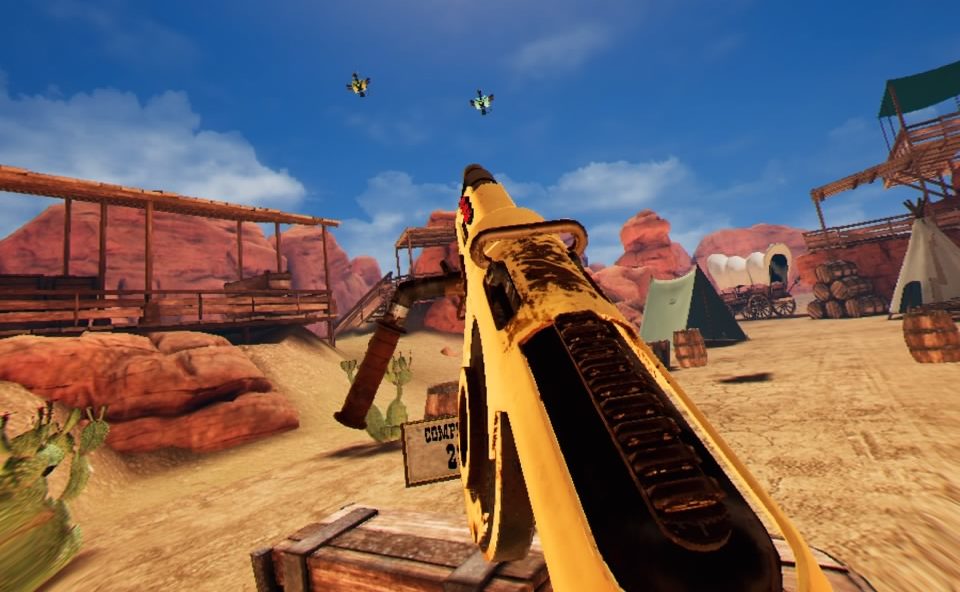 It wouldn’t be the Wild West without….drones???

Like other wave shooters, the biggest crime they tend to commit is monotony and Gun’s n Stories is no exception to that formula staple.  With only 9 campaign stages (plus some bonus content) it would seem to be a little on the shallow side, but most of the stages actually take a little too long.  Each stage has a sign with just how far you have progressed in the level in the form of a percentage counter.  The more I played, the longer I spent checking that sign after almost every kill and like a watched clock, it never moved fast enough.  Don’t get me wrong, the action here is fun, but in small doses.  Even playing through 1 level (3 smaller stages) just gets grating.  The weapons and enemy types do their best to keep things feeling a little fresh, but the bottom line is that this is a shooting gallery in only a few stages.   I also ran into tracking issues on the PSVR version, thanks largely to the way I want to naturally hold 2 guns.  Shooting forward works without issue but shooting to the far left or right forced me to stagger my controllers otherwise one would block the other from the camera causing that gun to go haywire.  It’s not game breaking but really interfered early on until I forced my brain to hold 1 arm lower, which was annoying to constantly have to think about.  Multiple difficulty levels are also available with anything above Normal being ridiculously hard so those looking for a challenge will find it here.  Should you die in a stage, you must start over from the beginning making it very unwelcome when it happens. 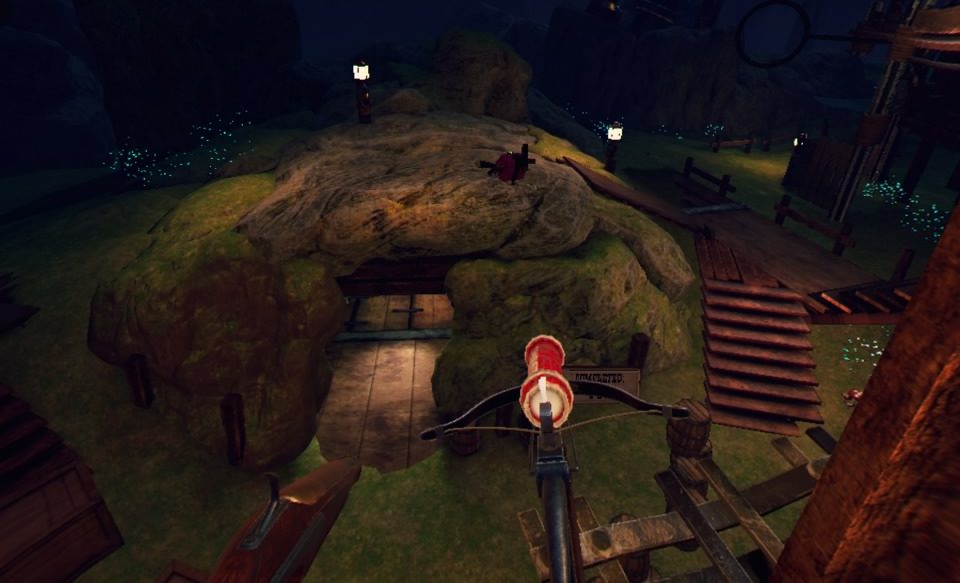 Next person outta that mine is in for a world of hurt.

Guns n’ Stories, on normal mode will take you in the 3 to 4 hour range to beat plus said bonus content which is unlocked after you beat the game and consists of some custom levels that once all 5-starred gets you a new gun in Arcade Mode, but like I said, it just gets old.  The gun play is solid, and I found the story telling to be amusing but I don’t think it does enough to really push it to the top of wave shooting pile leaving it enjoyable, but ultimately forgettable.   If you are looking for a good stationary shooting time, then Guns n’ Stories delivers what it needs too and includes some funny and charming moments that do separate itself from much of the rabble out there, but the action, even with the fun variety of weapons, still gets old way sooner then later.

What would I pay? $20 is fine for this if you can’t enough mindless shooting action.  I managed to nab the steam version for $10 which was a great price and given the over saturation of wave-shooters in VR, that’s about as high as I would go.

MIROWIN provided a PSN code for this title and, regardless of this review, we thank them for that!