You know that classic tale of the 3 little pigs where the wolf gets his comeuppance after harassing those little pigs. Well, in Wolf and Pigs that story has been flipped on its head and the pigs are the villains ravaging the landscape and destroying everything in their path. After killing all your canine brethren, it’s up to you as the big, not so bad, wolf to get revenge upon those disgusting boars. 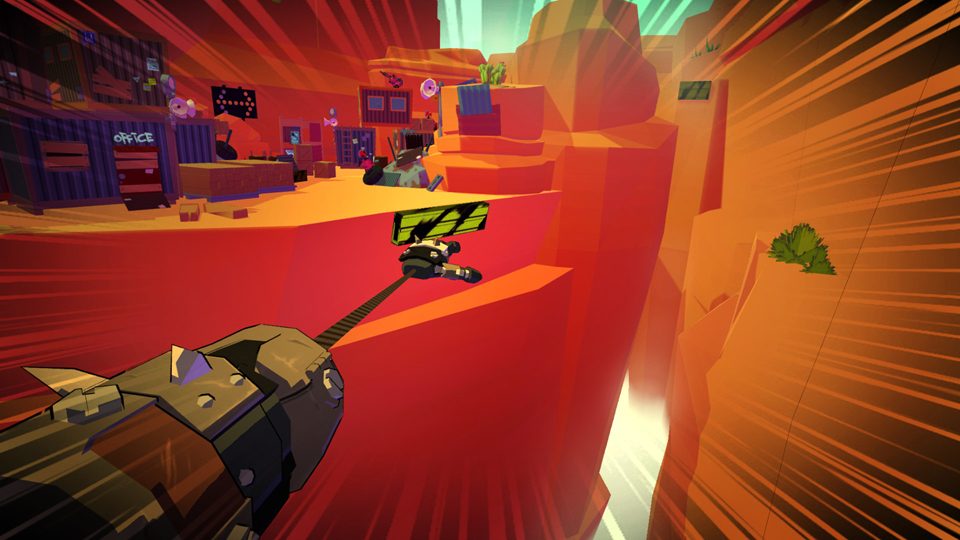 For those familiar with the grapple mechanics in Covert, this is almost identical and fairly simple with almost all your movement being handled by shooting your robotic arms at specific points around each stage. There are no comfort options to speak of, nor is their any in-game turn button save for enabling 45 degree turning in the steam settings so you really need to play this standing as you’ll be swinging 360 degrees around every stage. You can hot swap either arms hook shot type hands for pistols in order to fight the swine in your way with later sections requiring you to quickly swap back and forth as you travel and kill at the same time. Those pigs will more often then not keep their distance from you, tossing axes or firing arrows your way though occasionally one may charge you, so you need to be quick in taking those guys out. You have a health bar which can be replenished by food found in a stage or by killing stunned enemies with bombs found in nearby crates and in order to avoid said damage you need to dodge the incoming projectiles, which can get challenging if you stumble across a situation where those little piggy’s are surrounding you. Every stage ranks you based upon your performance and should you do exceptionally well and get that ‘S’ ranking, you’ll receive upgrades to your total health and the amount of damage you dole out. Additional weapons with limited ammo can be found in chests in each stage that require a key to unlock with many having a key right beside them while others are a little harder to find. You’ll progress through the 6-stage campaign with the game culminating in a boss battle against 1 of the 3 “little” pigs whereupon the game ends in a to be continued manor. 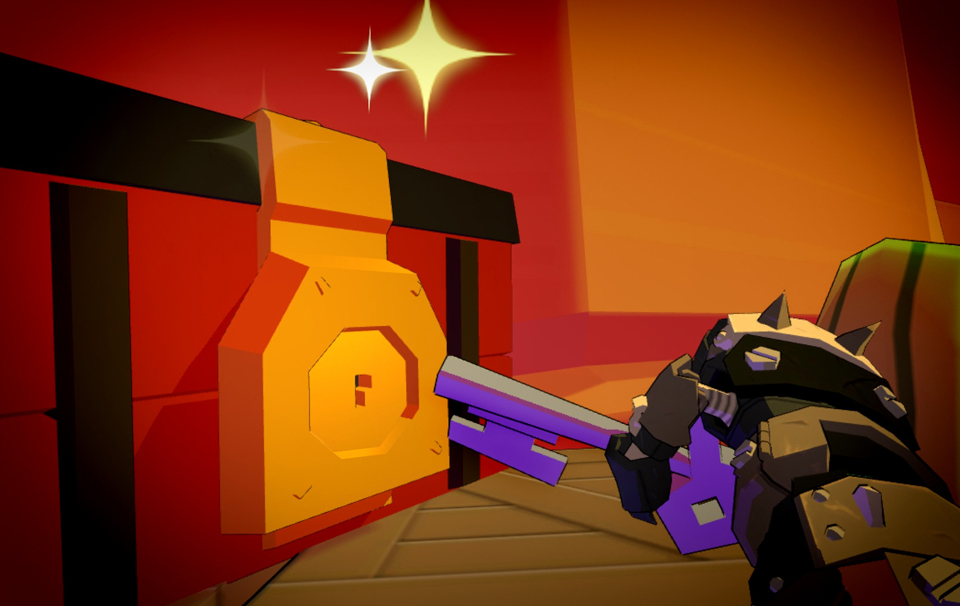 There’s always something good in the treasure chests.

Wolf and Pigs looks alright in the headset thanks in large part to the cell-shaded cartoon art style used in just about every aspect of the game. Character models are wonderfully animated and look great with everything being ridiculously exaggerated but still having a very fun and polished look. Environments can look a little stark at times but it’s a minor gripe as many times there’s always something small to grab your attention be it spray painted cliff walls which could indicate what’s to come to next or direct you to a hidden chest so while the environments can look a little flat, nothing in here looks bad. The areas you can grapple too are orange and black striped boards which you may not see until you travel to the next point with some environmental hazards thrown into the mix to keep you on your toes like falls or some errant traffic. At the beginning of each stage are overly lengthy cardboard cut out scenes that are somewhat charming at first but soon where out their welcome as they tend to drone on and on with very little entertainment value besides just adding some exposition. Overall, the visuals at play are charming, but nothing in here is overly impressive, getting the job done and not much else. 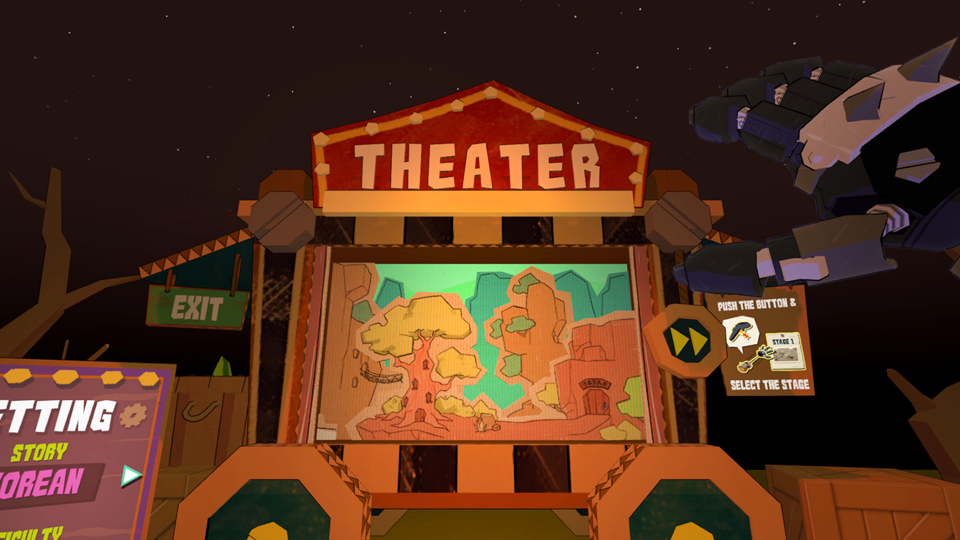 These scenes tend to go on a little long.

During the stages, the audio is on point with some fun generic music tracks that play over top of the action. Sound effects are just as good whether it’s sleeping pigs, the sounds of a crane, huge boulders of garbage barreling toward you and anything else that comes your way. My one gripe with sound in here is those cut scenes which are voiced well enough but the script in these segments is so dry and they go on so long that only after a few stages I was more bored by the narrative then anything else.

I enjoyed the first few stages in here and while I wasn’t overly impressed by anything in particular, the presentation and mechanics were fun enough to carry me through to the final boss, Hachsen. It was here I realized just how important it is to get those ‘S’ ranks on each stage and get those upgrades as I could only take 2 hits before dying and my hand canons felt more like pea shooters as I barely chipped away at that giant pig’s health. Suffice to say, I died…. a lot and decided to go back and get those upgrades. Venturing back through those stages was nothing short of a breeze and as I accrued additional health and damage, so too did that final boss become easier. It’s unfortunate that the game doesn’t stress the importance of getting those ‘S’ ranked boost as they are necessary to finish this campaign. The grenade throwing is nothing short of abysmal as I was unable to throw anything more then a few feet, regardless of how I threw it making the mechanic to get more health a poor one. The checkpoint system can also be incredibly unfair and on multiple occasions I was forced to restart stages because the checkpoint started me off with the same amount of health I had when I had triggered it, meaning I was often near death when I respawned making me a very easy target. I was also shocked when beating the first of the 3 pigs was the end of the game and while there is replay value in getting those ‘S’ rankings, I expected more content. Each of the stages, once you are familiar with the mechanics, can be beaten in around 5 minutes or so giving this game somewhere in the neighbourhood of an hour to an hour and half to get through, which seems light. 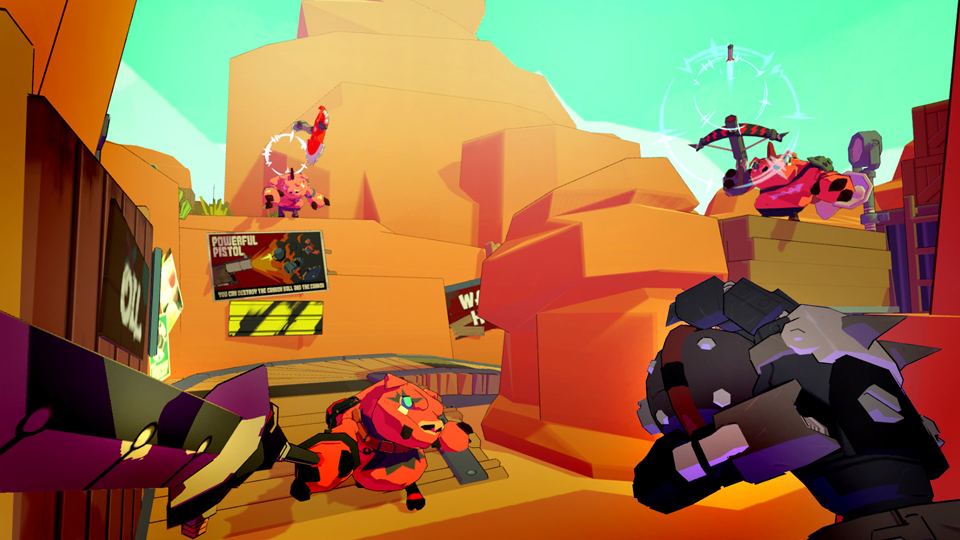 Wolf and Pigs isn’t a bad game, but it needs some balancing and TLC. The look and feel of the game is fine enough though the game just starts to feel repetitive after only a short while, and then doubles down on that repetition by forcing you to play through the stages you have already beaten. With apparently 2 more sequels in the works, I hope development team can address the issues I mentioned here as I did have fun playing this but was frustrated quite a bit as well.

What would I pay? This is $20 US and that seems high to me, largely due to the just how little content there is in here when you break it down. $10 would make this a much easier pill to swallow and allow me to forgive its many shortcomings.

Visual Light provided The VR Grid with a press code for this title and, regardless of this review, we thank them for that!