As much as I love looking forward to the next big thing in VR, sometimes it’s nice to take a step back and check out smaller titles that might lack scope and innovation but still aim to deliver on the fun.  Operation Serpens fits that description offering a stationary and on-the-rails shooter that places you in the role of a taskforce member out to take out the evil Snakes Organization.  Get your mission, grab your weapons, and start taking out the bad guys. 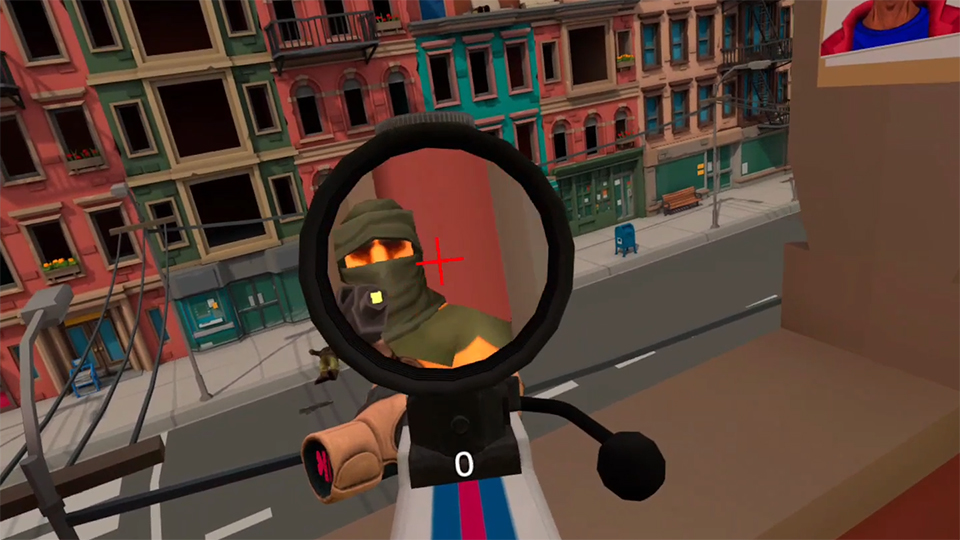 Sniping never gets old in VR!

The hub menu gives you a target range to play around with as well as which mission you want to select or horde mode which has you facing off against waves of armed zombies with dwindling weapon supplies.  No matter which mode you play, there are no locomotion options outside of click-turning which for the most part isn’t too bad as most of the action takes place 180 degrees in front of you, but in a few of the stages, enemies will surround you and you’ll have to rely on that or turning in the real world.  Choosing the campaign stages will have you apprehending or killing key members of the Snakes, getting your ever closer to head of the organization.  Many of the stages are stationary with you taking a position near your targets and having to dispatch seemingly endless amounts of enemies before finding or facing the big bad in that stage.  On your left wrist is your health and right has your percentage of progress with each stage supplying you with the weapons.  Ammo is infinite and reloading is handled by dropping your gun to your waist or pressing the A button to be reload.  Beyond your various guns are health pick-ups, riot shields, explosive grenades, & flashbangs, with the latter 2 being armed by pulling the pin with your off hand or pressing the A button.  Sorry, no pin pulling with your teeth, though you can store small arms in your mouth which is hilariously odd.  Flashbangs provide you with 10 seconds of time slow, allowing for some Matrix moments where you take out your near helpless foes.  When you aren’t stationary, you’ll be in a vehicle or navigating in on-the-rails action that you have no control over and will typically be assailed during these moments as well so it’s best to keep your eyes on your surroundings as enemy soldiers can appear from all sides. 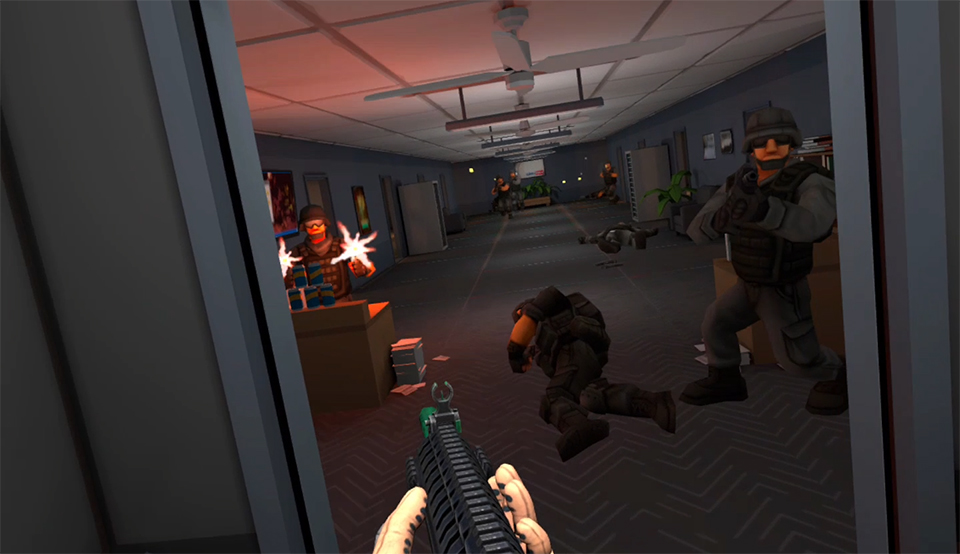 You’ll have to shoot and dodge at the same time.

Operation Serpens won’t impress anyone with its stripped back visuals so for those looking for intense realism, you may be disappointed.  What is here though still has a ton of charm thanks to its smaller roots as it still aims to be a larger game than I expected.   NPC models move stiffly and only carry a few animations with their blocky models looking more like cheap child’s toys than actual soldiers.  Lighting effects are non-existent with the overall presentation in here reminding me very much of the 1st Crisis VRigade, both in presentation and gameplay.   The first stage has you at a window across from an enemy’s base/apartment complex with the following stages having you navigate a middle eastern city, in the back of a van, in an apartment complex and a few more differing scenarios that mix up the action quite nicely.  You’ll face hordes of foes as they poor out of windows and around corners ‘Brolly Brawl’ style but each one only takes one hit (minus the bosses) so they are easy to dispatch but it’s also easy to get overwhelmed if you aren’t careful…or good.  The guns are nice and come in a surprisingly large variety as showcased in the horde mode which has you in a rundown part of town with all the games weapons laid out before and they all feel good enough with my favorite being the pistols.

3D audio is present but with the amount of chaos in any given stage or when enemies are just appearing before you, it became much easier just to look around than try and hear where guys may be coming from.  The soundtrack is only a couple of tracks, 1 playing when you get the level briefing from your commander and the other that plays during the shooting sections, but as the gunplay overrides pretty much everything else in the game, it’s easy to forget there is even a song playing at all with said guns sounding perfectly fine. 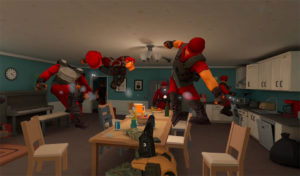 There’s no denying that Operation Serpens knew exactly what kind of game it wanted to be which is a mix of arcade light gun shooting and bullet hell with a few other fun surprises.  How each stage mixes up the action is a welcome treat that really kept me engaged for most of the game.   It’s relatively easy as you can take a ton of damage and with each foe only taking a single shot to kill, I definitely felt like a near invulnerable badass.  It’s not perfect by any stretch and I struggled to use two-handed weapons as how I naturally wanted to hold them kept pulling my second hand off the weapon making it much harder to use.  A few of the missions have targets you can’t kill which is fine save for one of the later missions which throws a ridiculous amount of enemies your way, than surprised me with a fellow soldier, who died by my hands as he walked out of a building and instinct (and game design) told me to shoot first and ask questions later forcing me to restart the stage, opening cut-scene included, which was a tad annoying.  There is a climbing mechanic that is almost never used outside of the tutorial making it near obsolete.  There is a comedy factor to many of the stages with enemies found dancing or doing #2 on the toilet and while that humor is a bit childish, I enjoyed it.  Horde Mode has attached leaderboards for those score chasers out there making the total package in here a decent one that delivers on classic arcade shooter action. 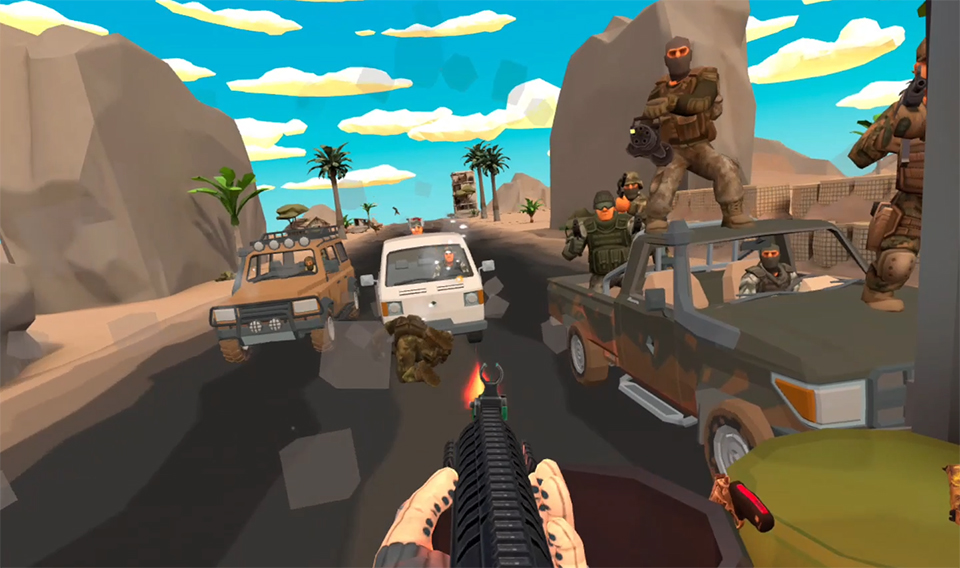 The enemies are near endless.

Operation Serpens is a simple VR shooter that removes any in-depth mechanics and just focuses on the action, and it was nice to just turn my brain off and shoot with reckless abandon at the waves of bad guys that came at me.  It wont blow anyone’s mind with it’s presentation or gameplay, but makes up that with some good (mostly) clean fun (headshots cause enemy heads to pop off their bodies) and a satisfying campaign for those just looking to kill bad guys in VR.

What would I pay?  This is $8 US and worth it. I was done with the game after about an hour and half and had fun the whole time.  Hard to ask for more than that.

GINRA-TECH provided The VR Grid with a press code for this title and, regardless of this review, we thank them for that!