This is one of the most top quality first person shooters currently available for Virtual Reality with realistic reloading motions, strong visuals, and focus on multiplayer action.  Why wouldn’t you want to play? There are a variety of game modes here as well (which I’ll cover individually below), a few maps, and 4 characters to choose from. 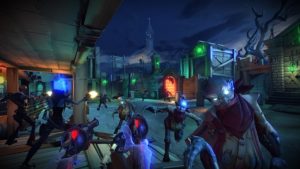 After start up you choose 1 of 4 character models with very limited customization, and pick your mode of play.  While waiting in the multiplayer lobby, or even at the main menu, you get to shoot at asteroids floating all around you for a fun little mini- game.  Occasionally the game just hung trying to find a match, though typically I never waited too long.

The game has a very unique style of reloading, with each weapon requiring a different motion to reload. A standard revolver pistol requires a flick of your wrists inward to empty the clip, then outward to fill it back up.  Another example is the Bow & Arrow, one of the most powerful weapons in the game. You hold the bow in either hand you pick the weapon up with, and press the grab button with the other hand and pull back, the exact way you would use it in real life.  All this means is controls here a tight and add to the immersion.

The cartoony, stylized visuals here are top notch.  The western setting mixed some science fiction elements give this a very unique feel.  Every character model and weapon carries with it a tonne of detail.  The Main Menu and Lobby screen also noticeably higher quality than you would expect and each map carries with it notable polish. The developers deserve a lot of credit for making this so good looking.

Every one of the four characters has their own personal voice that spouts one-liners throughout each match. The sound of every weapon pops and carries with it its own unique audio flare.  Every single action you do in the game has a corresponding sound that adds to immersion. Grunts and groans from the enemies, as well as explosions and other finer details just make this a joy to listen to.

The first game mode is “Target Range”.  Jump right into the gun and test all the various weapons at your disposal. Although it is just shooting targets, it’ll improve your accuracy, and you will learn how to reload the different types of weapons. Handy before you jump into the other modes

“Quick Draw” is the second game mode. The old western classic; draw your pistol at the countdown, while being stuck in one position, and kill the other opponent.  A fun game mode to play if you are looking for some more subtle gameplay that you can accomplish while sitting in a chair.

The third game mode is “Shootout”. A  2v2 or a 1v1 friendly fire enabled game-mode designed to keep your opponents from reaching the final score, which is determined by the host (ie. 1st team to get 10 kills).  You spawn in at a random location with various weapons by your side, lay down and crouch to try and avoid being killed first by the opposing team. This mode is very active and you need to be moving constantly to be able to win the match; a great workout and experience.

“Horde” is up next, co-op 4-Player game mode with purchasable weapons, health, and other upgrades. Your team only has a certain amount of lives until game over, so try not to use up all the lives at first as this can be overwhelming with all of the troll-like zombies running at you. You are stuck in one spot behind wooden barricades that the “Zombies” will attempt to penetrate and kill you. After a couple of waves you, will encounter a Boss wave with each boss requiring different strategies to kill them. Very fun and a personal favorite of mine. 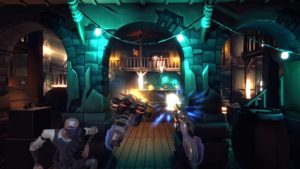 Get your shoot out in a western themed saloon!

Last but certainly not least, is “Robbery”. The classic game of “Cops and Robbers” where each teams needs to keep killing the opposing team in order to proceed to the next stage, the more stages you push through, the closer you get to victory. If you keep losing, the enemy team pushes you back stages, then you lose (think tug-of-war).  Accuracy is a big deal on this game mode since every kill is critical. Great team work is involved in here and this is definitely my second favorite game mode.

All-in-all this game is amazing and a must play for any Oculus Rift owner. It challenges your senses to listen and watch for the enemies and to be aware of your surroundings.  The unique weapon reloads and differing game modes make this crazy replayable, whether you enjoy killing the living, or the dead.

What Would I pay?  All that praise aside, $24.99 is a more reasonable price, it’s almost soley multiplayer.  I mean it’s free with Oculus touch activation so the listed price of $39.99, though high, isn’t really a factor as most people playing get this for free.  A must play for touch owners