If you hate animals than you will love this game.  Dick Wilde is an exterminator of pests and problem creatures, even if these pests include sharks, crocodiles and sword fish.  Armed with a wide variety of weapons, you are tasked with dispatching these creatures in wave after wave of intense action! 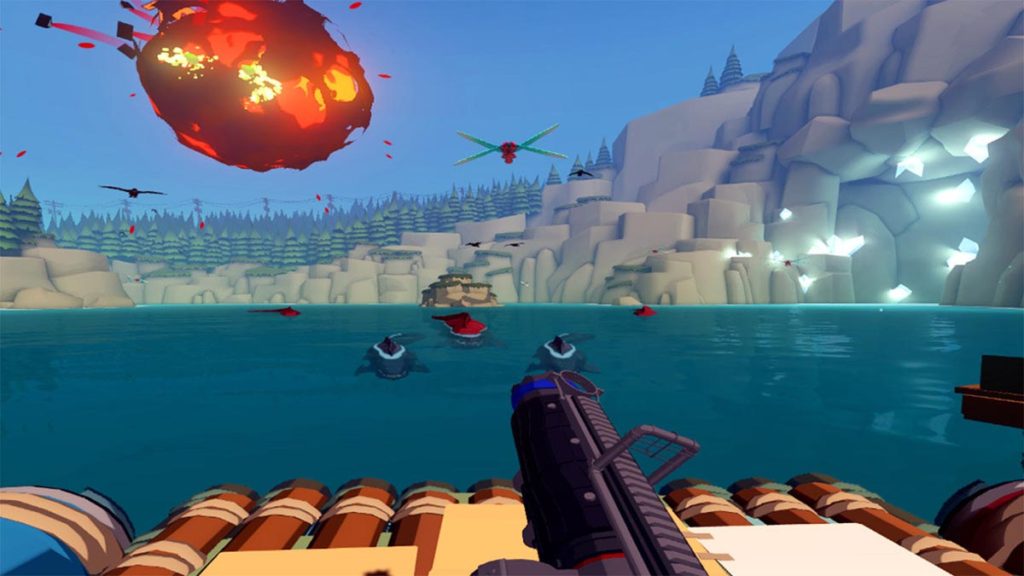 They’re coming right for us!

Utilizing either the move controllers or the aim controller is really up to you.  Each control method plays differently with move controllers giving you some fun dual wielding action or switch it up to the aim for some heavier firearms.  Either method works wonderfully, though I found that the dual wielding did seem to make the game slightly more forgiving.  This is a wave shooter, so your play area is a small boat and the enemies come at you from the direction of the PS camera.

The game is comprised of 3 areas with 3 separate levels each containing 10 waves of  fun, unrelenting action.  I mean that, even the less challenging levels will initially frustrate you, but stick with it and you will persevere.  Unfortunately, not all the levels are available at the onset of the game requiring completion of the others first before advancing.  After each wave, you are given the usual 3-star ranking and a choice of an assistant weapon/help, like an auto turret, explosives, or just a health replenishment.  After that, it’s basically rinse and repeat.

Where Dick Wilde shines is its wide assortment of weapons.  Each control method offers their own unique weapons ranging from hand guns, shotgun, paintball guns and plenty more.  Every weapon feels different and offers up its own feel so it’s best you try them all and find the few that fit your play style.  Many of the weapons have dual functionality so flip a switch and suddenly your harpoon gun is firing buzz saw blades instead.  Some of these weapons work great, other not so much.  The tracking is spot on with either control type and I no issues with that whatsoever.

I really like the visual style.  The cartoonish look of the game didn’t impress me that much, but the animation in the animals and the cell shading made everything look very fluid and natural.  The first time a shark or croc jumps at you is a pretty cool sight…and then you’re dead.  Still, the level of polish is remarkable with very crisp, very clear graphics and nice subtle details.  The audio, was more hit than miss.  I liked the banjo tracks throughout the game and the sound effects were great with animals and weapons sounding as they should.  The problem is the attempts at comedy, they just fall flat.  Audio recordings at the main screen asking for help aren’t’ funny, every time Dick shoots off a one-liner, it’s not funny and these repeat themselves pretty fast.  They aren’t awful per say as they do set the tone for this light-hearted shooter, they just aren’t very amusing.

There is a local multiplayer option offered up as well to get the competitive juices flowing.  It’s a quaint little addition that turns this into a VR party game, but it’s just a take turns playing the game mode and offers up no new features. 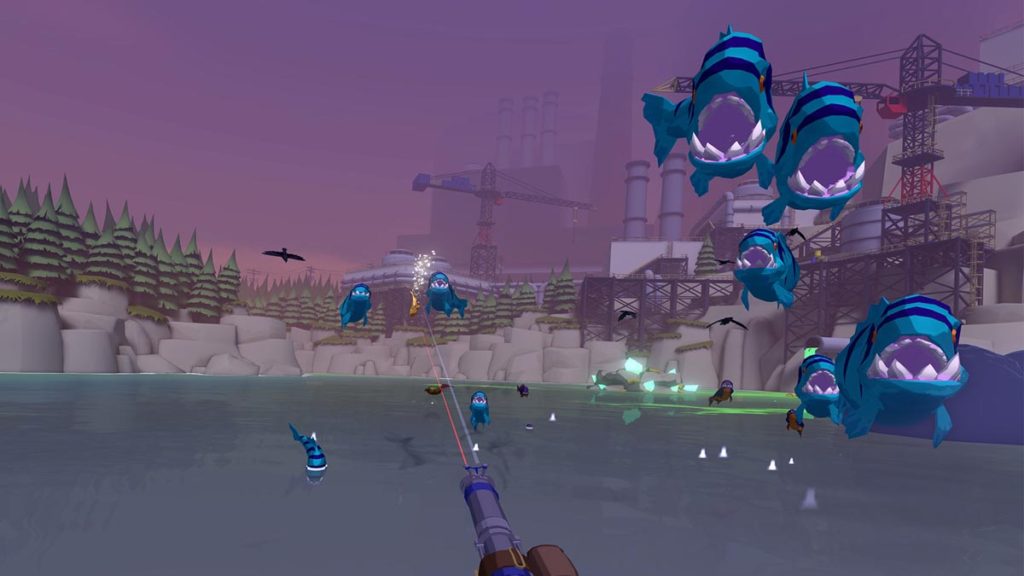 When the action gets this close, your probably not long for this world.

The biggest challenge here is just to get better, initial playthroughs will have you dying more than anyone would like, but practice makes perfect as someone annoying once said.  Stay the course and you be ducking and juking left and right dodging projectiles all while blowing attackers out of the water and air.  It’s fun and falling into a killing groove and narrowly escaping death at the end of intense stage is satisfying to say the least.  Some weapons will just frustrate you as well as certain enemies, but once you figure out a strategy and get your aim down, dispatching wave after wave becomes gratifying to the say the least.  Each stage has a boss battle as well just to spice up the action.

This is a wave shooter, and while enemies and levels change up a bit, you’ve seen everything this has to offer pretty quick.  Thankfully, it’s a competent wave shooter with a very refined shooting and tracking mechanics and a plethora of weapons and enemies.  If you’re in the mood for some mindless action, you’ll love this.

What would I pay? $15 US is pretty spot on.  It’s 90 waves of non-stop action and it’s pretty fun to come back too just to top your own personal best and…aim support!

PlayStack Limited provided theVRgrid with a review copy of this title and, regardless of our review, we thank them for that!