So, this game is nuts.  If you don’t know, the premise is this; you run a food truck that must cater to the seemingly undead, and once you feed them enough they turn into some very ‘flamboyant’ dudes and run off happy.  It’s a job simulator type game that has you preparing food for the undead horde as they walk ever closer toward you.  It’s a micro manager’s dreams and everybody else’s nightmare, but there is an undeniable charm and polish here that is sure to win over a few folks. 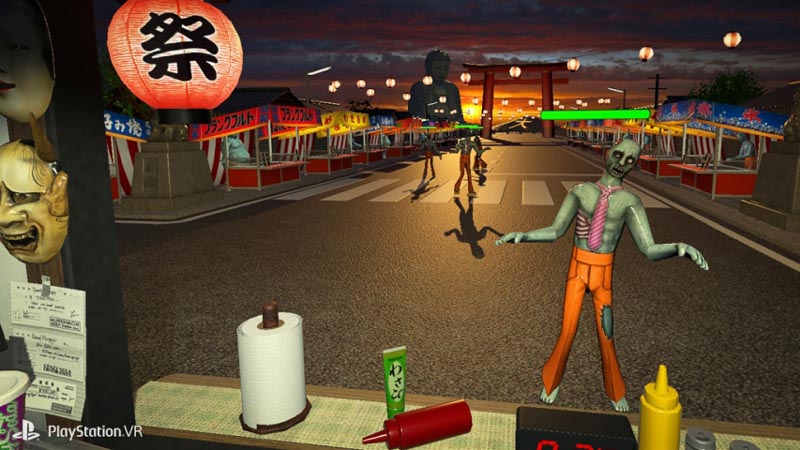 They came at dawn…

It’s Move controllers only and the tracking is spot on.  The tutorial mode shows you the basics, but once the actual game starts, there a few more options available as well some to unlockables. To your left is your burger ingredients, raw pizzas and fountain pop machine.  On your right is a grill, deep fryer and oven.  This game is a mad dash and if you aren’t constantly moving, then you are going to lose. Get those patties on the grill, fill those pops, pizzas in the stove and deep fryer frying some chicken and fries.  While everything is cooking you need to make the burgers stacked with whatever is available…literally.  If you can grab it, then you could put it in a burger so throw on a pizza or fries, mustard container…whatever you can grab.  As you serve these burgers up you need to make sure nothing is over cooking, and that you are refreshing those items that need be cooked lest you run out of food and still have ‘customers’ left over.  It’s insane and every level only gets progressively harder, but I’ll talk about that below. 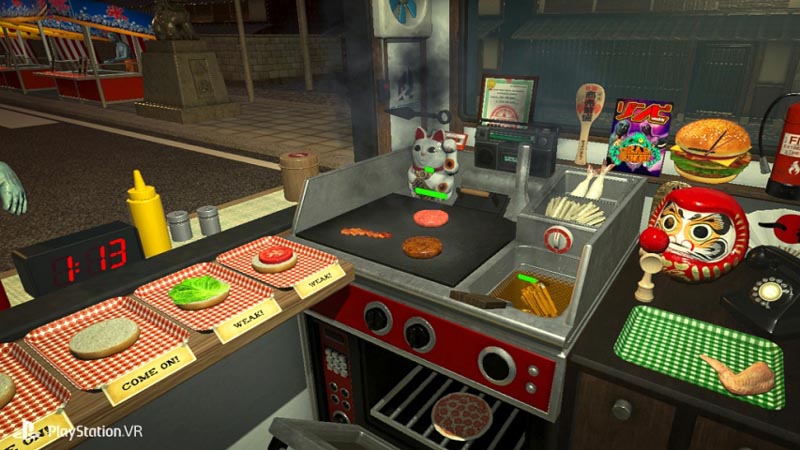 The further you get, the more items are at your disposal

Everything looks crisp here even though the art style may leave a little something to be desired.  The lone stage looks alright, peppered with food stands also run by Zombies.  Zombie models don’t look to impressive and as each type off Zombie has its own unique traits, you’ll see many of the same model over and over.  They all look shiny, which is odd, and most of the undead’s finer details lack any real depth and look like a jpeg was just mapped to 3D model.  While the details are unimpressive, the overall polish on everything looks really clear and vibrant, especially your truck, which is littered with your food making items other more random objects, unlocked through the 30-level campaign.

The audio is hilarious and I’m not even sure how to take it.  The opening moments greet you with a very aggressive metal track, that can be changed with few other tapes lying around the truck.  The tutorial had me laughing as well with the most white-trash looking dude who is your sensei and he talks to you with an over the top ‘engrish’ accent.  The zombies make cartoonish guttural grunts, groans and screams, and upon satiating their undead appetites, they change into very flamboyant, shirtless (just the men) characters who cheer than run off.  It’s absolutely hilarious what’s presented here honestly never got old to me…. it’s ridiculous! 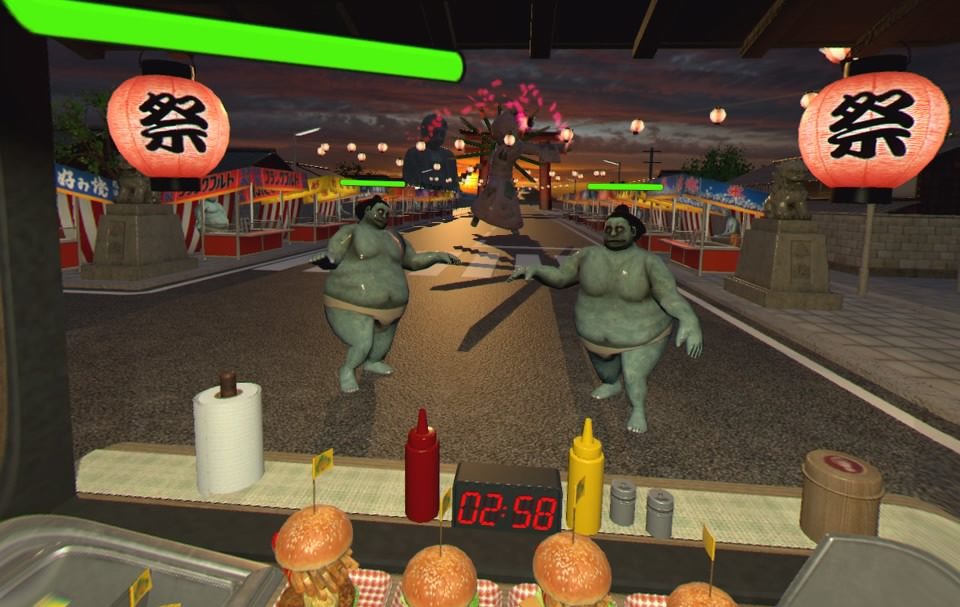 You better have a tonne of food ready for these bad boys!

Frenetic is the best way to describe what’s going on here. Even the 1st stage, as you try and get your bearings, has you rushing to feed these (not so) hideous zombies.  Every level increases in difficulty and even mixes up the action with level modifiers, like no meat, or zombies that move faster than normal.  You’ll see a whole bunch of these modifiers throughout the game, and while they do offer a slightly different challenge, they don’t change the game in any tangible way.

In fact, that’s probably my biggest problem with the game is that it never changes up.  Sure more zombies show up, serving options are slightly modified and you’ll encounter a boss battle (or 3) during the campaign but ultimately every level plays the same.  Get those patties on the grill, pizza’s in the oven, drinks full, deep fryer running and make those burgers.  You unlock items throughout the campaign which seemed useless until I accidentally placed one on a burger, which got me big points!  It’s a solid package, but at this point, I can only come back to the game for a round or 2 before I’m burnt out and tired.  The increased difficulty on the later levels too only adds to the panic of prepping meals and failure definitely leads to frustration and you’ll be wondering just how much more you can do during the level to survive.  It’s nuts. 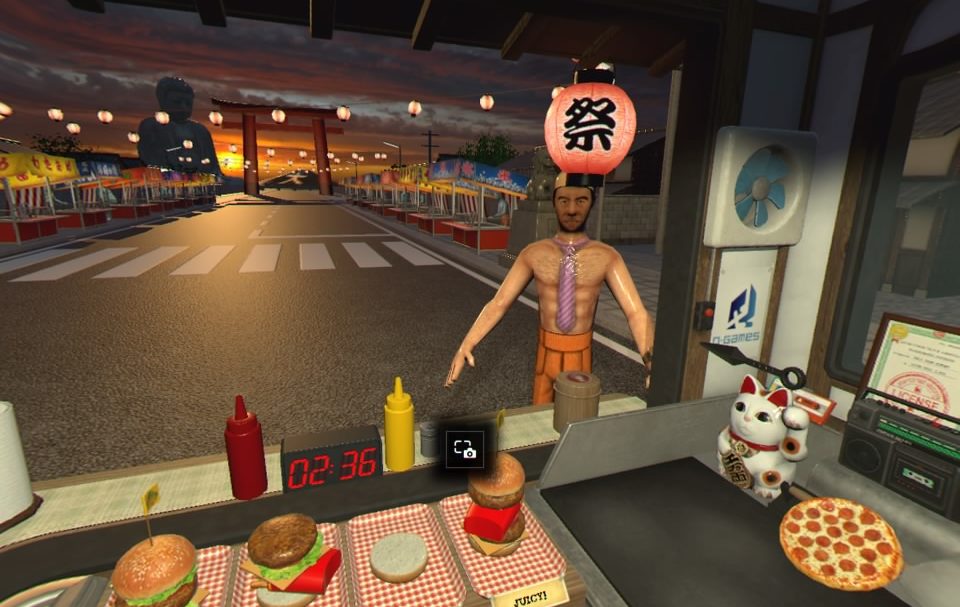 Whining’s aside, this is still solid and best played with friends.  Watching your comrades struggle to make burgers in VR is hilarious and well worth the price of admission.  It’s a simple game, but it relishes its simplicity.  While playing only a few levels may take there tole on you and you may quit in frustration, the games simple nature and challenge will call you back. I haven’t completed the game yet as I am stuck, but I’m not giving up either and can see my skills improving with every play.

What would I pay? $20 feels a tiny bit high given the content here.  The 30 levels will take you a few hours to beat, but the repetitive nature and difficulty presented makes that content feel a little inflated.  $15 makes more sense to me.