I’ll be honest, Disco Destruction really surprised me. Described on Steam as an arcade DJ game, one that sports basic cartoony graphics and came out of a long Early Access in December 2019, I couldn’t help but roll my tired VR eyes at what looked like yet another piece of VR shovel-ware. So it was with some surprise that I found a polished, original and highly enjoyable hidden gem that far exceeded my expectations. It’s the VR equivalent of a spontaneous weekday night beer with friends that suddenly turns into an epic night of clubbing! 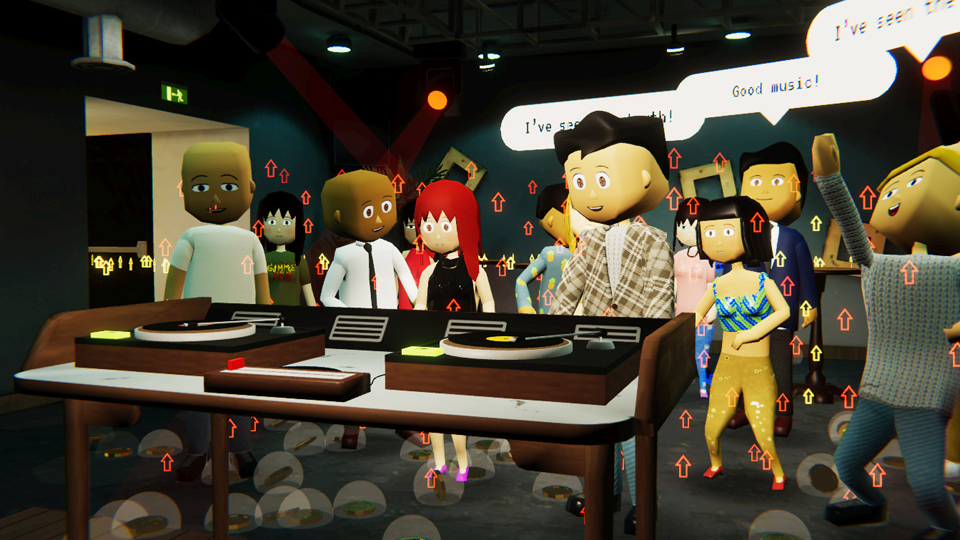 Keep the crowd happy at all costs!

You’re tasked with making money for a small club in Miami by doing your best Fat Boy Slim impression and selecting the right music, by picking up records and then placing them on turntables, to keep an ever-increasing crowd happy and dancing. The happier the audience, the more money you make and the more points you gain. You have three types of record to play – blue, yellow and red – and the audience show which mood they’re in via coloured arrows above their head. You also have a limited set of tracks and you can only play each track through once and have to ensure that when you transition from one-track to the next (via a mixer) you don’t leave any silence. Silence is the real enemy in this game and the crowd will react very badly if you momentarily leave them without any beats or run out of music.

It’s surprisingly tricky to make sure that you get to the end of your set without any moments of silence while still ensuring that you’re playing the correct type of music for the crowd’s mood. You typically only have a limited set of the more high-tempo dance tracks (yellow to red) and so you need to drop them at just the right moment. Once you get used to the game and start to role-play like you’re an actual DJ, it’s amazing how immersive and fun it is to try and deliver the perfect set; one where you start slowly and build the tempo before dropping a big banger at the exact right moment to really get the crowd moving, all while making sure the crowd stays happy and there’s no interruptions. I found that I completely lost myself at points, hands in the air and jockeying the crowd along as I built them up to a crescendo before dropping a big track to really make them explode. It’s a lot of fun and a pretty unique gaming experience. 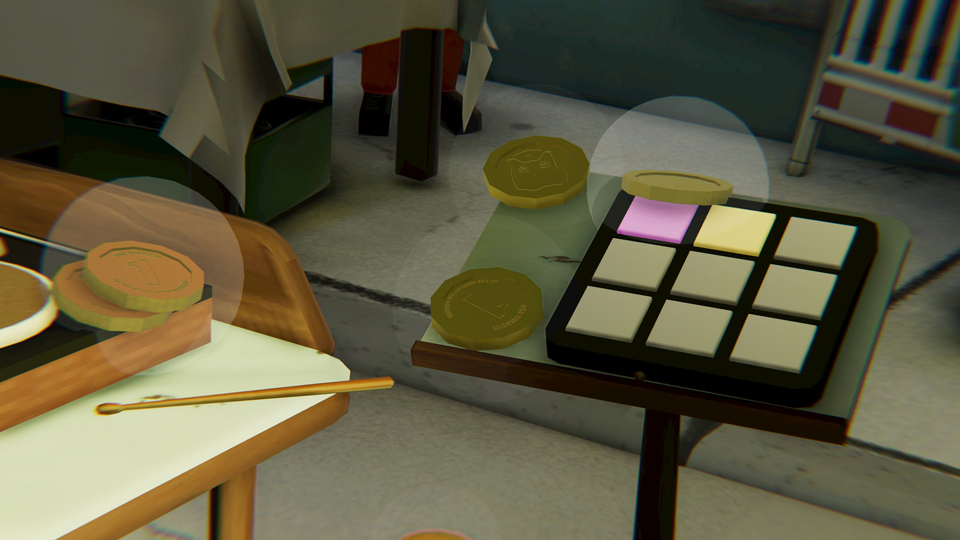 Use these tools to help mix your songs.

The ability to jockey the crowd along is helped greatly by a list of props that you unlock as you build up some money. The standout out prop for me is the microphone that lets you MC and generally cajole the crowd – it’s very funny to hear your voice electronically synthesised alongside the track and incredibly cringe-worthy when someone outside of VR hears you geeing up an imaginary crowd!

In a game full of surprises, another to me was how most of the records you get to play are really good. I’m a big fan of this type of house music and it’s refreshing to hear something a bit different to the typical EDM/Dubstep that you normally get in most VR rhythm games. There’s also a pretty large number of tracks to access and it works well to unlock them through the progression system. You can also add tracks from your own collection which works well and adds to the replaybility quite a bit.

The one area that I feel is slightly off is the strange tone of the game. The cartoon graphics and poos that the crowd throw at you when you’re performing badly (which actually is as juvenile, annoying and immersion breaking as it sounds) suggest a more kid focused experience but there’s (unnecessary) swearing throughout the game and generally speaking a club experience naturally lends itself better to young adults. 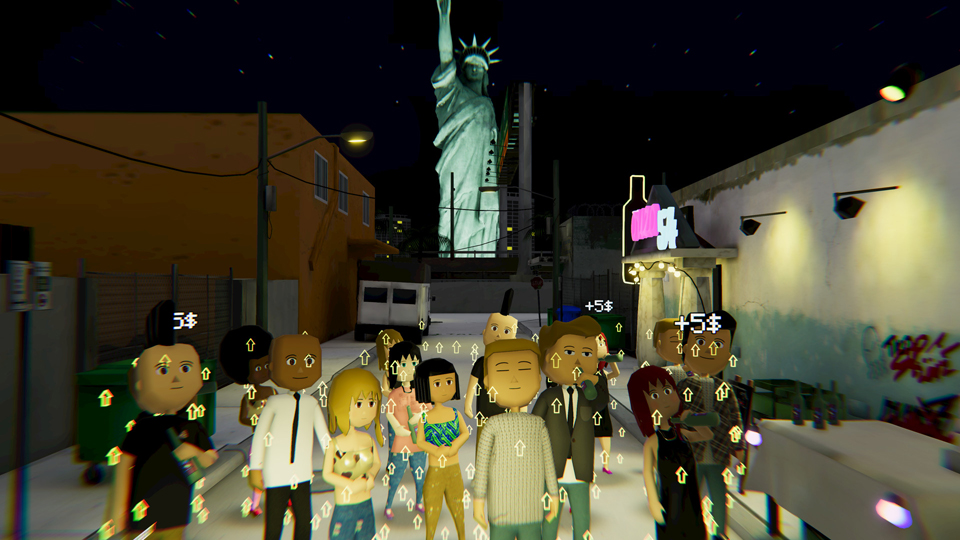 The longer you DJ, the bigger the crowd gets.

It’s also worth pointing out that as fun as the game is, it’s also fairly limited in terms of what you do and after playing for a couple of hours you’ll have seen most of what this game has to offer. I also think it’s slightly strange that the game is far harder when you start, when you don’t have any props and a limited selection of music. Once you unlock more tracks and props the game is significantly easier (and more fun). I also understand as well that the developers wanted to keep this game fun and accessible (it’s certainly not a DJ simulator) but I wonder if they could have included a mode where you do need to match the beats and timing of the music more when mixing – I think this could have been an awesome way to implement a harder difficulty.

Let’s be clear though, Disco Destruction is a real pleasure overall and while it is a bit limited it provides a really fun and accessible take on DJing in a polished package that offers exceptional value for money. If you’ve ever dreamed of living out a Super DJ fantasy, then Disco Destruction goes a surprisingly long way to making that a reality

What would I expect to pay? The game costs £3.99 which is extraordinarily good value. There’s a whole range of songs to play here and as already mentioned the game is a lot of fun and very polished. There are games out there that cost ten times this amount and don’t come close to the amount of content and fun you’ll have here. For the price of a cup of coffee this is a no-brainer.

Subjective Software UG provided The VR Grid with a press code for this title and, regardless of this review, we thank them for that!