Haunted house experiences have been a staple of VR with so many being released it’s hard to keep track of them all.  Layers of Fear looks to take that genre to a new level offering psychological terror unlike any other game as you piece together the horrific events of the house prior to your arrival. 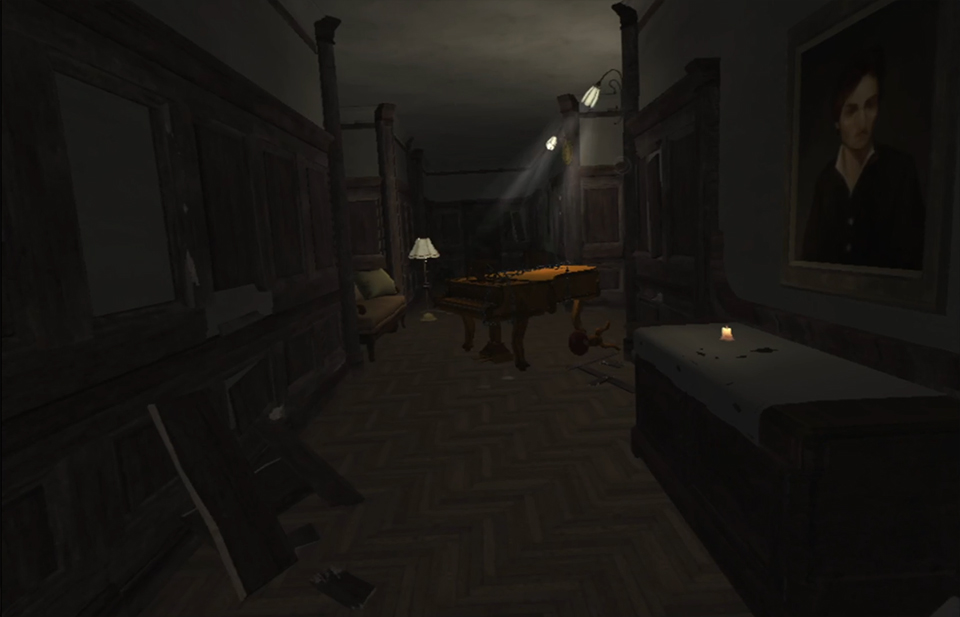 The house gets creepier the more you play

Layers of Fear is a game designed around suspense and terror but is a mostly passive experience as you explore this bizarre house.  On the PlayStation VR side, Moves are the only supported controllers and work well enough with a few comfort options in place to help those who get sim sickness.   Most of this game is just walking through the mansion, exploring every nook and cranny for items and articles that flesh out the story.  You can duck and run as well with the former being needed to grab items off the floor or open those lower drawers and the latter allows for a quicker run through the game, but can be too fast for the game, causing scares to happen as you are moving past them instead of ahead of you. You’ll encounter environmental puzzles that will require to find keys or items needed to move along and more complicated ones that will need you to be a little more observant as clues to combination locks will be nearby.  Each chapter is broken up a by a key item intrinsic to the plot and once discovered places you back in a room with a painting that slowly reveals itself with every new discovery.  Many of those discoveries come in the form of written articles found throughout the house and are pivotal in determining the games outcome.  There is an auto-save system in play that works just fine, saving often and once you beat the game, you can keep playing and to try an unlock 1 of the 3 endings available based upon the items found and events triggered during the game. 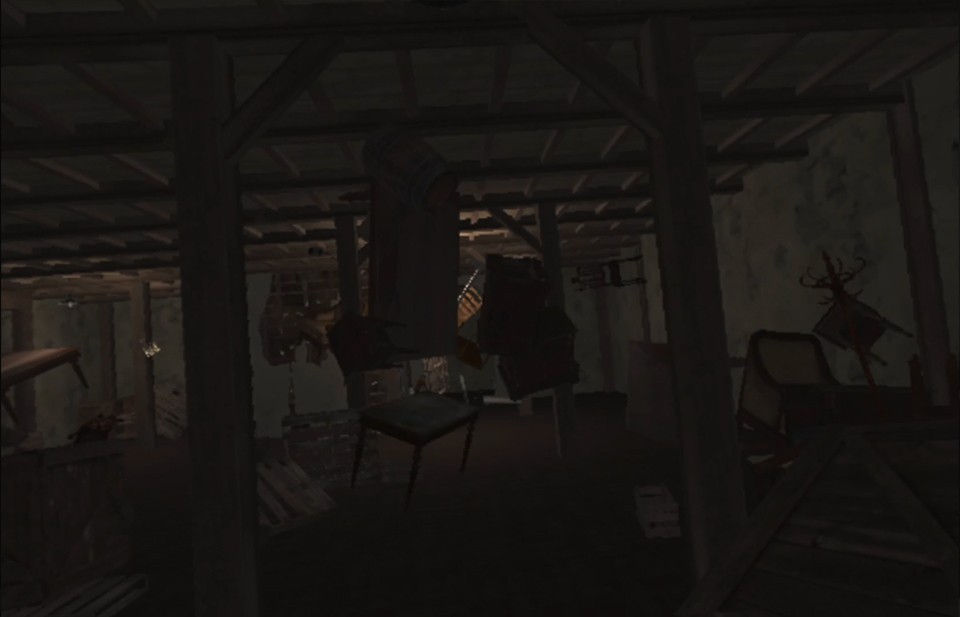 Where Layers of Fear shines is the mansion and the way it lays out scares and tension.  The first time I entered a room and turned around only to see the door I entered had vanished in place of a wall or hallway, I knew I was in for an unnerving treat.  Unfortunately, the conversion to the PSVR is a rough one with most of the game looking dull and bland with minimal lighting effects and lower resolution textures that do hurt the visual experience.  It’s not awful, but it’s unfortunate that this game doesn’t look as good as it’s PC or flat counterparts as that boost in fidelity would only amplify the tension in the house.  Regardless, the house itself is massive and a maze with every door possibly leading to any other room in the house with the scares coming in all forms. The house is in crazy disarray with disturbing art all over it thanks to one of the resident’s proclivity for macabre imagery.   Jump scares will abound as well as some more tense moments where walls may bleed or a ghost may be seen roaming the halls, but the best scares come in the form of the ‘visions’ which is an option that can be toggled for comfort’s sake but offers up an incredibly unique visual experience as your vision may blur, warp or skew entirely as you are assailed by haunting visions that may or may not be real.  The further you get in the campaign the more dramatic and intense these visions become, and I look forward to them and when my vision started to go a little wonky, I knew something horrific was about to happen.  As I said, it’s not visually stunning in any way, but the game design and pacing in the scares along with the constant level of tension make this one of the freakiest games I have played in VR. 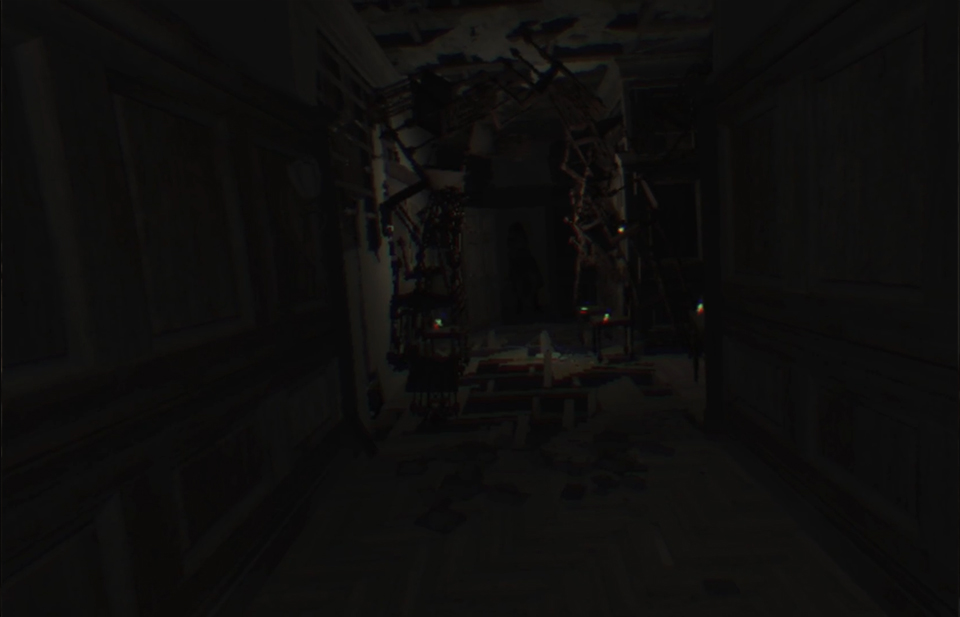 You probably shouldn’t talk to her.

Where the visuals suffer, the audio does not and this NEEDS to be played with a set of headphones as there is a constant barrage of subtle and not so subtle effects and music that follows you throughout the house.  From the sounds of crying babies, screaming ghouls, rattling doorknobs and slamming doors, what’s here may be familiar too horror junkies but works quite well at keeping the player uneasy.  There is a little voice acting, typically triggered by getting those key items and I found it to be delivered quite well carrying with it some decent emotion surrounding the tragic story of the house.

I was pleasantly surprised by Layers of Fear as I honestly wrote it off as being nothing more than a glorified walk-a-thon in a haunted house and while it is exactly that, the unique scares and overall tension had me enjoying this way more than I expected.  The presentation is definitely the largest knock against this, but the gameplay does it’s best to counter the lacking visuals.  I wasn’t aware of the multiple endings until I happened across a guide online and to get any of the 3 ending requires some obtuse choices that don’t seem like choices when you play.  One of those is to pick up the documents I mentioned, which is fine but in order to do this you’ll have to open every drawer and closet to ensure they don’t have anything and most of the time they don’t and in my play, after about an hour of searching everything, I just gave up as it was nothing short of tedious and unrewarding.  After my single play…roughly 3 hours, I was done with the game and cared little about the alternate ending as I was satisfied with the conclusion I unlocked. 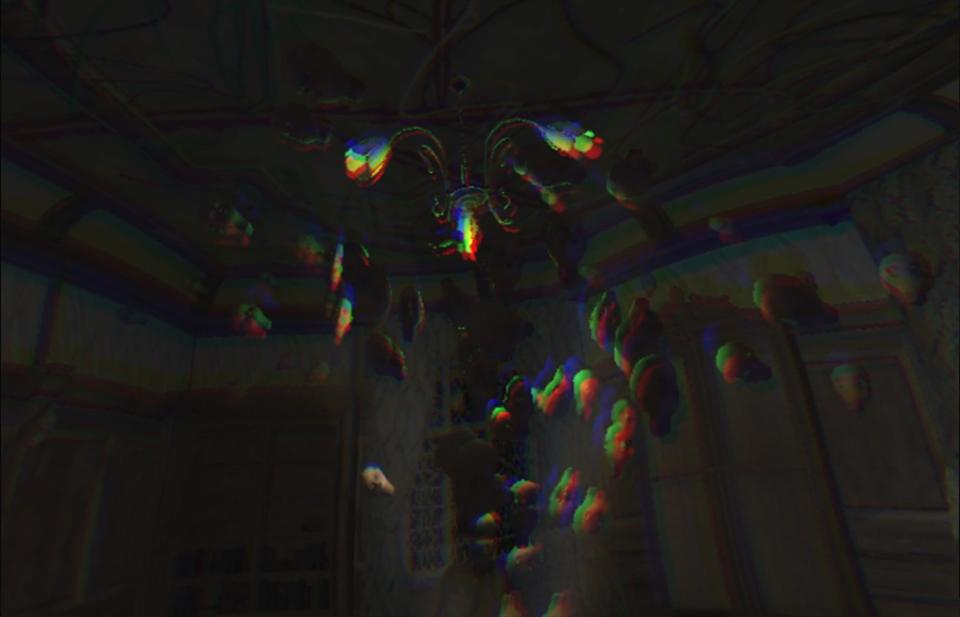 The visions get very trippy

Layers of Fear delivers where it needs to be a satisfying and scary horror title.  The story takes some dark turns and while it does tread familiar territory regarding the narrative, I was happy with how everything unfolded.  If you have enjoyed past horror title like Paranormal Activity or Exorcist: Legion than this fits in right with those titles but offers some next-level scares in the form of the visions that separate it from the rest of the horror/suspense pack.

What would I pay?  This is $20 US and worth it for those that are looking for a good scare.  The campaign is addicting, and the game constantly surprised me and only gets more bizarre the further you get.

Bloober Team provided The VR Grid with a press code for this title and, regardless of this review, we thank them for that!