Space Channel 5 is a franchise that has been around for 21 years and has seen releases across Sega, PlayStation and even a Nintendo handheld though the last entry to this franchise was in 2003.  Space channel is one of Tetsuya Miziguchi’s earlier works and for those that might not recognize the game, he’s the man behind games like Rez: Infinite and Tetris Effect along with many other non-VR titles though, as far as I can tell, he has nothing to do with the latest installment in the franchise in Kinda Funky News Flash!  Unlike its predecessors, you don’t play as franchise lead Ulala but rather an upcoming reporter who must follow her lead as some crazy dancing aliens attack the populace and the only way to stop them is of course…dance! 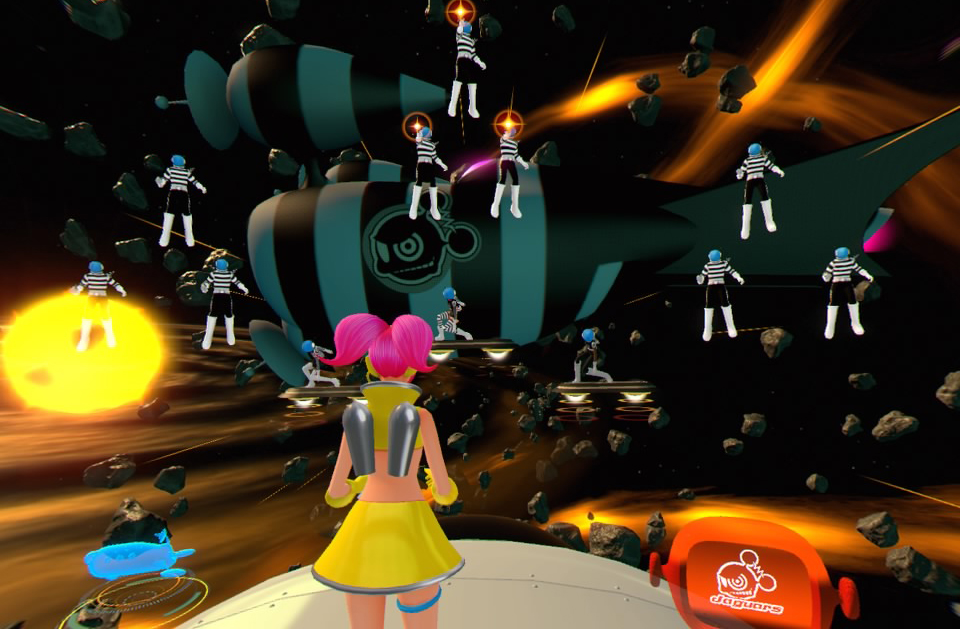 Move controllers are a must as the game tracks your hand motions through 15 different dance moves.  The 4-stage campaign showcases some of these moves though to perform all of them, you’ll have to play through the story and unlock Trials mode.  Ulala will be by your side through a bulk of the campaign as you square off against a variety of dancing opponents.  In a game of monkey see monkey do, you need to match the actions of the aliens in front of you, sometimes just to repeat them and other times to dodge or unleash an attack against your foes.  You’ll have to reach to your sides, up high, down low and punch forward with either or both hands as well as a few more intricate moves.  It’s actually quite fun and engaging and as a guy with next to no rhythm, I never once completed any stage on the 1st try though others with a little more groove then I should blast through the main missions in 45 minutes or less.  If you screw up 3 moves in a row you’ll have to restart the mission from it’s onset, cut scene and all,  and the more accurate you are the better your performance will be, which is measured by viewership on a TV screen at your bottom right giving you a small reason to return to best your previous efforts.   Also “hidden” in each stage are small circular icons that briefly appear in front of you and must be touched before they disappear and once again, give another reason to return the stages should you miss some of them on your 1st go.

Beyond the campaign is the aforementioned Trial mode which labels itself as 100 dance challenge but is actually 10 songs lasting no more then 10 minutes and expands upon the campaigns dance moves.  You can play in arcade mode which is the campaign minus the failure aspect and just scores you upon your performance in each stage.  A calorie counter is here as well though unless you put a lot of extra effort into your moves, I don’t think this will be as much of an exercise tool as BOXVR or Beat Saber.  Dressing Room let’s you view Ulala in 1 of 3 costumes which are nothing more then color palette swaps.  Friendopedia  let’s you view all the characters you meet in the game as well their bio’s which are ridiculous, but amusing.  Lastly would be the viewing mode, which let’s you watch the campaign from one of 3 different views which I mean….I guess…..sure??? 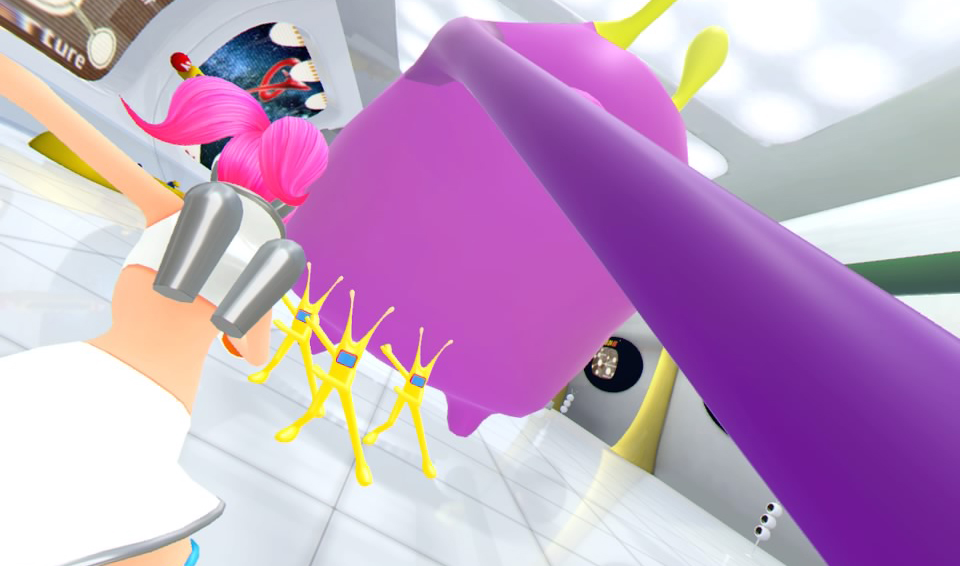 Dodging this alien’s punches in VR was fun.

Visually, Funky News Flash hasn’t seen a ton of enhancements from the Dreamcast version save for some general polishing and resolution bumps with the bright colors and basic textures popping in the headset.  Character models look fairly dated occasionally having very fluid animations but mostly having stiff and repetitive motions that do make this feel more like a port from a 20-year-old game then a more modern chapter in the franchise.  You’ll dance-off in a space station, space ship, in an asteroid field and in a large neon hall with each offering unique visuals with some stages having objects you need to avoid via choreographed dance moves, which was a VR highlight as it’s quite enjoyable to watch a giant aliens fist fly just overhead.  What it lacks in detail in makes up for in clarity and while nothing in here is really that impressive, it works as a throwback title and skirts the lower resolution of VR headsets.

A variety of custom tracks are available here with the genre being some kind of odd mix of upbeat jazz and pop with a 1960’s flare which matches the look and styles of just about everyone in the game.  Some songs actually feature conversations to the beat which for myself came off as more awkward and forced then anything else, especially in the final level, and I honestly could’ve done with a better way to push along the ‘barely there’ story.  Dance queues are said out loud be it ‘right’, ‘left’ or ‘chu!’ which means punch forward with the Trials mode expanding upon the move set with more ridiculous audio prompts.  It’s all done in good fun though and fans of the franchise should be happy to see that not much has changed over the years.

The gameplay and dancing prompts are perfectly fine and fun but the short campaign is an absolute killer and while there is replay value here, that assumes you don’t mind listening to the same songs and watching the same cut scenes over and over.  Throw in the more then forgiving position detection and once you familiarize yourself with beats, there really isn’t much challenge in here either.  The story is little more then those disjointed cut-scenes and the tedious ‘talking to a beat’ conversations and is really nothing more then an excuse to put you in a new setting.  Beyond Trials mode, all the other ones are redundant or only offer a handful of seconds or minutes of extra content meaning as it currently stands at launch, there just isn’t that much here. 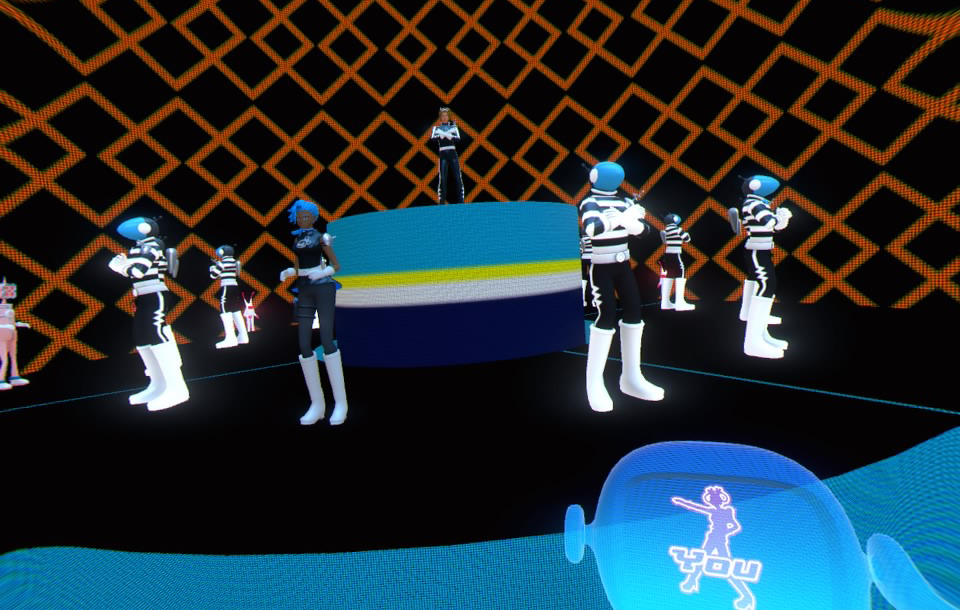 Trials expands upon the dance moves from the campaign.

Space Channel 5 in VR is a brief amount of fun that won’t kill more then an hour for most of us.  Fans of the franchise might pull more from this thanks to the return of a few characters from previous Space Channel titles but for those who don’t have a connection to the original games, you’ll be wondering what all the fuss is about.  With the promise of more content to come to the game, we’ll see where this game is heading but as it stands now, it’s a quick little jaunt in VR and little else.

What would I pay? This is a whopping $40 US and that’s just plain nuts.   Given the content available at launch, I would be hard pressed to pay more then $15 if you were a fan of the franchise.  As a non-fan, there isn’t more then $10 worth of content though hopefully some incoming DLC will add some content value to this as it’s fun but over way too fast.

Grounding Inc. provided The VR Grid with a press code for this title and, regardless of this review, we thank them for that!