End Space has been available on the Gear VR for some time and was actually one of my very 1st reviews and I recently revisited the game on that headset just to what has changed.  Well now that version gets a PSVR port and I’m happy to say that the game has remained largely intact, with a few improvements, and while some may feel like the content is a little light, the freedom of propelling through space while dispatching baddies never gets old. 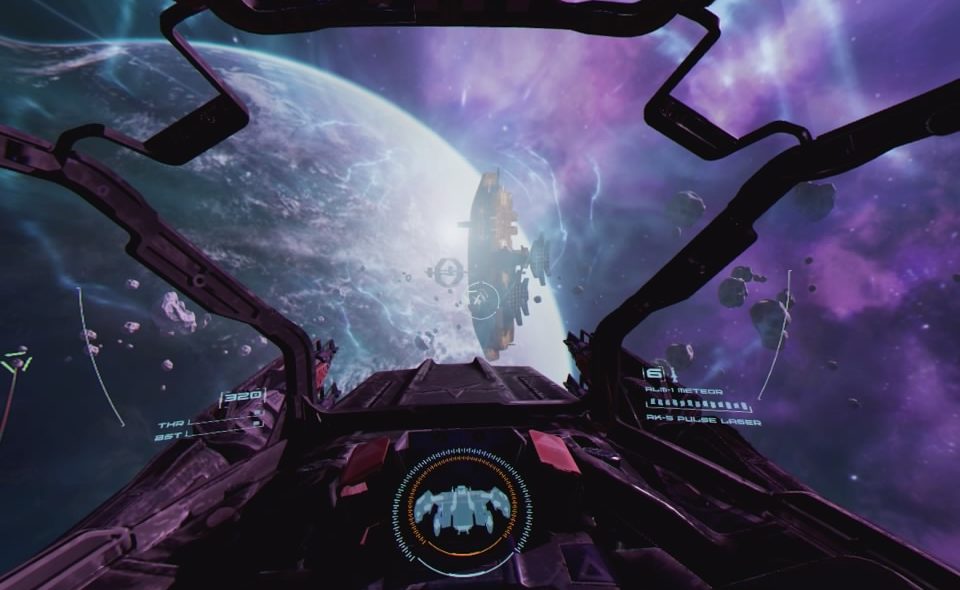 Your view of the action and the backgrounds, though immobile, still look good!

As it is DS4 controls, you are in complete control of your ship and on the off chance you own a HOTAS rig, this supports that as well.  Aiming your weapons is used by the in-game neural interface, which lets you look where you want to shoot.  Locking on to enemies can be a tricky given the speeds at which they fly about you, but that just increases the challenge in the battles you’ll be facing. Your stock weapon is a machine gun of sorts with missiles as your more powerful second option.  Both have infinite ammo, but have cool down periods so firing with reckless abandon is not recommended.  Otherwise, you have the option to boost, slow down, and barrel role to your hearts content offering full freedom of motion in the cold depths of space.

It’s worth noting that End Space is one of the best-looking games available on the Gear VR and has seen much improvements from its initial launch.  This port carries almost the exact same look and feel though the framerate seems to have a noticeable bump, making for some seamless space battles. The texture resolution on ships and other objects seems to have also received a noticeable boost and it all makes for a much-improved experience over its mobile counterpart.  With that said, considering the more powerful platform, I was disappointed that the game didn’t improve the visuals further with more detailed and animated objects.  Enemy ships all look identical for their respective class, asteroids almost never move, and other space debris just feels like it could have used a little more detail, not just an increased polygon count.  Even the backgrounds, which look great at 1st glance, are just still images, which hamper immersion in stages rife with debris that should be moving.  Don’t get me wrong, it doesn’t look bad by any stretch but, for a console release, it seems a little lacking. 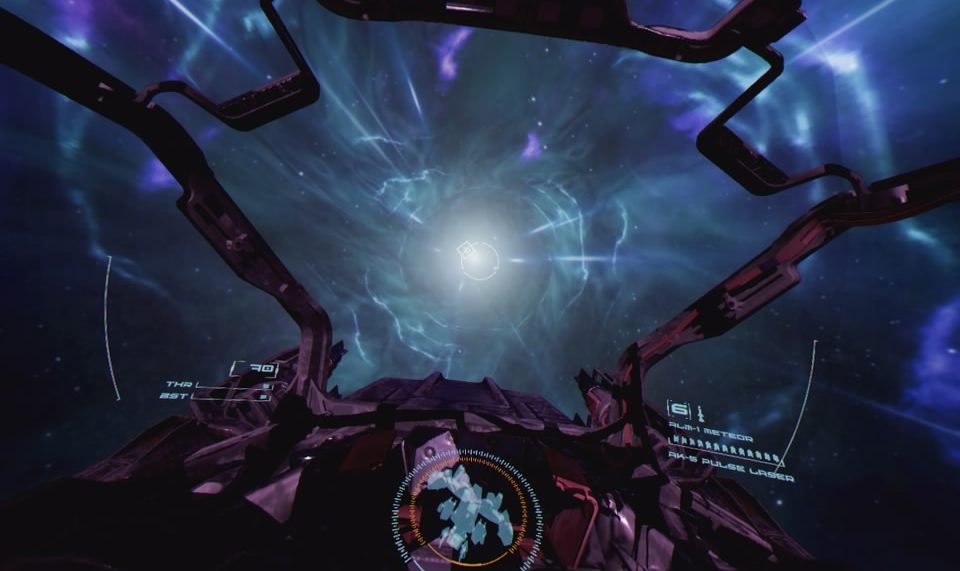 Every mission ends with the travel back to base.

The audio does pop with your ship, a Minos Starfighter, sounding as it should with weapons, boosts and impacts all carrying with them some significant punch!  Throughout each mission you are in contact with your commanding officer who explains the current situation, objectives and story.  The voice actor does an excellent job and sells the universe and story you are playing through with dramatic and stoic flare.  The one major issue with the audio is the newly added collision alarm which annoyed me the first time I heard it and EVERY SINGLE TIME AFTER.  As soon as you get “close” to anything an annoying beep sounds signalling you to them impending impact.  Fly to close to a ship…’bee, bew, bee’ near any object…’bee, bew, bee’; this sound plagues the entire game and needs to be removed as most close-calls you can see coming anyways and may even be unavoidable due to the mission presented (ie. flying through asteroids). 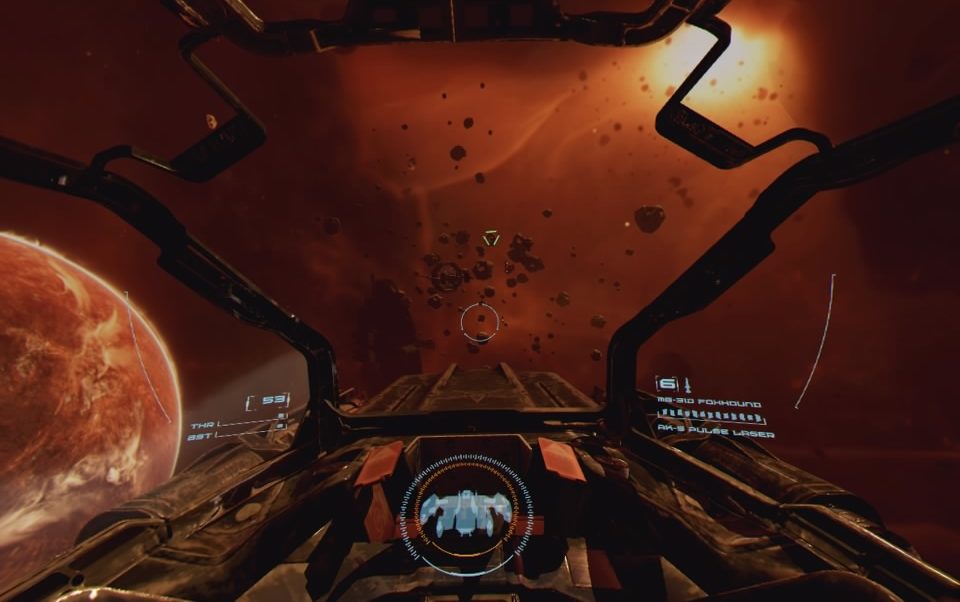 The tutorial level teaches you the basics of flight and combat as you would expect and once you hit the missions the game picks up.  The story has you playing through a few varying missions whilst under attack from the TFL, a group of “rebel scum” whose agenda is in direct conflict with your governments.  Throughout the 12 stages available (4 more than the Gear version), you’ll see a variety of ships and space environments that make each mission/level feel unique.  While the 1st mission has you navigating an asteroid field, a latter one has you maneuvering around crystalline formations that look damn near beautiful thanks to the top-notch lighting effects.  Though each mission effectively plays the same with TFL ships showing up and you having to fend them in a dog fight, some involve investigation, stealth or defending a target giving each stage their own unique feel and spice up the gameplay nicely.

In its current state, I still have a few issues, the first being that the AI just doesn’t seem to be very competent missing many shots directed my way, while not even trying to avoid my attacks.  This is remedied by the shear number of enemies that could be present in a mission, but in a 1 on 1 dog fight, you will always be the victor.  I would have preferred more of a visual upgrade, but what’s here doesn’t look awful by any stretch, and still has a few ‘oooo, aaahhh’ moments.  Lastly would be the upgrades available, there are only 3 in total and I’d advise upgrading you guns 1st. I made the mistake of choosing missiles and couldn’t beat a certain stage until I had replayed stages already beaten to save up enough cash for the upgrade I needed. Still, those were minor issues and overall the game still run very smoothly and is a joy to play through. 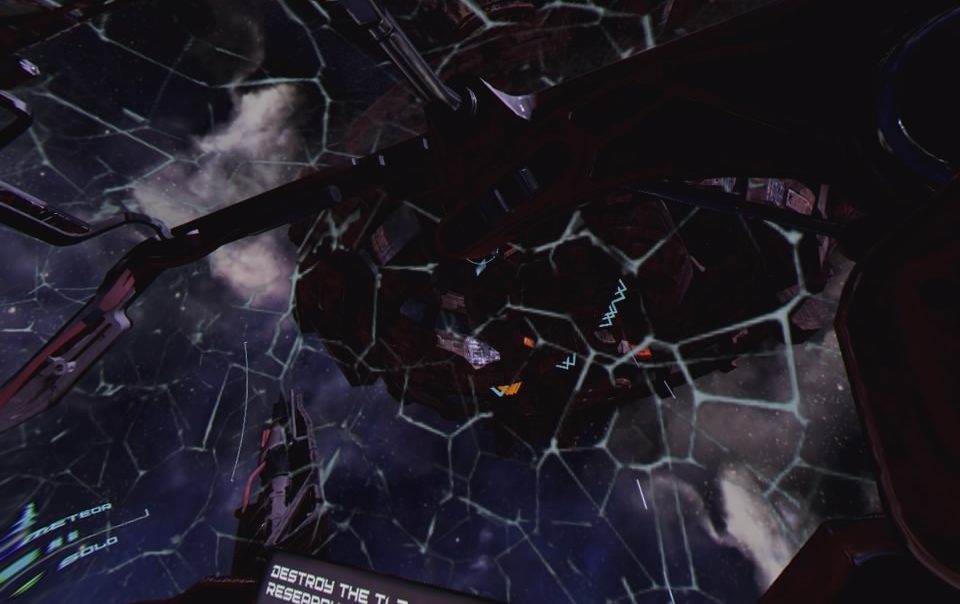 Take to many hits and your view may look like this…not good!

The amount of missions provided, along with the tight controls, make for a fun experience.  This is a solid game that serves the genre well and is easy to pick up and play for a mission or 2.  Even the shorter length of the missions makes replaying easy enough, just to see if you can do better.  If your looking for some retro, simple, space shooting fun, this should scratch that itch nicely.

What would I pay? At $19.99, this is a fair price.  The campaign can be beaten in around 2 hours and when combined with the tight gameplay and subtle change ups in the missions and stages, I was never bored.

Orange Bridge Studios provided theVRgrid.com with a review code for this game and, regardless of this review, we thank them for that!