There is nothing better then some good old-fashioned fan service, provided of course that you are a fan of whatever it is being thrown your way.  ONE PIECE Grand Cruise aims to be a VR taste of the ONE PIECE universe that I am admittedly totally unfamiliar with. It’s an odd blend of anime, pirates, comedy and some of the most flamboyant characters I have seen and even after playing through this title, I still really have no idea what the heck is happening in this world. 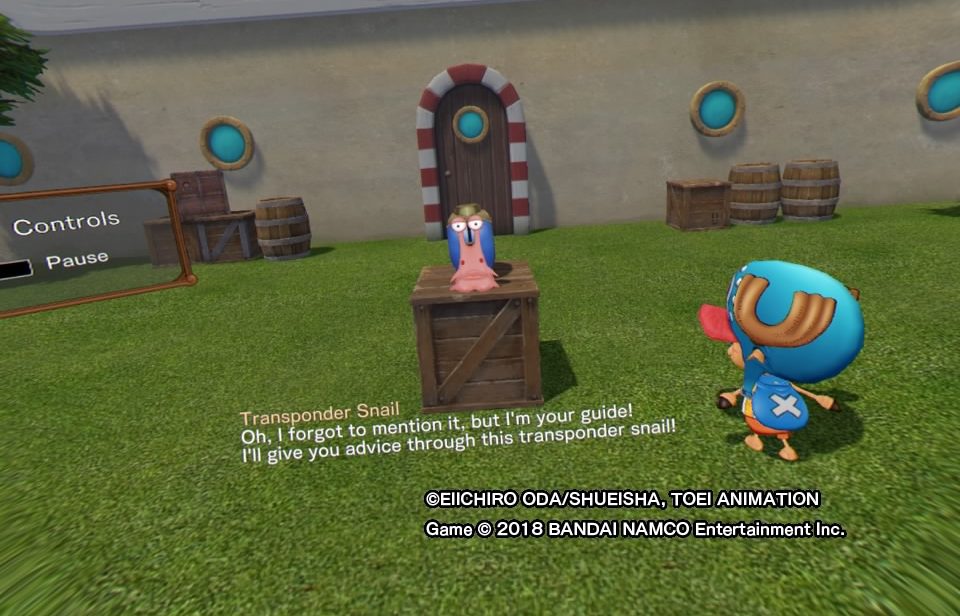 Armed with a DS4 or lone Move controller, which is really only needed for the combat section of the game, you just choose which area of the ship you wish to visit and watch a scene unfold.  The scenes are minimally interactive and mostly require you to stare at a reticle that pops up on an object or person to trigger a tiny event.  Once those scenes are done you are brought to the Ship deck fight where you control a canon…it’s not as exciting as it sounds.  Aiming is handled by tracking the controller so you tilt and steer the DS4 to line up a targeting reticle on the incoming objects or just point with the Move.  Once you hit X the game takes over and auto aims and shoots the target and you just keep doing this until the game decides to move on to another cut scene. 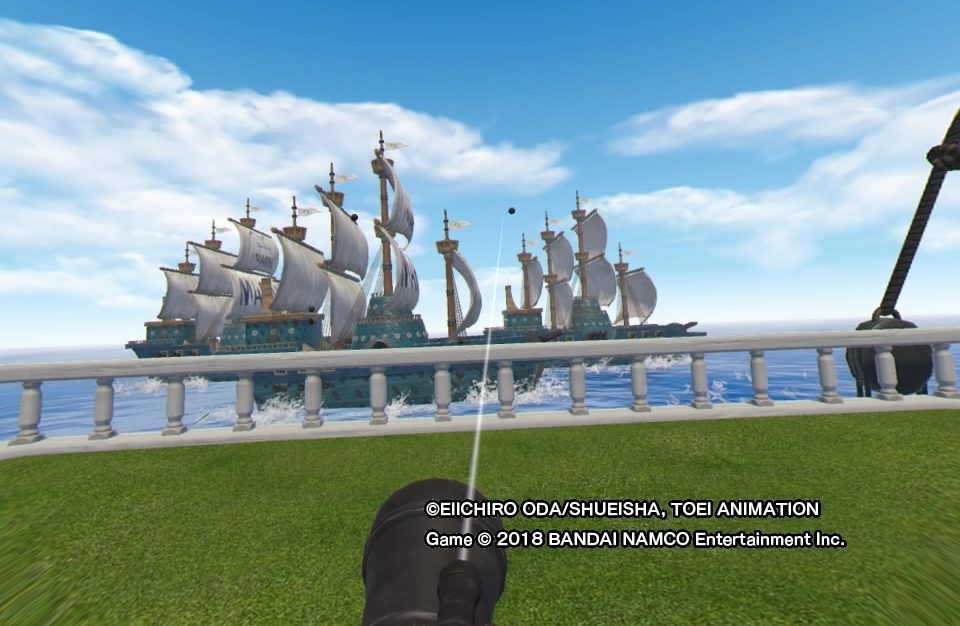 Line it up and take it down.

Grand Cruise looks great and captures the look of the anime nicely.  All the models carry a lot detail and are fully realized in 3D.  Specific areas of the ship are available to visit, each populated with 1 or 2 characters from the show who mostly monologue about the other crew members.  Whether it be a crew members quarters or the galley, each of these stations offers some light comedy clearly aimed at fans of the series.  Some more dramatic explosion effects pop up during the 2 canon firing scenes and do look and feel like they were ripped right of an anime series and do a great job of making you feel like you are in this strange universe.

Audio is a lot more of an issue.  First off, all the voices are in Japanese with English titles floating at the bottom of your vision.  This alone is not an issue as I assume it keeps the characters and their eccentricities intact.  The problem lies with the way the subtitles are displayed.  Whenever you move your head the subtitles take a second or two to float back into position so while you may want to look around in the game, doing so will more than likely sacrifice the conversation.  This is especially true in the canon firing sections when you will be too focused on targeting incoming projectiles to even notice the words popping up below you.  If you are interested in what the characters are saying, you need to pay attention to the sub titles and ignore everything else. 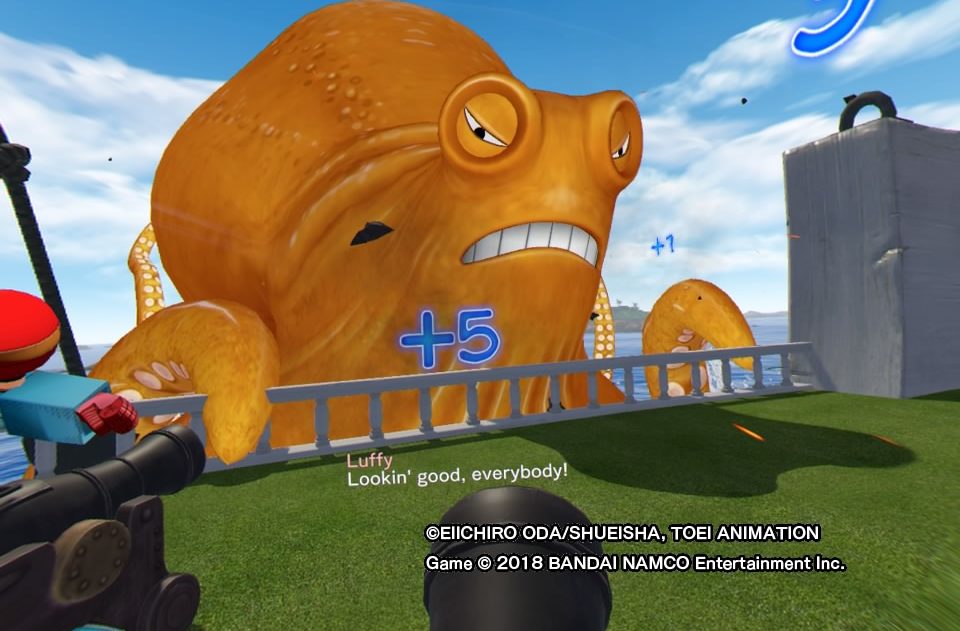 The game is broken up into 2 sections, but both offers similar scenes and action.  The 1st takes you through 1 of 2 cut scenes before battling pirates that hurl not just canon balls your way, but weights and meat and I think I even saw a kitchen sink.  The second section gives you 4 more cut scenes, and has you battle a giant Kraken, which really just involves spamming the fire button until you win.  After that battle you a greeted with longer cut scene where the main hero faces off against I’m guessing the main villain from the series.  The scenes have to be unlocked through menu selection, but once you have viewed them all, you can revisit them any time you want.

That’s it really.  Shallow combat, short cut scenes and an emphasis on repetition is the name of the game (or experience) here.    Besides the subtitle issue, my other contention would be the over sexualized female characters.  I get that this is just how things are done on the other side of the world, but for me it was laughably ridiculous and unnecessary. It just comes off as a cheap way to gather a younger male audience so if way over sexualized women are an issue for you, they are here. 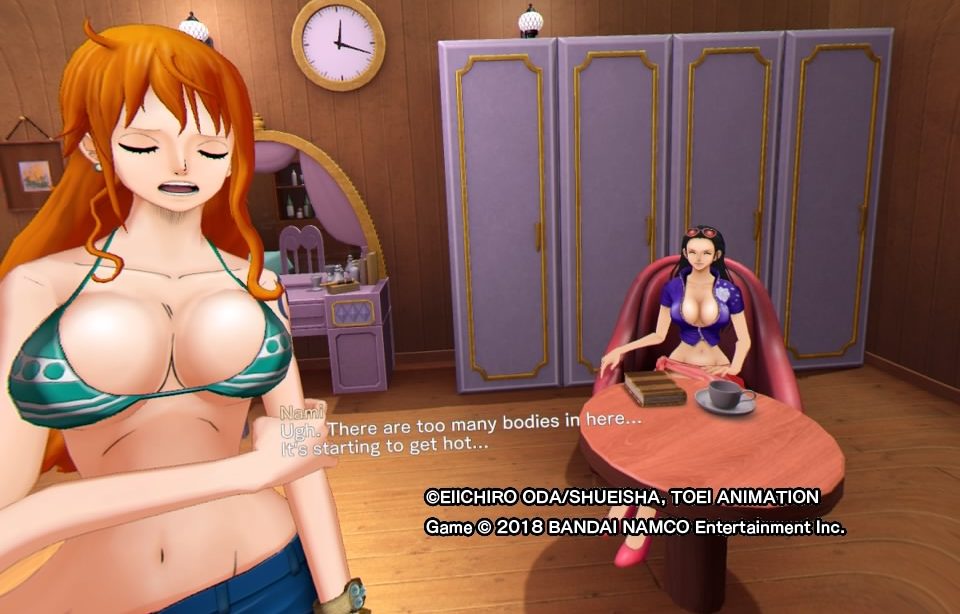 I honestly don’t know what to say……..

Not much more to say really.  Grand Cruise offers a small glimpse into the ONE PIECE universe and while I was left kind of dumbfounded by it all, I think fans of the series will dig this and in truth, I’m kind of curious to see what the show is about as it just seems to be a tad insane and over the top…which I kinda dig.  This is way more experience then game but if you are into One Piece, you’ll probably appreciate what is offered up here.

What would I pay? For me, $5 seems more appropriate.  The content presented is all fan service and I’m just not a fan of One Piece…at least not yet.  That said, I think there is just enough content here to warrant a full priced purchase if you are fan of this seemingly insane series, just keep in mind it’s more experience then game.