If you love point and click adventures than man oh man you should probably look somewhere else for your gaming.  Alright, maybe it’s not that bad, but it’s not that good either.  You play as co-pilot(or so you are referred to) on a mission to Mars to see what secrets lie beneath its surface.  Naturally not everything is as it seems and it’s up to you to navigate the terrain to unearth Mars’ deep secrets. 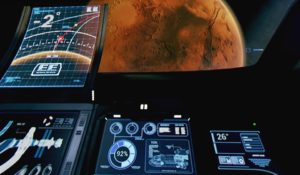 Utilizing 2 move controllers this game uses context sensitive scenes to let you interact with the environment in a few different ways.  Naturally the controllers are mapped to your hands, like you have seen in many VR titles, though little touches like bringing your hand to your head to turn your headlamp on or off do give you a light sense of immersion.  In a shuttle you can grab and fiddle with dials with no consequences until the games story asks you to specifically fiddle with a specific instrument.  On mars you can pick up a few random objects that serve no real purpose, unless they are directly related to advancing the story.  Movement in these sections is handled by holding onto “square” and pointing at your next way point (or teleporting).  I did have some issues with hand tracking, making the few puzzles here that required precise motions a little difficult and thus annoyed me.

The other major control scheme here is driving your rover across Mars’ surface with a 3rd person view in these sections, a missed opportunity,imo, for some 1st person driving .  It works alright but the way the controls are mapped to the Move buttons makes thee missions a little awkward.  Tilting your right hand and holding the trigger will turn your vehicle in the direction you want to go (like a joystick).  A few other buttons available in this mode adjust viewing angles.  My biggest issue here is once you drive far enough from the stationary camera(you), you press ‘X’ to reset the position behind the rover.  Resetting the camera also resets the move controller position.  So lets say you were in the middle of a hard turn when you reset the camera, well now your twisted right hand is in the default position, forcing you to twist in awkward positions to get back on track.  This is remedied only by resetting the camera while the move controller is straight up and down in your hand.  It will annoy you, but some mental adjustments will bypass this problem.

The visuals on the other hand are kind of all over the map.  In some cases, given the price point, this game looks better than it should.  However, these high points only emphasize the lower points as well.   Shadow effects are great, but only go from black to viewable so certain section have your hands disappearing in the black until you move back into the light.  While some scenery looks good, flat details and textures ruin any sense of “being there”.  Character models contain a fair bit of detail, but limited animations make them feel unnatural.  It’s a mixed bag here for sure, but overall I’d have to say this game looks better than it should, but considering the story involved, it would have been nice if the visuals kept pace with the (epic?) story here.

Audio as well is a mixed bag.  Every character, including yourself is fully voiced which lends itself well to the narrative, but the voice acting leaves something to be desired.  It’s not awful, but does sound a little deadpan and emotionless at many points.  Your robot companion’s voice is something ripped right out of 70’s era sci-fi shows, which I found amusing.  The script, though not terrible, probably could have handled another rewrite just hammer out some of the awkward kinks.  Sound effects are also subdued and sparse.  They serve their purpose, but I was never wow’d by anything. 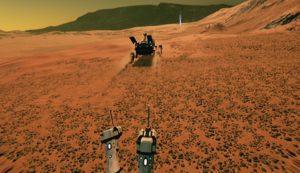 Driving your vehicle is fun enough, though I wish it was in 1st instead of 3rd person.

I’d have to describe this as an interactive science fiction ‘B’ movie.  The story here is interesting, though it treads almost 0 new ground as far as the unknown mysteries of mars go.  The voice acting is comedic at times, especially when coupled with an occasionally awkward script, but unfortunately the game takes itself a little to seriously to embrace these qualities, instead coming off as a game that tried to be bigger than it is.  At roughly 2 hours or less to complete, and the way stages are broken up, it feels more like playing through a not so great film.

If you played “The Martian Experience” than you’ll be familiar with the way this plays out, it’s just way more fleshed out.  Small interactive bits combined with a teeny bit of on foot exploration (teleportation, not walking) and some driving missions in between those sections, which offer some of the best views in this game but not much else, are what this title comprises of.  The saving grace here is the complete story, which entertained me enough with a few highlight moments that had me wanting to see it through to the(somewhat drawn out) conclusion.

What would I pay? $10 seems more appropriate, nothing here amazes and while that’s not a bad thing, it’s not good either.  The lack of any real game elements, besides the driving missions and the very limited interactivity in stages, has this playing out more like a movie than a game.