We just don’t have enough fantasy VR RPG’s and that statement is doubly true for Quest owners with their being almost none worth note that offer a fleshed-out campaign along with some clever and in-depth VR interactions.  Stones of Harlath looks to fill that void as you play a battle mage who is shipwrecked on a mysterious island and gets caught up in a plot that could spell doom for the islands inhabitants if you don’t intervene. 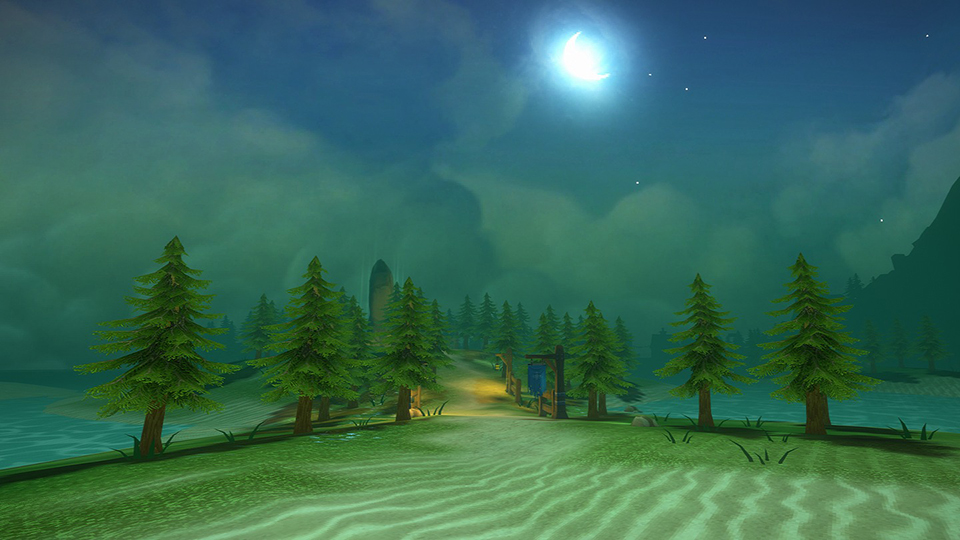 Playing in traditional 1st person fashion, you have 2 hands and can switch between 2 different modes, melee combat or magic wielding. At the time of this review, click turning is your only option so you may want to play standing or in a swivel chair as enemies can come from all sides.   With sword and shield in hand you can block any attack that comes your way and can flail madly at whatever is attacking you, typically knocking the enemy back a little bit adding a little impact to your blows.  With magic, things get much more interesting as you need to draw symbols in the air with your right hand to load up a magical attack be it fireballs, lightning, life drain and a few others.  Each magical ability, there are 6 in total, also has a power move so instead of summoning 5 smaller fireballs, you can instead launch 1 mighty blast that can take out multiple enemies in one shot or set down a healing ward that could save you from dying.  When casting spells, your left hand holds your spell book, which reminds you how each spell is drawn, includes a world map, your next objective & enemy codex.  In many ways this plays like a 90’s era action RPG with a traditional ‘kill the rats’ quest to introduce you to the base mechanics before sending you off into the world.  On that journey you’ll be given some basic quests from the local townsfolk, all surrounding some weird happenings nearby.  Treasure chests are scattered throughout the land which contain health and magic potions and can only be consumed where they are as there is no inventory system.  Enemies will also drop health and mana balls which will refill a little of each with your foes coming in many forms from rats, bats, wolves, skeletons, kobolds & a few more that use either close quarters combat or try and pick you off from a distance with a variety of projectile attacks.   Their are additional weapons besides your starting sword which can be found in your travels as well magical buffs for said weapons so while it may lack the depth of large RPG’s, there’s still a fair bit to contend with. 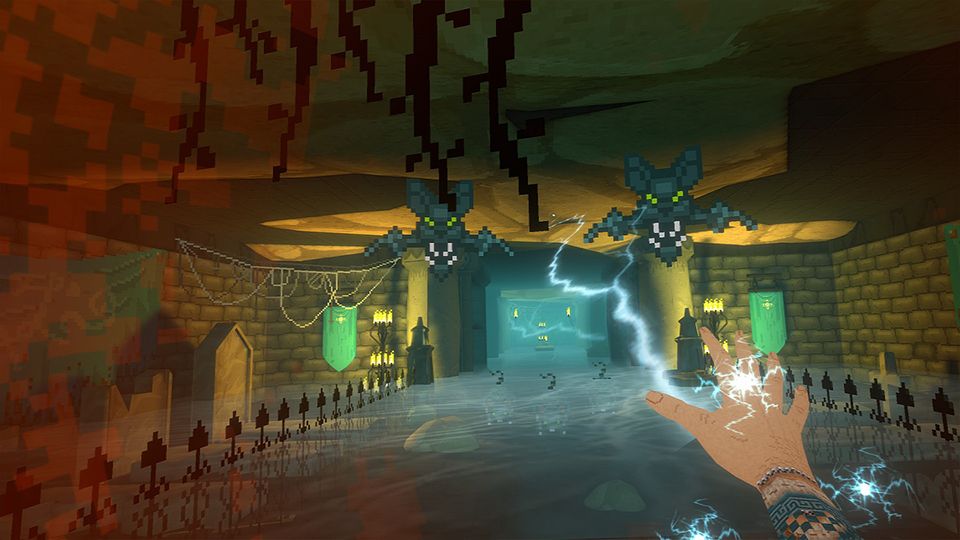 Enemies come in many shapes and sizes

In line with that 90’s era vibe are some 90’s era visuals which are fun to look at in VR.  The environments are still 3D with a pixel-art design that hearkens back to the early days of 3D gaming and works in VR.  Populating that landscape and depending on where you are on the island are additional finer 2D details like vines, chains, banners and so that add a little bit of realistic depth to the world.  All the NPC’s and enemies you face are 2 dimensional and in true old school presentation, always face you and that may sound a bit minimalist but comes off as charming and retro.  Not so retro is the magic which is rendered in a much more modern form with all of the magic in the game looking like something out of ‘The Wizards’ franchise, creating a nice juxtaposition between the retro and the new.   For those that have played the Pixel Ripped series, this is very much akin to that game but on a much larger scale and in a fantasy setting.  Drawing those magical runes successfully will have little orbs circling your hand indicating how many shots of that particular spell you have loaded up.  Those looking for something akin to Skyrim or The Wizards may be disappointed by the old school presentation but stick with it and I bet you’ll be smitten by the charm of it all. 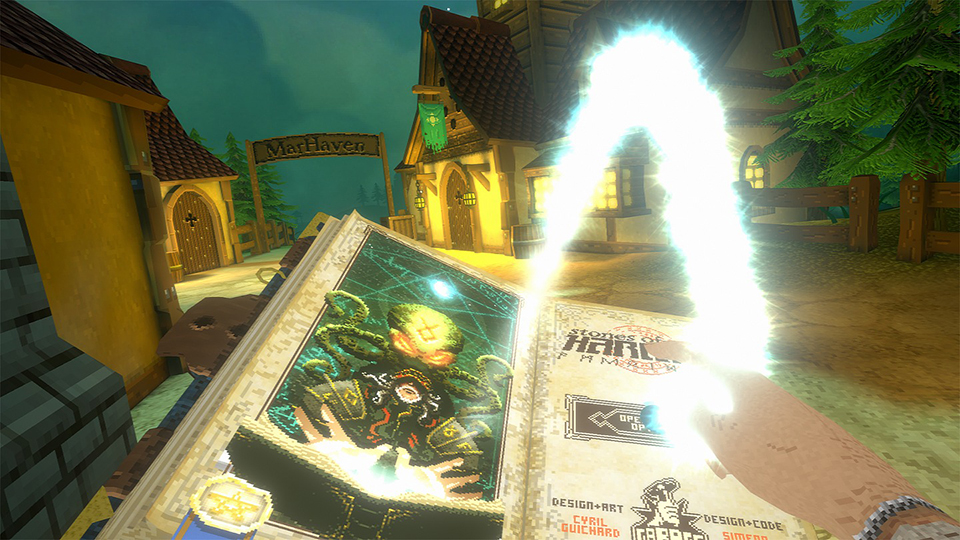 Drawing spells is intuitive and easy.

Audio is much more a mixed bag with a fairly epic soundtrack that follows you on your journey but accompanied by that are sound bytes that don’t always work.  When inside the few abodes with people, they’ll be some ambient sounds of a crowd that’s not there and when some of the NPC’s speak, you can hear the echo of a room not quite sound proofed or the hum from mic that’s a little hot though the latter seemed to occur largely at the game’s onset and didn’t wreck anything but was a reminder that this is a budget Indy VR title.  When you leave the town of Marhaven you’ll hear the incessant sound of what sounds like a very old wolf howling in the distance and getting close to certain areas will double up some creepy sounds which includes some moaning and other freaky noises that are initially unnerving but pop up so often and don’t ever involve any encounters that they ended up being more ancillary than effective.  When in combat, everything sounds as it should and the impact of your weapons is satisfying despite the unrealistic presentation and seeing as how most of the game will see you in action, the other shortcomings are infrequent and somewhat forgivable.

I had a fair bit of fun with Stones of Harlath and it honestly reminded me of a stripped down & simplified version of Skyrim VR.  It lacks the role-playing elements typical of the genre as the only real progression is in the new spells that you unlock and the few weapons you find.  The quests and objectives are little more than ‘go here, kill things, find a rune’ and repeat but it works…mostly.  I had some issues summoning spells as each rune is unique but when I drew the symbol for a fireball, it often summoned the shield spell, and those runes don’t look much alike.  Up until the last 2 dungeons, 6 in total, I also found the game to be quite easy and I breezed through those catacombs with relative ease save for the mini boss encounters which weren’t that much more difficult as the AI isn’t overly smart, though some enemies do have some surprising attacks and if you aren’t careful, getting overwhelmed could still happen.  You can actually practice these overwhelming scenarios in the coliseum which places you in wave-based combat until you die, adding some replay factor for those who want to test their skills beyond the 4-hour(ish) campaign.  Other minor jank issues like some stuttering when walking, enemies getting caught on geometry and the height of my character being a bit off whether seated or standing hampered the experience but none of these issues held me back for more than a few seconds before I was back on to the next monster filled lair. 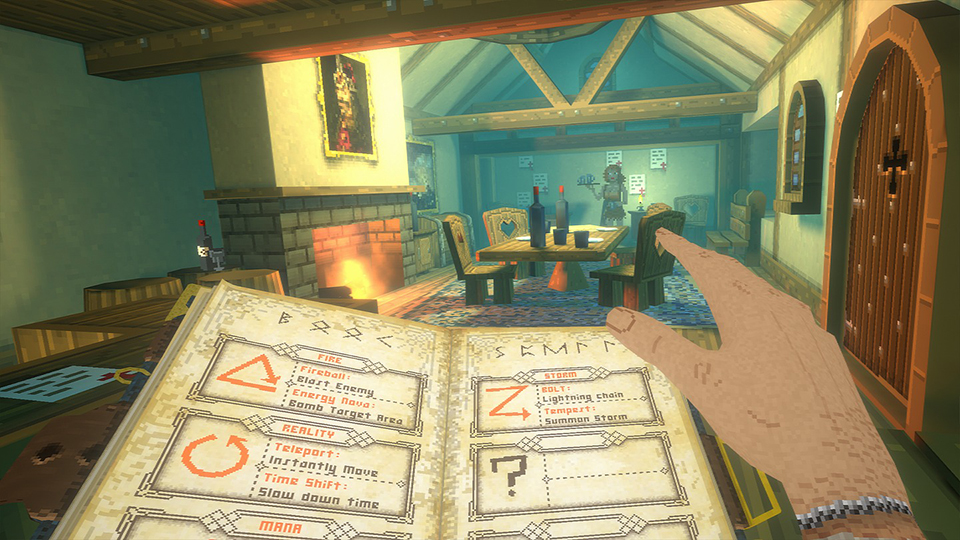 Stones of Harlath is a solid, albeit simple action RPG akin to the entries in the genre from 30 years ago, but with a modern VR spin that works.  I honestly enjoyed the presentation more than I expected to as that art style lends itself well to VR.  Longer play sessions may get a little redundant but stick to conquering one dungeon at a time and taking a break after that and I think anyone looking for a fantasy brawler will be pleasantly surprised by this one.

What would I pay? It’s not amazing and comes up short in a few departments but the $10 price tag on this is still a bargain and hopefully the developer will address some of the issues I mentioned and clean things up a bit.  For those looking to get their fantasy on, I bet this will surprise you!

Garage Collective provided The VR Grid with a press code for this title and, regardless of this review, we thank them for that!