Sairento is a VR title that has been a staple of the PC headsets since it launched in early access all the way back in 2016.  Since that time is has seen countless improvements, tweaks, add-ons and so much more making it a must own game for any VR player.  Well now we PSVR users get to experience what it’s like to be a cyber-ninja out to defend  the populace from a terrorist attack from some other crazy cyber-ninjas who come at you with a wide array of weapons and powers though thankfully, you’re no slouch in that department either. 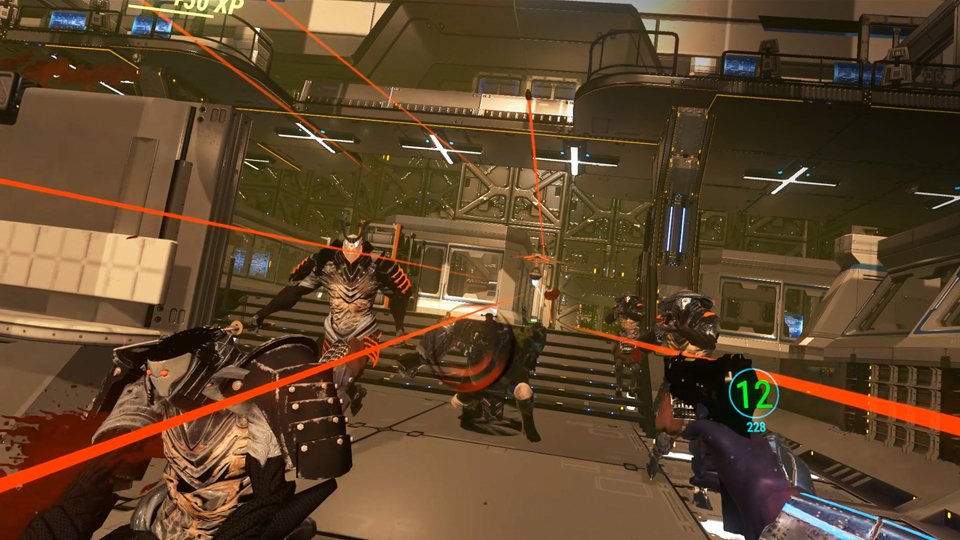 These ninjas don’t mess around!

You need 2 Move controllers for this dual-wielding adventure as you can fire a plethora of single and 2-handed weapons ranging from pistols, a bow, machine guns and a variety of swords and other ninja weapons as well.  You can teleport around the map or use smooth locomotion thanks to what I think is the most extensive list of comfort and game options I have ever seen in a game.  I will never complain about having more options, especially when it comes to comfort, but some of the wording in the multiple options menus may force you to experiment around with a few of the settings as the wording makes it a little unclear as to what they actually do.   Besides just walking or teleporting around you can jump, perform double jumps along with wall walks, power slides and back and side flips all of which are aided by a slow-motion mechanic that allows you to deliver maximum damage with maximum style.  The 3dRudder allows you to free roam a lot easier than the 1 button move option on the motion controls, though either control method works surprisingly well.  You can pick up a variety of buffs for your weapons and armor that allow for just about every kind of option from increasing damage or defense to leeching health off of your victims with melee attacks, faster reloads and a ton more.  You can also unlock and increase your own abilities with points earned through single or online play letting you customize your ninja to your liking and making her more and more bad ass.

Sairento offers a single player campaign which won’t take more then 3-hours on the easier difficulties though you can ramp up the challenge if you find you seem to be breezing through the stages in minutes.   Besides the campaign is some random missions taking place in stages from campaign only with singular objectives like killing every bad guy in the area or a specific target or just surviving.  Endless mode is also an option ensuring you have plenty of reason to come back to the game even after you conquer the game.  Those looking to play with a friend online are in luck though the full multiplayer experience from the PC side of things has been stripped back a 2-player P v E only game type through you can pick from a few different game modes and tack on a whole bunch of modifiers so it’s still a challenge and a lot of fun, and if you really want to kill you friend, you can turn friendly fire on…you sicko. 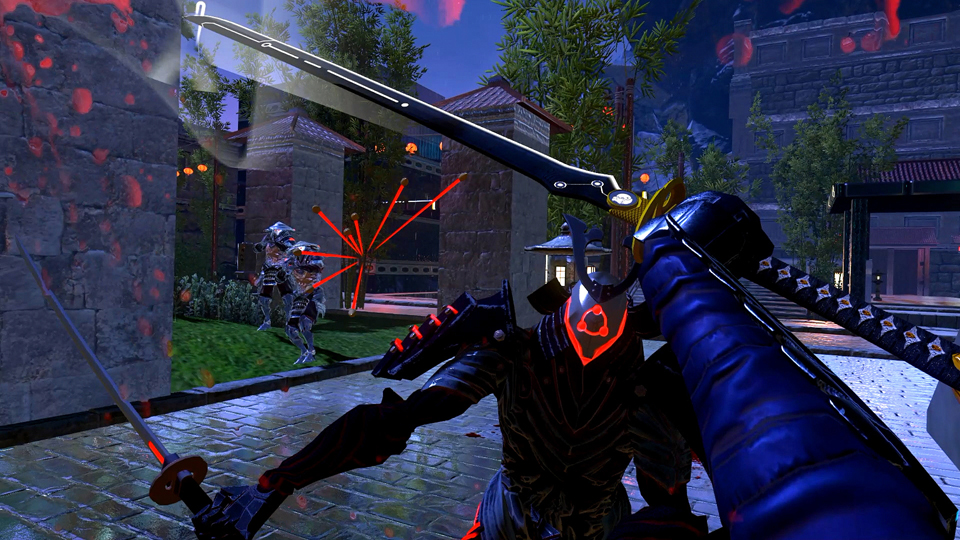 The melee is fun, but I prefer a little more distance.

Sairento is a very clean looking game but don’t expect to be blown away by the visuals here as this looks like well polished PS2 game, lacking a lot of detail of more modern efforts.  That’s not to say it looks awful as the assortment of characters you face look very decent and some of the actions you perform are astounding at times, it just looks a little dull.  Textures are flat, lighting effects are non-existent giving the world a very flat and sterile look.  That simplicity does benefit the game though as some of the stages are very large and populated with a large number of foes and I never once experienced any kind of lag or frame drop in my play allowing for a very smooth experience.  There are still some visual wonders in here as you fly through a stage bouncing off walls and performing back-flips in slow-motion while you gun down your opponents before landing and power sliding toward them to slice them into pieces and thankfully, when you do slice up an enemy, they do fall to pieces.

Every character is fully voiced though there are only a handful of cut scenes in the game.  During the missions and in between them you talk to your partner who breaks down the plot and keeps you up to speed on the current events.  The voice acting is solid and carries the story along nicely, but the star of the show is the effects and music which go along ways to help making you feel like the ninja you are.  The variety of weapons in here is awesome and each one has its own corresponding effects and when the action gets intense, a high-octane soundtrack is there to ensure you don’t stop moving until everything is dead. 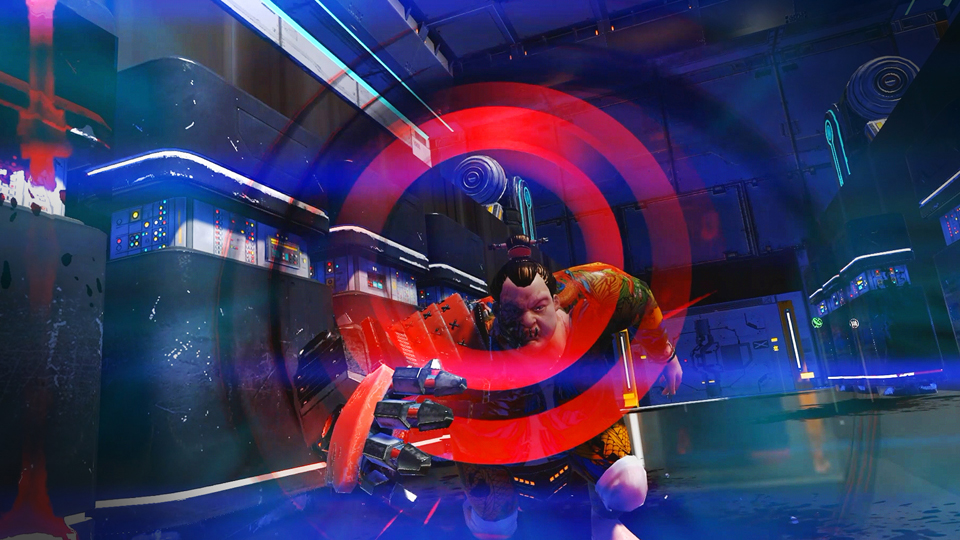 Don’t let these dudes get to close.

As awesome as the action can be at times the controls can be a little too much causing some hectic moments where fleeing just to get your bearings is the best option.  Melee is visceral and fun, but there is no parry system in here, though you can deflect bullets, so close combat tends to devolve into a bit of a waggle fest, especially if you are being overwhelmed.  Because of this, I ended up not using swords a ton and opted for more gun play and other ranged weapons and still had a fun time leaping around the levels like Neo from The Matrix.  On that note the best way to play this is with every comfort setting set to off and I feel like those who play with blinders, teleport only and remove the flipping, which is freaking awesome, may be forced to miss out on some highlight VR moments in exchange for not getting sim-sick.  The campaign is on the shorter side but the shear amount of unlocks and level modifications ensure that those that want to spend more time in the world of Sairento have plenty of options to do so, on or offline. 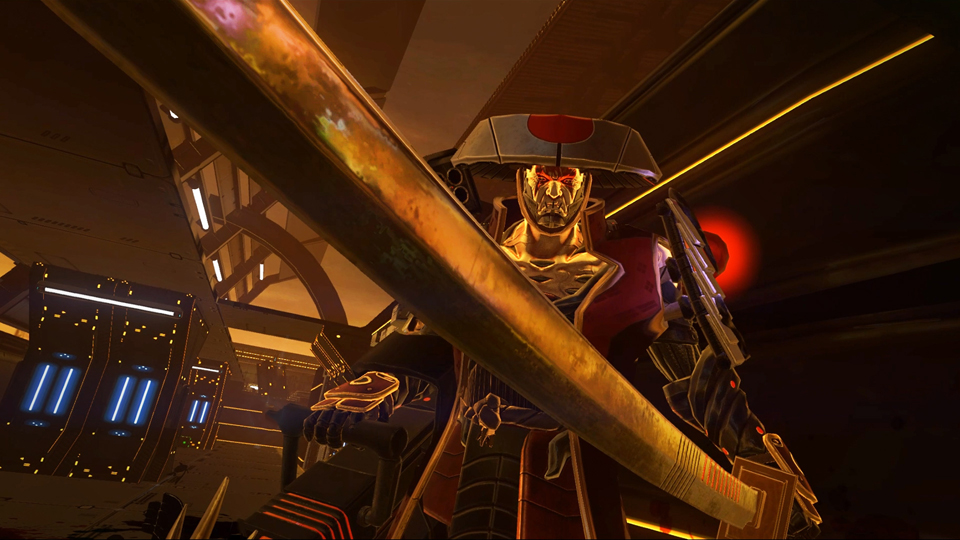 This dude take a lickin’ and keeps on tickin’

Sairento showcases just how fun VR can be when the reins are taken off and a developer lets you go nuts in VR.  I had more fun running along walls and performing ridiculous acrobatic moves then I did during the combat section and combining those 2 things makes for one heck of a VR ride.  If you like fast-paced action, have a stomach for the maximum locomotion in VR and a Diablo-esque level up system then Sairento needs to be the next game in your library.

What would I pay?  Despite the missing P v P mode, the rest of the original title has made it to the PSVR and offers an experience unlike any other.  Hack-and-slashing or run-and-gunning offer their unique flavor of gameplay and the replay factor is high thanks to randomized missions and daily challenges.  This is VR done right and I’m happy with the $30 asking price.

Perp Games provided The VR Grid with a press code for this title and, regardless of this review, we thank them for that.