The horror genre is surprisingly lacking on the PS4 titles with only a handful of titles available and most gearing more toward the action than suspense.  Weeping Doll would appear to be leaning toward the latter with a somber, Japanese horror inspired story.  The problem here is the devs forgot to put action, suspense or horror in the actual game. 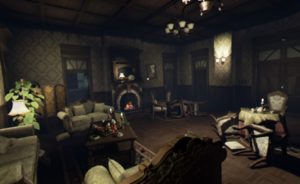 The art style reminded me of old school Resident Evil Games. Unfortunately, that’s about all they share in common

The story is a simple (and short) one with an Asian family living in a large, well-lit Victorian style house and you, as the maid, arriving home to some mysterious happenings.  Without spoiling any story, this is one game that doesn’t just want to hold your hand, it wants to hold both of them.  Your character constantly spells out what to do with statements like “I should go back downstairs” or “Maybe this is the key for the door upstairs.”  I get not wanting people moving aimlessly through the house, but excluding one moment, which required you to remember a previous puzzle combo, there is no sense of solving anything, just following the maid’s suggestions.

Navigating this house utilizes a control scheme you’ve seen in games like Sports Bar(review here) with you selecting where you want to move, within a certain range, and transporting there.  In this game, you actually see the shape of the maid showing where you’ll stand and what angle.  It works, but when you want to get somewhere fast, its jarring and feels very clumsy.  You have a decent inventory system, but is almost unnecessary.  Excluding keys, any items you can pick up really don’t need to be stored as they are only needed for a puzzle in the same room you are in.

Your left and right triggers hold items in each hand and anything you can interact with highlights itself, or looks obvious with a big “L2” logo beside it when you look at it.  Almost every item in this game is one time use, except for one puzzle, but all the pieces are in the same room so you can travel back and forth just as fast.  Triggered events that occur to advance the story hinder movement with invisible walls so you can’t beat the story to the next “mystery”.  It hinders immersion.  There was only one puzzle that had me thinking a tiny bit, and the hardest part of it really was remembering the solution for a later part of the game which presents you with the same exact same obstacle, without any way to view the solution from where you are.

The levels themselves look ok, though I suspect a port from a less powerful device might be backing these visuals. It looks like a house so I guess they did their job, but it’s not spooky, with every room being lit light a Christmas Tree.  There were 2 funny moments in the game where you peer through a peep hole of sorts to see events on the other side.  What makes them funny is to change your view to that scripted event, the devs just tracked the hole to your headset, so you can still look around with this giant chunk of wall blocking your view.  Its hilarious. Some brief flashback sequences as well are triggered by certain obstacles, which fill in a bit of the story, but it almost doesn’t matter.  What makes these annoying is they can be triggered over and over again which is irritating when they are attached to doors and you have a key waiting to be used.

The audio is the standout here, and not in a good way.  Tong is the name of your character (that could be wrong, Idc) and she must be a helluva maid because she is as dumb as a post.  There is a scene where she watches a body get dragged out of site and responds with “Oh my, she’s fainted”.  Its hilarious how simple your character sounds and her reactions to the happenings around her are ridiculous.  The other voiced characters are doing their best, but it mostly comes off as bad dubbing, with one particular scene at the end standing out above all others. 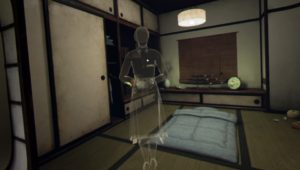 Nope, not a ghost. That’s how you navigate through this game

What that all leaves you with is a very shallow, linear experience devoid of suspense, thrill,s horror or even decent voice acting.  The puzzles are kindergarten simple and the story itself will take you less than an hour to crush.  The ending is also left “open” and I wasn’t actually aware I beat the game until I navigated the house and saw the credits, which were actually a highlight and a different way to show off the dev team.  I also encountered a glitch at the end of the game which reset the final “event” forcing me to endure it again and than presented me with an invisible wall I couldn’t pass and thus couldn’t trigger the event from continuing.  Luckily I had already beaten the game apparently, so it didn’t matter, but still.

This is weak entry in a genre that desperately needs to be exploited in VR.  It does almost everything wrong and even when you get to the final act, you just don’t care.  I don’t think there was one scare in this whole game. Oh, and did I mention this can be beaten in less than an hour…BLAH!

What would I pay? $1…and that’s only for the comedically bad acting from your character.  Otherwise, stay away.  It’s not good.