Disaster Report is a franchise introduced to the world back in 2002 for the PS2 that put you in the role of a survivor on a sinking island who must escape it while avoiding earthquakes, flooding and collapsing buildings.   Surviving was not just about avoiding obstacles but also tasked you with staving off hunger and thirst while aiding the few people that you come across.  3 sequels later and we get Summer Memories, a game originally developed for the PS3 but got stuck in development hell and pushed back to this generation that puts you once again in the role of a survivor in a city plagued by earthquakes and after shocks.  While I typically only address the VR content in any game, for this one I’ll be tackling both the VR and non-VR portions for reasons I’ll explain below. 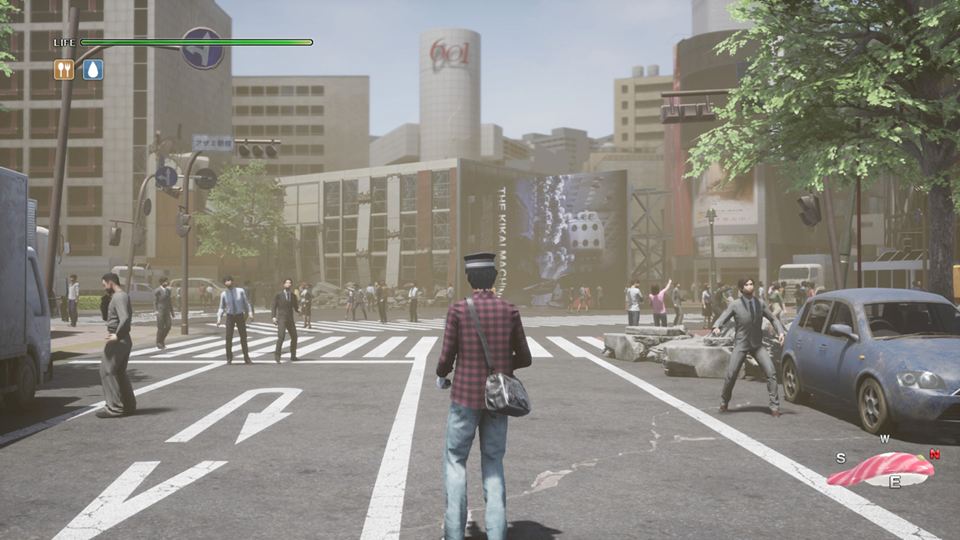 Lotta people to talk to…but who’s got your next fetch quest???

The main, non-VR, campaign opens with a rather shallow character creation screen where can choose the sex of your protagonist and make some minor adjustments to his or her appearance.  After that, you get put in the game and it plays like most 3rd or 1st person walking-sims with you walking or running around the environment in search of your next objective.  On the VR side, controls are much more restrictive with you visiting smaller sections of the main game in on-the-rails action.  To walk from point to point you simply look at the available options as indicated by icons and hit ‘x’ to go in that direction.  The game will then let you walk toward that spot allowing you too look around and stop walking but you can’t deviate from the designated path.   In the storied campaign, you can move anywhere and encounter a ton on NPC’s, many of whom you can interact with though most will only reply or respond with a few lines of text at the bottom of your screen.  Some offer quests which are tied your overall progression so as you perform required tasks, earthquakes and other disasters will trigger in kind.  In VR, there is almost nothing else to do except explore your travel options which will also activate additional disasters that allow you to eventually escape each scenario.  You are given path choices which makes these scenes repayable if you miss a choice as hidden in each scene are collectible icons that can be used to purchase cosmetic items in the main game.  Each of the 5 VR stages will only take you 10 or 15 minutes to get through with the campaign stages taking much longer with the total game time clocking somewhere in the 15-hour mark.  The caveat with this one, and why I’m talking about the flat game, is that the VR stages only become available after you beaten the corresponding flat stage so if you want to see everything Disaster Report offers in VR, you are going to have to play through the entire campaign. 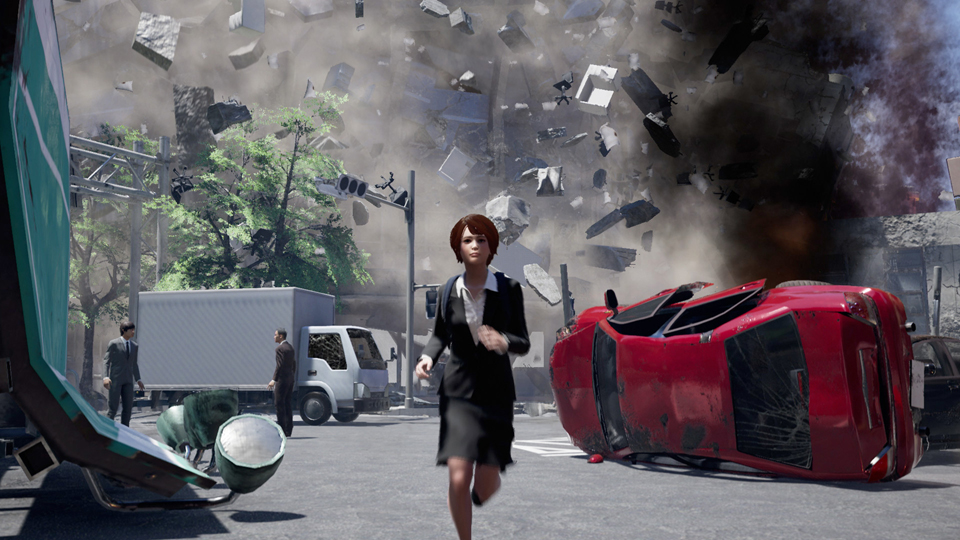 The destruction is the best part of this game, in or out of VR.

The look of the flat game is initially appealing though its cracks start to show fairly quickly and I can’t help but notice it looks much more like a game from last gen utilizing rather flat and simple textures and character models that look anywhere from alright to incredibly dated, though some of the reflections look impressive.  Each of the areas of the city you find yourself in are seemingly large at first glance but end up being rather confined and restricted as most of the area is blocked by the earthquakes destruction, ridiculous boundaries like a few crates or bikes, or just are just inaccessible thanks to locked doors.  The areas themselves are typically heavily populated with NPC’s and while you can interact with all of them, most just give you a line of text about what they are doing. You’ll see the same models over and over though most of the characters with any sort of depth typically look unique.  The star of the show is the disaster effects as the city crumbles around you.  Offset buildings and the rampant destruction of the streets you travel upon hammer home that anything could get worse at any second and more often then not, they do and you’ll watch entire buildings collapse, floors disappear beneath you or walkways fall into a river.   As far as the VR portion goes, you’ll visit these same settings from the main game, but in much smaller scale and having compared the flat visuals to a ps3 game, Id have to say the VR visuals are closer to a PS2 title.   Everything is blurry and much of the detail from the non-vr game has been replaced with low res and bland textures.  It’s still pretty slick when the earth shakes and a building topples in front of you though but these moments are definitely held back by the lackluster and barren environments.  However, because each stage is tied to one in the campaign, you will see a variety of environments from different city streets, flooded apartments, subways and other locales making each scenario feel unique. 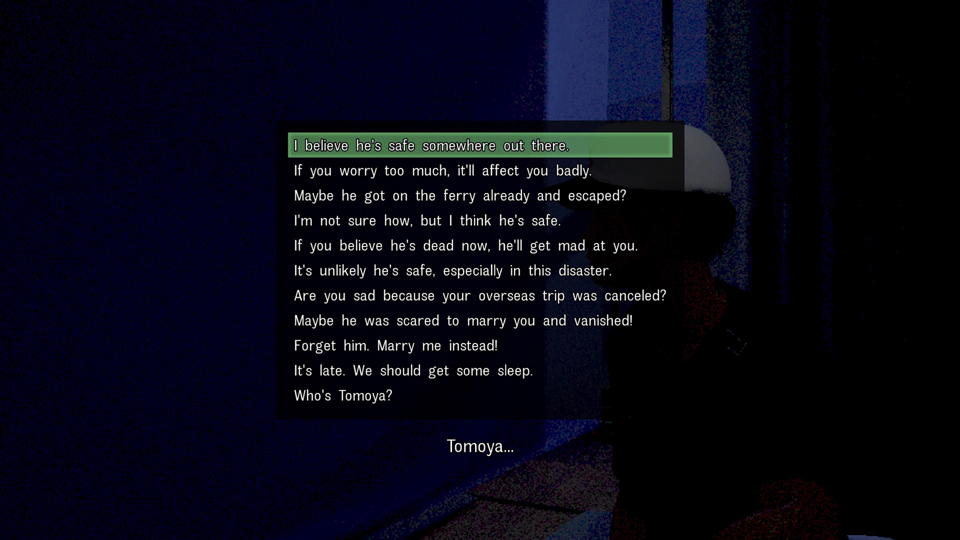 Sometimes the amount of conversation choices is ridiculous.

Audio design is also erratic with the 3D audio being on the poor side.  It’s there, but I couldn’t tell where audio queues were coming from so when I heard a person calling for ‘help’ it was hard to tell if they were in the next room or 5 rooms over.  This is much less of an issue in the VR portion as their really isn’t too much going on besides the insanely loud sound of your footsteps as you travel from point to point and the errant earthquake, which in either mode sounds like it’s happening all around you which just makes sense.  On the flat side though, whenever you are in a crowd of people, you can hear all of their chatter as you wade through them, creating an insane amount of conversational noise and with the entire game being in Japanese with subtitles, at times it can just come off as annoying and overwhelming when everyone is saying something at once.  Going for that cinematic feel, music comes and goes with whatever action is going on with the occasional sombre interlude rearing its head as the an in-game cut scene shows the scene you just left. 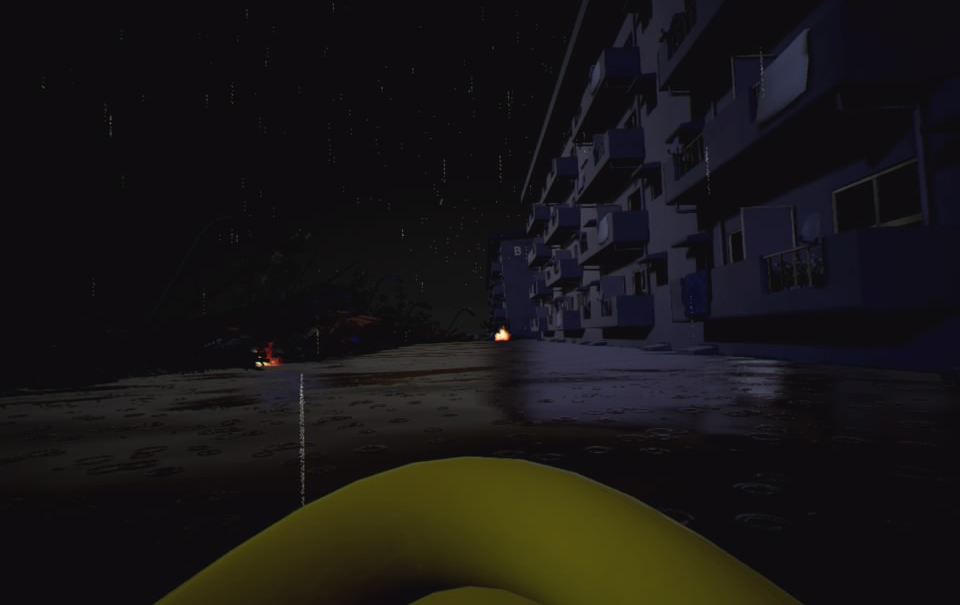 Summer Memories is rife with positive and negative moments beyond what I have mentioned so far.  The survival aspects of this game (food, water, bathroom…) are ever present but unless your character is extremely hungry or has to go #2, upon which they will hold their tummy, their is almost no indication of their need save for navigating to the status menu and seeing what’s up with him/her.  There are a few opportunities to get cash to buy needed supplies, but stores are rare as is how you acquire funds which really almost doesn’t matter given the lack of emphasis on keeping care of yourself.  Missions can be obtuse at times and I found myself on more then 1 occasion just wandering around looking for the next thing (person, item, exit) to progress the story as some paths aren’t open until you complete another task that you might not know about.  I found myself just running around looking for anything that responds to the press of the ‘x’ button or that triggers a cut scene because the game didn’t make it totally clear what to do.  You are  also gives you the illusion of choice with you being able to respond to conversations with a variety of statements ranging from saint to sinner with many responses have very “rapey” vibes and while I’m sure that could just be a result of mixed up translations, some of the responses are off-putting and don’t really seem to matter to much anyways as you still have to resolve these characters issues in almost the same manner.  That’s not to say they are all like that and some quests will change based upon how you respond but their really doesn’t seem to be any real benefit or punishment for any choice in the game as even the rewards when you get them aren’t really needed. Micro loading screens are rampant throughout the game and every time you trigger a cut-scene or conversation results in the game pausing while the game logo pops up before launching said scene and just feels like it’s been poorly optimised.  The camera is at best serviceable and at worst, a nightmare as it works in larger spaces but in buildings it has a hard time keeping you in view and should the camera get to close to your character, he or she will just disappear until you venture away from the camera which can be troublesome as the sometimes the camera is fixed but other times it’s floating making it hard to figure out your characters bearings from room to room.  Their a host of other issues surrounding just about every aspect of the game and while nothing was ever broken, issues constantly came up to hamper the fun.

On the VR side I found the levels to be somewhat enjoyable when quake effects kicked in, but they are actually rare leaving you with a VR experience that let’s you (sort of) explore these areas but the movement system is so restrictive that it definitely feels like an “additional VR-mode” and not something that feels fully fleshed out.  Exploration also doesn’t necessarily reveal anything of interest so when it says ‘travel to bus sign’ and you travel there all you get to do is stare at a bus sign so even what’s here feels bloated which is a shame as each individual VR stage shouldn’t take much more then 10 minutes to get through in the 1st place.  They have their moments and for those that care about buying extras outfits for their protagonist, it’s a motivating factor to revisit these stages but overall, they come off as rather shallow more anything else. 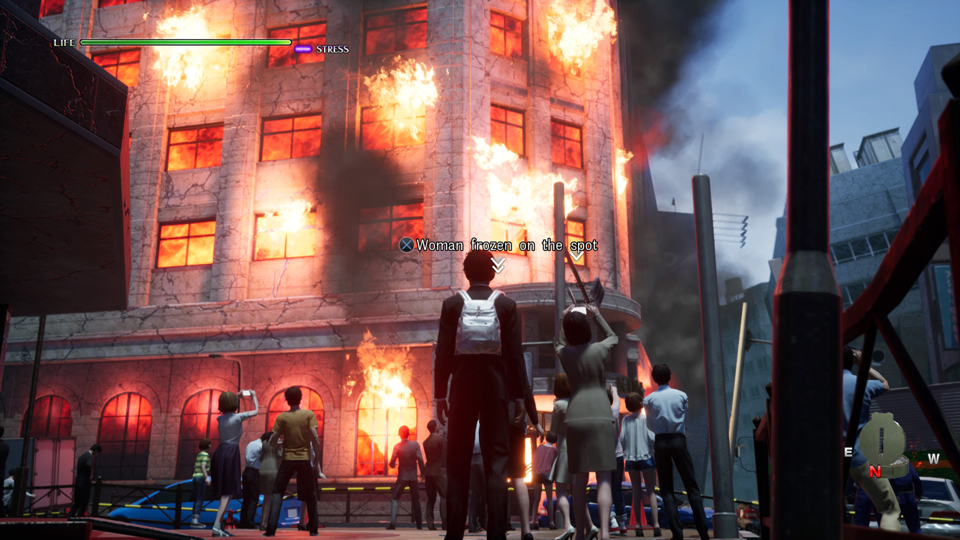 So where do I stand on Disaster Report 4?  Well, my initial impressions were riddled with constant annoyance at many of the games undercooked mechanics.  The more time I spent in here though the more it grew on me and while none of the flaws I mentioned go away, I was able to get around them and learned soon enough what to do and what not too.  Don’t get me wrong, from beginning to end it’s a mess but has enough depth to keep me invested in the world, despite the erratic narrative.  As far as the VR portion goes, it’s much more underwhelming but still has a few fun highlight moments that do make each stage worth playing through…once you’ve unlocked them.  As a total package I think it works, but temper expectations and know that it’s going to frustrate and annoy you as many times as it pulls you in.

What would I pay? For those interested solely in the VR content, you have to play through the campaign and despite the length of the story, the overall lack of polish across the entire game makes the $60 US asking price a hard ask.  That said, I did have fun plaything through the more cinematic sections in the campaign and even the VR stages offer some satisfying moments.  When this reaches half the launch price, I say pull the trigger if you’re at all interested but if you only care about the VR content, you’re better off just playing the demo and moving on with your life

NIS America provided The VR grid with a press code for this title and, regardless of this review, we thank them for that!