The genre splicing continues and puts VR to the test in all new ways with Ancient Amuletor; mixing tower defence and wave shooters all in first person.  Take the roll of an Amuletor and destroy the onslaught of historically stylized enemies before they destroy the crystals blocking their path and claiming victory over you, and maybe a few of your friends. 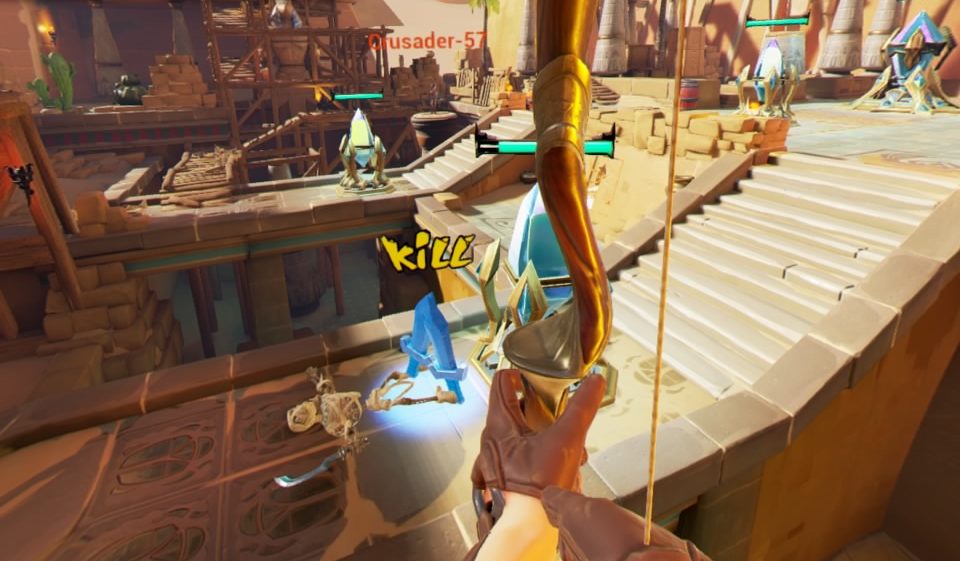 The bow and arrow is by the far the most fun weapon in the game!

It’s move support only here, and you’re going to need to 2 of them, as well some arm strength to conquer what lies before you.  Utilizing both controllers and choosing a specific player type initiates some innovative ways to use this old tech. Drawing and firing an arrow is simple enough, bring you controllers together, as if notching a bow, pull back and release.  Casting a magical blast requires you to summon an energy orb with one hand, then catching it with you scythe-like wand and whipping it at your desired opponent.  The musket is simple enough, point and shoot with a flick of the wrist to reload and lastly the puppeteer who sends a golem on the battlefield to kick some ass, like throwing a grenade, and than waving your arms frenetically to dish out some damage.  A new character introduced, the Viking, throws axes, fish, hammers…whatever he brings up and you just fling objects as fast as you can  Each the 5 class types all have their own pros and cons so your plays style will steer you to your ultimate warrior.  Each weapon/character has a deadlier special attack which can be activated after you kill a certain number of foes, allowing you fend back the unrelenting menace at a pivotal point and preparing for the next wave.  The weapons are also upgradeable to further dole out the damage, though they can only be upgraded once..

While this meant to be a stationary experience, you can transport to and from predetermined platforms on the map, allowing for a different view of the action and getting you closer to where you need be to dispatch your assailants.  It’s a great way to add a sense of control and danger to the game with harder difficulties and later waves forcing you to hop around the map frenetically to protect your crystals.

All of that is well, good and fun enough, but the addition of (up to) 3 player co-op multiplayer makes the game not necessarily easier, but way more fun as you team up to annihilate the opposition. Single player though challenging on harder difficulties, just isn’t as enjoyable as the combined effort of you and few other Amuletors. Jumping from platform to platform, blasting away enemies to narrowly save a crystal from destruction is great.  Unfortunately their is not in-game mic chat available, which definitely hinders the co-op side of the game, but given the simple mechanics at play, it’s not a deal breaker. 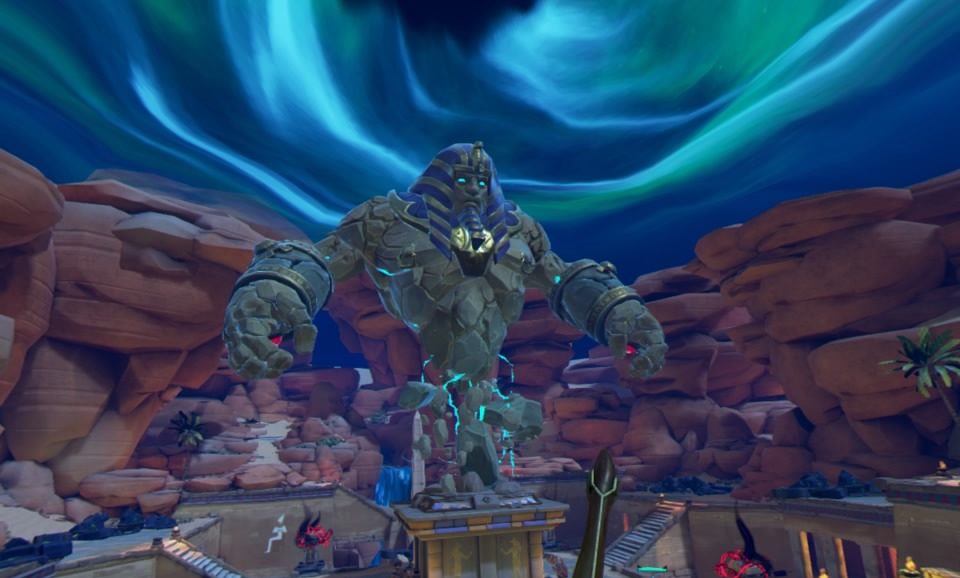 This guy is awesome, epic and a pain in the ass!

The visuals here borrow heavily from earths’ yesteryear with Egyptian, Roman and Norse inspired enemies and levels, as well as a few more fantastical takes on human lore.  Everything is cartoonish and exaggerated but carries enough detail and care to not detract from the game, which is great you will see the same enemies over and over again.  The levels look good as well with highly detailed stages surrounding you and the different vantage points hammer home that a lot effort went into making these look good.  The audio is no slouch either with guttural grunts and groans accompanying every hit as well as a host of sound effects which match the action before you.  The soundtrack is also to notch carrying with some epic fantasy tracks that make you feel like you’re a apart of something important.

After the recent FREE DLC add on ‘Into the Ice’, the single player campaign now consists of a tutorial, 6 levels with multiple difficulty modifiers and the promise of still more to come.  The 6 stages available offer a few level specific challenges and advantages, multiple traps are in some to aid in your efforts, while other contain environmental hazards for the encroaching horde, like a collapsible ice bridge in the new Viking level  .  Multiplayer has you joining or hosting a game, playing 1 of the campaign levels where completion of all the waves yield you a big ‘Victory’.

With 5 characters to choose from and each controlling completely different and the ability to switch them on the fly you can mix up how you want to play at a whim.  I personally found 3 of the classes to be substantially less fun than the others.  The Archer is my go to character, but the dual musket wielder is a close 2nd.  The magician I found to be hard to control with blast often going nowhere near were I wanted them.  The puppeteer, unlocked after beating level 2, was also dull with me chucking a small doll in the path of an enemy and swinging like a mad man as the spawned golem swings his arms, smashing nearby opponents.  He did seem to be a popular character online though so maybe after a few more play throughs he may grow on me.  The latest addition, the Viking, was hard to control and while their is an auto aim here to assist you, I found him to be the least intuitive character out of all the ones available, though he looks great and had some really good arm tracking. 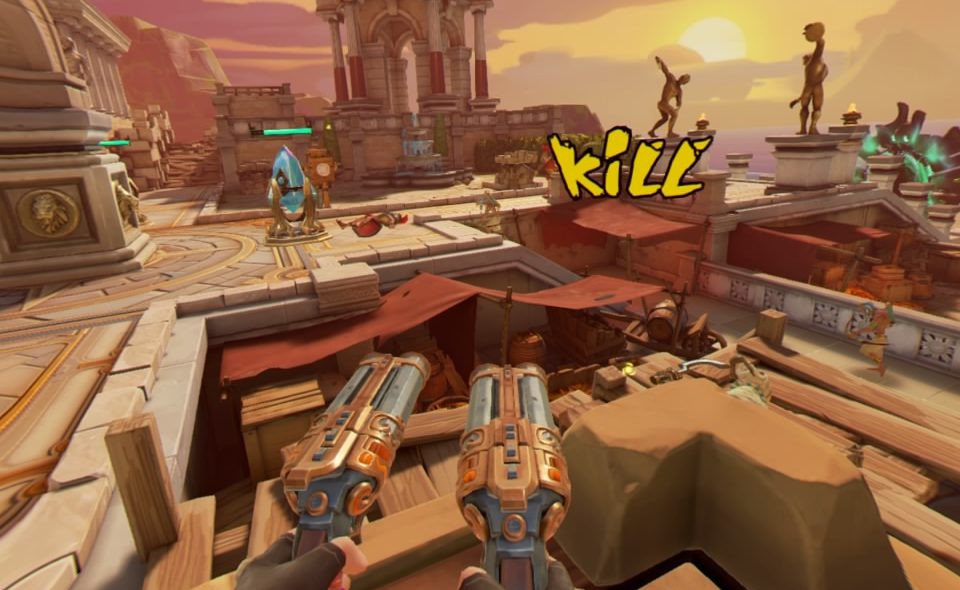 Besides the viking and wizard, the rest of the classes all work well with the auto-aim here helping you make those perfect shots just a little more perfect.  Some levels contain traps you can trigger, aiding you in those tough spots which is definitely needed for playing solo. The teleportation mechanic works great, though in multiplayer 2 people can share a platform and your avatars can get in the way of the action though this is a very minor issue.  After playing through the campaign, I could care less about it.  It’s fun, but repetitive, even with the boss battles their to mix up the action.  The same could be said about the multiplayer as well, but I found myself enjoying it way more as this is a game clearly designed for friendly co-op.

There a few other issues here.  Tracking can be spotty at times, though overall I found it worked really good.  The magician and archer both suffer from some extra movements that can miss on occasion, forcing you to miss your shot.  I also experienced some collision detection issues where shots impacted with no effect, though this was rare. 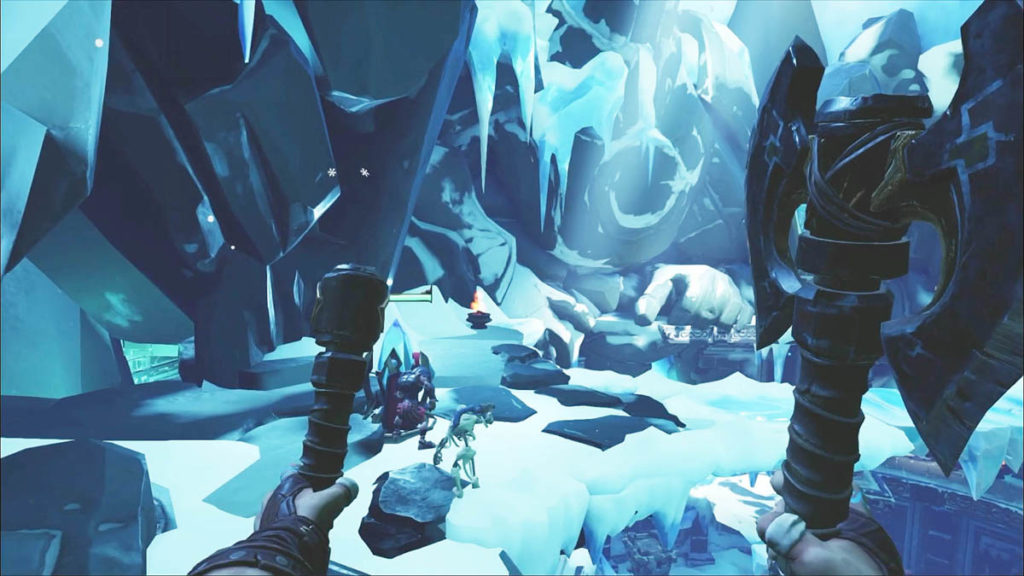 Get your throw on with this dual wielding berserker in the new, very tall ice cavern level!

This is a solidly built game that uses the move controllers in both familiar and new ways and is quite fun.  Each map does feel different and the variety of enemies spices up the action nicely.  If you are looking for a new experience in VR, this is definitely something to pick up and play…just maybe do it in small doses.

What would I pay? In it’s current state, $30 is probably an alright ask. The level of polish offered is top notch and the added content(still more coming) fleshes the game out a little more nicely.  Good Stuff.

Time of Virtual Reality supplied theVRgrid with a review copy of this game and, regardless of this review, we thank them for that!