Our 2nd foray into VR pool has us looking at Hustle Kings, a game that has been around since 2009 on the PS3. This slightly updated VR offshoot from 2015’s PS4 release brings VR pool to a new level with intricate controls and a tonne of customization options. This may be the best game version of pool I have ever played, but it still isn’t as fun as the real thing.  Also, I am not a pool player IRL so my knowledge of the rules for all the different games is minimal. 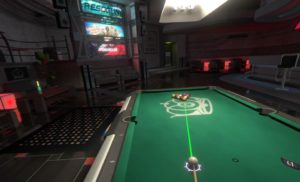 Ported from the non-VR version, even the advertising banners haven’t been updated!

I stuck with the DS4 controls for maximum enjoyment of the game.  The Move support just didn’t feel right and was a little more convoluted, hampering fun and requiring movements to fill power bars and button combinations that just didn’t make sense.  The tutorial here is recommended and explains all the nuanced controls, which will be needed if you want to conquer the game at its hardest.

It is worth noting that there is a free non-VR version for those that are curious about the controls.  The only difference between this and that version is the immersion of VR.  The rooms are now all around you but it’s just for show as you can only navigate around the table.  Everything looks fine with rooms doing a great job of mixing up the surrounding as well as table designs, ball designs and even a cue change ups.  The rooms range in size but without any activity happening, they all feel a little lifeless.  The advertising on the walls is humorous though, as they clearly haven’t been updated since the 2015 release.  In VR, with motion tracking, lining up your shots is a little easier affording you views and angles unavailable in non-VR.

The sound effects guys did their job well with all the sounds of the pool table sounding like they would in real life.  The soundtrack and looping songs are as generic as can be and will probably annoy sooner than later though they are inoffensive enough and can be customized a little in the options menu.

Multiple game modes are also here with all of them being available in online multiplayer as well as offline exhibitions.  The in game currency (HKC points) are what is used to purchase unlocks and wager your way into online games when where you can win or lose these points.  For those that are committed to mastering this game, online mode in where you will spend most of your time challenging and answering challenges in your attempts to conquer all.  There is a local multiplayer option here, but unless swapping your controller and HMD every missed shot sounds fun to you, it’s more trouble than it’s worth. 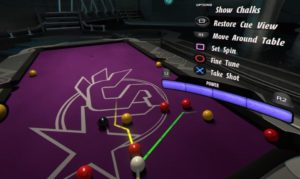 The controls are complex, but they do work!

All of this works well enough but a few key issues just annoyed me.  Though I did appreciate the controls, some may struggle with the intricacies, especially when online play limits shot time.  That may be part of the challenge of getting better, but it gets irritating after awhile, especially when pitted against veteran foes.  Also, harder AI settings will have you being stomped without hitting a single ball and those matches just make you wonder why you are playing this at all..  Matchmaking worked and it took no more than a minute to find a game.  Setting up your own is easy enough, though you may be waiting a while for others to join.

Overall this alright.  The physics at play are solid enough and the game feels like pool, but unless you are a pool nutcase, this won’t hold your interest very long.  The main drive here is to keep playing, to get more HKC points, purchase stuff and keep playing.  The unlockables add some fun variants to your balls and cues, but it’s just for show and will take you a lot of time to get them, only to be bored by their presentation in mere moments.