Fantasy games seem to be ripe for the picking in VR and archery games are a dime a dozen meaning games in either genre better step up or get washed aside as either genre is packed full of VR titles.  Sacralith is a cleverly disguised Tower offense title where you alone must defend your allies from hordes of enemies as they traverse the landscape in search of stone that will allow them to control dragons. 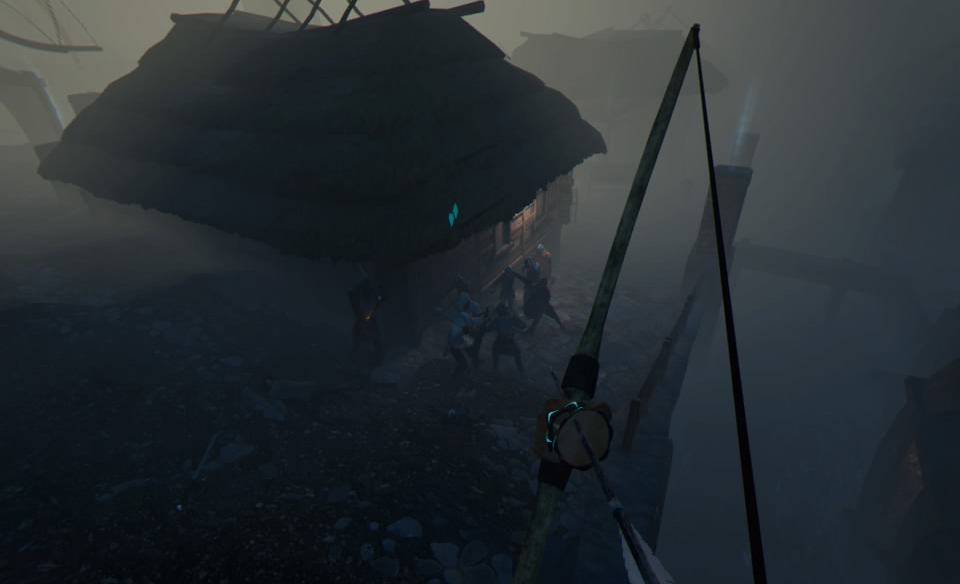 There is only 1 major gameplay element in here and that’s firing arrows and if you have never fired an arrow before in VR, 1) That’s amazing, and 2) You need 2 Move controllers to do so with one hand to hold the bow and the other to grab and fire your arrows.  You can choose left or right handed for those that need to switch and similar to the games QuiVR or Ancient Amuletor, you can teleport to specific nodes around the map as you help your compatriots in there quest to fight there way ever forward through every stage.  You are actually in no danger as the enemies focus all their efforts on your friends and not on you but because of that, keeping that dynamic duo alive is all the more critical because if either of them falls in battle, you fail.  Thankfully it’s not plain old boring arrows you’ll be firing as soon enough you unlock upgradeable buffs for your arrows that allow you to release multiple arrows at once,  freeze enemies or even bring them back from the dead with helpful arrows like healing or increased damage buffs that affect your friends making a fun balance between dolling out the damage yourself and aiding you allies with temporary powers and healing.  Each stage has your friends travelling toward a goal and it’s up to you to help clear the path  and keep them alive by whatever means necessary with rewards for head shots and combos coming in the form of time slow power ups, extra damage for yourself or shields for your buddies which are represented by icons floating above that kill. 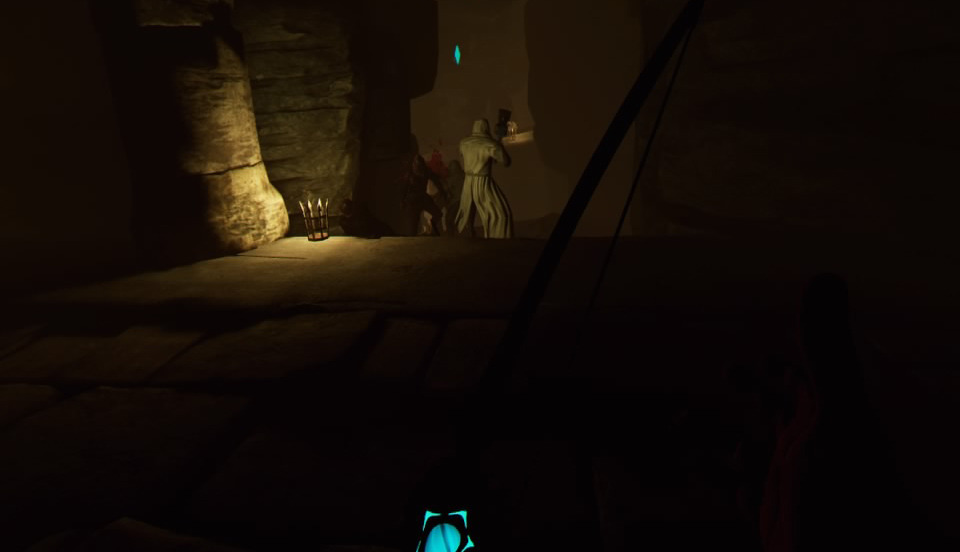 Never let these guys out of your sights!

Sacralith looks stunning on the PSVR with some realistic environments and character models inspired by The Crusades.  It’s clear a fair bit of motion capture was used for every NPC in the game as they behave very organically, reacting to your arrow impacts and the battles they find themselves in.  It’s not 1:1 when it comes to hit detection, but does a commendable job, especially when you consider just how many people may be on screen at any given time.  Lighting effects are also on point making for one of the more realistic games we have seen in the headset though it can often be hard to see all that fidelity at play as the game is often times dark and sometimes too dark, bathing everything in shadow making it very difficult to see not only the battle happening right in front you but even your hands, making aiming in these moments a guessing game.  There is no reason for the game to be that dark as the game looks beautiful and runs perfectly fine during lighter sections and adds an unnecessary level of frustration to an already frantic game.   You’ll visit a variety of locales from the opening forest stage, mines, a city and a few more with each looking unique and spectacular.

3D audio is in full effect and while much of the game is the hectic sounds of combat, you’ll hear the occasional sounds of your men as they bemoan your efforts when you miss and praise you for accurate shots.  The opening musical number is somewhat of a treat with some fantasy action music playing throughout the campaign that blended seamlessly with the action, except for the bridge scene which rocks in its own way.  Cut scenes are interspersed throughout the campaign and while the story isn’t to in depth, there’s enough of it here to carry the game. 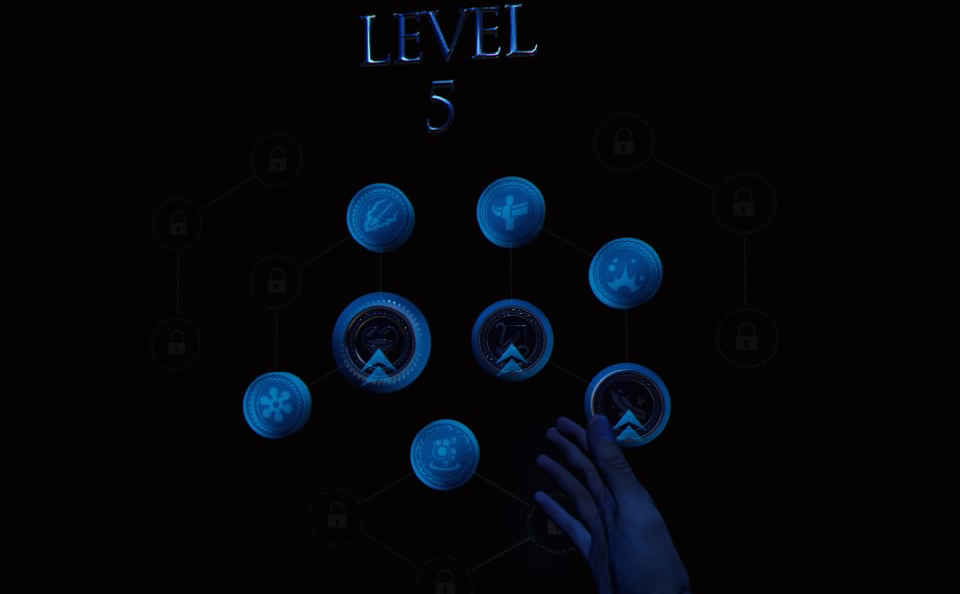 Plenty of unlockable powers and upgrades!

If you love bow and arrow games, then you’ll like this but firing your weapon and moving from point to point is all you do through the roughly 2 – 2 1/2-hour campaign and it gets increasingly challenging.  As you unlock more arrow types, it can be cumbersome to pick and choose the ones you want, even with the slow-motion in effect and I often defaulted to keeping my heroes healed above anything else.  That did change once I unlocked the freeze spell, which kept enemies frozen in place allowing for easier headshots and thus more chances at buffs for my arrows and soldiers.  Each spell can be levelled up and during your 1st playthrough you won’t unlock everything you can making multiple playthroughs slightly different as you experiment with the different powers.  I had some issues with the game detecting my arrow grabs which caused some initial and on-going frustrations, but once I became familiar with the game’s mechanics, missing those grabs didn’t affect me in any significant way.   The teleportation might offend some, but it’s necessary here as there wouldn’t be any other way to hop from vantage point to vantage in a timely fashion and wasting precious seconds on anything other then firing that bow could cause your brothers some significant harm and I truly didn’t mind the locomotion mechanics implemented in here. I wouldn’t have minded some smooth turning options as the pre-set incremental turns often times put me in a position just slightly off from what I would have liked in relation to the PSVR camera system. 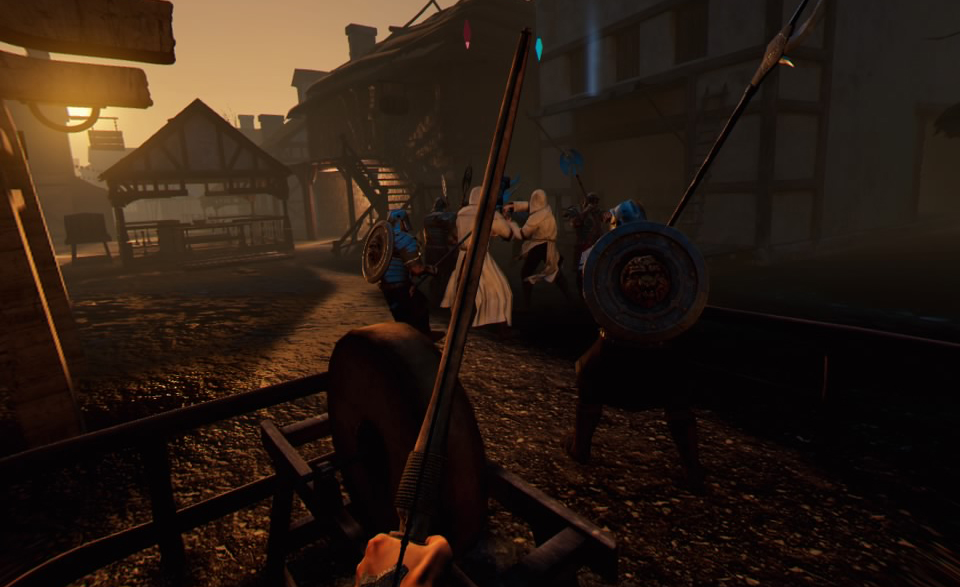 Some views put you very close to the action.

Sacralith chooses a very simple formula when it comes a VR archery game and embraces those choices by giving you plenty of attack options and plenty of enemies to shoot.  The campaigns length may be on the shorter side, but it won’t take to long for your arm to start to feel the burn as you draw arrow after arrow in mechanical fashion making the story’s length feel a little more appropriate.  It offers epic and frustrating moments but when combined with the stellar presentation, I can’t deny how much fun I had here though I did admittedly play in smaller doses as my arms just weren’t up the tasks of the extended and monotonous play.  If you aren’t sick of firing a bow in VR, this is a very solid title and one of the better ones in the genre.

What would I pay? $20 is right on point for this and even if you only play through it once, I think you’ll be happy.   Once again, it’s just endlessl firing arrows at the NPC’s in front of you, but if you are down for that then it doesn’t get much better then this.

Odd Meter provided The VR Grid with a press code for this title and, regardless of this review, we thank them for that!