VEV was made a VR launch title back in October but garnered so little attention that even now almost no one talks about it.  Thankfully the devs did right by VR in making all of the games content available to be played in that mode.  Unfortunately, VEV is a somewhat imbalanced survival game, which is a shame because the premise of this game is interesting enough, but the execution is somewhat flawed. 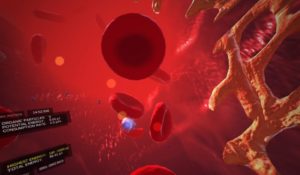 The blood stream is definitely the best looking level!

You control a microscopic single celled organism called a VEV and its up to you to survive for 15 minutes in each of the levels presented; 5 readily available and 3 unlockable ones.  Controls are simple enough; steer, slow, boost, absorb and repel.  To survive you need to absorb little bits of matter to increase your energy, which constantly depletes as you navigate these levels.  All of your limited abilities increase energy consumption so you need to constantly be aware of how you are using your energy.  Add to this other organisms that try to consume you and chase you throughout a level and the difficulty gets ramped up significantly.  In order to make any progress you need to adjust your VR turn speed, available in the pause menu.  If you don’t adjust this for the latter levels, you stand zero chance of succeeding.

The predetermined time of 15 minutes is a problem as it is just to long or maybe the score of 1000 seems a bit high.  Levels appear to be randomly generated and as such you never quite know where to go and a wrong direction could easily spell certain doom if you lack energy. The intro level, fresh water, soil, blood and cerebrospinal fluid are the immediately available levels, each getting successively more difficult.   The cerebrospinal fluid level has you immediately being chased by multiple organisms that never let up from start until the time limit, it may be designed to be challenging but its mostly just annoying.  Besides each level in the menu are top scores and I am baffled at how people scored as high as they did.   I never unlocked the 3 bonus levels myself as the process to do so was just too tedious.

This game is ultimately about survival and it’s just not that fun to survive when given so many obstacles.  The matter you need to consume is scattered throughout each level though once you get to know a level you’ll begin figure out the more likely places matter tends to show up.  The problem with that is you may be playing a lot to finally get that successful score.  Throw is some malicious and unrelenting attackers and I found myself struggling to stay ahead of them, let alone try and collect enough matter to win.  The energy objectives combined with randomly generated levels and enemies makes this game just feel unbalanced and if you succeed it feels like luck more than skill.

The visuals look alright, some stages just look better than others, but it all looks good.  The stand out level was the blood, it just seemed more lively.  I never viewed the 3 unlockable levels and doubt I ever will as the game requires you to have a score of 1000 in all available levels.  Some neat little effects and cooler looking microscopic organisms all bring these stages to life, especially if you are actually familiar with some of these biotics.  It has a good look and feel as each stage does do a great job of separating itself from the others. 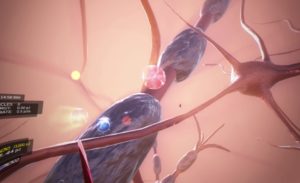 I have no idea what these round cells are called, but they don’t feel pity, or remorse, or fear. And they absolutely will not stop… ever, until you are dead!

The audio effects here are ok I suppose.  Nothing really stood out, but nothing detracted either.  The soundtrack is a mix of some light techno that fits well with the game, though I did start to get annoyed with it, but that could have just been me getting tired of that current play through.  I did like that VEV utilized the speaker in the DS4 controller by having each levels introduction and in-game notifications spoken to you through that speaker.   It’s a feature very under utilized and I liked it.

With all of that said, there is an alright game here, but it takes a while to figure out all of its nuances, and in the time it’ll take you to learn everything you need to be successful, you may just be sick of it.  The imbalance between all the factors in this game just makes it frustrating.  15 minutes may sound like a short time but in this game it feels like twice that much yet still not enough.  Add to that if you get any less than 1000 points of energy by the end of that time and you will be forced to play through again.  It just gets draining after awhile.

What would I pay? $5 is a fine asking price.  The content easily justifies the low cost for this title.  The question really is long term enjoyment vs. short term frustration.  As I said there is an alright game here, but it may take you longer than you’d like to appreciate it.