Wave shooters get a bad rap in VR as there seems to be a never ending supply of them and with each new release these shooters need to be different or suffer from mediocrity.  DWVR strives to be better than most PSVR wave shooters, and in some ways it is, though a bunch of technical hang ups and design choices make this game feel borderline busted at times. 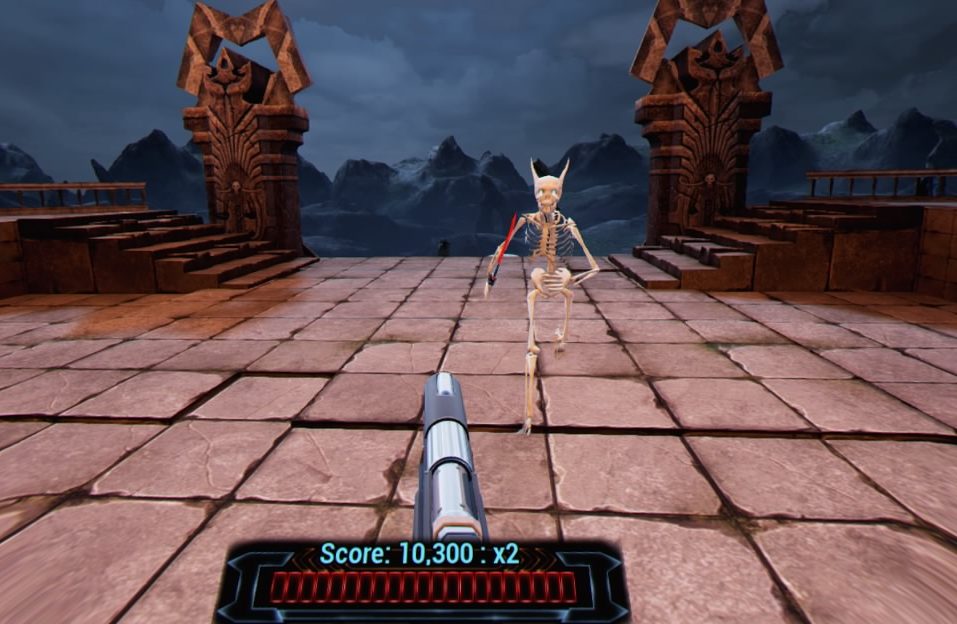 The first few waves don’t offer much challenge…look at this guy, he’s so cute!

There isn’t a lot of backstory, in fact there is none that I could find.  Your starting area is on a space ship and contains your menu, weapon choices and a shooting range.  Picking a stage gives you either a  predetermined weapon set or whatever you selected depending upon each stage, and your are set to defend yourself against 5 waves of enemies.  All 3 available control types are here, which is awesome and I’ll cover them individually.

Move controls are the only dual wielding option in the game and teleport is the only way you can navigate around the map and click turning is your only available option, besides turning on the spot.  From the weapon menu you can choose what type of weapon each hand holds and your off.  The one major stand out with the move controllers is the addition of a slo-mo mechanic when you teleport which eases the pressure a bit when those tight situations come up.  Additionally you also also get a dedicated sword hand in this mode, and while not the most intuitive mechanic(basically if you touch something with it, it dies) it’s undeniably fun to hack through enemies and reflect their bullets back at them ala a lightsabre.  The sword physics may be on the simple side, but slicing up baddies is still a lot of fun!

DS4 plays very similar to Farpoint and is usable offering smooth locomotion and teleporting which is awesome, but still no free turning as click turning is the only option in the game.  I found this to be the weakest of the 3 methods as aiming with DS4 by physically pointing it in the direction of the enemy just felt unnatural and it showed in my performance.  It just didn’t feel very good.

Lastly is Aim, which is definitely my favorite control option allowing you to freely roam whatever map you choose with teleportation still being a supplementary option.  This was the most comfortable way to play offering natural feeling controls that just made the overall gameplay better. 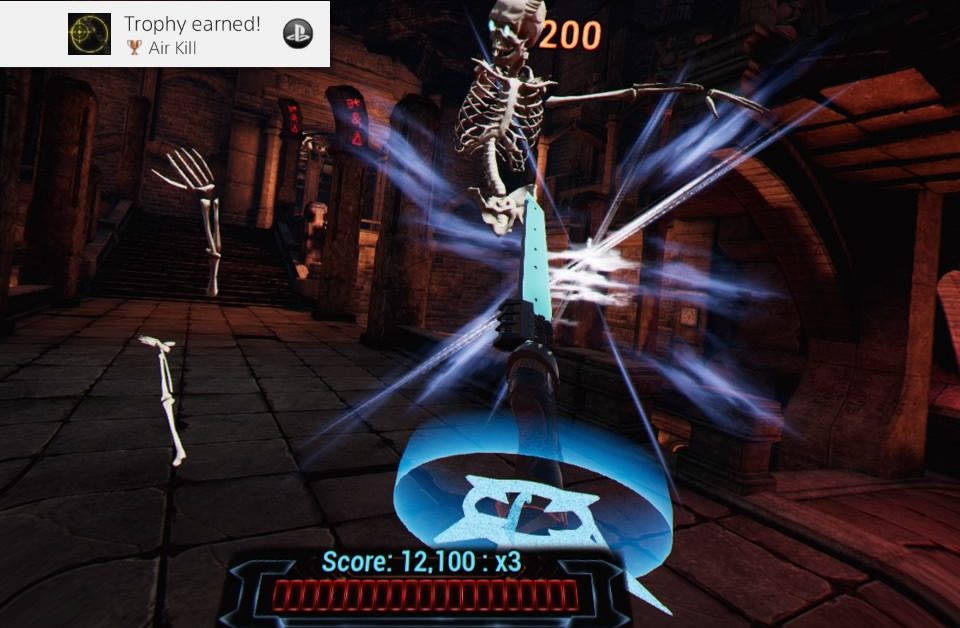 There are only a handful stages available and they carry with them a very broody and gothic style.  Dark caverns and seemingly run-down castles with giant statues of ancient gods litter the maps and hint that whatever world you are on is both familiar yet very strange.  Weapons all look good, as do the enemies though sometimes their animations can be a bit…erratic.  Skeletons gently float down when jumping from a high ledge or get caught up in the terrain while climbing.  They slide across the ground or just look odd when they die, falling down in odd ragdoll shapes.  It’s nothing game breaking but a little more touch up on those animations would go a long way.

The audio falls into the same category as the only 2 audio options are silence or deafening.  No music greets you and I thought something was wrong with my headphones until I chose a level.  No music here either, but you can hear the enemies which is great if they get to close. The problem is that oftentimes when they were very far away from me, it sounded like they were breathing down my neck, forcing me to panic and teleport away only to realize that the guy making the noise was nowhere near me.  Your weapons (and the enemies) are really loud and pack an acoustic impact every time they are fired.  Loud guns make me feel more powerful so I liked just how much each weapon popped.

With 3 different stages to choose from spread out over 16 different level choices (easy, med, hard, extreme) and 4 slightly different modes there wouldn’t seem to be a tonne of content here but what’s offered up is actually pretty substantial.  The pace gets absolutely frenetic at the higher difficulties (and even the lower ones) and you’ll back-pedaling a tonne as the enemy assails you from all sides of the map.  The variety of enemies is alright with each offering their own attacks, some armed with close range weapons while others shoot guns and magic blasts at you, forcing you to be very quick on your toes lest you become overwhelmed.  Each stage has a boss battle and those offer their own unique challenges as well. 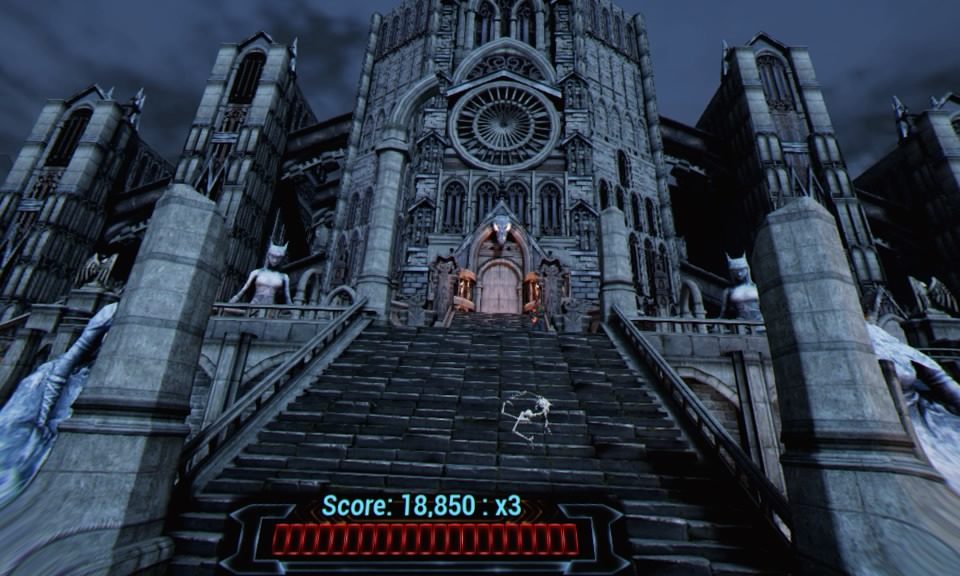 The stages have a macabre and gothic look and they look pretty good!

The additional modes are individual boss battles where you fight a few rounds specifically against the 2 bosses in the game on multiple difficulty settings.  Drone Assault mode has you facing endless waves of drones in attempt to get the highest score you can before dying and shooting gallery which, is really just more of the same thing.  All the modes felt similar just with ramped up difficulty and though they were fun, after a round or 2 I was a little bored.

I encountered calibration glitches, visual glitches and gaming glitches throughout my playthrough and though individually none of them are a big deal, when combined it makes for a game that needed to stew a bit longer in the pot.  My screen when pixelly black on more than one occasion making the game very hard to play.  Texture pop ins happen frequently, I had an enemy seemingly behind an invisible wall where my bullets wouldn’t penetrate, forcing me to close in for the kill.  I died and the mission said it was a success and vice versa where I completed a stage with out dying and my completion of the level didn’t register forcing a replay.  It all makes for a game that’s not quite broken, but feels like it needs a major tune up. 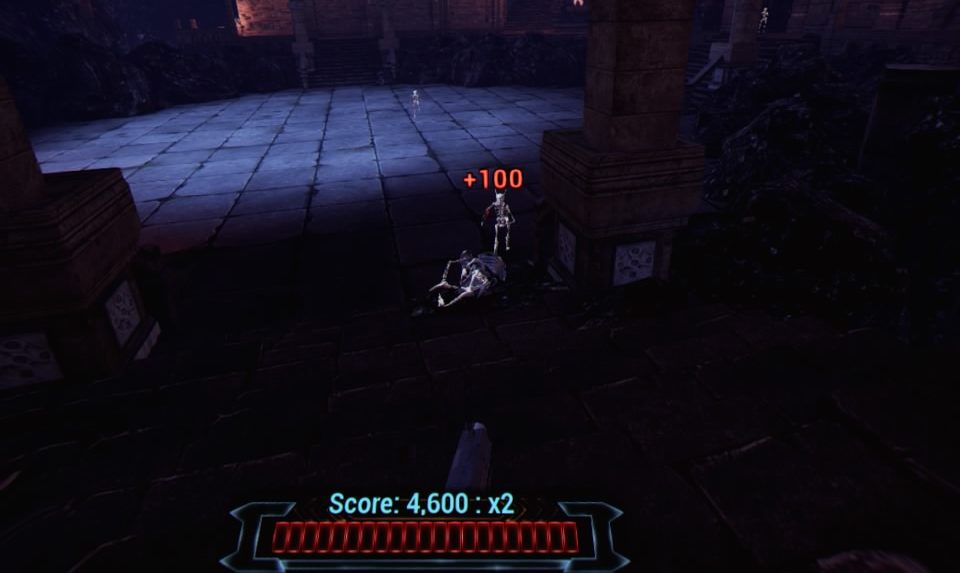 When these guys start coming in high numbers, all around you, the pace starts to get hectic!

I enjoyed the core of this game and once patches remedy a few of the more minor issues than this should be way more playable.  And although it as never advertised as being such, this kind of game is begging for co-op multiplayer and I hope the devs are thinking about adding that in a future update.  If you are looking for a different wave shooter for the PSVR, than this is it, but be prepared for a bumpy ride.  When it works, it’s a blast. When it doesn’t you can’t help but notice just how glaring the faults are.

What would I pay?  $15 is great value for what is here, if what was here worked flawlessly.  That’s not the case at all and in its current state $10 makes more sense.

Mad Triangles provided theVRgrid.com with a review code for this game and, regardless of this review, we thank them for that!