Not knowing a great deal about Hidden Fortune before installing the game on the Gear vr, I wasn’t sure what to expect or how it played. After the first hour of play, I took off the Gear headset, pleasantly surprised at what I had just gone through. 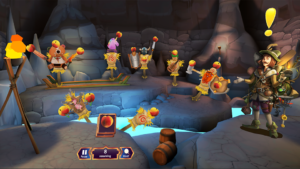 In order to get the gold you gotta hit all ‘dem peaches!

This is a VR game at its most basic, a type of Smash Hit(review here) variation where a quick tap of the Gears touchpad or by utilizing the Gear VR motion controller trigger launches a ball, or in this games instance, a magic orb. Said orb is often cast to target objects, solve puzzles and generally to move around the level.  The Gear Controller is employed as your wand and is effectively used to move before you and aim your orbs, it is certainly the preferred way of playing. I had to re-calibrate the controller on numerous occasions though as I found the the targeting tended to drift.

The stage is set in a fantasy cartoon world and your introduction is established in an airship, your base of operations.  Here you are given a quick tutorial on the basics of game mechanics as well as the story, which involves yourself being cast as a young wizard in the search for your lost family.

As the game starts proper, you are presented with 3 chapters. Chapters 2 and 3 are displayed as “Coming Soon” so until these are released, your only choice is Outcast Cove.

The cove is full of riches and treasures, a veritable stash of loot waiting to be uncovered.  Here you also find your guide; a strange, cardboard cut-out explorer with a bizarre penchant for peaches! The cove covers areas which can be traversed by throwing your orbs to the highlighted targets on the ground and you are instantly teleported to that location. Certain areas are closed until you receive the required level to unlock and move further into the cove. Increasing your level is accomplished through the acquirement of gold, which is rewarded through successfully completing games that the explorer challenges you to do. As well as completing the tasks you are given you are also required to locate all the hidden diaries dotted around the play area.

The challenges come in the form of finding specific items amongst a horde of other objects, hitting targets and solving puzzles, all by launching your magic orbs accurately. The only action you do perform is the tapping of the touchscreen making the game simple, effective and intuitive.

The cartoony graphics are very well drawn, possessing bold colours that are attractive, with on screen text also easy to read. It’s a very quirky and charming adventure puzzler which not only plays well but has the visuals to match.

The games main appeals are fun factor, ease of use, simple premise and the exploration incentive of unlocking new areas. The first chapter is not long, an hour or so of gameplay, depending on how often you return to the game to try and beat your previous scores. With the promise of further chapters in other locations, the gaming world it has created should be greatly expanded. It’s a VR title which works great and also excels at feeling original and fresh. 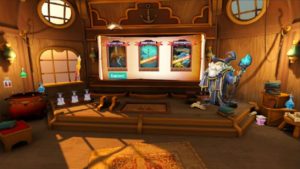 Your quest for riches starts on board an airship

I did find object targeting on occasion to be a bit ‘hit and miss’, clearly striking the required object but the game not registering it.  I was also stuck on one quest with the game stating that I still had two peaches to find. Having already found them all, I had to quit and restart. I found a few other little glitches and bugs, not anything to detract from the fun, but hopefully they’ll be rectified in a future patch.

In short, it’s an appealing game, enjoyable to play and explore, though not much of a challenge as its probably aimed at the younger players.  Still, I had fun and am looking forward to the forthcoming chapters.

What would I pay? At $3.99 this is ideal for the first chapter as it’s good to play but short lived. It’s unclear whether future chapters would be free.

Archiact provided theVRgrid with a review copy of Hidden Fortune and, regardless of our score, we thank them for that!