YAAAAARRRRR MATEY’S!!!! It’s time to take to the high seas as the captain of a pirate ship in the fantastic world of New Urth; full of magic, monsters and a whole bunch of enemy pirates.  From the helm of your ship it’s up to you navigate and command your crew as you sail against all manor of foe from other dastardly captains, bases & bosses in solo, co-op and online action. 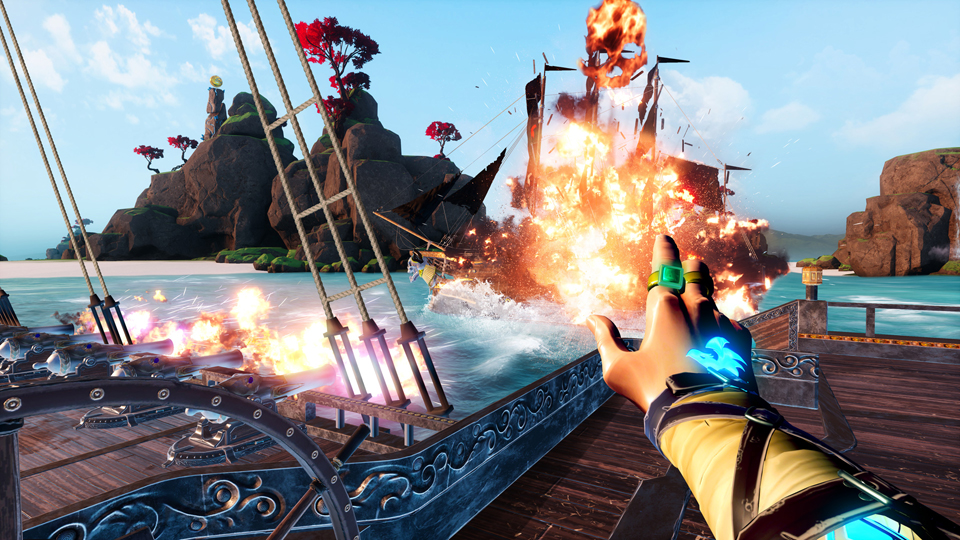 Very few ships can stand in your way.

While you are commanding a large pirate ship, this is actually a stationary affair as you never leave the helm of your vessel, but rather steer it by grabbing the wheel in front of you and reaching for nearby anchors to control your speed and turning along with your ultimate attack.  As such, you are going to need a couple of Motion controllers for the best experience as you’ll be frantically trying to perform all these actions in perfect synchronicity.   Steering your ship, firing your weapons, which is handled by aiming 1 of your Move controllers  where you want your shots to go whereupon a large reticle pops up indicating where your shots will head and timing your special abilities is a constant juggling act that will take time to master.  The DS4 is also supported and mimics the aiming mechanic with all the actions assigned to button presses, including steering with the thumb sticks.  For immersions sake, The Moves are the way to go, but I can’t deny just how much easier balancing all the controls and steering my ship was with the DS4 and I feel those using that controller will have an advantage against those who don’t when it comes to the multiplayer.  You can choose which captain you want at the beginning of the game, after you have unlocked them, with each having their own specific weapons and powers.  A few different modes are available aside from the 20-stage campaign, which supports 1 or 2 players, Warfare mode which gives you endless objectives to test your skills against or Plunder mode which pits you against up to 10 other players in competitive action.   Each mode utilizes the same mechanics as the others so once you get a proper feel for the game, diving into the other modes will feel instantly familiar and all the modes give you loot needed to upgrade the different ships.

The star of the show is the visual presentation as it looks beautiful on any headset though shines on the PC side of things.  Your ship, with a full view of the crew, looks impressive and large, but it’s the environments and enemies that makes what you are looking at outstanding.  Noticeably absent on the PSVR is your crew making the deck of your ship look rather empty.  The PSVR also showcases more pop-ins with the environments and ships lacking the finer details found on the PC headsets.  All of the visual shortcomings don’t hurt the overall experience as the gameplay is identical across any headset and even with those foibles, the overall presentation is still impressive given the scale of the game.   Your ship reacts to the ocean in proper fashion, getting hit my incoming waves and handles like a large vessel forcing wide turns and proper planning as you try and lead your crew to victory.  Throughout the game you’ll encounter smaller ships which are more nuisance then anything else but can overwhelm you in large numbers with the boss battles containing some massive scale boats.   It’s harrowing to be in the midst of an intense battle with ships all around you trying to take you down while fire reigns down from the sky from a nearby base all with the added chaos of a captains powers turning the tides of battle in their favor.  Just about everything in this game on the visual side had me truly believing I was a part of this strange world and for extra immersion, I played standing just to further make it feel like I was there. 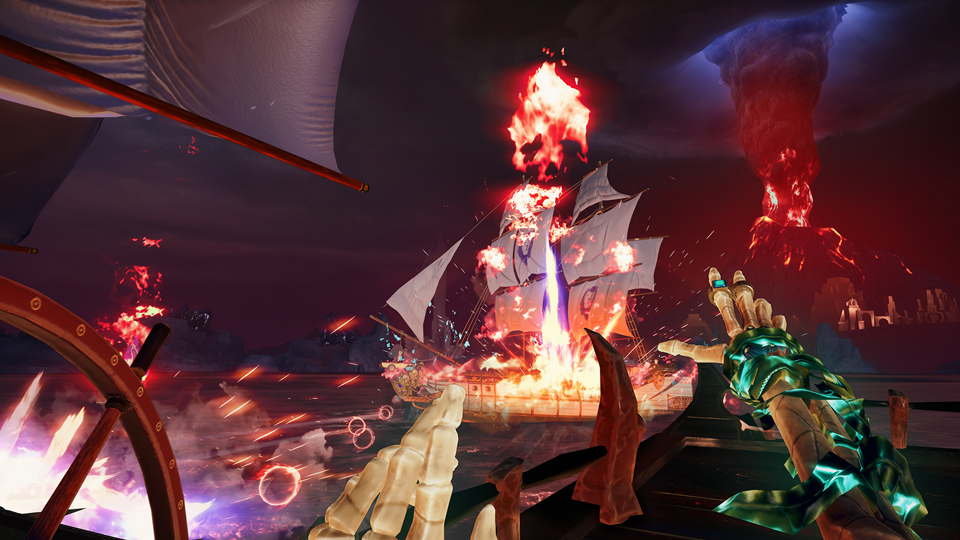 I love this stage!

Audio wise, this is just as impressive with the sounds from the game complimenting the action perfectly.  Your ship is relatively silent though you can hear the chants of pirates on enemy ships letting you know they may be nearby.   Sounds of the battles are deafening, in a good way, especially when you are along side a massive ship with both of you dealing out as much damage as possible while pieces of your ships fly everywhere.  For some reason, the developers chose to not have music play in tandem with the gameplay making many moments in the game a little too silent and I really would have loved to hear some high seas adventure music accompanying my journey across these dangerous seas though you do hear occasional one-liner from the captains at play.

I love the gameplay in here, but it’s not without its drawbacks.  Your crew, if you have them, is nothing more then visual flare, there to add that sense of realism but does little else and I couldn’t help but miss the crew and resource management system from games like Bow to Blood.  In this regard, Battlewake feels like a simplified version of similar games we have played in the past.  Not necessarily a bad point as I’m sure many will appreciate the light learning curve and intense action.  It’s very easy to just jump into an online match and not feel completely useless but that same simple gameplay had me getting bored after not too long.  That said, every time I took a break and jumped back in, I was enthralled once more by the fast and frenetic gameplay…at least for a little while. The upgrade system is handled by rewards earned through playing any mode and carries over to all modes allowing you to become a destructive force, which will help with the online battles.  The co-op and online play is the icing on the cake as it’s way more fun to pillage and plunder with a friend and if you can find an online match with a few other foes, thanks to supported voice chat, these are just as fun and help you hone your skills. 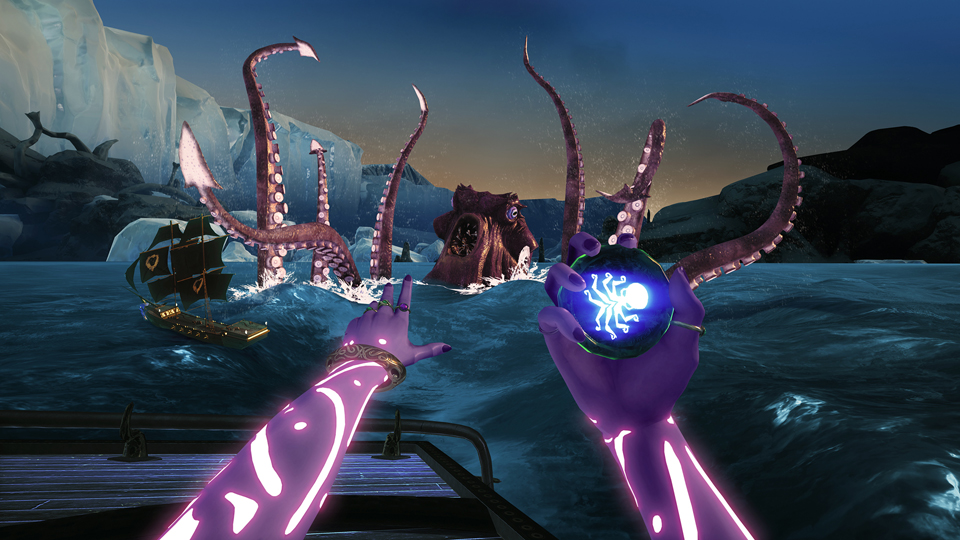 All in All, Survios has once again delivered a solid VR title that should appeal to a broad audience.  Longer sessions may start to feel a little tiresome but freshly hopping on and playing through a few stages is always a blast, especially when you are playing with friends.  It’s not perfect, but it does deliver some highlight VR moments and commanding a pirate ship just feels awesome!

What would I pay?  This is $30 and I think that’s an alright price given the level of polish and content.  It’s hard to find a VR game that supports this many players online with a few modes to keep you coming back for more.

Survios provided press codes for this review and, regardless of this review, we thank them for that!