If there is one thing the PSVR world is clamoring for, it’s more shooters.  The lack of them on the platform is noticeable and when the right one comes along it will be a system seller.  This is not that one.  What we get here is an FBI training game that has you shooting at targets while wielding a small variety of weapons.   It should be noted that this has been ported from the Vive, but given the differences in room tracking tech, the versions play very differently. 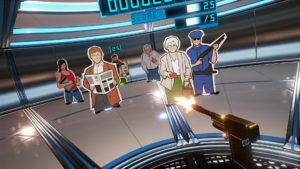 Yup, that’s the golden gun…I really only wanted to play Goldeneye after I played this game

Placing you in a simulator that changes when you complete a level, you are armed with a pistol and given the task of shooting targets, simple stuff.  You will need 2 Move controllers for this, but certain levels will only require the use of 1.   As the game progresses the difficulty increases as well as the types of targets ranging from bullseyes to cutouts of people and even vases and statues.  Every time I was introduced to a new target I was pleasantly surprised.  With 3 difficulty levels to unlock and choose from which include a varying amount of missions, all ranging from a minute or two you should be able to crush this games content in about 90 min or less.

The visuals are in no way astounding, but they do the job.  The weapon you wield carry the highest detail and look really well, especially some of the more notable movie inspired weapons.  The stages and targets all look fine.  Everything here is stationary so animations are at a minimum.  As a shooting range, it all works just fine.  Nothing broken, but nothing special here either…at least on the visual side.

The sound pops and with a good pair of headphones the gun in this game sound amazing.  I laughed in pure enjoyment at the sound of my firearms, the echo effects were nice as well and had me feeling like I was in a shooting range.

Now for the bad stuff.  Typically, your targets appear in front of you at roughly 180 degrees or so.  Shooting them is for the most part fairly easy and missing them feels like your fault, not the game.  However, the targets that appear on the edges of that 180 degrees become very hard to hit.  It ruins the game forcing you to take pot shots at odd angles just to hit those targets.  You can push through these levels with the firearms, but once you unlock knives and throwing stars, you are in for some annoyance and frustration.

Bladed weapons just don’t work well.  Requiring a simple flick of the wrist, anything close to you will be dispatched easily enough.  Further away objects become difficult to hit simply because your weapons just fall short.  Trial and error will have you getting past those obstacles, but the game falls apart when you are wielding these weapons and targets are at those 180 degree edges.  The PlayStation can’t seem to track your movements well there and the  games physics curve your knives in the air when you throw them having you miss almost every time, even when you adjust your throws.  Eventually you will just stop aiming and just whip knives as fast as you can in the direction you want them to go hoping one will connect so you can advance to the next stage.

While the game offers a variety of weapons, you don’t get to choose them, they are level specific.  It’s unfortunate as visiting previous levels with a different armament could offer more challenge or just more fun.  The guns themselves range pistols to SMG’s and switch between single and dual welding.  When the game works it’s great, but when it doesn’t you’ll be left wondering how the developers thought that releasing the game with such large flaws was a good idea. 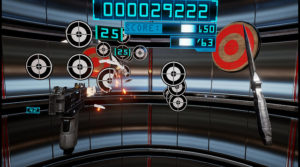 Dual wielding is sweet, but every time you see yourself armed with a knife, you’ll dread that level.

Local leaderboards are here as well as tracking your personal best.  It’s just a point summary though so you can’t actually compare time or accuracy.  Also the game uses the old school 3 initials as your ID, a nice touch for that retro arcady feel, but in this day and age it kind of stinks not seeing your user name on the leaderboards.

Ultimately this game falls short of expectations.   A simple shooting gallery ruined by limitations and sub-par tracking.  Add to that the relatively short play time and limited replayability and I was left wanting not more of the game, just a better one.

What would I pay? $5US.  There is fun here, but fighting with controls and bad tracking ruins it.  If it worked the way it was supposed too than full price would justified.  Unfortunately, it doesn’t.