It’s the future, the world has been ravaged by war, resources are scarce and people are just trying to survive the military government trying to oppress them.  You are a member of the resistance, doing what little you can to help restore order and sense of peace to the world, unfortunately that is not going to be easy.

I’m going to have to spoil a little bit of the plot here, so I do apologize for that.  Initially you (Gabe or Gabby depending on you gender choice) are heading a resistance military base, whereupon you are introduced to the world, it’s past events, some allies and your mech.  That’s right, the core of this game is defending against waves of enemies from the comfort of a giant ‘Gundam’ style mech.  After a story driven tutorial, your base is attacked leaving only you and a handful of survivors alive, and so your mission of revenge and retribution begins. 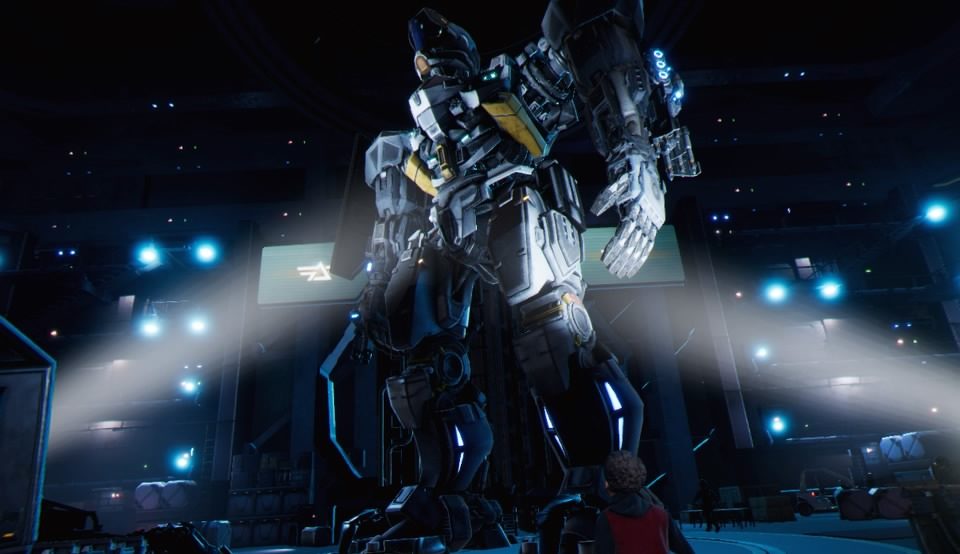 It’s important to note that this is an on-the-rails shooter, meaning you don’t actually control where your mech goes, just the weapons and arms.  It’s a game similar to Rush of Blood or Mortal Blitz as you automatically navigate from point to point all while dispatching incoming troops. Move controllers are the way to go here, giving you individual control over each arm and the corresponding weapons and defences each carries.  It’s a good setup but I struggled through the whole campaign just trying to remember the right button to hit at the right time; it’s not overly complex, but took me some time to get comfortable with the button layout.  The DS4 control scheme is less intuitive with your arms being locked on a central reticle and having an even more convoluted control scheme than the move.  It tracks your controller positioning, but with only one target the game automatically gets more difficult and losing direct control of your arms just plain stinks.   If you have the option, go with the Move controllers.

Each arm has its own weapon loadouts and more are unlocked as you progress through the campaign.  Simply aim your controller at your targets and unload.  Besides weapons, each fist has a temporary shield which is used to defend against attacks.  While your shield is up, that arms weapons cannot be used so it’s a give and take relationship between your weapons and defences.  Occasionally you will also be required to smash obstacles with you fists or catch the occasion health pack with your hands, but these moments only occur a handful of times throughout the campaign.  Unlockable upgrades expand your arsenal and can be switched on the fly one you unlock them.

Archangels campaign is broken up into stages interspersed with flashbacks and cutscenes.  The flashbacks give insight into who your character is, his motivations, and how he ended up where he is now.  After each mission you are given a menu-type screen where you can select upgrades or just chat it up with your fellow soldiers.  They all act like human beings which is very appreciated and these interactions reminded me of the old KOTOR games, though you don’t make any choices in the dialogue, just listen.  It’s worth noting that you can “talk” to your allies more than once in-between missions and it’s worth doing so as it fleshes them out,  the story, and the events unfolding around you. 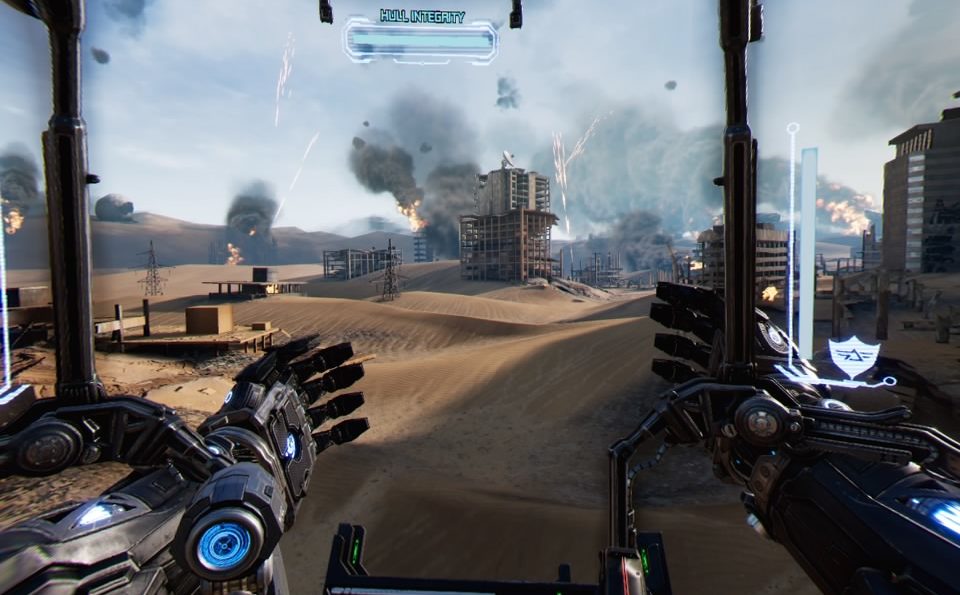 Your standard view of the action…it’s pretty sweet

Visually this game is equal parts impressive and lacking.  Your mech looks stellar with the cockpit carrying a tonne of detail that make it feel like I was in a mech suit.  Bringing your hands to your face and the general movement of your arms looks fantastic and carries with them a lot of animations and smaller details sure to impress.  The world around you is where the game takes a hit.  While nothing looks terrible, levels tended to lack any crazy details often seeming bland, lacking texture and depth that could’ve pushed this game into greatness, though an overall terrain change up later in the game did give the game an extra boost of color, which helped with the overall look.  Levels are static so any destruction you rain upon the scenery yields little more than debris that disappears as soon as it hits the ground.  Also, those between level cut scenes are all told with recycled animatics, something akin to StarCraft, where a character talks and shows up on a video screen, but those animations don’t really match the voice and repeat themselves often.  It works, but could definitely be better.

The audio as I mentioned does stand out with characters being given ample time to talk in between and during missions as well as yourself, making the story feel incredibly character driven.  Music is atmospheric and adds to the game and sound effects pop with explosions a gunfire effects that you would expect when manning a huge, giant death machine. 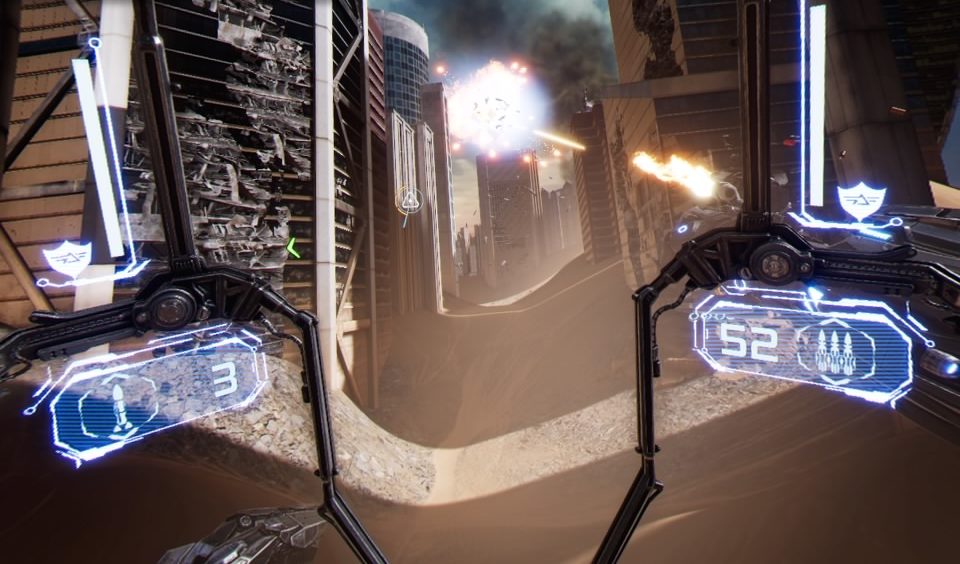 Destruction at it’s most mechiest!

My biggest issues with the game were the chekpoint system, which works as often as not, whereupon death you could be forced to watch in-game events over and over if you die at the same spot more than once…which I did many times.  What makes these moments worse are the verrrrry long loading times that you get to enjoy way to often, they seriously take like a minute or more.  Lastly is the repetition factor as this is probably one of the longest on-rails shooter I havee ever played so this may be best played in smaller doses as opposed to one long sitting. I never experienced any tracking issues whatsoever and if you feel the need to change control types, there is an option in the main menu so you don’t have to exit the game like most VR titles.

With a campaign around 4 hours, dependant upon difficulty settings and your own skills, there some decent content here, though some may feel like it’s a little light.  Once you beat the game, the only real reason to come back is to beat previous level scores or ramp up the difficulty and put your skills to the test, neither of which is something I care to do.  I enjoyed the single player campaign especially how narratively driven it was as it had probably one of the better stories in recent memory.  If you are looking for your next FPS adventure, this one should do right by you.

What would I pay?  $40 seems alright.  It has a decent campaign with a very solid story and most importantly, makes you feel like your in a giant mech.  Well worth playing through at least once.