Colossal Cave Adventure inspired the game known as Adventure, neither of which I have ever played before, however I do love Ready Player One (the novel, not so much the film) and Adventure was a large inspiration for the story as it contained what is considered to be the 1st Easter egg in gaming.  What this means is that, without ever having played any of these games, I am somewhat nostalgic for them as, by proxy,they have been a part of my gaming life in many ways thanks to not just pop-culture references, but by how they inspired and even started gaming genres that I enjoy today.  There is no story to push you forward as the game opens up with a few floating windows that break down your goals.  You start outside of the cave near a shack and must get into the cave and loot as much treasure as possible, bringing it back to the shack while avoiding enemies and bypassing the puzzles, mazes and odd-ball situations that pop up. 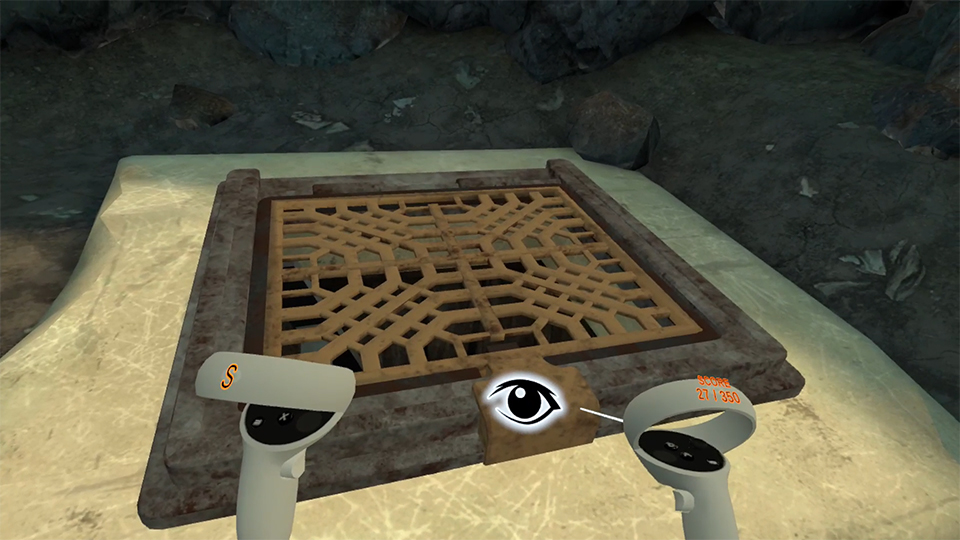 Interacting with anything isn’t that immersive.

The Original Colossal Cave was a text adventure where you typed simple commands to tell the game what you wanted to do and where you wanted to go and waited to see whether your response elicited an outcome or was in error.  In VR that guesswork is somewhat reduced thanks to you now being in the actual virtual environment.  Comfort options are very lacking and while I can excuse some omissions as they do favor that feeling of being in an old-school text adventure, by current day VR standards, what’s here is disappointing.  At the game’s onset you can choose your preferred language and from 1 of 2 comfort settings; Comfort Locomotion which maps turning to the controller direction while moving and implementing stationary click-turning with grips and triggers used for walking which I found extremely awkward to use.  Classic Locomotion is much more in line with most VR FP titles with thumbsticks used to navigate and click or smooth turning being options though the single smooth turn speed is a little slow.  The largest omission here is the lack of head-mapped turning meaning that if you look somewhere, you’ll start walking there so the only direction you walk is the direction of the thumbstick, regardless of where you are looking which can make for some awkward moments as I constantly had to adjust my thumbstick even though I was just moving forwards…more or less. 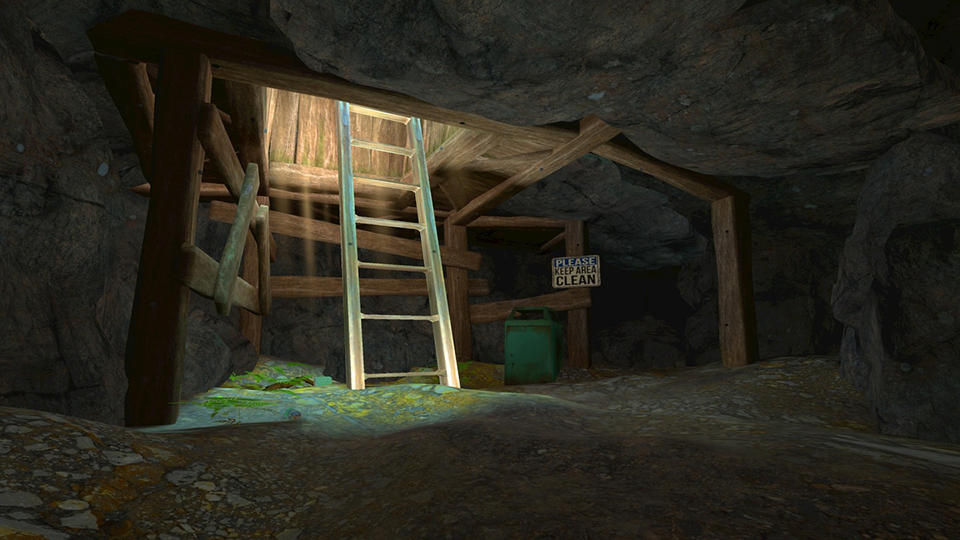 You’ll find a lot of weird locations in these caves.

Once in the game, you need to make your way into the caverns and begin your quest to get as much loot as you can without dying or giving up.  As you reach new areas, you’ll have access to maps which pinpoint where items are in the caverns and though you have no in-game body whatsoever, each of your Quest controllers is marked with the direction you are walking and your current score.  A few areas allow you to teleport too and from the shack where you can drop off or pick up items as needed and the further you get in the caverns; the more obstacles get in your way.  When you pick an item up, it is added to your inventory which is brought up by pressing a face button and to use an item you need to select it, then select use, then point it at whatever you think it will work with be it a foe, statue, bridge or whatever making each of these interactions feel faithful to the original game, but quite clunky by today’s standards.  In fact, my first go was nothing short of embarrassing as I almost immediately forgot how to score points and was so confused by the interaction system that I had to look up a guide for the original game which did help explain these mechanics a little better.  My second run went much smoother and with the gameplay mostly figured out, I began to delve deeper and deeper into the mysteries of this colossal cave. 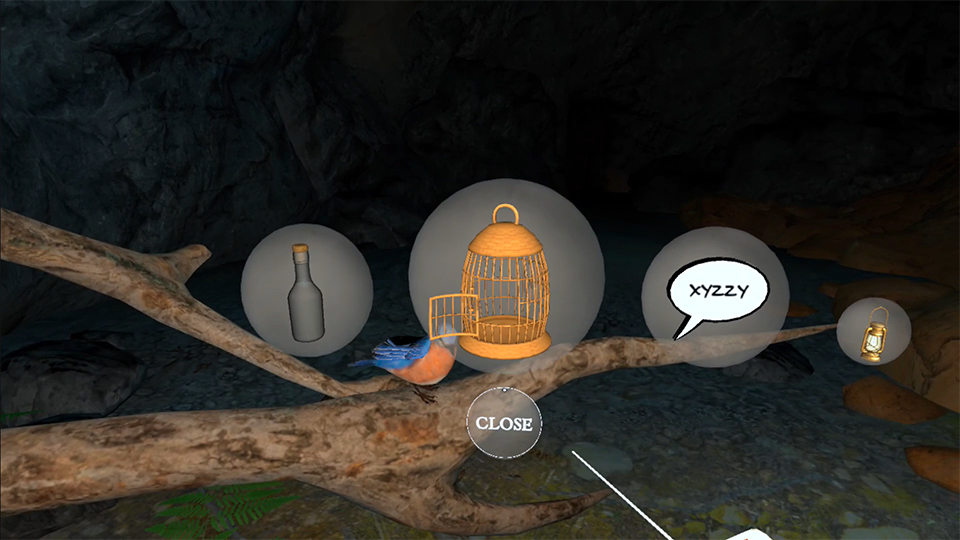 Using items is also rather clunky.

Those mysteries are where this game shines though by its nature, this is very much for more hardcore fans of puzzlers as there isn’t much else outside of each conundrum.  As you find items, it’s up to you to figure out when you’ll need them which can be very obtuse at times.  For instance, and this puzzle is explained in those introductory windows, you pick up a bird cage early on and encounter a bird who flies away when you get too close because, as it turns out, you are also carrying a magic wand that it doesn’t like.  If I wasn’t told to drop that wand, there would be no context as to how to solve this puzzle.  This carries on throughout the game turning this, at times, into a very frustrating game as some puzzle solutions have little to no context or rely entirely upon guesswork.  For fans of old-school puzzlers like Myst, this may be more acceptable but those looking for their next Red Matter or A Fisherman’s Tale will probably find the entirety of this experience rather tedious.  Still, if you can look past the lack of VR interaction and get familiar with what the game expects out of some of it’s puzzles, what’s here is satisfying, challenging and feels like a somewhat proper modern interpretation of a (very) classic game…as long as you can also look past the presentation. 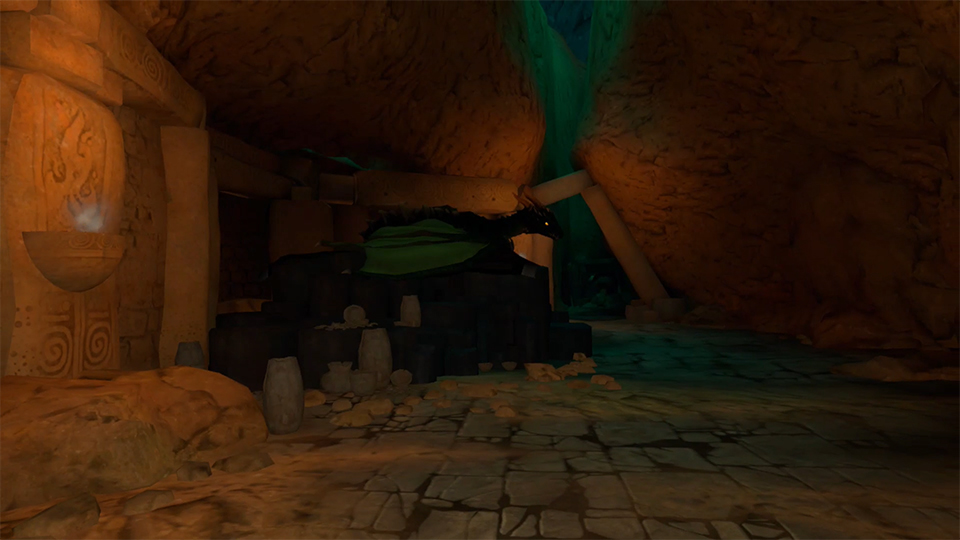 I don’t want to sound too harsh as, once again, this is a re-imagining of a 50-year-old game which had no visuals whatsoever, so in that regard, I’m happy with what’s here but what’s here judged to today’s standards is… rough.  Texture quality is flat & lacking, there are no lighting effects to speak of outside of your lantern which illuminates a small sphere around you and almost all the character and creature models look incredibly stiff & dated.  This looks on par with a lot of what we see from smaller studios and many puzzlers that pop up in app-lab though given the mobile platform, I can excuse these visual shortcomings as a) the game is fairly large & b) in my mind this should look sort of retro anyways so the “older” looking visuals were a reminder that this is a remake of an older game.  I know I’m making excuses for what many may consider to be a poor looking game, and that’s fine, but for myself, once I got wrapped up in the gameplay, many of my issues became secondary to the puzzle solving, at least until I hit a puzzle or maze I couldn’t solve.

Outside of the puzzles, I also enjoyed the audio presentation as it’s a pleasant mix of new and old with ambient noises of the caverns around you all sounding as they should be it the echoey drops of water, a slight breeze, falling rocks or whatever else, which is good as there isn’t a ton of music in here, giving these caves some isolating realism.  Also along for the ride is the narrator who, when grabbing or pointing at an item or the environment, will describe said ‘thing’ using the same script from the original game.  He’ll also describe events like when a Dwarf pops out of the ground to attack you or when you see a strange shadow across a chasm, and I found this to be a wonderful way of capturing the old text-adventure feel while fitting it on a more modern gaming format. 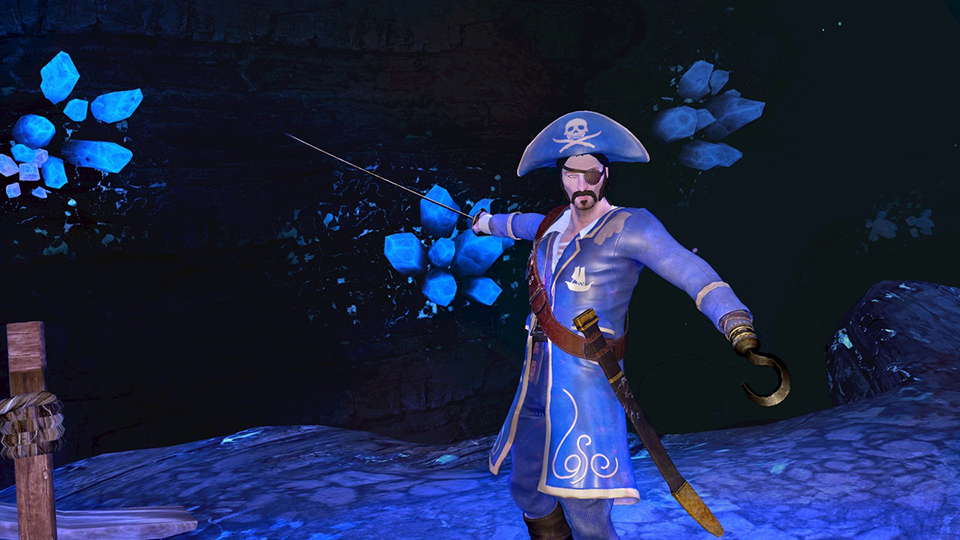 This guy, and his maze, suck!

I like (or maybe want to like) Colossal Cave,but there are multiple barriers to entry that I think may scare most people away and I can totally understand where those people are coming from.  It doesn’t feel like a modern-day puzzler, sharing much more in common with those late 90’s First-person endeavours and that in combination with the dated visuals and lack of VR interaction will chase away casual players. Add to that some very convoluted puzzles and trial and error solutions that can feel unfair at times and this can be a hard sell.  There’s also the rather lofty $40 price tag which I audibly scoffed at when I first saw it as I expected somewhere around half of that after playing a few failed runs.  There’s a lengthy puzzler here with plenty of replay value but for all the issues I mentioned above, and that asking price, I find this hard to recommend this to anyone but the most passionate of puzzle solvers or those who want to experience a piece of gaming history through a modern lens…or 2 lenses I guess.

The publisher provided press codes for this title and, regardless of this review, we thank them for that!