It’s not often, though probably happens way more then you think, that a film gets a sequel only in video game form, what’s even more rare is when said game is in VR, which is exactly what Like Father, Like Son is.  Taking place long after the 1993 film featuring Bill Murray, this story focus on Phil Connors Jr., a successful video blogger who return to his home of Punxsutawney, Pennsylvania to visit with his somewhat estranged family.  After a day of disastrous events, Phil decides to leave the town, only to wake up, forcing him to relive the same day over and over, fixing events and mending relationship around him, possibly learning a few lessons along the way. 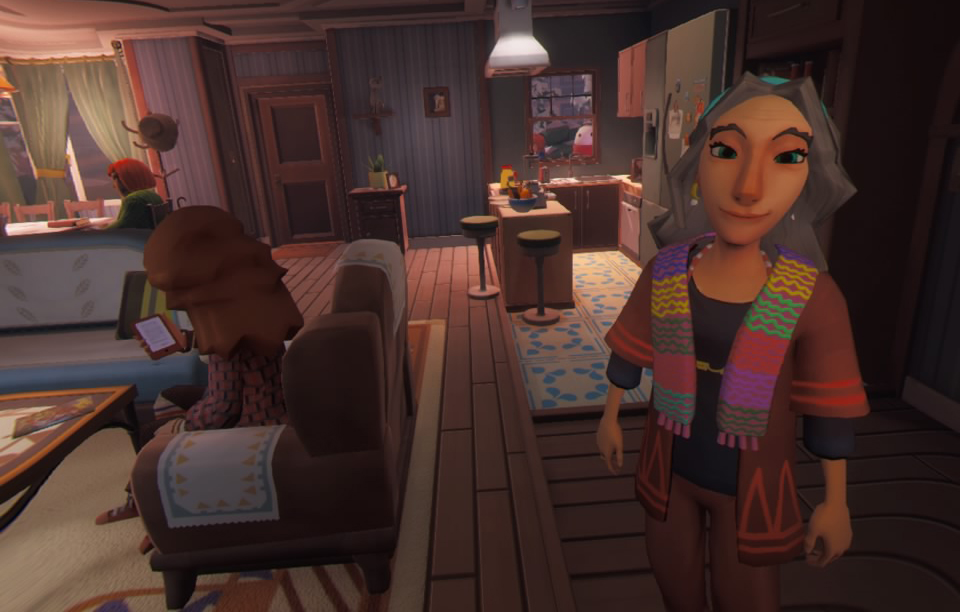 Every morning you get to greet your family.

This is from Tequila Works, the makers of one of my favorite VR experiences “The Invisible Hours” and I think that team was the right ones to tackle this project as they did a great job in that game of making repetitious scenes feel fresh after multiple plays, which is what you’ll be doing here.  Waking up in your parent’s house to ‘I Got You Babe’ playing on the radio, you get out of bed, can mess around in the room you are in before heading downstairs.  This is Moves only and there is no full locomotion in here as each room is broken up by nodes you can teleport too, typically performing some kind of job-sim type action like making breakfast, fixing a coffee machine, carving a statue or just having a conversation.  I have no problem with this kind of movement system in a game like this, though it is a little cumbersome to get in the right spot depending on what you may need to do, but the forced click-turning hurts the immersion factor here.  We are at a point in VR where basic comfort options like that should be included for all users; those who need them and those who don’t.  Regardless, your first playthrough will be quick with minimal interaction depending on the choices you make and the revelation that Phil is, in fact, a jerk and has a lot of problems to fix both internally and externally.  Thankfully, once you unlock a scene you can replay it at your leisure so you can learn from your mistakes and fix them a little faster then having to just play through every day in its entirety.  It’s more complicated then just picking the right solution as some of them won’t be revealed until you have completed the right actions in a scene to get to the next scene only to realize there were more problems to fix then were readily apparent initially.  A tablet you carry around contains all the games options as well as personal notes (ie. thing s you need to correct), contacts and a few more additions. 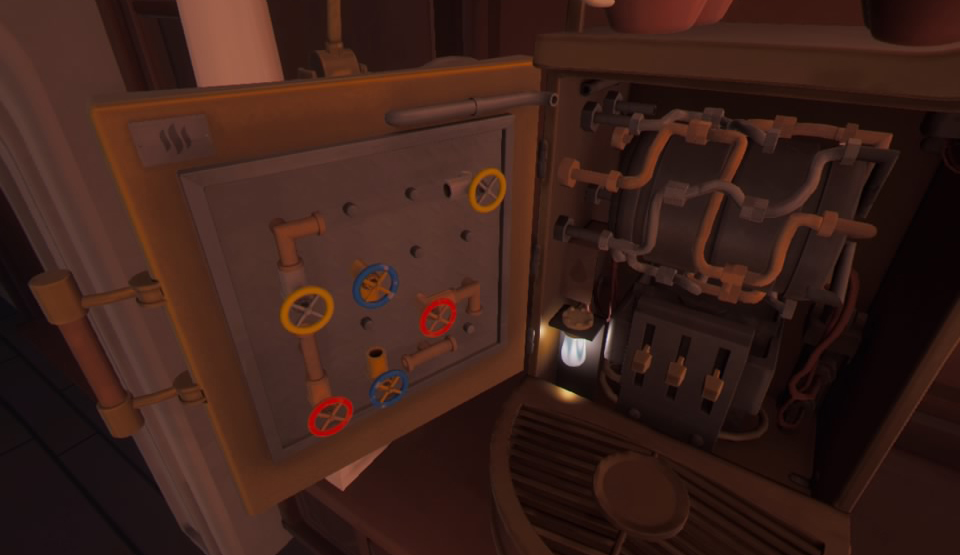 You’ll encounter a few tasks that may trip you up a bit.

Like Father Like Son’s largest misstep would have to be the choice of visual style which is very exaggerated and cartoonish.  It doesn’t look bad, but it doesn’t look great and I can help but feel that the visual stylings here were a knee jerk reaction to the realistic, but very blurry, visuals used in The Invisible Hours.  You’ll meet some characters from the original film and a whole bunch more new ones and even though I wasn’t the biggest fan of the art style, it was easy to move past it and focus on the game.  You’ll initially only visit 3 or 4 locations on your 1st go but as you play and fix things, a few more locales become available adding more problems and more solutions.  You’ll find yourself in the house, a coffee shop, a ceremony and a few others with each full day playthrough ending in a memory shedding a little light on how Phil became the man he is today.  Conversation options pop up as bubbles you can grab and as you play multiple times, more options pop up.  You’ll receive calls on your phone, which is also fully navigable as tablet and despite the visuals, a lot of effort has gone into making this a very immersive title when it comes to how you interact with the world around you.

The star of the show has to be the dialogue as every single line of dialogue in here is fully voiced by a very competent cast.  Phil constantly talks to himself, often whining about his predicament at the games onset but as you fix the world around him, you begin to see his more endearing side.  A ton of dialogue has been recorded for the multiple playthroughs and it’s very entertaining to see how characters reactions change based upon what you did differently before you met up with them.  It should be noted that this does contain some adult language which definitely makes some of the conversations feel a little more authentic. 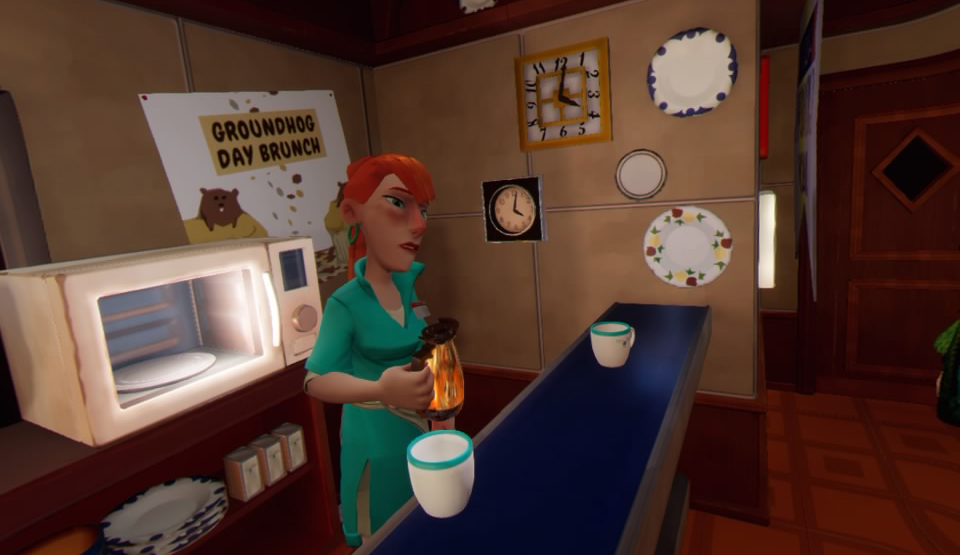 I really like this game, let me just say that now before I bring up a few other issues, which are in the grand scheme very inconsequential to myself, but I think others may take a little more offence to them then I did.  The largest one I can think of is the forced repetition, which there is no way around.  The game is designed for you to repeat the same day over and over until you get it right and even though you’ll be fixing things and changing interactions, to get through the whole day correctly may require 1 or 2…or 3 or 4 more replays then you intended.  This is somewhat negated by the fact that once you do everything in a scene the right way, you never have to go back to it though to do this, you need play through and complete them in chronological order or you just won’t be able to make the right choices on the subsequent scenes.  As much as failing a scene infuriated me at times, it’s kind of meta as this would be exactly how I would react if I were actually in this Butterfly Effect sim and those same frustrations pushed me to do it right the next time, and when I did so it was very satisfying.  Secondly would be that some interactions are just blocked until you find the right narrative path, even though you know that you’ll have to fix them in the future.  It makes sense to the story as Phil really wouldn’t care to fix them at that point, but its still a little annoying.  Lastly would that a few scenarios and mini games (specifically the coffee ground and dance games) go on a too long, made worse by the fact you may have to repeat some of them more then a few times.  My last tiny issue would be that if characters are too far away from you but still speaking, their mouths don’t move which was a little weird looking. 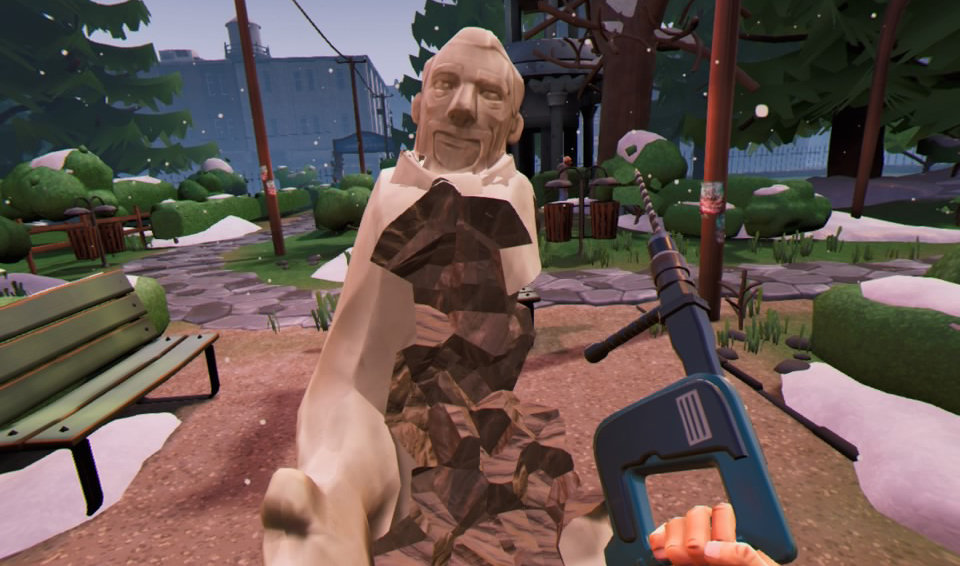 Pretty sure I nailed it!

I am addicted to this game and even appreciate some the issues I mentioned as it makes so much sense within the context of this repeating universe that Phil (ie you) would get frustrated at times and while the narrative may seem shallow upon your initial play, subsequent plays constantly add more depth and scenarios you have to solve.  Given my first 2 days in Punxsutawney, I figured the game may be a little on the shorter side but trust me when I say this has some legs and will take you at the very least 6 hours to get through and I think for most of us, it will take longer than that.   Like Father Like Son is a fantastic translation of the original movie and uses new and old VR tropes to make something that feels original.  Phil and the characters around you feel very authentic and as you learn more about them, you can’t help but start to care and enjoy Phil’s Journey.

What would I pay? This is $30US and totally worth it.  The amount of choices, game paths and dialogue in here is impressive and had me truly feeling like a man stuck in a time loop.  Even when the game frustrated me, Phil’s frustrations echoed my own making the entire experience feel very immersive…despite the aggressive comfort options.

MWM Interactive provided The VR Grid with a press code for this title and, regardless of this review, we thank them for that!