So, this is a weird review as this game has been out for 3 years and has seen numerous updates and improvements since it’s initial, let’s call it shaky, non-VR launch.  I remember being a little excited for what it was bringing to the gaming table, but the promises about the games content seemed just a little to lofty to be true and as it turned out, I was apparently right, and dismissed the game as something that I just wouldn’t be interested in and focused on other titles.  With the announcement of VR support, No Man’s Sky was back on my radar and with it’s VR release I give you my early review/impressions of the game with a focus on the VR presentation and mechanics.  At the time of this review, I’ve logged in roughly 10 hours in the game, 5 in VR and 5 out. 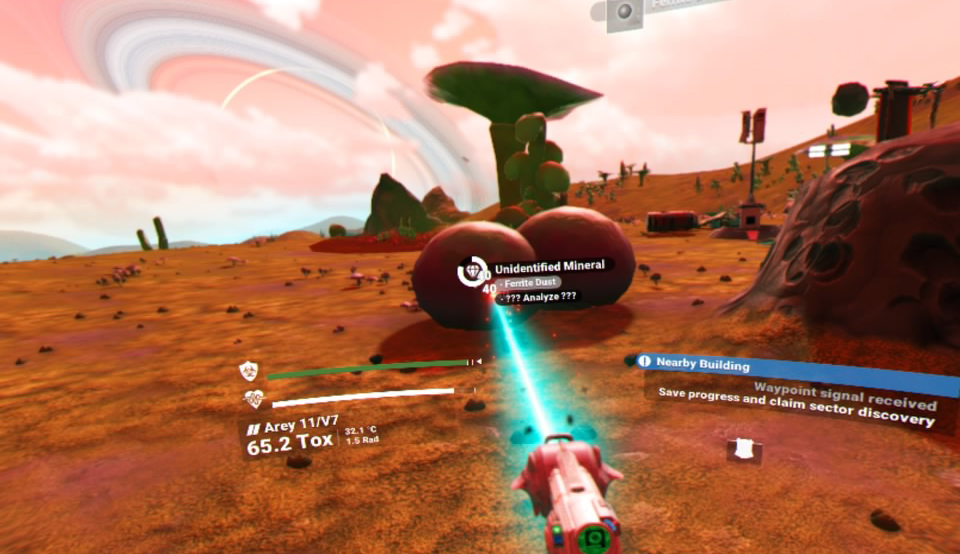 You are going using this tool…a lot!

The controls in VR have been overhauled thanks to the wonderful decision to make this 1st-person while in the headset.  DS4 or Moves are supported with each playing substantially differently thanks to the differing button placements.  The DS4 is tracked, allowing you to aim your gun way better then the flat version with most of the other actions (interaction with items, menu navigation and so on) assigned to button presses and you navigate the menus the same as out of VR by using a thumbstick as a mouse cursor.  It works just fine but to fully immerse yourself in this universe, Move controllers are the way to go offering levels of immersion we should be expecting out of non-VR ports.  With the Moves you now how the freedom of 2 hands allowing for even more comfortable weapon aiming with menus being relegated to holograms on the back of your hands that pop up when you bring the opposing hand near them.  The larger, main crafting menu is still present and now navigated by aiming your Move controller at whatever icon you want to select, and is a little cumbersome at 1st thanks to the in-your-face way it’s displayed but it didn’t take me too long before I was naturally moving through them. Grabbing your weapons requires you to reach over your shoulder which I thought was a nice touch while scanning now needs you to bring your left hand to your head making me feel a little more like the futuristic cosmonaut I’m supposed to be. Other VR only interactions, like raising your cockpit screen to exit the ship add to that immersion factor, though some tasks, like harvesting plants, are still performed by holding down a button, though now you need to give the moves a little yank, as if you were pulling them out of the ground.  Flight is tricky with the Moves though thankfully you can switch on the fly between control methods allowing for an easier time in the cockpit. Comfort options are available for any control method ranging from teleportation and click-turning to full locomotion with blinders also optional. 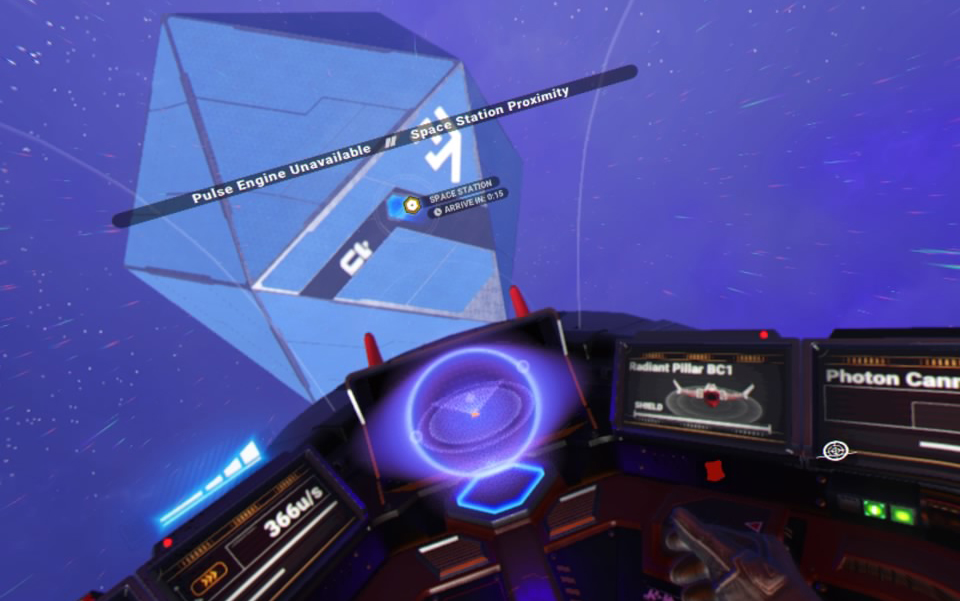 Flying through space is exhilarating!

The most divisive point for the PSVR version of No Man’s Sky is going to be the visuals which take a large, and expected, hit while in the headset. What was once crisp and clear on the TV sets is now washed out, at least at distance more then 12 or so feet away from you.  Everything close still carries that same level of detail we have come to expect from the game, and this is especially true when you are in any vehicle or traveling through cave systems as the visuals really do get a chance to shine in these moments.  The near endless draw distance is still, thankfully, in VR so while distant objects lack a lot of detail, seeing to the horizon and planning your next route is just as easy as it ever was.  In fact, that massive scale is even more impressive in VR now that you are in the game.  Going from a 3rd person TV screen to a 1st-person VR experience is still an unparalleled feeling.  Creating your bases(s), flying across the planet side, discovering all manor of alien life form, taking to space, jumping to warp speed and just about every other “cool” thing you do in the game is amplified by being in the headset.  Between the Pro console or the original PS4, the visuals are almost identical so I would expect improvements on the pro side of things and suspect visual improvements given the developers love for VR and passion to constantly improve their game.

Sound design is on the level of any AAA title save for the large amounts of reading you’ll be doing as you interact witch creatures and any kind of communication terminal.  Those moments appear in silent text only but given just how expansive and near endless the game is, it makes perfect sense why this route was taken.  Beyond that, all the environmental effects or on point with your onboard suit computer notifying you of hazards you come across.  All the creature you encounter make different noises and while music only peppers this game, the ambience in each area, no matter where you are, only immerses you further in this universe. 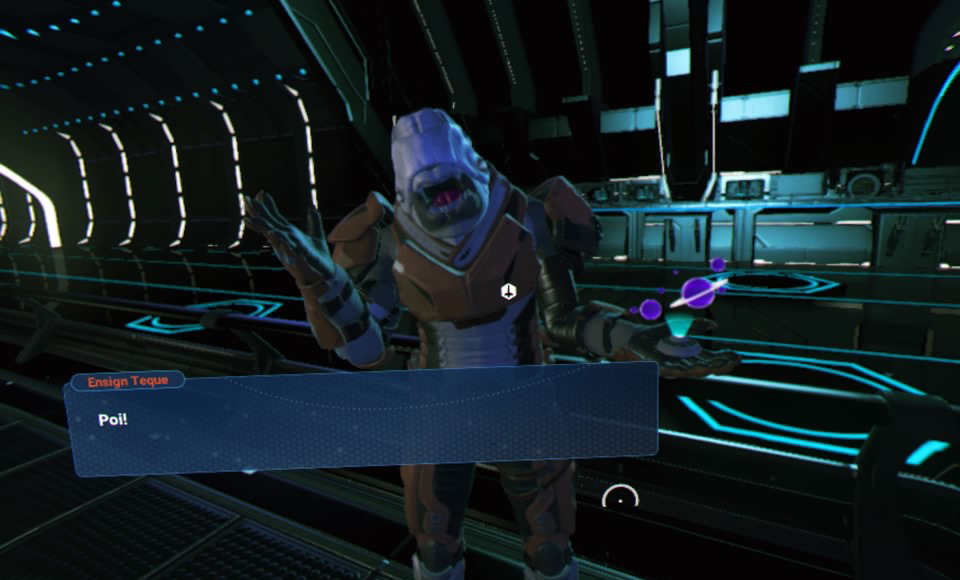 Just one of the many sentient beings you’ll discover.

I am really digging my time in No Man’s Sky but I can’t help but feel like some will be let down by just how demanding of your patience and time this game can be.  No Man’s Sky contains a not so subtle, constant grind that has the potential to take over your gaming life.  You have, or discover, the tools necessary to create anything in the game from simple steel plating to huge giant bases full of all of types of machines, and hireable beings, that all require resources or components to create.  Your ship requires fuel and said fuel needs to be created from elements you mine.  A different resource is needed for Warp travel and the same goes for all your machines, guns and even your space suit, which can only take so much environmental damage without needing a reprieve from the elements or repaired.  The point I’m making here is that large portions of this game need you to mine and craft resources to fabricate some things to make other things to upgrade or make other things.  With that said, accomplishing said goals typically unlocks your big next step and gives a sense of satisfaction like few games do.  No Man’s Sky is you vs. the Universe and to survive and even thrive is a very rewarding accomplishment unto itself.  There are major and minor quest lines to follow as well as other modes that include multiplayer play and a creative mode where you can experiment with any items in the game and just mess around.  The PlayStation VR version is currently limited to 4 players in the Nexus which also at this time can be incredibly glitchy often times causing game crashes, though Hello Games has historically fixed these types of issues quite quickly.  Playing with friends is a delight though truthfully, at the time of this review, I’ve been riding solo and exploring the galaxy at my leisure. 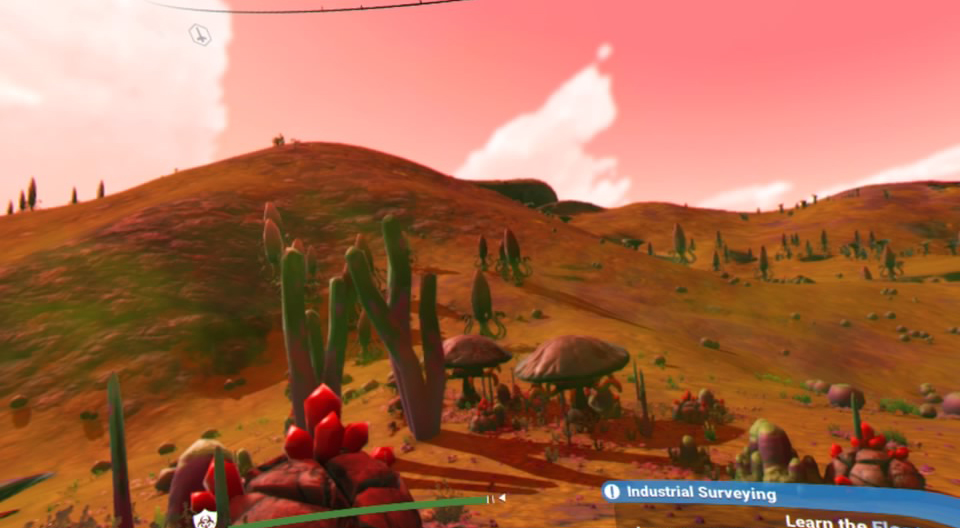 Every planet you visit will have an different, often hostile, environment.

No Man’s Sky will forever hold a place in gaming history as one the most impressive comeback stories ever.  Hello Games has never given up on this game and has shown their desire to not only deliver what was originally promised all those years ago, but push the game beyond those goals and forward into new territories.  Bringing this to our current gen headsets is a feat that many other games have struggled to do in the past or have outright failed in their VR implementation.  Having yet another huge expansive industry changing game embracing the immersion of virtual reality is, at this stage, a gift we should be thankful for.  By no means is No Man’s Sky in VR perfect, but I’ll be damned if this game isn’t slowly starting to swallow all my gaming time and I’m digging that…and I’ve only scratched the surface of all the content this universe contains.

What would I pay? The full price on this is $50 on the PlayStation store (though is currently half that) and is easily worth it.  The fact this has been out for 3 years means it should be easy to find a cheaper copy somewhere and regardless of what you pay, this has more then enough content and fun to easily justify that purchase.