This review has been updated on March 12, 2018 to reflect changes to the game after leaving early access

In the past half a year since I last reviewed The Wizards, it has not only improved, but it’s developed into a landmark adventure game that sets the standard for any future VR fantasy titles. Since August, nearly every flaw with this previously-mediocre game has been addressed. This game is some of the most fun I’ve ever had in VR, making me feel more like a wizard than anywhere else. Thanks to an immersive environment, intuitive spellcasting system, and high replayability, The Wizards is a breathtaking masterpiece that I will continue playing for months or years to come. Just writing this review, I can’t wait to hop back into the action. 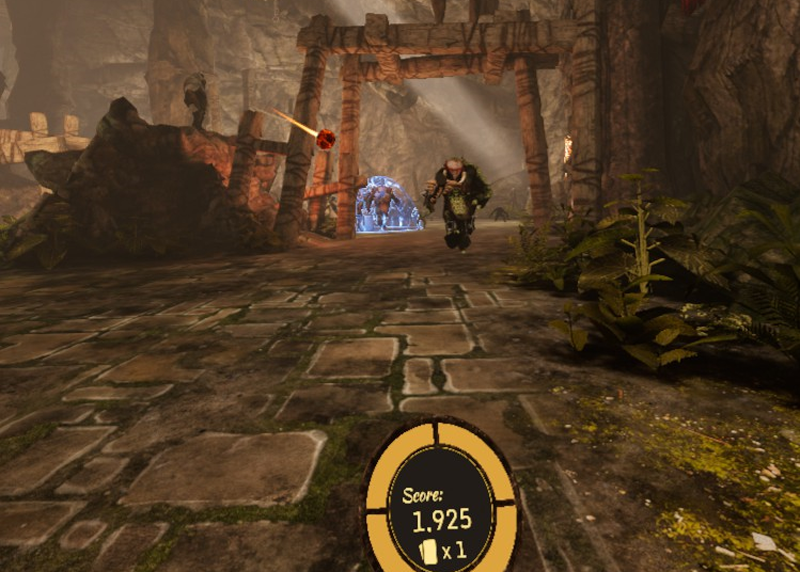 You play as an unnamed wizard apprentice, conjured into existence by the lone surviving wizard of a great war between humanity and orcs. Also serving as the game’s narrator, he sends you back in time through an interdimensional rift to prevent orcs from annihilating human civilization and taking over the world. This story isn’t particularly original or inspired, but it’s built well around the game’s setting. The instructor regularly inserts statements into gameplay, giving you advice and describing the current situation. Many of his statements are hilariously clueless, though many other statements redundantly describe the player’s behavior. Still, this character is overall great, with a superb voice actor and a charming personality that helps carry the game’s otherwise-generic story.

The single most fun and innovative aspect of The Wizards is its spellcasting combat system. There are six unique spells you can cast at a whim, each with different applications. Each spell involves waving your hand in a specific manner, but these movements are all easy to remember and practice. Each simple hand movement mainly serves to add physicality to spellcasting, immersing you in a way unlike any “weapon-”switching mechanic I’ve experienced. Use your bow and arrows to pick off a few ogres, before turning around and electrocuting dozens of goblins using a lightning strike. If an orc gets too close, sweep your arms downwards to send a flaming boulder at him. Is an enemy fireball unexpectedly flying towards you? Sweep your hand inwards to conjure a shield, reflecting it back, before tossing it at an enemy like a lethal frisbee. Flee the scene while hurling fireballs at your foes, using long-range teleportation to reach the ideal vantage point. Once you’re at a safe position, try summoning a ring of floating crystal shards that can be individually shot out like missiles, annihilating all enemies in your wake. These spells can all be cast interchangeably, allowing plenty of freedom in physically-active combat. 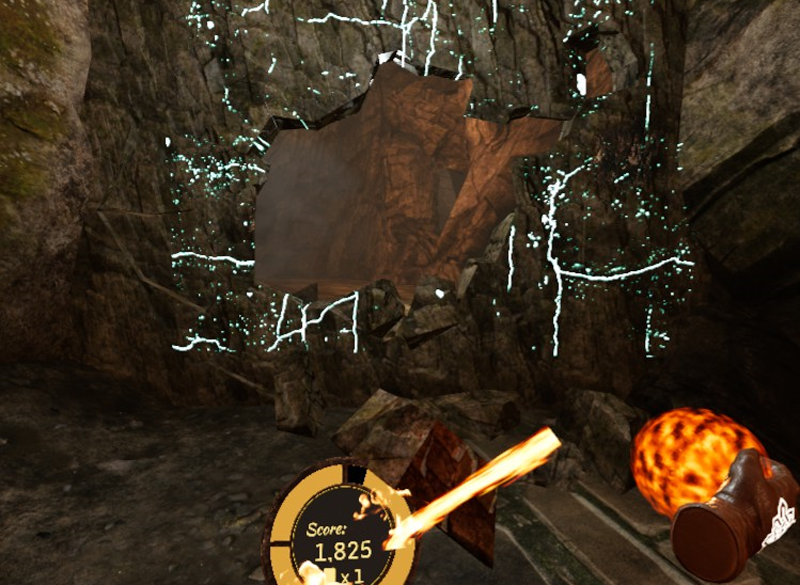 I can never get tired of smashing walls using fireballs

Putting aside the game’s excellent and unique spellcasting, how does its combat in general hold up? Amazingly, for a multitude of reasons. There are a wide variety of enemy types, which attack in challenging and reasonably-sized battles. Sorcerers summon fire blasts at your feet, tiny goblins attack in groups, and massive orcs tower over the battlefield, with many other foes awaiting your hand. Enemies react in believable ways to your attacks, and different spells are ideal for dealing with certain enemies. This is especially true when the game mixes up the challenge using things such as elemental enemies, who are only sensitive to one type of spell. One interesting example is “spell-attractors:” tiny, flying, skittish drones that divert most spells away from enemies until blasted with lightning. The player must always prioritize which spells they should use on certain targets, making combat fast, fluid, and strategic. Throwing physics also work very well, giving slight auto-aim that makes combat feasible, but still challenging. Hurling a fireball across the battlefield and striking an enemy makes you feel like you have superhuman throwing abilities, but still feels skillful and impressive.

The game is extremely tough and unforgiving, yet always feel fun and fair. Dying makes you restart the entire level, and while this can be as frustrating as it sounds, I didn’t mind it. I had so much fun playing The Wizards that when dying, I seldom found myself disappointed, and more often felt excited for a chance to re-experience the whole level. The game also offers mutators, in the form of “cards,” of which two can be selected prior to any given level. These modify the game in significant, difficulty-altering ways, and affect your points accordingly. Even before beating the game, I replayed every level many times in a constant struggle to top my last high score. Between the game’s difficulty, and the card system it offers, The Wizards is an incredibly addicting game. I’m always fighting to top the leaderboards, competing with the impressive high scores of a fairly large player community. 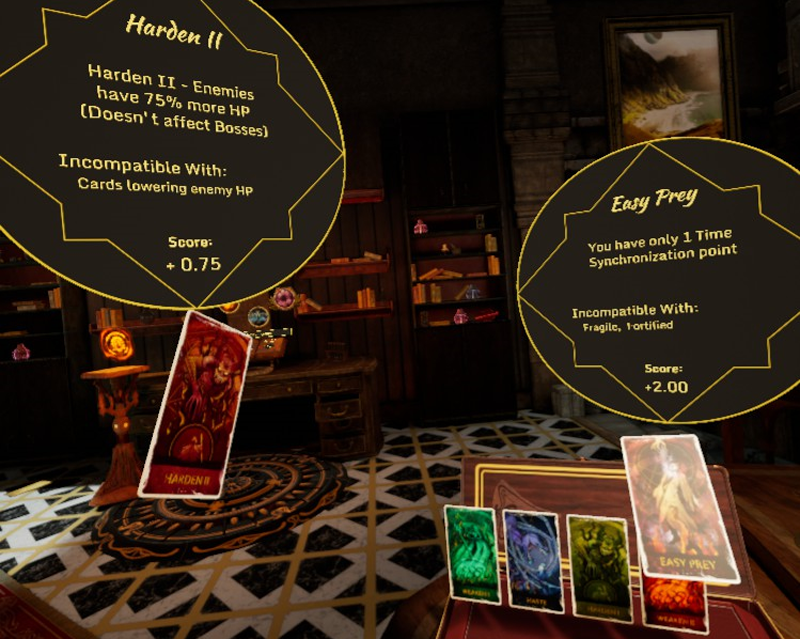 Cards can completely change the way you play

The Wizards boasts an excellent spell upgrade system that allows you to customize your attack strategy. Passing a certain score threshold in a particular level increases your “spell potential,” and when achieving certain tiers of spell potential, the game awards you with upgrade tokens. I usually only saw a new token once every other level, and the chance to upgrade a spell was always exciting. Each spell has two standard upgrades, which alter gameplay in substantial ways, such as the ability to lay traps using your bow or reflect projectiles using your shield. Once a spell is upgraded twice, you unlock its “master challenge:” Pull off an impressive, specific kill maneuver with a spell to unlock its god-mode ability, such as the ability to throw shields at enemies. Just seeing the master challenge objective always felt exciting and pulling it off was even more so.

In the game’s third level, you’re introduced to the “aether.” This supernatural force is manifested as blue light emanating from shrines throughout the desert and gives you ethereal powers when you touch it. This replaces all your spells with the ability to hurl spears, with incredible distance and accuracy. These can be used to kill phantoms, which cannot be harmed using traditional magic. You can rip the aether off your hands at any point, just in case you need to kill standard enemies. If phantoms show up again, you can reuptake the aether at any shrine that you already lit. This unique system gives the player an ability to switch between wizardry or spear-flinging, allowing them even more control over how the gameplay functions. In practice, the aether mechanic works flawlessly, making an already-fun game even more unique and varied. This type of unique gameplay mechanic is symbolic of all the best single player action-adventure games: Whereas Half Life has a gravity gun, and Bioshock has plasmids, The Wizards has the aether. 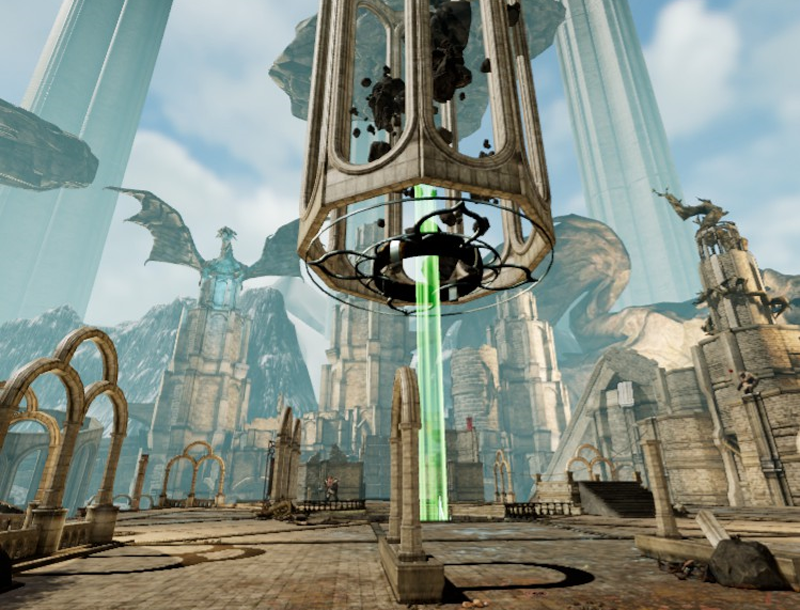 With few exceptions, the environments in the game are absolutely stunning

One of the defining qualities of The Wizards is its excellent environmental design. Each level has a wildly different environment, with large and beautiful landscapes. Although the game is entirely linear, I never got tired of looking at its breathtaking set pieces. Using your teleportation spell, you can hop to specific points in the distance with ease. You can travel between platforms of many different heights, enabling some great multidimensional gameplay. This game has dark, ominous overtones, providing a unique medieval atmosphere all the way through. Graphics are excellent, with photorealistic imagery and many beautiful visuals. Textures are detailed, and lighting has a strong effect on the environment. Overall, The Wizards is an absolute pleasure to look at. Many aspects of the environment are also pleasantly interactive: Pressure plates, door-cranks, and destructible walls are all frequent. The physics in this game are also excellent, and breaking the innumerable wooden crates littering the environment is always satisfying. Behind the breakable walls and sometimes in crates, you’ll find hidden gem shards. Between these, and the mutator cards (which can be found in hidden chests), thoroughly exploring the game’s environment is both enjoyable and rewarding.

Perhaps the biggest improvement seen by The Wizards throughout its development cycle is its content value. Not only has “arena” mode (which is essentially a crystal-defense-driven wave shooter) become its own separate, fully-fleshed-out game mode with unique, replayable value, but the campaign itself has tripled in length. Every level has at least three missions, with huge, frightening, and fun boss sequence at the end of each. Whereas completing The Wizards once took two hours, it now takes 4-5. I found myself fully engaged during this time, and still excited for the many times I’ll replay arena mode. The Wizards delivers all the content you could hope for.

The Wizards also has an excellent user interface, making gameplay and navigation easy. Smooth locomotion works fine, and so does teleportation. When in combat, teleportation is stamina-limited, making both movement options equally viable. Teleportation serves as its own useful spell, letting you reach elevated platforms in the map. It’s an awesome ability that can be relied on by players that suffer from motion sickness, but also benefits gameplay for those who don’t. Therefore, this is among the first VR games I’ve played to strike such a “golden balance” with its movement options. With an excellent physics system present throughout the game, The Wizards also lets you pick up objects and throw them around, though this holds no real gameplay purpose. The level-selection and spell-upgrade tables are present in a home-base map, which overlooks a mountain and is very well-designed. This game was carefully structured in a way that keeps it immersive all the way through. 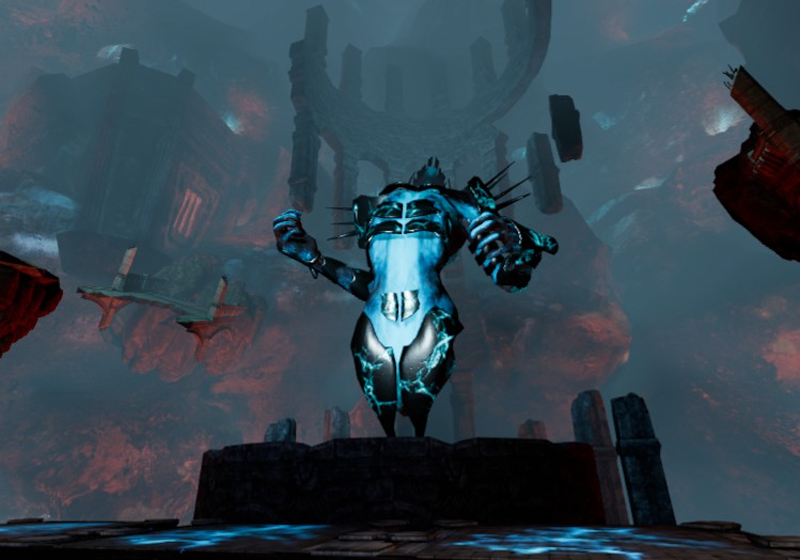 What would I pay for it?  The Wizards is an engaging, immersive action-adventure game that fulfills all your wildest dreams of becoming a badass wizard. This game emerged victorious from a harsh development cycle, slowly shaping itself into a jaw-dropping VR classic that deserves to be cherished for years to come. I would happily pay $30 for The Wizards, and at $20, it’s a steal. For anyone remotely interested in action-fantasy games, The Wizards is an absolute must buy.

Carbon Studio provided theVRgrid with a review copy and, regardless of this review, we thank them for that!