Considering the medium, it’s actually a little crazy how few campaign-based FPS’s we get in VR.  Scraper: First Strike is such a title with you playing as Casey Maxwell, a member of the Human Resistance Force (HRF) tasked with taking down rogue AI led by a robot called Cipher, who plans to turn humanity into slaves, or worse. 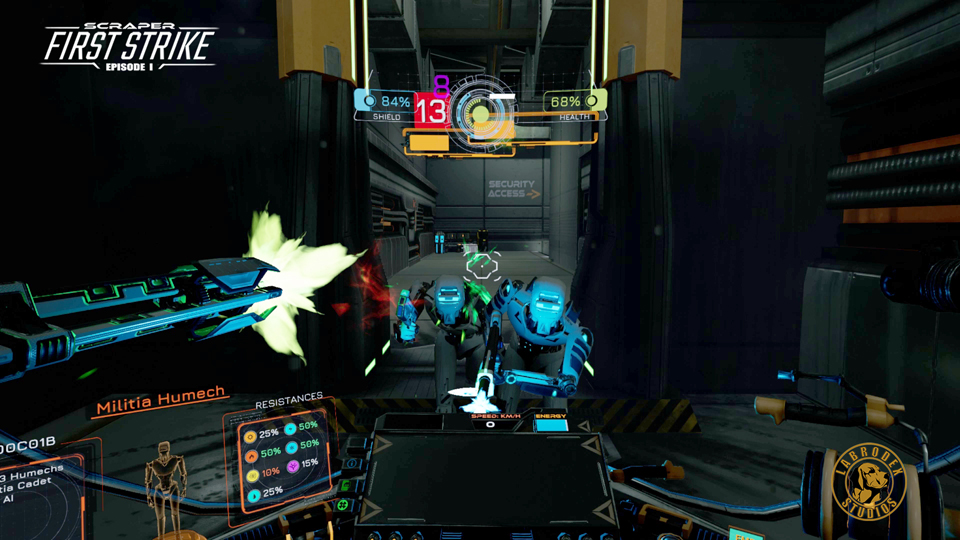 When they get this close, it’s whacking time!!!

On the PC side of things, you are limited to tracked motion controllers as your only control option.   On the PSVR however you can use DS4, Aim and the Moves with any method supporting the 3dRudder.  The DS4 and Aim control almost identical with 1 arm being mapped to the controller and much of your action being mapped to face buttons.  Moves add an extra sense of immersion by giving you both hands to control your hover pod.  There is a plethora of comfort options available here, but for all the controllers available, Moves are the way to go with either the DS4 or Aim controller creating a huge disconnect between you and your in-game arms.  DS4 is serviceable thanks to the thumb sticks and smaller size of the controller, but the Aim is unusable and not for any technical reason, but because your dominant hand, which you can chose at the games onset, is assigned to the aim which makes for an incredibly awkward translation from real world to VR as your in-game hand is mapped to the bulb on the Aim controller.  If you have a 3dRudder, using it in conjunction with the Move controllers is by far the best way to play this game.  Moves work alright on their own though I found navigation to be a tad cumbersome, but with the rudder, my hands were free to shoot foes while my feet handled my controls.  Besides navigation, you can shoot with both arms, equipping a variety of weapons from simple blasters too shotguns, plasma canons, flame throwers and a few more.  These weapons, along with your pod can be modified further thanks to items you collect and purchase during the campaign.  Your pod is equipped with shields, health, an EMP blast, shield booster, a special laser weapon and a melee attack, all of can be upgraded, ensuring you deliver more destruction while taking less damage. 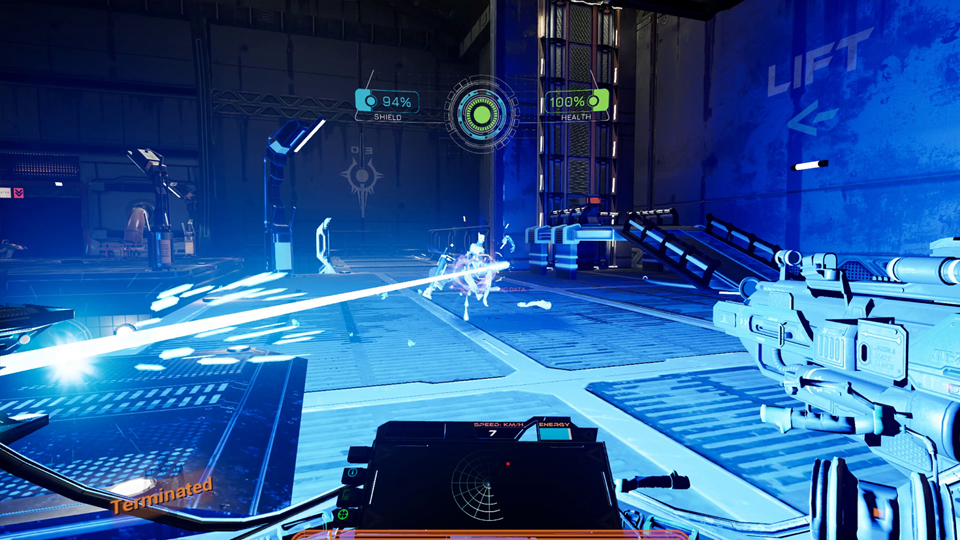 You can choose from a variety of weapons in here!

Scraper looks… alright.  By no means does it push the boundaries of what our headsets are capable of, but it still delivers a solid and consistent experience.  You man a Hover Pod, which is essentially a wheelchair armed to the teeth with a variety of weapons.  You’ll visit multiple floors of a tower taken over by Humechs, humanoid machines that have revolted against their creators who now want to subjugate us and take over the world.  The entirety of the game takes place in a skyscraper and as such, the levels look very consistent with lots of grays and browns being dominantly used, making for an overall drab looking game.  It makes sense as you’ll be visiting factory floors, rectors and other industrial areas, but I still would have liked a little more color splashed in just to mix up the look of the game.  You’ll interact with a few humans who look ok, though you’ll see them repeat the same animations every time you go near them, but you don’t see them too often so that’s a minor quibble.  Most of the enemies you’ll encounter will be seen in the 1st 2 stages and come in a few forms from basic humanoid mechs, to larger models and flying ones like the Security drones and a few others.  Boss battles stand out as being exceptional as the 3 you face are large and in charge coming at you with a variety of attacks and challenge.  You can equip a variety of guns, each with their own shot type with each looking good, though the absence of any dynamic lighting effects hurts the immersion factor substantially and reminds you that you are in an artificial world.

Surprisingly enough, there is a fair amount of voice acting in here and it’s great.  The characters you talk with are all pretty stereotypical, but their performances get the job done.  You’ll talk with them in person, but a bulk of your interactions will be over comms as they help guide you through your separate missions.   The music is fairly stock and repeats throughout the game but never really annoyed me as it falls into the background being pretty much unnoticeable save for when an enemy is near, and the action music kicks in. 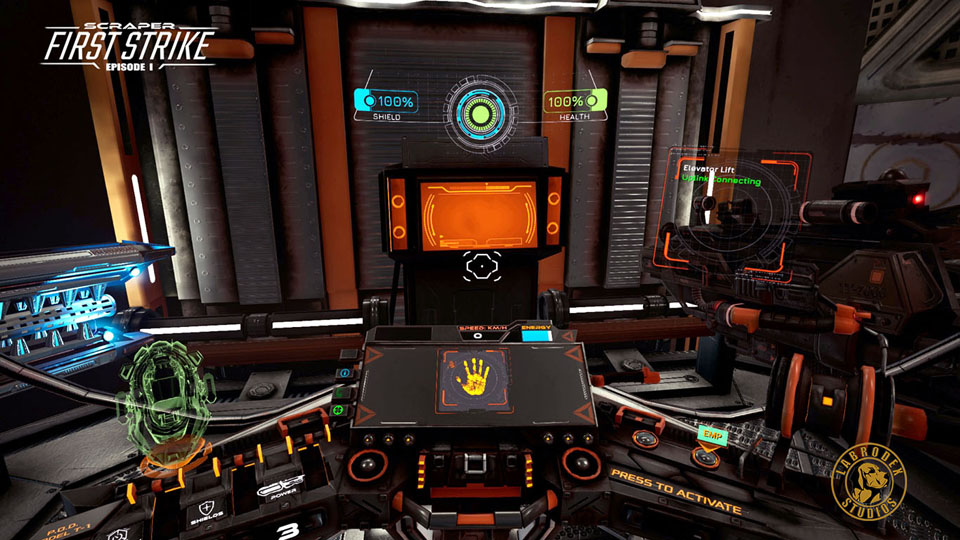 You’ll spend a lot of time seeking these terminals out

I ran into a few issues during my time in Scraper that I need to bring up.  On the first stage, a needed communication never triggered that would allow me to perform one of my missions and without having any idea I was missing something I spent a loooong time wandering around trying to figure out what to do until I turned to YouTube and saw the message I never received, forcing me restart the game and try again.  Enemy encounters also begin to feel repetitious and while new enemies, and the boss fights, mix things up, the general swarm mentality of the AI gets a little old.  That AI is also easily exploitable and can be lured from a fair distance away individually, allowing for you to avoid being overwhelmed.  The modifications in this game are a little confusing as you pick up and can purchase resources and modification plans that can be applied to your weapons and pod.  Making weapons is easy enough, but making and applying mods I found to be a little convoluted as I bounced back and forth between the Engineering station and the vendor, who is a douche,  purchasing needed resources to make the mods to then apply them wherever they can go.  You’ll find mod plans throughout the campaign and there are plenty of options but the process of doing this is more tedious then fun, but the results are rewarding once you figure the system out.  Computers are found on every floor, some needed to push the story along, but others contains schematic plans or written communications from the people who used to work in the tower and while they do flesh out the back story, they also tend to ramble, not offering a lot in the way of narrative and by the end of the game, I found I was just skipping them in favor of the action. 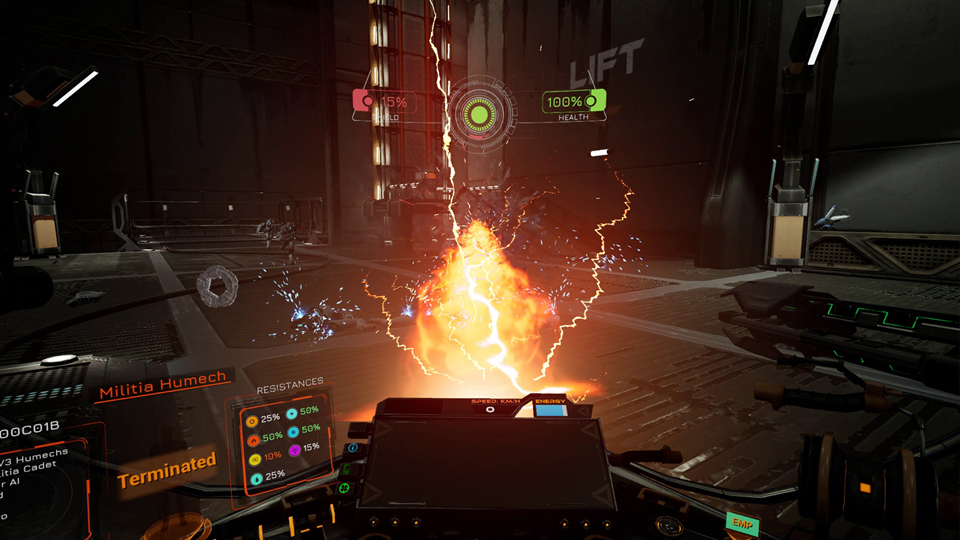 The massive blast delivers a ton of damage…if you don’t miss that is.

Scraper is only 1st part in this on-going story and while the game ends on a very huge ‘To be continued’ moment I was still satisfied with the story told here.  The campaign will take anywhere from 3 to 4 hours depending upon the difficulty you choose.  Despite my issues with the game, I think this is a good start to what will hopefully be a great VR franchise.  If you are in the market for a campaign shooter then Scraper should scratch that itch nicely.

What would I pay?  This is only $20 which is part of the reason why I’m being a little forgiving for this title.  It’s worth that price, but still shows its budget roots.  That said, if you temper your expectations a little, I suspect you’ll enjoy this ride!

Labrodex Studios provided The VR Grid with a press code for this title and, regardless of this review, we thank them for that!