If it’s not clear from the title, Down the Rabbit Hole is a puzzler set in Lewis Caroll’s Wonderland with you playing as a young girl who finds herself falling down the titular rabbit hole.  It’s up to you help her escape back to her home by solving some clever puzzles in this very familiar world. 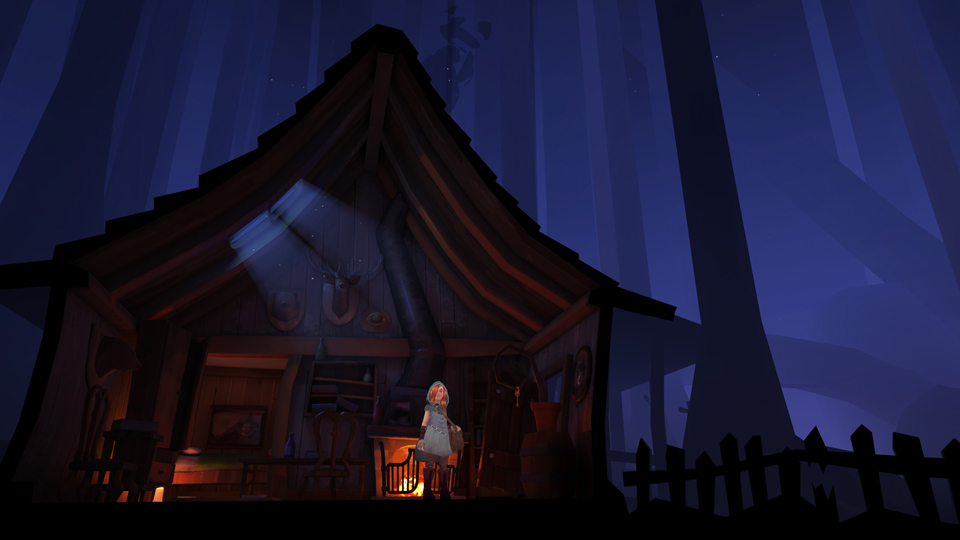 Every journey has a beginning.

You can control the young girl in 3rd person action using the thumb sticks to navigate her through this diorama world.  When she encounters something she can interact with, a button prompt will appear and hitting said button will have her pick up a letter, grab a balloon or any number of singular tasks.  You also have your own presence in this world with 2 orbs marking each controllers position in the game.  The stages are cleverly designed so that you are at the center of the rabbit hole with each of the rooms being in front of and thus around you.  You can grab vines with your hands to move the environment around, bringing it closer or further away or just twisting your hands to get a slightly different vantage point.  In front of treasure chests or when in conversation, you are placed in 1st person view and can manipulate the locks on those chests or just enjoy a chat while taking in the now up-close surroundings.  Those conversations offer up a few choice responses and while not a ton will change up if you decide to play through a 2nd time, the extra dialogue choices are nice as are the additional story choices as you choose the girls name, species of her pet and 1 or 2 other choices that make the game feel a little more tailored toward every individual who is playing it.   Besides just navigating through the puzzles is the task of finding all the missing  invitations for the Queen of Heart’s big shindig at the end of the game and they are more important then just for collecting sake as depending upon how many you have when you go to the party determines which of the 3 endings you’ll receive. 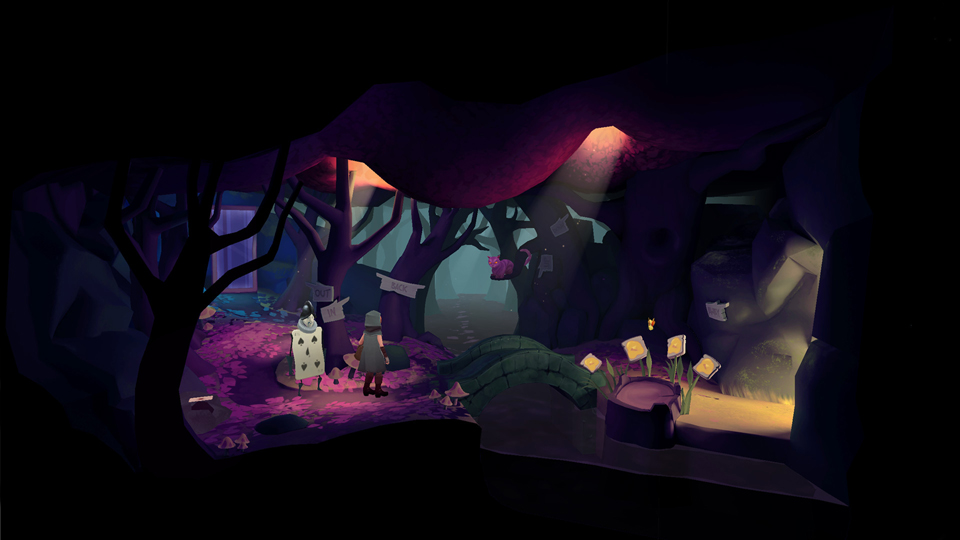 There is plenty of familiar imagery in here.

Those familiar with Alice in Wonderland will be instantly familiar with almost every aspect of the game as it stays not only true to the original stories but also doesn’t stray too far from other portrayals of this series,  especially the Disney version and that’s not a bad thing.  There is still enough originality in here to make it stand out, especially with the way the stages are designed.  The further you progress in the game, the deeper down the rabbit the hole you go with each unlocked stage lighting up so looking upwards reveals where you have been and looking down reveals a few details but those rooms are still bathed in almost complete darkness.  The stages themselves are broken up into a series of rooms ranging in size from a small kitchen to a large garden with each looking small, almost as if it were a diorama with you towering over these small characters.  Almost everything is bright a colorful adding the sense of whimsy this world is famous for with each room/level looking entirely different from the last keeping the game feeling very fresh.  Pulling in for a closer look or being in that 1st person mode reveals a surprising amount of detail on just about everything and while overall the individual stages aren’t overly large, they are rich with life and smaller details that make this a very enjoyable game to look at.

As this is a storybook tale of sorts, your journey is narrated by a soothing male voice with all the characters being fully voiced as well and, once again, sound exactly like you would expect be it the nervous rabbit, sage-like Absolem the caterpillar or the slightly psychotic Queen of Hearts.  The voice work is top-notch and has many light-heated & humorous moments scattered throughout almost every conversation.  Of course, it wouldn’t be a fairy tale without some appropriate music with some melodic tunes playing in the background that perfectly fit in with the game. 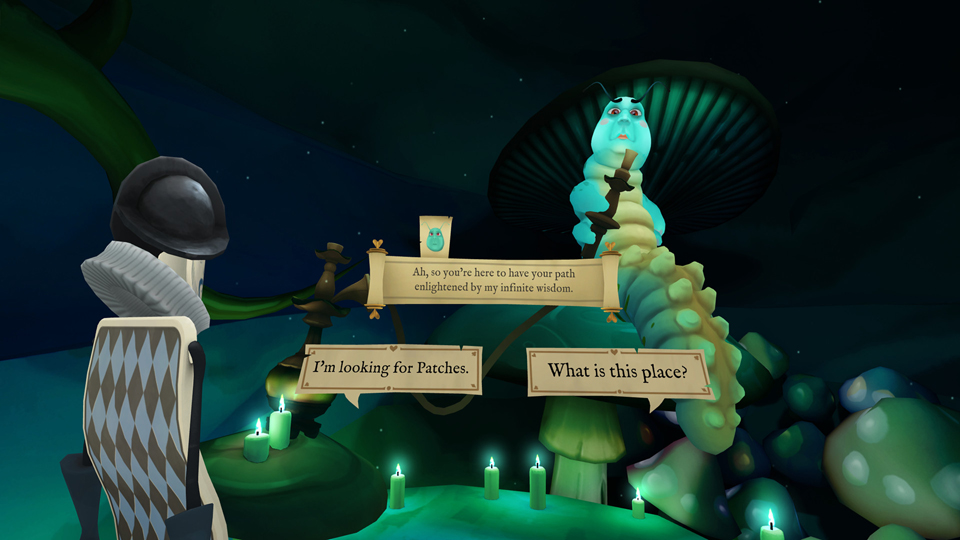 The choices make the story feel a little more like your own.

I honestly didn’t have too many issues with the game as it’s an overall very polished puzzler.  Navigating your view can be a little cumbersome at times as you are forced to grab those handles to adjust your view though you can move the right thumb stick up or down to adjust your height in the game, which I did accidentally hit on more then a few occasions while trying to Move the girl around.  One of the 1st puzzles involving the time on a clock I found a little confusing as the answer didn’t quite make sense in my mind.  Beyond that I found almost all the puzzles to be fairly straightforward with solutions being obvious save for those treasure chests which are marked with clues for the answer to the combination lock, but I couldn’t really figure them out that way and just ended up trying random combos until I opened them.  The real challenge comes from finding all the invitations and as I write this, I’m still missing several of them.  I collected enough to get the mediocre ending but finding those last few is proving to be quite a challenge, even with the game letting me know which stages still have invitations to find.  Once you beat the game you can reload it before you head to the game ending party and search for those missing invitations so depending upon who you are, if you are curious about all 3 endings, you may want to ignore those invitations on your first go just to see all your end game options. 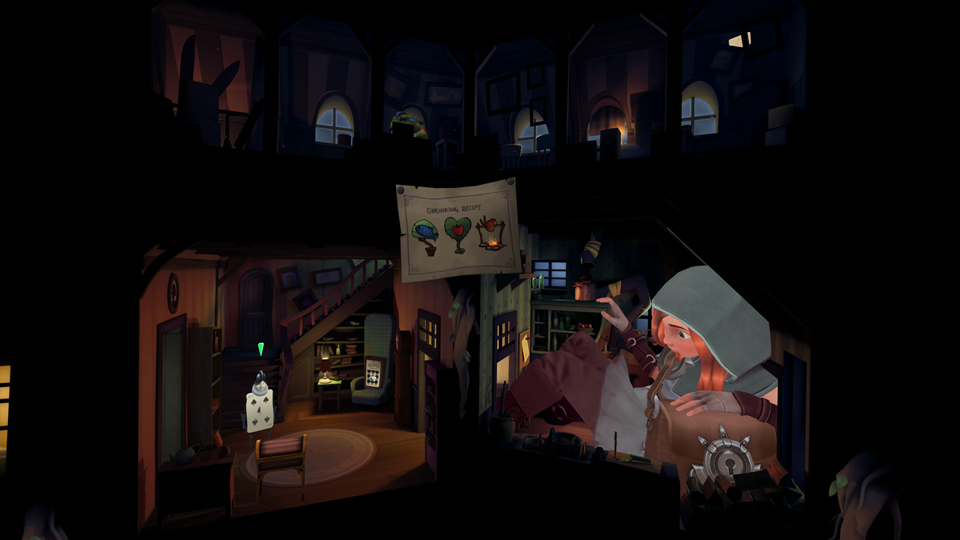 You’ll have to switch to an ally for a few sections during the campaign.

Down the Rabbit Hole offers a nice little puzzler that’s loaded with charm, polish and some challenge.  Despite the way the levels are broken up, the world still feels complete and revisiting this world and these characters, even in a new IP, is great fun.  Depending upon how good you are this will take you at least an hour and half to get through though I suspect it will take most people much longer if they intend on finding all the invitations for the ‘Good’ ending.  Either way, it’s nice little romp in Wonderland that just about anyone can pick up and play.

What would I pay? As much as I enjoyed this game, I do think the $20 US asking price is a tad high given the content in here and I think $15 is a little more appropriate.  That said, If you’re looking for a puzzler in the vein of Ghost Giant or The Curious Tale of the Stolen Pets then I think you’ll enjoy this, plus it does it have a little replay value.

Cortopia Studios provided The VR Grid with a press code for this title and, regardless of this review, we thank them for that!