Surgeon Simulator is a ridiculously popular indie game release on PC 3 years ago(ish) and had you fumble with controls by using a mouse to perform intricate motions in the Operating Room.  The controls than were a struggle but still fun once you figured out how they worked and the game was joy to play.  With the most recent patch what we get is a worthy transition into VR. 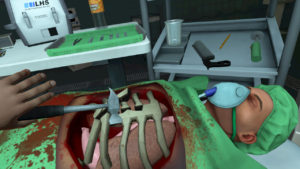 Just hammering out the ribs is awkward and uncomfortable

This title does support DS4 controller but with move support, I thought to myself this is going to be a blast.  I was never a giant fan of the first game as I did have my issues with the controls there as well so I didn’t go into this with any predisposed hopes.  Calibration right away was a tell-tale sign of things to come, requiring me to find that “perfect” standing position where my hands could reach the cart in front of me, similar to Arkham VR, a little fumbling with the camera and you will find that sweet spot where you can reach everything.

The unforgiving collision detection has been replaced to a much more user friendly and fair control scheme.  While I did still struggle with picking up some objects, a little trial and error should have you figuring out the best way to interact with everything around you. The improved collision detection now allows you to utilize all the tools at your disposal, dramatically increasing the fun by increasing your options.  All the tools here are now usable, but I still suspect that once you find your faves, you’ll stick with ’em.

The visuals don’t stand out as anything amazing, but what is here works.  The main menu screen is a desk with a screen displaying the controls, a chart with the current level loaded up and a bunch of objects you can manipulate and move around and I guess practice before you actually play a level.  From the actual organs you are removing to the tools you are using; everything doesn’t have a tonne of detail but it looks polished because of this.  It’s a clean looking game though some graphical hiccups like blood splatter or collision glitches ruin the immersion slightly.  I did have problems with the camera shaking on me quite violently on a few occasions, which did not show up in my game feed.  It was a very jarring effect and I couldn’t account for why it happened but until it stopped shaking(a second or two) it was unplayable

The audio as well is fine with the effects being extra juicy considering the actions you are performing on the soon to be dead(you’re gonna kill em’, trust me).  Everything you touch or drop makes a corresponding sound, so that works.  Unless I’m crazy it seemed like there was only one audio track that played during the surgery levels.  A slightly intense background song that wore out its welcome fast.  One two more tracks would have been a nice addition but overall the audio fits perfectly and does its job.

Surgeon Simulator has been about balancing imprecise controls for tasks requiring precise movements.  As such, even though it may be by design, you will struggle with the controls.  Figuring out what to cut and how to cut it the core of this game but still may turn off people expecting more precise controls.  This is designed to be physically troublesome, but thanks to new update it is definitely playable.  With a few levels to choose from and a corresponding grade when you complete a surgery there is some replayability, though only to beat previous records.  It’s a fun little time waster and your enjoyment of this game will ultimately come down to how much you like trial and error mechanics.  Like I said, the controls now work like they should, the issue is simply that the controls are designed not to work like they should(you follow?) 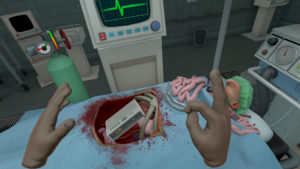 There is a lot of freedom here, but you’ll be hard pressed to enjoy it.

The recent patch has fixed the fundamentals of how you interact with everything around you, but what is left is a challenging game that may still push you to the brink of sanity as you fumble with surgical tools and precise cuts, all without precise controls.  That scheme is by design and “fixed” or not, this still may not be a game for everyone.

What would I pay?   $15US.  The content available on your 1st run through will probably take 2 hours or less.  The replayability here lies mostly in beating your best time so this may be more of a one and done experience.  The later levels add some nice twists to gameplay though and are definitely worth playing