So, in all honesty I am not too familiar with the Final Fantasy franchise or rather, I’m not really a fan.  As a child, I hated the turn based combat and that disdain has carried over to my adulthood.  When FF7 came out and everyone and their dog was playing it, I still didn’t get the what the hype was about and I never bothered with that title until years after its initial release and I was entertained…until I was forced to grind due to the game not letting me progress in the story until I levelled up…I promptly lost interest.  Bottom line is I have next to no familiarity with Final Fantasy XI so there won’t be any fanboyism (it’s a word!) in this one! 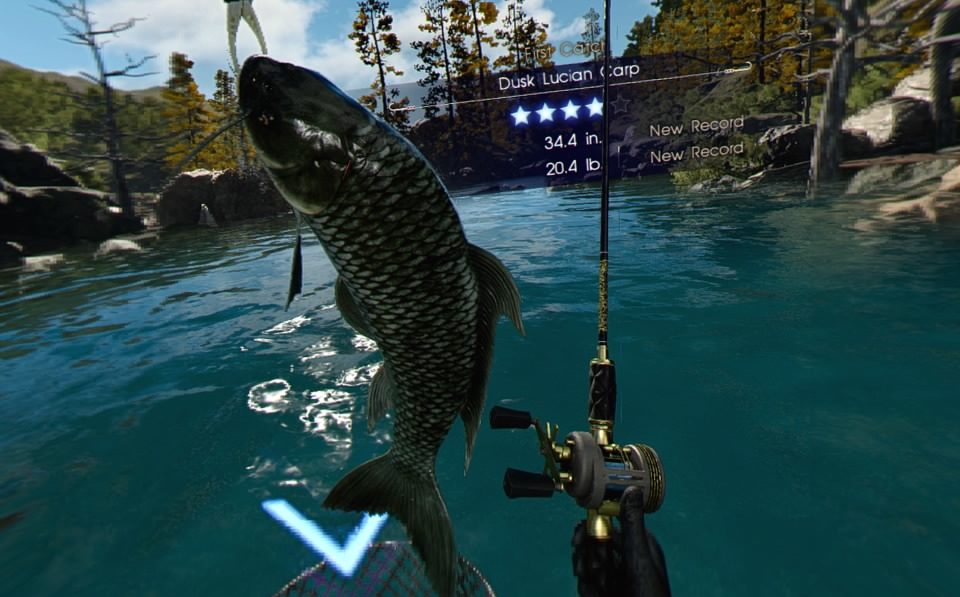 The make or break for any fishing game is the control scheme and in this regard, ‘Monsters of the Deep’ excels and annoys.  Using 2 move controllers the fishing plays out like it should.  Your right hand holds the rod and uses the trigger and Move Button to cast your line.  When you catch a fish, you need to reel in with your left hand, by grabbing the reel and making a circular motion.  This feels great in VR, and emulates the real thing nicely.  As you pull a fish close you’ll have to pull left or right to keep the fish snagged or risk losing it.  To find out where the larger groups of fish are, you have a sonar blast device that highlights the areas you need to aim for.  This plays exactly how I think a fishing game should play and I was happy with these mechanics.  DS4 support is also here, but lacks that same immersion factor as your hands become locked in front of you, as if you are handcuffed, and casting and reeling is performed by rotating a joystick.  In truth, casting was way easier in this mode for some reason, but I would constantly lose fish when I was required to pull left or right and went back to the Move controls quickly.

It’s not just fishing here and included in this Xtreme(ish) sport game is some navigation and interactive areas…nothing insane, but they do add some depth to this game, and considering it’s mostly fishing, I appreciated that.  A cabin is your base of operations and you can teleport and click-turn around and find a few collectables.  In here you can choose your next mission by getting into a parked car and selecting from a few level options, unlocked through the course of the 3-hour(ish) campaign.  You can grab a few items in this area and while none of them really matter, I appreciated the extra bit of interaction.  The lack of full locomotion is annoying but the areas where you can ‘walk’ around are small so it doesn’t really matter much anyways. 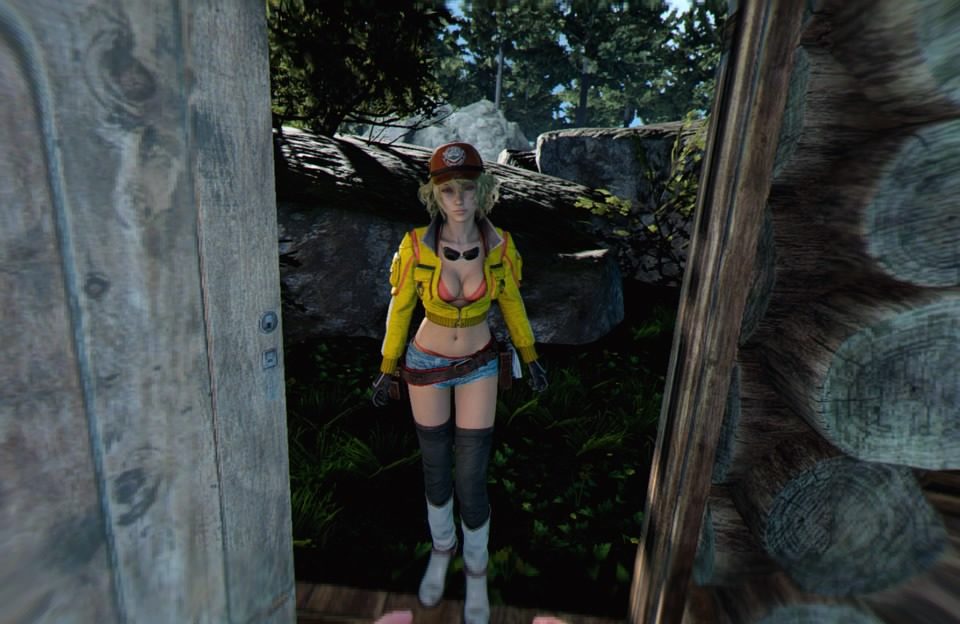 I know ‘fantasy’ is in the title of the game, but this is so over the top it’s ridiculous. That said the character models look good!

The opening moments greet you with a character customization screen that gives Skyrim a run for its money and those wishing to make the perfect Final Fantasy character could spend a ton of time here adjusting every single aspect of your guy or gal.  Why do you care what your character looks like in a First-person fishing game?!  Because you’ll see yourself in 3rd person throughout the game in cut scenes and selfies.  Every fish caught gives you the opportunity to take a picture of your big catch or take a picture of yourself whenever you want through an option in the menus.  Levels are rich in detail and given the pseudo-fantasy setting, may look normal except the chocobo nearby or the giant frog beast thing wading in the shallows.  Everything carries a lot of small details, other NPC’s look great and have clearly been transferred with flawless transition from the FFXV game.  This looks better than it needed to with the multiple levels (7 in total) and people you’ll find in the campaign really making me feel like I was in a fantasy fishing world.

The audio is exactly what you would expect from a Square Enix game with characters voiced by competent actors who clearly take their roles seriously.  In between each level, while in the cabin, a radio tells you of the goings-on in the fishing world and other effects sound bang on.  Whenever you catch a fish, the same track plays every time which got annoying after a few hours of play, but that’s minor. Otherwise you are treated an odd blend of rock, orchestra and more melodic fishing tunes.  One odd note is that the all the speech audio sounds as if it was recorded in a cave, so every conversation you have has an odd echo that just sounds off given your surroundings.  It’s a fishing game so it’s not like it had a tough job in the sound department, but minus that one odd echo choice, it all works! 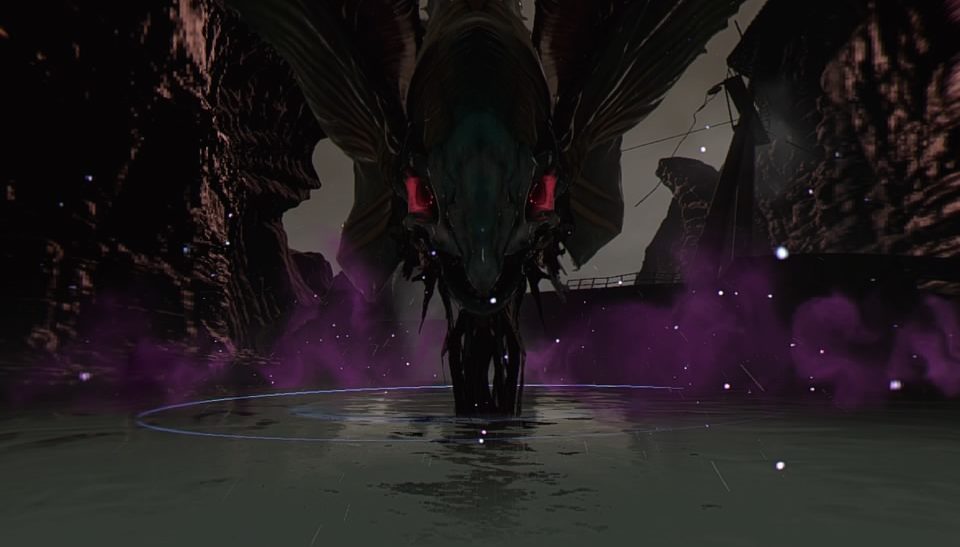 I’ve used this quote before but screw it…’We’re gonna need a bigger boat!’

So as this is Final Fantasy Fishing, it’s not just fish you will be catching.   Each campaign mission has a Daemonfish to lure out and kill. Luring just requires you to catch a certain amount of fish and when your finally attract the beast to your location, that’s when you pull out your trusty crossbow!  Daemons are not fish and try to attack you with a variety of unique abilities.  The first boss just swims at you like and angry crocodile, but a latter one makes false copies of themselves while spitting projectiles toward you.  They all move around the level very fast and careful timing is key to take these baddies out.  Also available is a tournament mode where you can play against AI and human opponents and see who can catch the most fish, measured by weight.  The online portion just records your high score and compares it others in the tournament, with the winner(s) getting some prizes when that tournament ends.  There are new tournaments often so you can come back often and try your hand again and again.  Free mode lets you fish as long as you would like on any of the levels (after you unlock them) and  Hunting mode requires you to catch specific types of fish which rewards with you some bonus Gil(money) and items.

I did have a few issues during my gameplay including some annoying glitches.  On 2 occasions, I lost the visual representation of my Move controllers on the main menu and couldn’t navigate the menus because of this, luckily the DS4 got me back to the game, but it was irritating.  One of the stages turned into an LSD nightmare with the water surface turning into a pixelated mess making it very hard to see the Daemonfish trying to kill me.  I powered through the level, but it was a struggle.  I witnessed a fish flying through the air, clearly not intentional.  Tracking also seemed spotty at times and the sensitivity while casting was also all over the map.  For the most part the fishing mechanics work, but when casting fails you, it’ll drive you nuts.  Another odd choice was visible area where the game renders the games in higher detail.  This is in almost all VR games with top-tier visuals, but the area in question is to noticeable, so whatever is at the top of your field of view looks like it’s been downscaled to 1/4 of the resolution.  Lastly, I had to quit the game to switch from DS4 to Move controllers as even though the game detected that both methods were active, my hands stayed locked in the DS4 position.  I also had the game crash on me after a long hunt when I tried to take a picture of my catch, costing me my progress in that stage. 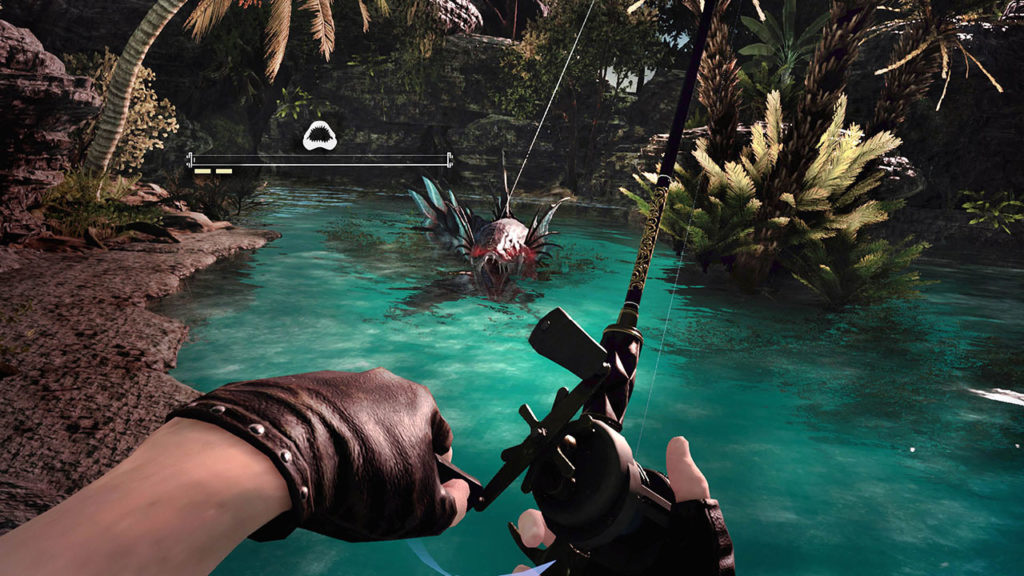 Some of the boos battles get pretty challenging!

None of the issues I mentioned are game breaking and only occurred a handful of times, minus the FOV issue, and I’m typically forgiving of minor glitches and annoyances, but the amount here does affect the game negatively.  With that said, when it works it’s really fun!  So much more work went into the content of the game than I expected and I was impressed with presentation and smaller options available.  While the campaign may be a little short, the other modes make this highly replayable, if not just to find all the collectables and save up that Gil for some upgrades.  As far as fishing goes, I enjoyed my time in this fantastic world and hopefully many of the issues I had are remedied in a future patch!

What would I pay? I think fans of FFXV will take more from this than I did and could probably justify the full price of the game, and they aren’t wrong.  If the game wasn’t plagued with so many issues I’d be fine with that too, but as of right now $20 would be more acceptable to me, $25 if you are really interested in a VR fishing game