The turn-based 1st person fantasy RPG  is something we don’t see much of anymore with it’s heyday being somewhere in the mid to early to  90’s thanks largely to the tech available during that time.  As consoles and PC’s got more powerful, the genre was swallowed up by games showcasing more freedom of movement and faster paced action.  Operencia: The Stolen Sun is a game largely inspired by those Might & Magic titles from yesteryear though opts for more modern day presentation as you play a customizable hero on an epic quest to of course, save the world!  While Operencia was released as a non-VR title, with the recent VR patch I will be focusing exclusively on VR gameplay and presentation. 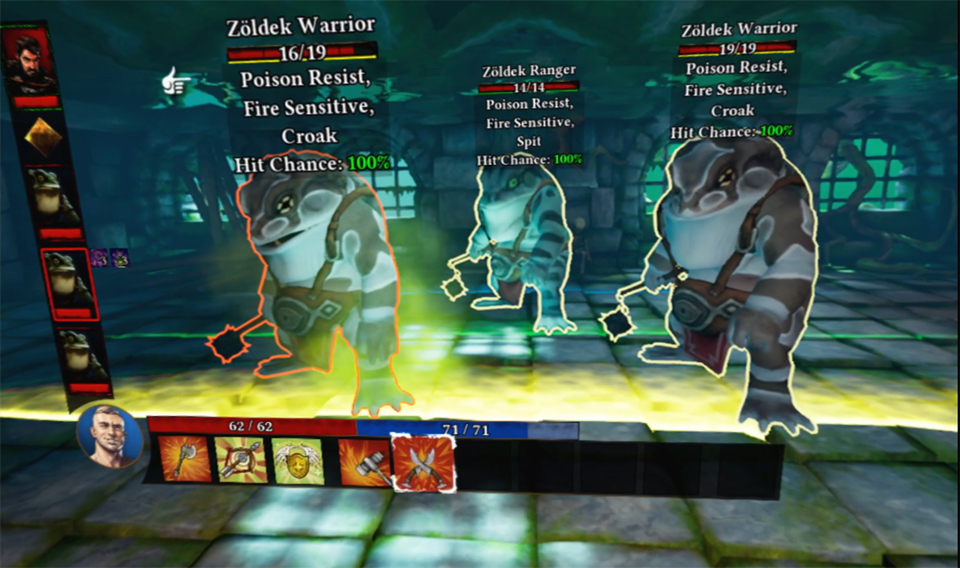 It’s turn based combat in all its glory!!!

So it’s DS4 only on PSVR though standard motion controllers work on the PC side,  with you navigating the environment in typical first-person action save for the fact that map you are playing in is divided into a square grid so you can only travel in 1 of 4 directions.  I think this will be the most divisive feature of the game because at first glance, it looks like you can free roam anywhere, and you can I suppose, but being limited to that grid system takes time to get used to in VR, especially when in more natural outdoor environments.  You can snap turn in 45 degree increments or turn on smooth turning0 but are still locked to the 4 directions of travel so depending on where you are facing, pressing forwards or backwards may have you moving in an unintended direction.  After about an hour or so, and with the help of a live mini-map, I soon became accustomed to the movement scheme though it never felt truly natural in VR.  Beyond that , this plays very much like classic turn-based RPG’s from the 90’s.  You can wander any environment and when you run into an enemy, you are placed in a smaller arena and take turns performing a variety of actions like basic attack, using magic, defending yourself and a few other options typical of the genre.  The enemies stand at you at 3 different distances which affect the effectiveness of your attacks so choosing a melee attack on a neaby foe mis probably a better option while saving your ranged attacks for those further back.   After the prologue, you’ll play as one character throughout the 20 hour(ish) campaign though many colorful characters will join you on your quests, each with their own abilities, strengths and weaknesses.  There is a save system in here that lets you do so at any campfire, where you can also rest your crew and eventually deal with a traveling merchant, or you can save and quit at any time on the normal difficulty with the harder only allowing for these fireside respites from the game. Every encounter will provide you with loot and experience that you can use to upgrade your troupe using a series of menus and skill trees overlayed over the action, which I also found to be cumbersome until I had used them for a few hours.  Items will also be scattered around the environment that may be needed to bypass obstacles nearby, like levers for doors, or may be needed to solve more intricate puzzles requiring you to use or place items found on your journey.  Finally are individual and team elemental upgrades which can be upgraded idividually making for an RPG rife with customization options. 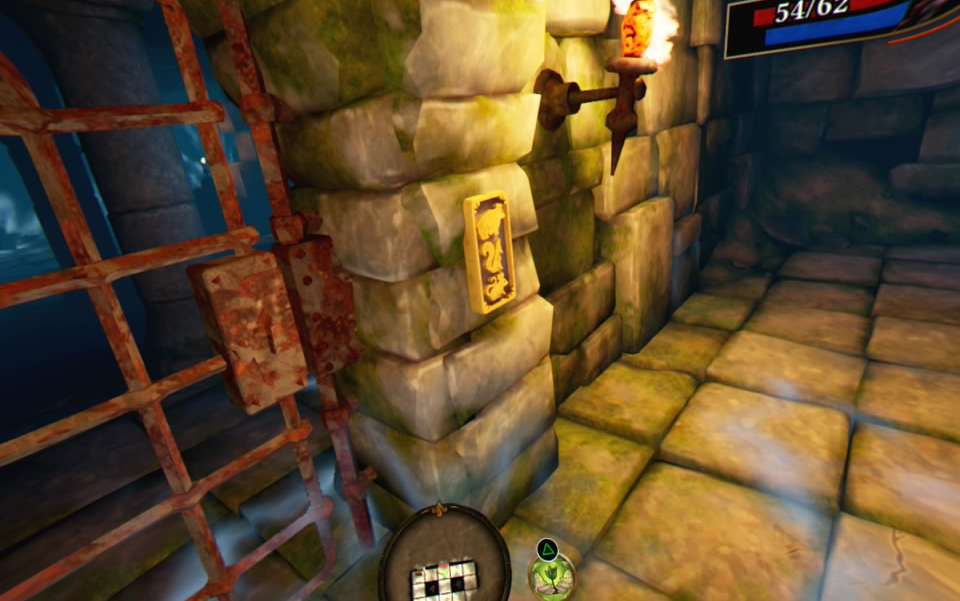 You’ll have to solve some environmental puzzles in here.

Operencia is a mix of classic fantasy tropes and Hungarian mythology making for a mostly familiar title  where you face off against giant spiders, dragons, skeletons, demons and so on, but with the occasional Hungarian oddity thrown into the mix that adds some unique flare.  The game itself looks fairly good though has a slightly fuzzy look on the environments, which is sometimes typical of flat ports to VR, but given just how huge and vast the game is, the only time I really noticed this was in the more open environments,  and with a bulk of the game taking place in smaller dungeons, towers and castles, it really wasn’t too large of an issue.  In fact, their is some light cell-shading type stuff happening in here to help accentuate the edges of the of everything around you.  Enemies move through the environment and are, mostly, wonderfully animated and once you are in a battle, look just as good, attacking you in full animated style.  A definite benefit of VR are these encounters and while it is a little odd to see your foes just standing their, waiting for their turn to attack, larger enemies look very impressive and many enemies utilize “in your face” tactics like energy blasts or swinging massive weapons which looks great in the headset.  Unfortunately, the scale of these enemies isn’t quite optimized for VR and during a couple of the boss battles, their attacks or deaths would have them clipping into me as they got a little to close though this really only happened on a few occasions.  Speaking of scale, there are moments in VR when things just look off and items appear much larger then they should be.  From a distance, everything looks proper, but get too close to a torch or chest and they suddenly look massive, which hurts the immersion factor a bit.  Conversations take place on a 2D overlay, encompassing your vision with pictures of the characters being highlighted as they speak.  Visual shortcomings aside, their are some fantastic moments in here and the world of Operencia feels fully fleshed out in both locales and mythos. 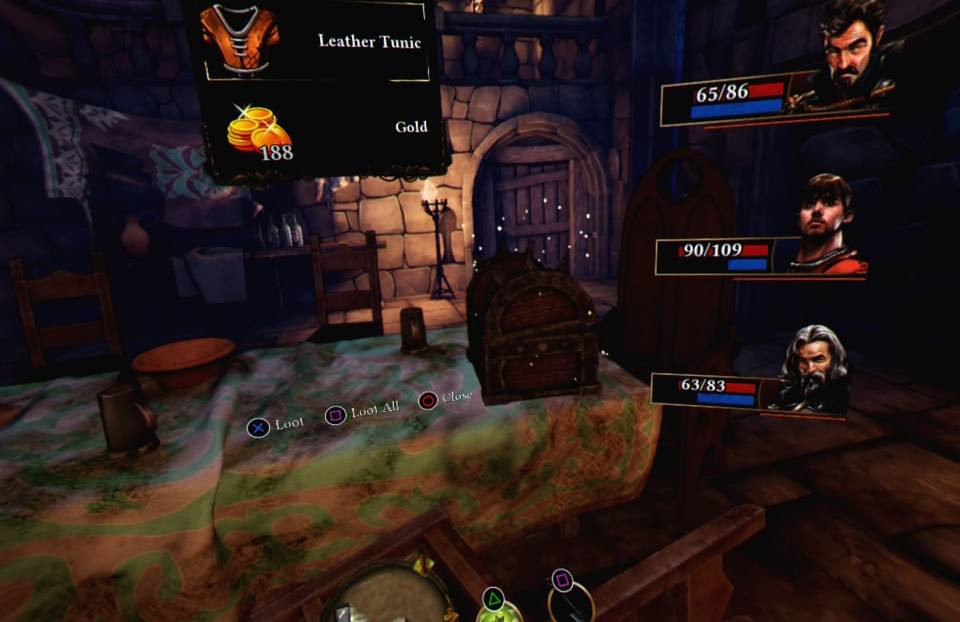 Audio design is on point with some surprisingly well done 3D audio though when enemies are on a floor above or below you, it can be challenging to determine their location as they sound much closer.  Every single line of dialogue is fully voiced by some great and not so great voice actors though even when the performances and delivery were lacking, I still appreciated that over having to read through all the story, and their is a ton of it.  The initial hour is so rife with conversational interruptions that I was getting a little annoyed at the amount of stoppages in gameplay.  This eased off after the prologue but their are still many moments where you are staring at 2 characters pictures while lines of text appear at the bottom of your vision along with the voiced dialogue.  A lot of the script here fleshes out the characters and provides back story to your current plight as well the world as whole and is appreciated and I recommend listening to everything everyone has to say as it really adds to the story,  though even I found myself skipping some scenes when I cared little for the topic.  The soundtrack is also on point but disappears into the background more often than not making it more ambient than anything else, but when I noticed it, it fit whatever was happening nicely. 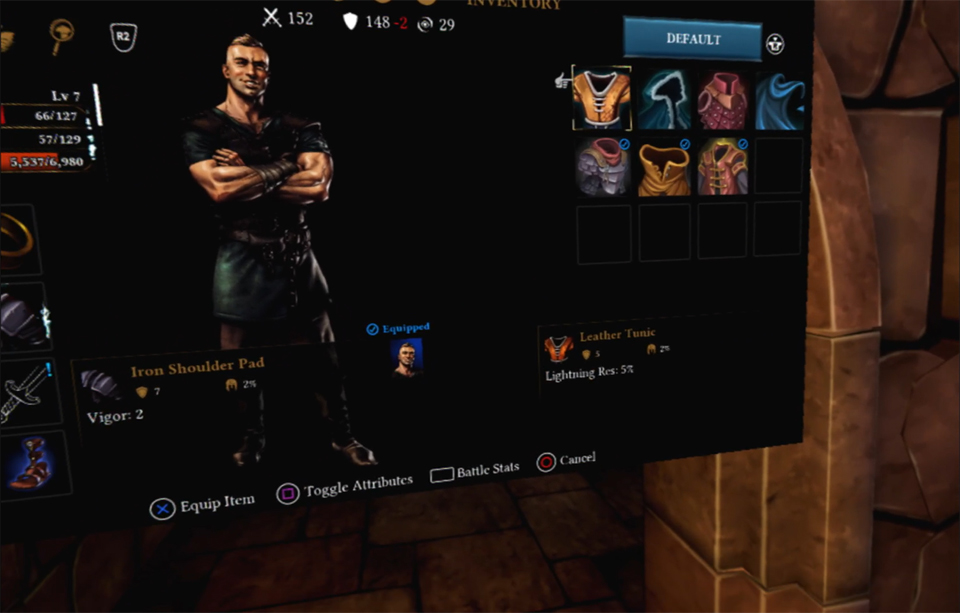 You’ll be spending a lot of time in the menus.

So Operencia really is a true re-imagining of those classic dungeon crawlers from 30 years ago and that includes all the pro’s and con’s of the genre itself and the pro’s and cons of modern day VR.  After a few hours playing on the stock settings, I ended up turning on the in-game grid as I found myself a little to often trying to walk in directions the game just wouldn’t allow.  Another issue worth mentioning is the way you highlight items near you, which is by looking at them.  The problems arise when you get to close to the object and can no longer interact with them, forcing you move back a square and be visually quite far away from said object.  As with many of this games shortcoming, time in the game minimizes them but they never truly go away.  Issues aside,  I quite enjoyed my time in this fantasy world.  Besides movement and combat, their are a host of other mechanics that allow you to look for buried treasure chests, reveal hidden clues in the environment that could aid in bypassing your next obstacle or unlocking a new recipe.  Those recipes, which are challenging logic puzzles, are used to create potions and other permanent and temporary abilities that make traveling through this realm a little easier.  I should mention that this is not an open world game but rather a mostly linear campaign with each of the 13 stages being it’s own beast broken up by cut scenes and loading screens.  After a few hours of game time, you can revisit past stages and unlock areas previously inaccessible thanks to new abilities and items found during the campaign.  The same goes with your party members who initially come and go as the story dictates but become permanent and  swappable options, though as each character needs to be involved in battle to be rewarded experience to level up, most of us I think will stick to a few favorites and ignore the rest.  The level up system is also fairly in-depth with individual upgrades to the character’s stats and abilities as well as the somewhat annoying task of swapping out old gear for better stuff which happens a little to often between the many characters you’ll be balancing and the amount of loot you’ll pick up. 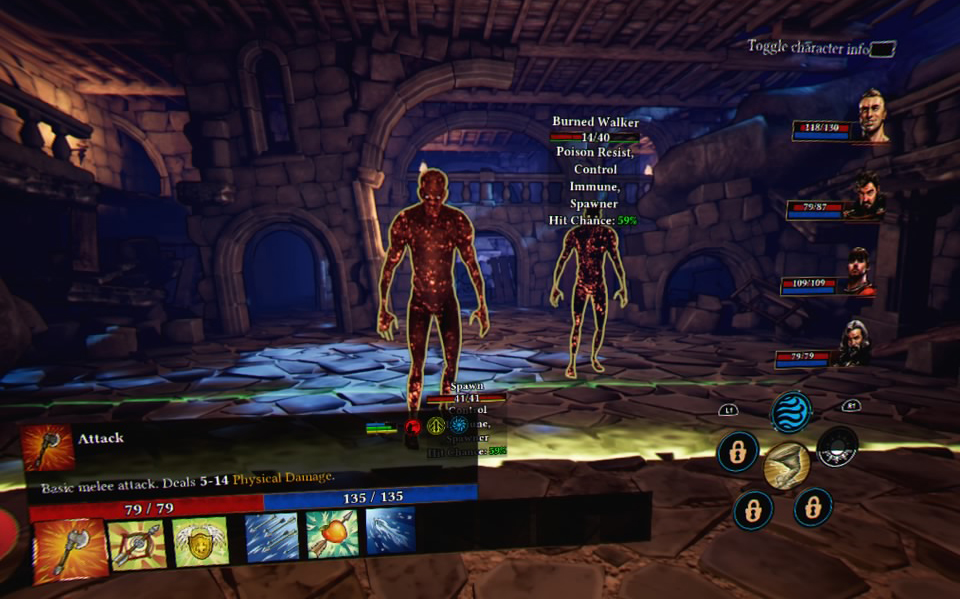 Operencia. when it’s all said and done, I think might be kind of a tough sell for those of us who didn’t grow up on these types of games, which I think is a shame.  There’s a lot to like in here but it’s held back by the genre itself and its implementation in VR, which just doesn’t translate as well as others.  With that said, if you can push past the movement scheme and don’t mind first-person turn based combat than  there is plenty of game to chew through in here with a very lengthy and entertaining campaign, plenty of customization options and loads of classic RPG tropes.

What would I pay? This is $30 US and worth it.  By no means is it perfect and even veterans of the genre will find moments of frustration in here thanks to some slightly imbalanced mechanics and length exposition, but trial and error will get you through the tougher spots and on to what ends up being a very satisfying journey.

Zen Studios provided The VR Grid with a press code for this title and, regardless of this review, we thank them for that!