I’ve played a few DJ experiences in VR from Survios’s Electronauts, an in depth music mixer too Tracklabs’ even more in depth music creation tool and even the more silly DJ mode added to Blood & Truth and while all of those games offer some solid entertainment value, I have yet to actually feel like a DJ as those titles had me playing music without an audience.  Party Pumper looks to be the sim I have been waiting for with myself now on a stage making and mixing beats to get the crowd in front of me up to maximum party status. 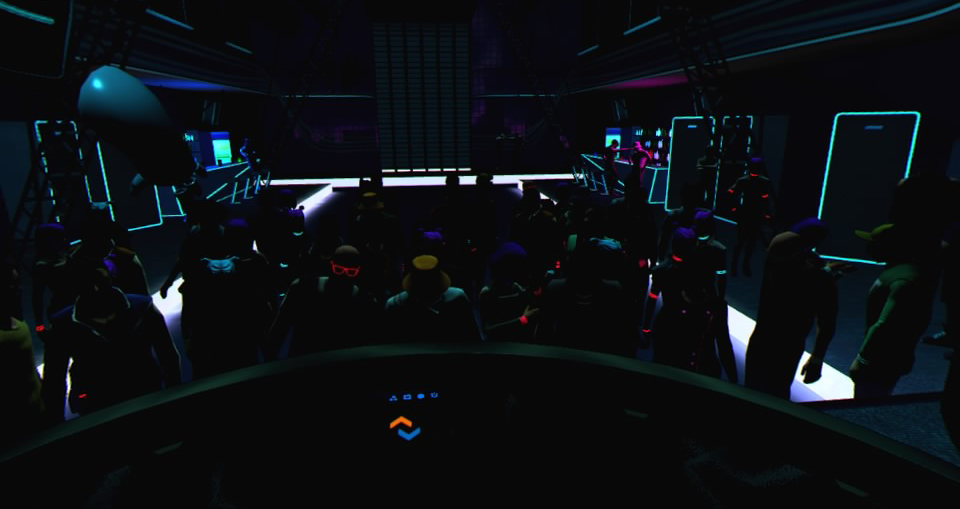 As you’ll be mixing music DJ style, you are going to need a couple of motion controllers to play this  though you won’t be creating sound with turntables, but rather a unique system of placing and manipulating various shapes on a sound board in front of you.  The game supplies you said shapes with each one adding a new sound to the track be it melody, chord, bass or rhythm.  The shapes rise up in the center of the table and can be placed on either side of that central area.   Where things get tricky is that you need to drop them in sync with the song that is playing so they are seamlessly added to the music.  If you place them at the wrong time, they are dead and need to be tossed aside so that shape can respawn, and you can try again.  Once you get your timing down you can twist shapes on the table to amplify their effects and performing successful combo’s that are displayed in front of you unlocks Super Samples that further boost your performance.  Beyond the crowd in front of you lies a party meter which fills up more and more as you successfully chain together your music.   Beyond the music is your robot assistant who hovers nearby and offers up some items to further get the party going be it glow sticks, foam canon, energy drinks and a few other seemingly random options.  Counter to your friendly robot is the party pooper, who will crash the party and needs be disposed of by tossing something at him or by grabbing him and tossing him off the stage.  Take too long and he’ll seriously crush the vibe and ruin your chances at getting a high score by the time the song ends. 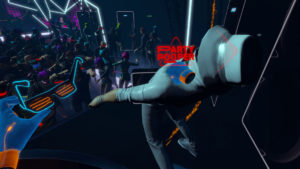 Party Pumper looks alright opting for realistic visuals with a cartoonish overlay.  Both of the environments you play in do the job of putting you in that setting with the first stage being a dance club with a host of people all looking in your direction while listening for your next sick beat.  Lights play in the background and the level of activity is fairly high so where this game lacks in the visual quality department, it makes up for in the amount of stuff happening around you.  The 2nd stage is slightly more laid back with party-goers chilling around a rather large pool drinking casually and talking to one another.  Once the beats start pumping though, the crowd gets a little more into the music, hopping up and down and dancing.  Those items your robot buddy passes you further get the crowd going by letting you interact with them in fun ways.  Waving a pair of glowsticks has the crowd waving their own back you or you can launch some beach balls their way and watch them bounce around for a few seconds.  Your table is solid black with those shapes you place on them coming in a neon green color that pulses and reacts when you interact with them or drop them onto the table.  The whole visual package is simple, but effective save for one minor issue on the pool stage which improperly loaded color on some of the female party goers which ended up painting them all black, which just looks odd.

Utilizing a unique music creation system, each of the shapes you drop will be assigned different music samples every time you play meaning that every time you step into the DJ booth, you’ll be mixing a different song then the last time you stood there.  Everything else is on point with the audience reacting to your music and the more you pump them up, the more excited they get.  Should you screw up too much though, the crowd will begin too boo you, and toss stuff on stage as well, until you start hitting the right beats again or fail out. 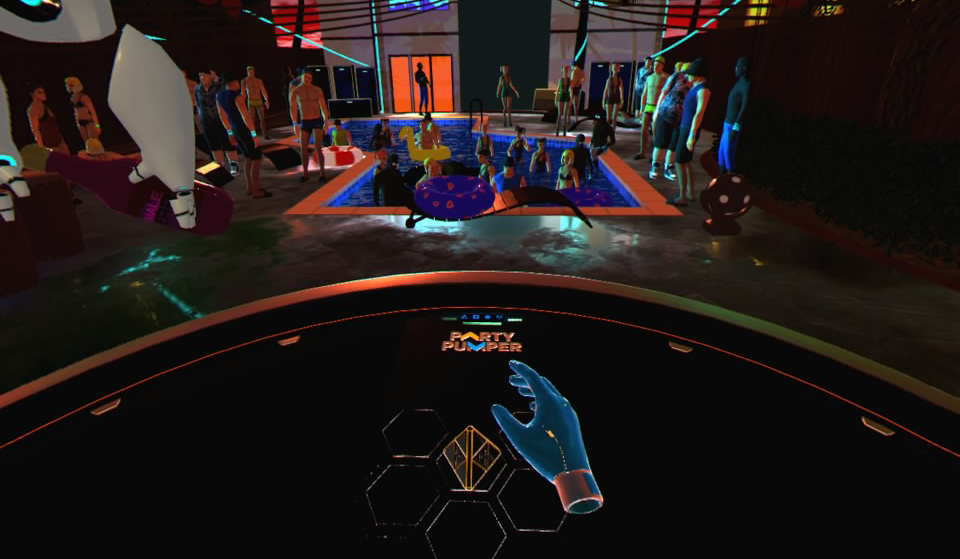 Place the beats and make some noise!

The core of this game is fun but can be frustrating as placing beats can be a challenge and I often found myself mistiming my attempts, though admittedly I don’t have a lot of rhythm.  The different ways you interact with the music and the crowd and vice versa is fun.  Should you screw up or let the party pooper run rampant, they’ll mess up your board and you’ll have to clear of the debris be it water, sandals or whatever else the crowd tosses your way.  The harder difficulties offer up a ton of challenge with the hardest only allowing for the absolute minimum amount of error in making your songs and I never once completed a track on that setting.  Normal was still very challenging for myself and while it’s near impossible to fail on easy, I still had a ton of fun playing in that difficulty as well.  Fundamentally, this is a lot of fun but lacks one key element that really hurts the overall package and that is content.  There are only 2 stages to play in with no campaign or any kind of goal beyond not failing and besting your previous score.  I would have enjoyed starting off DJ’ing a crappy house party and slowly climbing the ranks to more elaborate settings, unlocking more bonus items the further I progressed, but that’s not the case.  The singular mode just doesn’t give me much to do and after I played through each stage a few times, I experienced everything the game currently offers which is a shame as I enjoyed waving my arms to my own beats while getting the crowd more and more excited for what’s to come next. 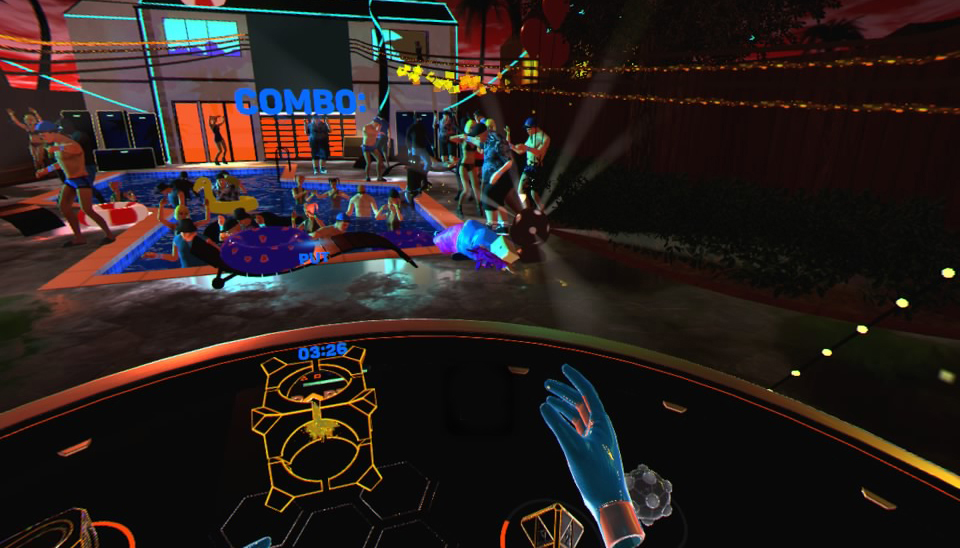 The lack of content does hold this game back, but like I said, I still had a lot of fun messing around with the unique DJ system and all the whacky items that came my way.  After about an hour and half I was done with this as I just could not compete in the hard difficulty, but even playing on the easier settings was still entertaining.  For those who were overwhelmed by Elecotronauts or Tracklab, this is a much more user-friendly DJ experience centered more around casual fun then music creation, and that’s not a bad thing.

What would I pay?  This is $10 US and worth it.  What it lacks in content it makes up for in fun and that low price has me recommending this to anyone who might be curious.

FIBRUM limited provided The VR Grid with a press code for this title and, regarrdless of this review, we thank them for that!