The Squishies are here!!!! For those who like a more casual puzzler, Squishies is just that with you tasked with navigating your little circular creatures across 100 3D platforming stages in an attempt to get them to the goal as fast as possible.  There is almost no story here, just puzzling in its purest form, but does come with a few little additions I’ll cover in a bit. 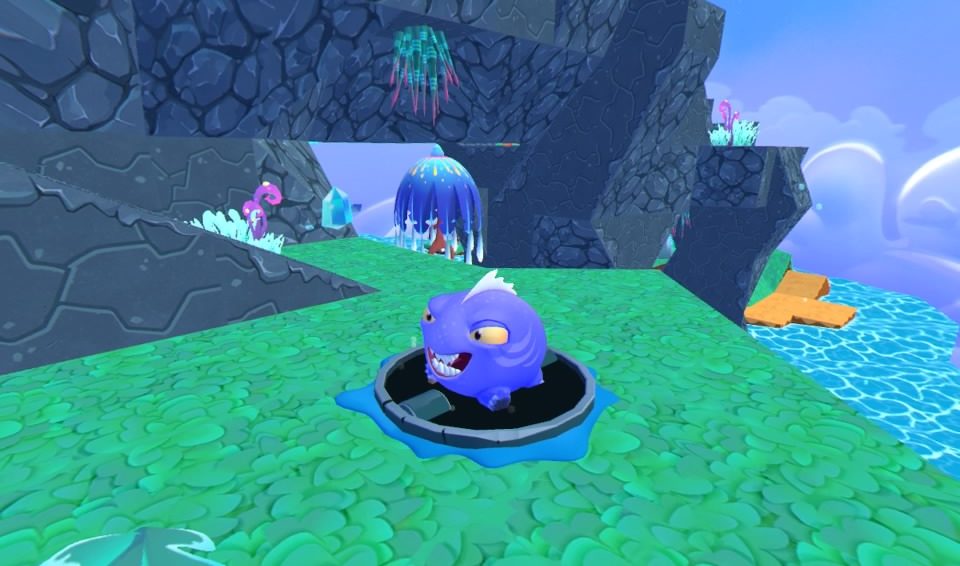 Meet the Squishies…they aren’t all this cute

You’ll need 2 Move controllers, and each performs the exact same functions.  Your move controllers now look like fish and are used to blow and suck the Squishies, little round creatures that act like balls reacting to the environment or your directions.  The goal is to get them from a starting point in a stage to the end. Simple Right?  Wrong!  While it is initially very easy with you just pushing and sucking them toward the goal, soon enough multiple Squishies are introduced, along with obstacles like water, moving platforms, boats, lava, switches, timers, teleporters and a host more options that steadily change up the way you play.  Completing any one stage unlocks the next, but to fully conquer a stage you need to get every crystal scattered around in it and bonus points if you do it fast enough.  Additionally, there are collectable eggs you can find that unlock a little bit of a story told via murals displayed after you conquer 1 of the 5 worlds available, each containing 20 stages.  Stages can take anywhere from a minute or 2 to much more giving the campaign a ton of play time!

If you are of a more creative mind then Squishies offers a fully loaded level creator that lets you not only design your own whacky stages but also features an upload and share system, so you can not only let other play your games but download custom maps as well, essentially giving the game endless replayabilty.  At the games onset you are limited in what items you can use, but as you progress through the campaign, you unlock more and more stuff allowing for more complicated stages.   The controls in this mode are very easy to use, reminding of games like ScuptrVR of all things, with you selecting items from a sub menu and then placing them wherever you want almost as if you were sculpting these levels.  Throw in some logic circuits, pressure plates and even more stuff, there are a literally ton of options to make insanely complex puzzles or just make some pretty looking levels thanks to the colorful and bright nature of the game. 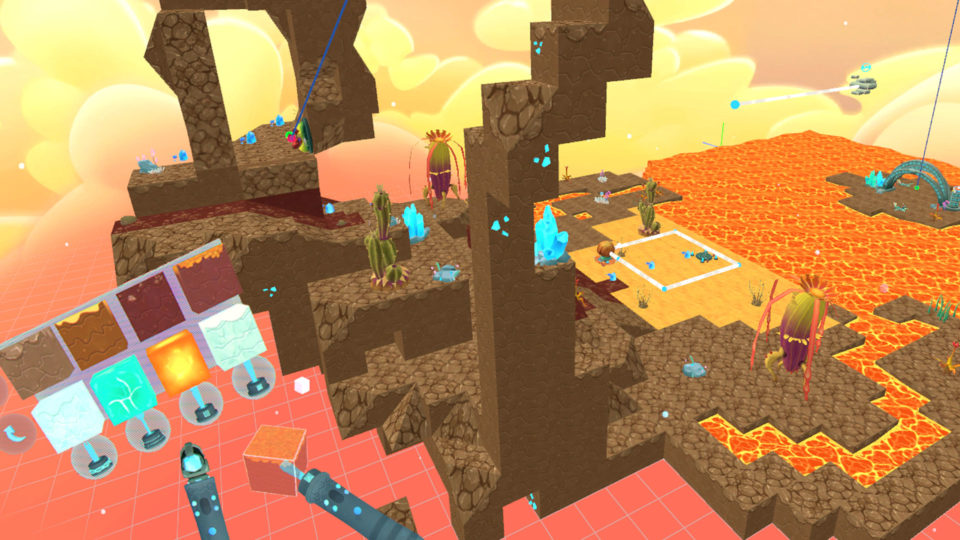 The level creator tool lets you make whatever you want!

Squishies looks great, capitalizing on the simplicity of the game by making a very clean looking title.  As I said, the game is very colorful and so damn cute.  What’s interesting is that you can zoom in or out giving the levels are great use of scale making them look like dioramas from a distance and fully fleshed out 3D worlds when you are up close.  Details pop when you zoom in close, but even viewing the stages from afar makes them feel massive and in some cases, daunting when you realize you need to these little guys to the other side of a huge level.  Each of the 5 campaign worlds changes up the level themes and introduces new elements quite often.  As the stages are built on a square grid system, most obvious in the ground you roll the Squishies on, the game looks blocky at times, but no matter what level you are in there is a great sense of charm and polish behind every element in the game.

The audio is a mixture of light-hearted orchestral tracks that pepper the campaign with some other random effects sprinkled in for good fun.  Your Squishies will make the occasional sound, especially when they die, with other creatures and plants in the environment making appropriate noises.  It all fits perfectly with the game and compliments the action nicely. 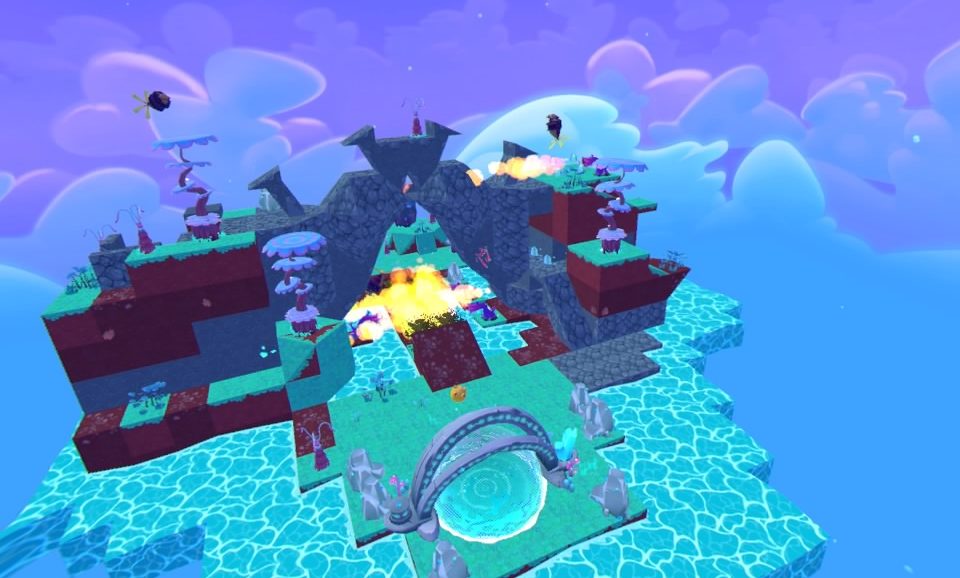 New elements are constantly being introduced.

The mechanics are very simple, and the level design gets very complex which doesn’t always lead to the smoothest experience.  Because you need to blow or suck your Squishies, they don’t always roll where you want them too.   This can lead to frustrations, especially in areas that require precise movements, but that’s just an issue of skill and patience…protip: sucking is way easier then blowing!  On a few occasions I got my Squishies stuck on the environment forcing a restart of the level.  It’s also worth noting that I had the game crash on me twice, once corrupting my save data forcing me to play through the 1st 15 levels again and the second causing the game to freeze and requiring a restart.  Besides those issues, the game design here is next to flawless and while the controls may lead to some frustrations, that’s the name of the game here and it doesn’t take too long before you are sucking and blowing like a champion. 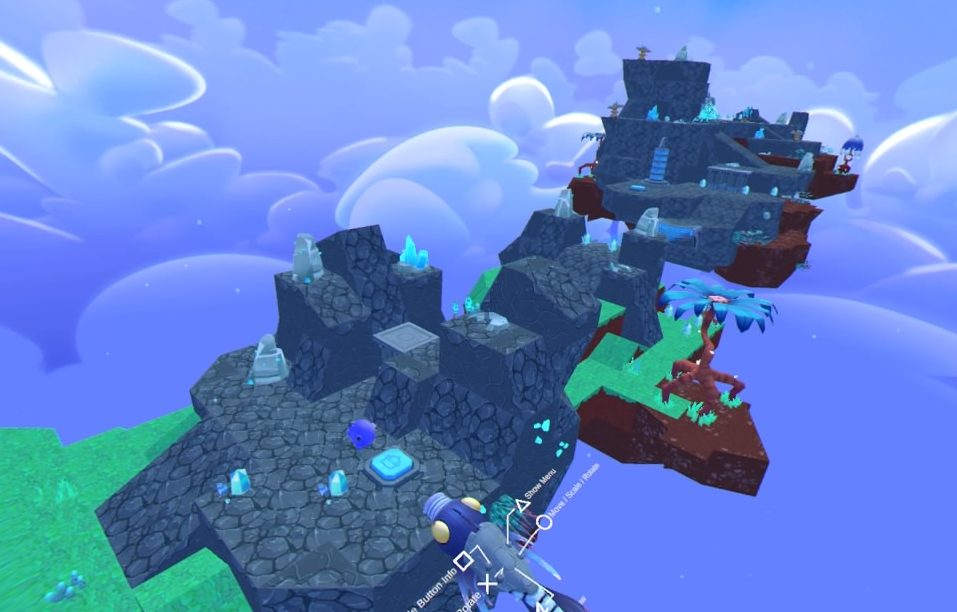 Squishies fits right alongside games like Waddle Home and Salary Man Escape and if you enjoy platformer puzzlers then I think you’ll get a kick out of this too.  With loads of pre-made content and the limitless options provided by the level creator and sharing tools, you could spend hours trying to solve endless amounts of puzzles!  If you are in the market for a family-friendly puzzler with a lot of polish and charm, then I say give Squishies a go!

What would I pay?  The $25 asking price for this is fine provided you are into these types of puzzlers.  For someone like myself though, while I did enjoy my time with the game, a $20 price point seems a little more apt.  Like I said though, there is a ton of value here and you get a lot of bang for you buck so no matter what you pay, I doubt you’ll feel ripped off.

Brainseed Factory provided The VR Grid with a review code for this title and, regardless of this review, we thank them for that.