Vigilante Ranger is a game that clearly wanted VR as its initials as the title makes absolutely zero sense otherwise. It’s the future, robots messed up the world and now you, Vigilante Ranger, are humanity’s last hope as you take on hordes of robots in first-person tower defence action. 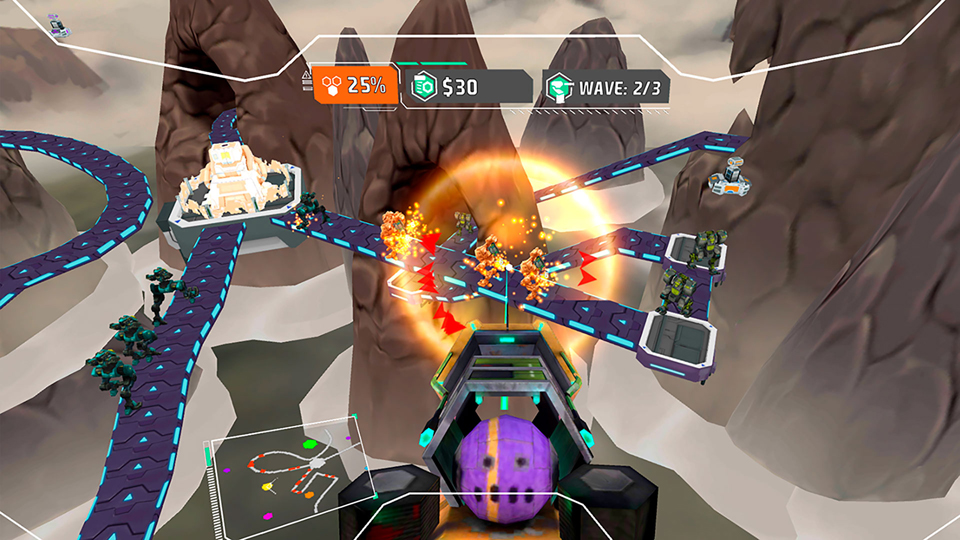 Utilizing only 1 Move controller, much of the controls here are a direct port the Gear VR/Go version of this game and that’s not a good thing.  Each stage is setup in typical Tower defence action with a few teleportation points placed around the paths that the incoming robots will travel upon in an effort to get to your base and if that is destroyed, you die.  Each of those teleportation points is equipped with a different weapon so changing your vantage point also changes your arsenal with each gun having different fire rates and damage with 1 causing explosive damage.   Every robot you kill gives you loot in the form of junk that can spent to upgrade each of the weapons at the gun shop in between missions.  There are 16 missions in total which won’t take any more then 10 minutes each to complete with each stage having bonus objectives like killing a certain amount of enemies with a specific weapon, finding all the hidden boxes in a stage or finishing with your base above a certain percentage of damage.  Those bonus objectives as far as I can tell serve no purpose except to give you something else to do besides just killing the robot horde. 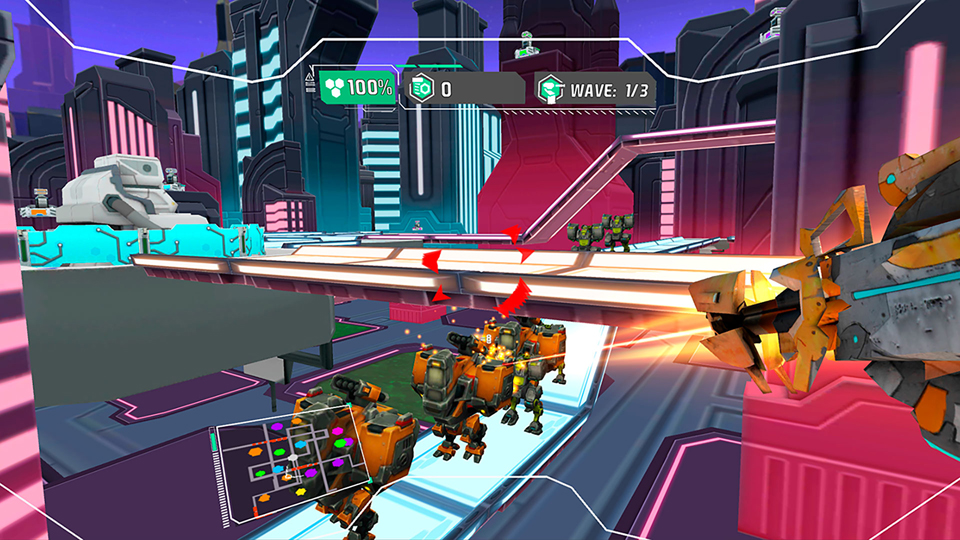 Some weapons in this game are useless.

Visually, this game looks like the mobile port it is, offering lower quality textures and some rather obtuse levels designs as the robot’s spawn at one end of stage and try to make their way along very obvious paths to your base.  How these robots beat the human race is beyond me as they are nothing more then canon fodder for you, a lone soldier.  Those robots come in a variety of forms from very quick smaller ones to giant lumbering mechs and a few more in between.  Unfortunately, save for the boss battles, you’ll never see new mechs after the first stage making for no surprises save for how a level is designed.  Guns look alright with everything in here having a cartoonish and exaggerated look with the campaign taking you through 4 different settings from cliffsides, mountains and a futuristic city.  Nothing in here looks great, not necessarily awful but temper those expectations as this does nothing special and even messes up scale with the final stage showcasing you as being maybe a 2′ tall person, but that really is only noticeable during the 1 segment in the game.  Audio is also nothing special with a few musical scores that pepper the game, though typically fall into the background amidst the pew pew’ing of your weapons with the robots walking in almost complete silence and even they explode, very little is heard. 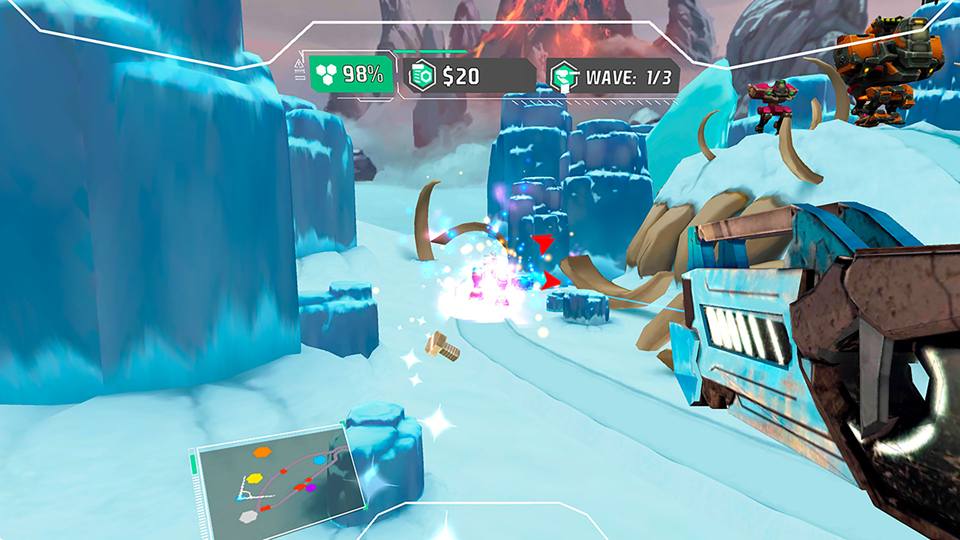 When they robots come from multiple paths, the difficulty ramps up.

Vigilante Ranger falls apart in so many ways and while it tries something akin to Ancient Amuletor or Quivr, it instead is one of the most generic tower defense/wave shooters that fumbles over poor gameplay choices and broken mechanics.  Your gun, while mapped to the Move controller doesn’t behave like a weapon in hand but one mounted to your side and only rotates around where your hand should be creating insanely awkward firing angles as your gun may be way above your head or even upside down as you pick off your foes.  To teleport to a new node, all you need to do is look at that node for second and you instantly move to it and this unintentionally happened to me so many times it became infuriating.  Some vantage points offer terrible views of the stage and I found the best strategy was to pick 1 point and just stay with it as teleporting is also disorienting when you unintentionally do so.  Boss bottles offer very little in the way challenge as they just involve a quick teleport to stay out of their weapons sights as you pick them apart with the available guns.  Some weapons fire so slow they are useless at far distances with the environment often swallowing explosive shots making them also useless.  In fact, the only real bright point in this game was the prologue before the game starts detailing the events leading up the game’s onset, hearkening back to earlier years in gaming and is something I feel is missing from modern day games. 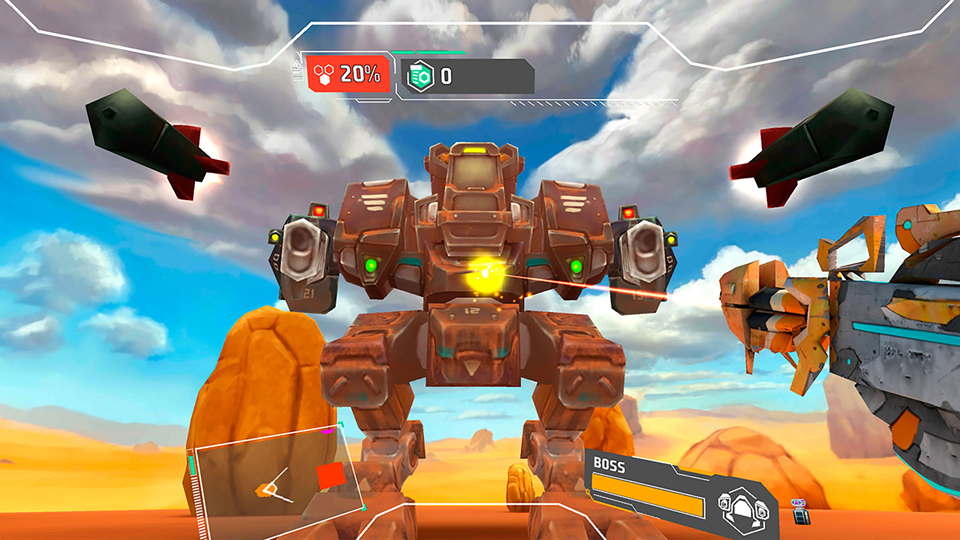 They may be big, but they are next to useless.

Unfortunately, Vigilante Ranger’s few redeeming qualities are far outweighed by its faults, making for a game that just isn’t that fun.  If the Move controller was implemented properly or this even had Aim support, it could be worth a look for those on a budget, but as it stands now, I really don’t know who could like this game in its current state

What would I pay?  Nuthin’… not one penny.  Not only is this not worth your money, but it’s not worth your time.   It’s clear this was an almost direct port from an inferior VR headset and fails to utilize standard VR controls of the more powerful HMD’s.  Add on the fact the game is peppered with frustrations on top of what is at best, a boring shooter experience and there is really no reason to pick this up.