For those who aren’t aware, Final Space is a cartoon that aired on TV for 3 seasons (and is currently on Netflix) and follows the adventures of Gary Goodspeed, a dimwitted astronaut who gets wrapped up in a plot that could destroy the universe. ‘The Rescue’ takes place (I think) sometime between season 2 & 3 and tasks you with assuming the role of one of the 4 main protagonists in trying to save your little buddy Mooncake from an unknown threat. 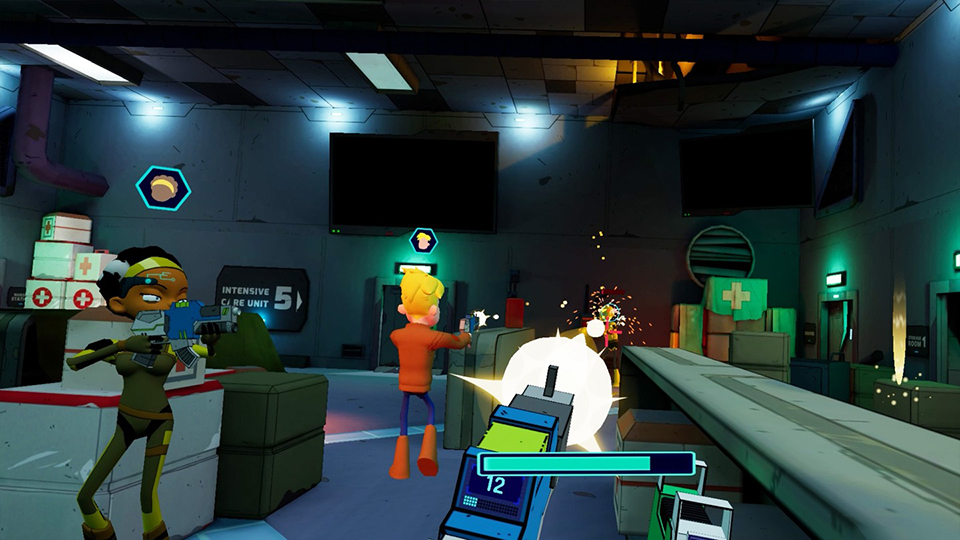 Your favourite space heroes return…assuming you liked the show.

Final Space is a dual wielding shooter that has you traversing a space station, destroying anything that gets in your way.  Off the hop, a few comfort options are available allowing for full locomotion all the way down to teleport and click-turning ensuring almost anyone should find a setting they like.  After choosing your character (it doesn’t really matter who you pick) you are treated to a plodding tutorial which breaks down how to move, duck, shoot, store weapons and use items found on your journey.  The campaign has only 3 stages to get through, each taking roughly 40 minutes with each level being playable on 3 difficulties, which just seems to bulk up the enemy’s health but that does add significant challenge when they come in near overwhelming numbers.  While you can go at it alone, arguably the best feature in the ‘The Rescue’ is the up to 4-player co-op which makes the game not only easier but substantially more fun (more on that in a bit).  You’ll navigate through massive rooms and smaller corridors, all while facing opponents that get increasingly harder.  Weapons have infinite ammo but still expend rounds so with many of them you’ll have to reload often though a quick reload option is available if you time that button press with a loading meter that pops up when you run out of ammo or press the reload button.  Throughout the campaign you’ll find a few guns, each offering their own pro’s & cons based upon fire rate, damage, reload speed and so on with all the weapons being able to be used single or 2-handed.  Health automatically regenerates once you stop taking damage, though should you be in dire need of a pick-me-up, enemies may drop cookies that will give you a little boost should you be in the thick of things.  All of that leads to a game that plays like a run-and-gun shooter, while more like walk-and-gun as there is no run option and your walk speed is painfully slow, pitting you against hordes of enemies that stand in the way of you and victory. 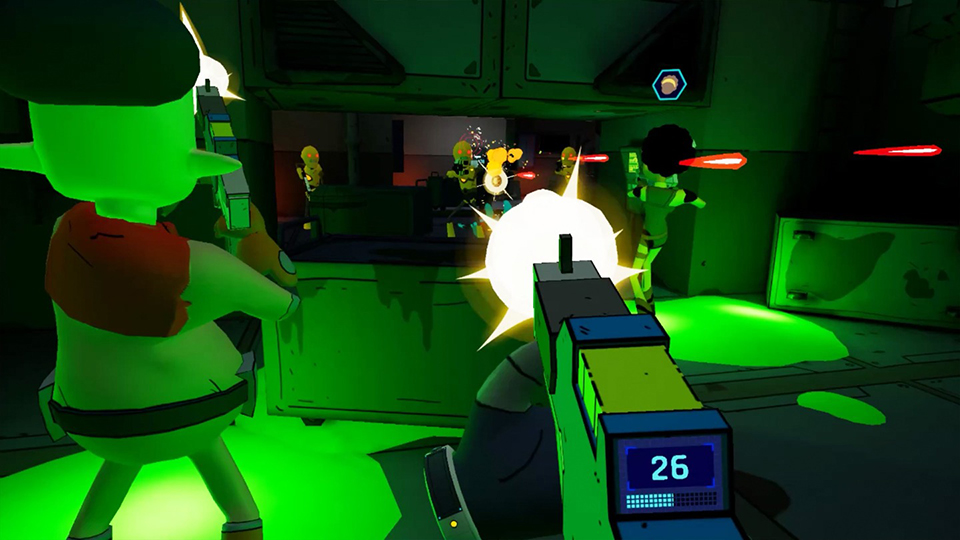 As this is inspired by a cartoon, the visuals here are of the toony variety, though transferred to 3D making the game look rather bland and I would have much preferred if the developers had gone a more cell-shaded route as not only does that look better in the headset but would stay a little truer to the source material.  Regardless, the game doesn’t look bad by any stretch with all the characters you (might) know from the series coming to life.  Armies of SAMES (idiotic humanoid robots) will run at you or shoot you from a distance and come in a few forms with their numbers being bolstered by additional station security and even an alien infestation which will direct a number of crawling, head-crab type creatures your way.  Everything is rendered well enough though there isn’t too much here to be excited about as levels are largely static and offer no lighting effects or significant changes from the 1st stage to the last save for the final boss battle, which I really enjoyed.  The prison ship you find yourself in repeats the same sections and corridors again and again and while that is typical of these types of gaming environments, when factored in with the encounters, the game started to feel rather redundant before the end of the 1st stage.

From what I can tell, the characters in here are all voiced by the series actors adding a nice layer of authenticity to the game and includes some of the same humor as well, though after watching the 1st season, then playing this, it’s clear the more adult jokes have been stripped from this game and replaced some more kid friendly dialogue. There is a decent amount of scripted story, and it falls in line with the series themes, but it still feels like Final Space light when it comes to the comedy. During combat, you and your foes will occasionally spout out one-liners that repeat fairly quickly though are fairly easy to ignore with the action being accompanied by a decent soundtrack that will be familiar to fans of the show. Should you play this with others, voice chat is in full effect allowing you and your pals to chat it up while coordinating your attacks. 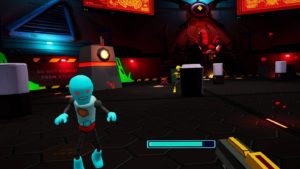 Final Space: The Rescue has all the groundwork in place to be a decent little co-op shooter but ultimately fails to deliver on satisfying gameplay. It’s not bad per se, but it’s not that engaging either with almost every encounter feeling the same as the last, even when you face a new foe. You can’t run and the pace you walk is painfully slow, artificially making some encounters more challenging. Gunplay is also rather stock and while the game tells you to grab a weapon with 2 hands for more stability, as far as I can tell, that is not the case and dual wielding 2 of the same gun still offers up the exact same stability making 2 guns the easy choice to get through the game. Outside of scanning your hand at doors, there are no other VR interactions beyond the combat making this feel like a bare-bones shooter. Some of those issues are remedied by playing with friends as the solo experience gets redundant quickly. When in the online action, it’s just more fun though I do recommend playing on hard as the game gets easier with others. When I did find a pal to play this with, it reminded a lot of a stripped down After the Fall offering countless waves of baddies to take out while your and friends hunker down in a corner of a room somewhere. It’s in the co-op where this game shines and if you do decide to pick this up, convince a friend to as well as you’ll have way better time that riding solo.

I always appreciate when an established property dips its toe in VR and ‘The Rescue’ does a little more than that, but still comes off as an experience you’ll play once and forget about.  The gunplay works, the story is alright, the game looks OK and I think fans off the show will probably appreciate this last little adventure as the series was recently cancelled.  If you’re in the market for a little mini campaign shooter, The Rescue is alright but if you want to get the most of out of it, play this with others. 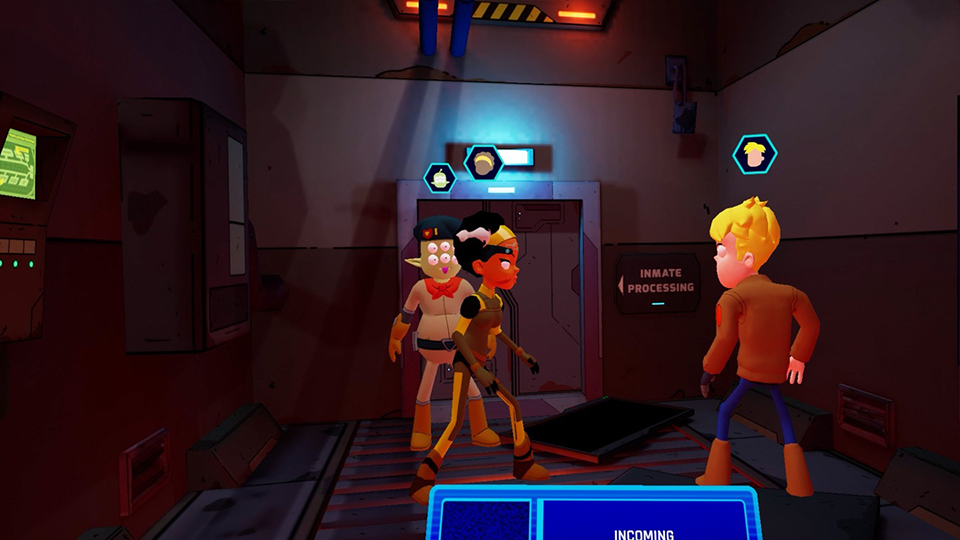 Playing with friends is the best way to play this!

I always appreciate when an established property dips its toe in VR and ‘The Rescue’ does a little more than that, but still comes off as an experience you’ll play once and forget about. The gunplay works, the story is alright, the game looks OK and I think fans off the show will probably appreciate this last little adventure as the series was recently cancelled. If you’re in the market for a little mini campaign shooter, The Rescue is alright but if you want to get the most of out of it, play this with others.

What would I pay?  This is $15 US which is on-point for the content in here.  The campaign won’t take more than 2-hours to get through and except for hearing the different story dialogue playing as each character, there is little reason to return save to hook up with friends, which is the best reason to play this anyways.

Grab Games provided The VR Grid with a press code for this title and, regardless of this review, we thank them for that!