The 1st Quest 2 exclusive title is here and it’s a banger in the form of the made for VR version of 2005’s Resident Evil 4, which casts you in the role of Ex Raccoon City cop Leon Kennedy, now working for the US Government who has been dispatched to Spain to rescue the President of the United States’ daughter, Ashley.  Hailed as one of, if not, THE best game in the RE series, seeing multiple releases across multiple platforms, it’s interesting to see this 3rd person action title get the 1st person VR treatment so let’s dive in and see if that transition can succeed where few others have ventured…and for the record, I’ve never played RE4 before, though I loved the franchise up to that point. 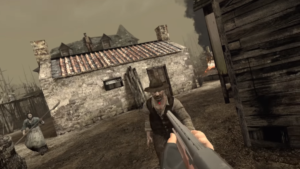 They are simple folk, that’s for sure.

With RE4VR being in 1st person, the experience is a little more personal as you are no longer just controlling Leon, you are Leon.  After a 1-time, not so quick optimization loading screen, your off, with the game giving you the option of playing in Immersive Mode with items assigned to areas of your body.   Your right hip carries your handgun, ammo is stored on your left with your guns (rifles, shotguns ect.) being strapped over your right shoulder, health on your left and knife on your chest.  Should you go with the Quick Select option, all your item choices are assigned a pop-up wheel menu that lets you select what you want while pausing time so you can navigate this cumbersome option, which I did not care for at all and thus stuck with immersive mode.  Once started you are treated to the opening cut scene (more on those in a bit) and soon enough are thrown into the thick of it and must defend yourself from some crazed villagers. Thanks to a laser on your pistol, which can be toggled in the options if you are finding the game to easy, shot accuracy is incredibly precise with enemies and creatures dropping loot upon death that will move up to waist height when near them and disappear, once grabbed, into your inventory making RE4 easy to play whether you want to play seated or standing.  The inventory and menu system are a little clunky for VR as a separate menu with multiple tabs open up at the press of the button allowing you read documents found, change your settings and manage your inventory though by no means is it Skyrim levels of cumbersome, it just feels built for the flat game and I would love to have seen a more tactile option in place ala Saints & Sinners.  Leon only has finite space to carry everything he needs too (quest items don’t count towards storage) with his inventory being broken up into a square grid with each item taking up 1 or more squares, including your weapons with your inventory space being upgradable throughout the campaign.  Once you start picking up ammo, health pickups, grenades and whatever else you stumble across, inventory management becomes its own mini game as items may have to be sacrificed or sold to make way for new vital stuff like weapons or health.  Thankfully, a merchant will pop up here and there that will allow you to not only buy and sell various good, but also upgrade your weapons using the gold found around the game and from dispatched foes so it’s best to explore every nook and cranny as those upgraded weapons will be critical in your success.  Lastly would be the need to manually save using typewriters found throughout the game with 20 save slots available and require you to manually type in your saved game name using the hunt and peck method highlighting that Leon is a man of action and doesn’t deal with the paperwork. 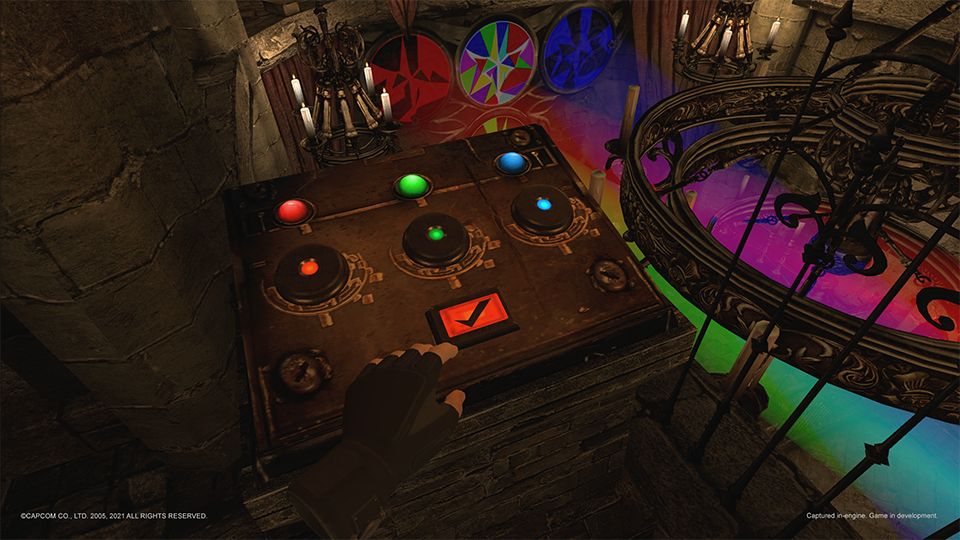 RE puzzles are always so obtuse…and I love it!

RE4 has been faithfully ported to VR and that’s a great thing and, at times, a not so good thing, especially when it comes to the visuals, which do look like they are a few generations old.  Make no mistake that this is still a AAA title with the scope of the game ranging from small set pieces like a church or house to cliff side villages and a massive castle.  Unfortunately, being even closer to the action than ever before does highlight some lower poly models, especially in the foliage with any other textures looking rather dated if looked at to closely.  On that same token though, I am inside an older game and it’s just amazing to be in the action like never before, making it a sort of give and take relationship as the visuals remain faithful to the original release and any superficial shortcomings can easily be excused by the games age.  Even when it’s not at its most impressive, RE4 is one of the biggest games to ever grace the headset with a campaign clocking in somewhere in the 15 to 20 hour mark (or more) and provides a plethora of locations and enemies to get through from lowly peon villagers to massive enemies like the El Gigante and Del Lago, the former being a massive cave troll type being and the latter being a disgusting mutated crocodile with the game offering plenty more bizarre and outlandish foes the further you get in campaign.  Lighting effects on your weapons look fantastic, but outside of those, there’s isn’t much else to praise with much of the game only having the occasional static effects casting on the environment, which still helps out the presentation, which overall is fairly good.  It’s actually odd to judge the visuals here as while this doesn’t look as great as some of the titles we have seen for the Quest 2, the overall scale of the presentation is markedly better than just about anything available for the headset. 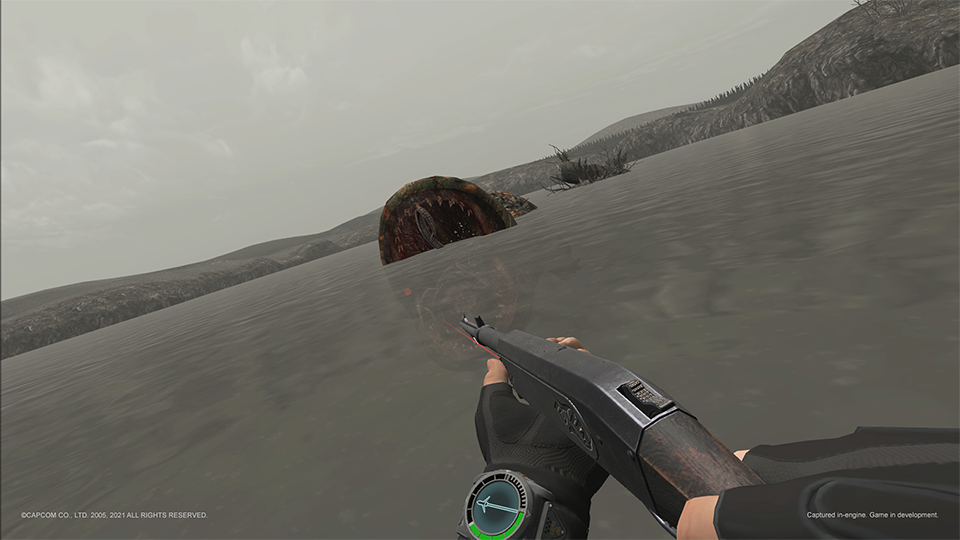 You could definitely use a bigger boat.

Resident Evil 4 marked a notable change from horror to action and changed the direction of the franchise to being a little more action packed, but 4 still offers up some of the campy dialogue that made the franchise famous though hardcore players might notice original script changes and removals thanks to conversations being judged by the standards of today.  I didn’t notice any exchanges sounding incomplete and by all reports, the dialogue in question is sexually based and sometimes a bit sexist, so it’s not really needed anyways.  Outside of that is a narrative heavy story loaded with twists and turns as characters reveal themselves and their intentions.  You’ll be in contact with Hunnigan via the coolest satellite flip phone ever made as she helps guide you through the story with all the sound effects sounding on point save for some the soundbites used on enemies as multiple shots directed their way elicit the same grunts and groans repeatedly, which is comically annoying.  I found the 3D audio be nicely implemented as enemies would sneak up on me with the only indication being the sounds of their shouts nearby, allowing myself to adjust my attacks accordingly to ensure that I didn’t get overwhelmed.  Lastly would be the soundtrack with is nothing short of cinematic, kicking in when the action and suspense ask for it and disappearing when no enemies are around, and you are free to explore. 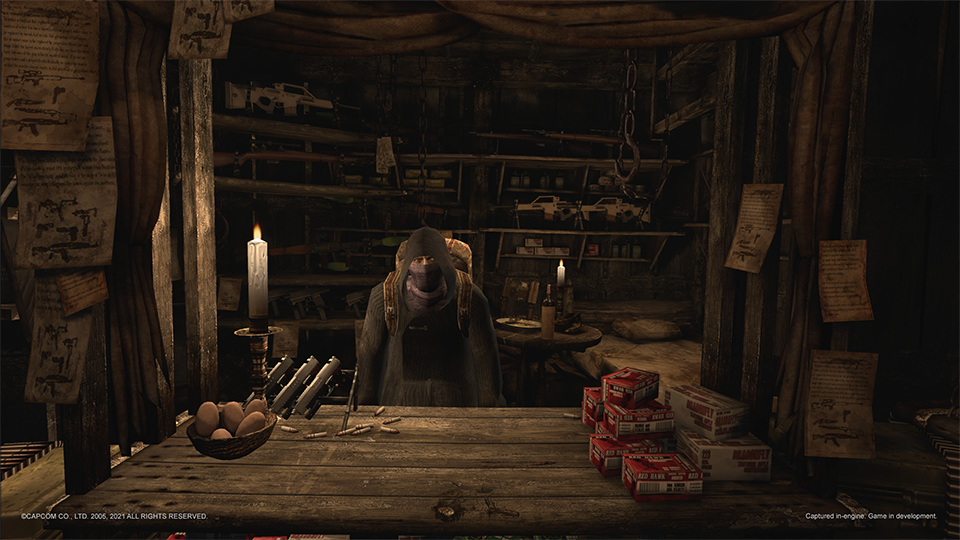 This guy really comes in handly.

While the core gameplay has made the transition to VR quite nicely, as this was a 3rd person title with cut-scenes galore, not everything could be ported to VR proper. Cut scenes do interfere with the action as, when triggered, place you in a black void theatre and let you watch the scenes unfold on a big screen.  I totally understand why this is the way it is as those cut scenes were only ever created for TV screens and redoing them in 1st person VR would not only be cumbersome but could actually hurt the cinematic quality of those scenes and take away from the story.  That said, when they kick in, it can still be a little jarring, especially when they occur for simple actions like jumping over a fence, activating a switch or kicking down a ladder.  Small oversights like needing to use only your knife to bash in crates and barrels while carrying a pistol make that task slightly more of a chore than it needs to be as does climbing up ladder which instead of just gabbing and climbing, you just need to press A and then teleport up or down it.  Reloading your weapons is semi-realistic with you needing to grab your ammo and place it in the weapon with the game automatically ejecting any empty clips and a quick cocking of the barrel has you good to shoot again.  Quick Time events have now been replaced by the need to waggle your controllers in specific directions to run, swim or fight your away out of a cinematic situation which can be comical at times, but is a solid solution for VR and much better than having to press buttons in a timely fashion.  All these whining’s aside, and they really are minor complaints, RE4 still offers up a large variety of gameplay mechanics in a massive campaign that has you exploring crazy settings, killing all types of monsters and solving bizarre puzzles typical of the RE franchise. The VR implementation may not be perfect but it’s honestly way better than I expected it to be! 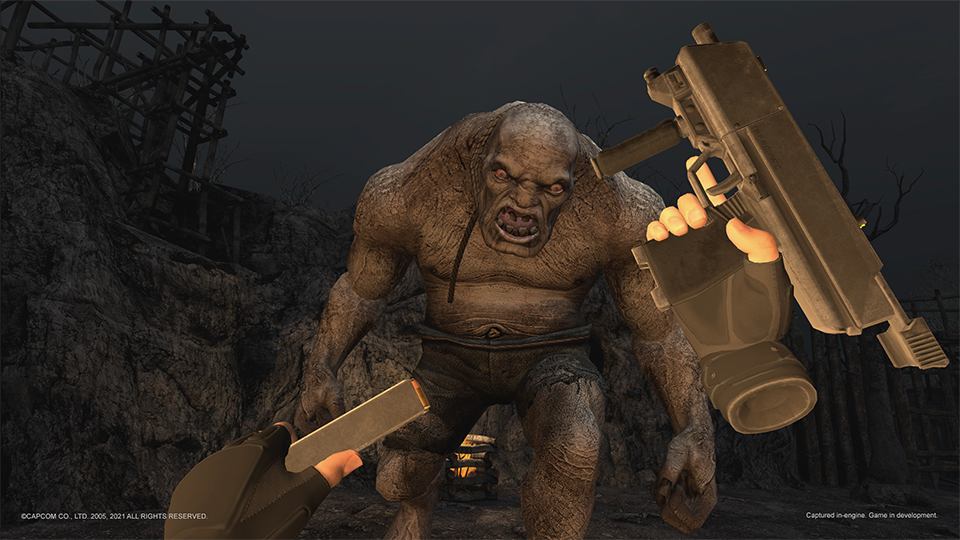 A face only a mother could love!

Resident Evil 4 VR is a tour de force for the Quest 2 and really highlights just how much game you cram into the headset.  Granted it is a remake of an older game, but that only has me wondering if we’ll see more classics get the VR treatment as this proves they can work quite well.  What could have been phoned in with a lazy port has been given a little extra TLC and VR interactions to make this a title that feels made for VR and that’s impressive…now I just need RE5 and 6 in VR please!

What would I pay?  This is $40 US and totally worth it!  The campaign is a lengthy one, the combat is great, and that classic Resident Evil horror/weirdness mix is here in full force making this easily one of the best games available for the Quest 2.