Welcome to the year 2076, where you are an elite soldier with the ability to slow down time–called “Reflex” power. You play as a member of an Orb Extraction Unit, on your way to extract highly volatile energy matter–Orbs–from chambers on the moon. With only a few minutes to defend yourself against the onslaught of alien-built robots protecting the chambers, you’ll discover so much satisfaction annihilating those ‘bots via your “Throw, Slow & Shoot” combat strategy. 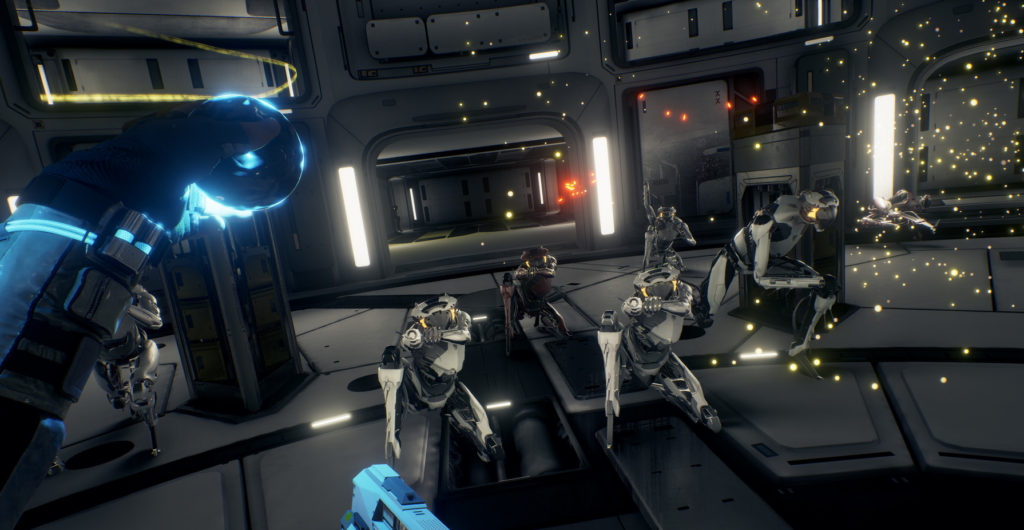 Be aware, be brave or be overwhelmed!

This single player game has been out for a while but I wanted to give it a go with the Overrun expansion pack being released for no additional cost. What a great decision this was! This is the best Vive game I’ve played to date. The polish level is more than I’ve seen in any other VR game. The sound, visuals and controls are super tight. This was the first time I’ve played a VR game and been blown away with every single aspect of a game.

Starting with the tutorial I got the feeling that I was going to be overwhelmed with the amount of orb power-ups. Honestly, I didn’t find that the power-ups were overly useful. The guns as well felt neutered compared to other shooters if the same ilk. Your primary methods to beat as many baddies as possible is to use the orbs. Mastering the orb throw is a little tricky but not too bad.  All of these shortcoming are also irrelevant as the fun you’ll soon have fending off wave after wave will have you to busy trying to survive to worry about little things.

Slowing down time is the primary mechanic of this game. Throwing the orb and slowing down time to shoot them is the best strategy to get to enemies behind cover. It’s also the fastest way to pass every level. There’s something very creepy about the movements of the enemies and I may have screamed once or twice when I felt like the enemies were jumping straight at me. I think a sign of a successful VR venture is when you, the player, let out a scream in surprise or fear.

Combat is fast paced and intense.  Genre tropes like explosive and destructible environments as well different weapons and powers all serve to mix up just how dispatch your foes.  The key to victory is utilizing a combination between your orbs, and powers to their max effectiveness, which will take time to master.  There are currently only 2 levels available as of this review, but the Dev promises more updates to  content including multiplayer as well as continuing to add new modes, levels and power ups. 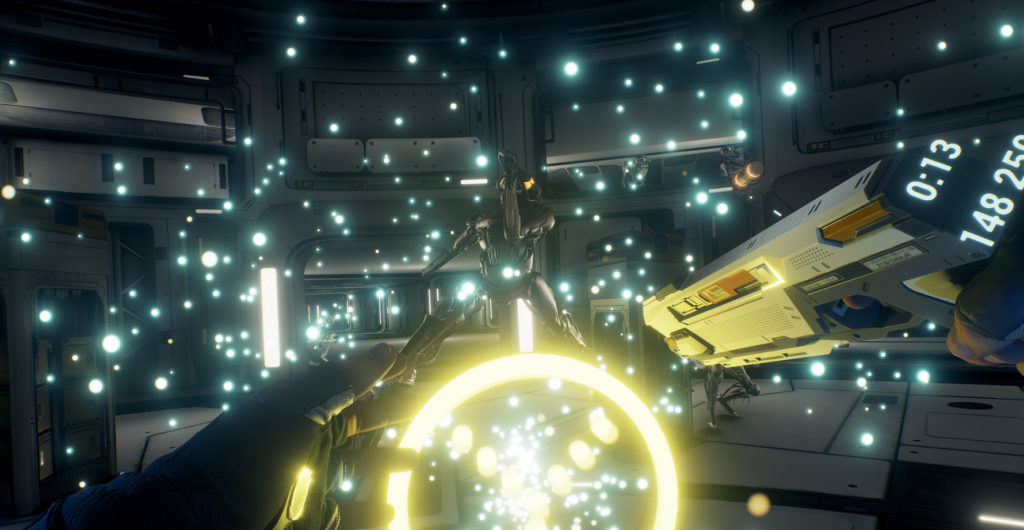 If you like single player shooters in Virtual Reality than ROM: Extraction is an absolute must for your collection. Without a doubt you will find this is a game worth just over $5 (If you’re getting it on sale) if you’re thinking of getting it at full pop, maybe watch some videos of the gameplay first to see if it’s your kind of game. I think even at full price it’s well worth it. The developers did a great job polishing this game and giving it as much depth as can be expected from a wave shooter. Don’t expect to be moving all over the place but watch your back