So, it’s probably the future and suprise, suprise, the world is messed up…like really messed up and it’s up to you to not only save what’s left of it, but figure out who you are and how the world ended so screwed up in the first place.  With your trusty cybernetic hand and bow and arrow,  you traverse these strange lands in search of answers and maybe fend of the occasional homicidal robot. 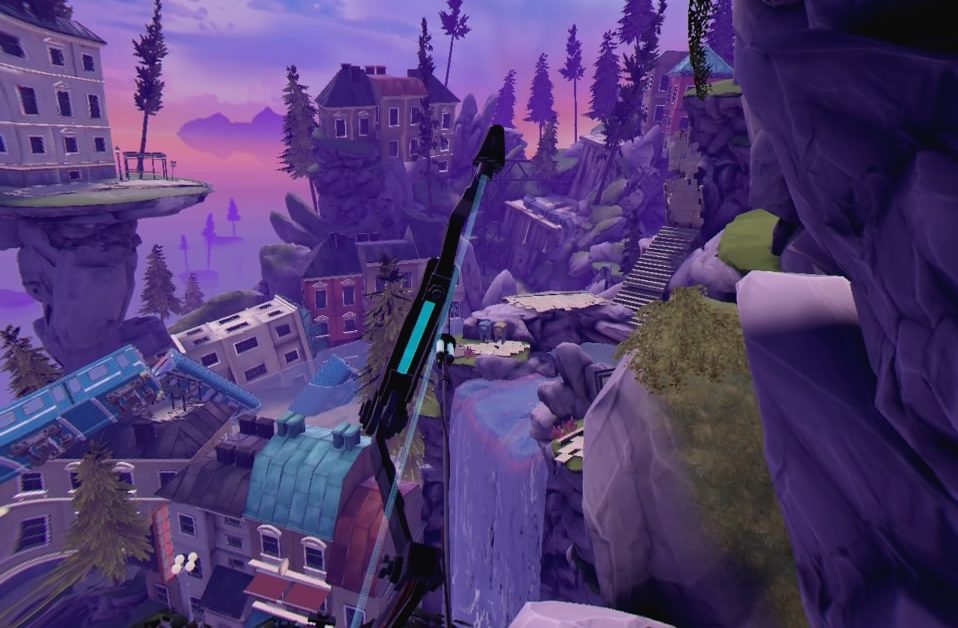 The Earth has seen better days!

The use of a bow and arrow should be your first clue that this is Move controllers only and thankfully you have a host of movement options available including free and click turning, blinders and the option to play seated or standing.  The archery stuff plays very similar to what we saw in Ancient Amuletor, with your stock arrows having infinite ammo and your other more powerful shots having to cool down in between reloads.  Movement can be done by walking or teleportation, which is awesome, but I found the walking and free-turn speed to be a bit slow and at the time of this review, click turning, though an option, seems to be disabled in game.  Your robot left hand also acts as your menu, where holographic windows pop up showing off you inventory, ammo selection and a few other menu options.  After that it’s basically walk around the maps, listen to your guide (more on that later), interact with computers and card scanners and fight off robots.

I like the visual style here, but in no way is does it carry any crazy amounts of detail.  Think of more as the real world smoothed out with a slightly cartoonish overaly.  Colors are bright and vibrant, even when in darkened areas, which gives it that slightly surreal feel.  The Earth has been busted up real bad with buildings and environments sharing the same space, making for some interesting set pieces.  Buildings are at odd angles, cliffs may have a light post sticking out of it while sections of building seemingly are placed  randomly, as if teleported there, and black tears in the environemnt hammer home that whatever befell the Earth may still be happening .  It’s hard to describe but it is a unique looking world that I enjoyed exploring.  Enemy robots are inspired by animals with the most common being a spider-like creature whom you’ll encounter throughout the whole game.  The menu that pops up on your robo-hand is a nice way to not break immersion and all-in-all I liked the visual style presented here.  There were some odd reflections that just didn’t match what should be mirrored, but that’s a minor issue. 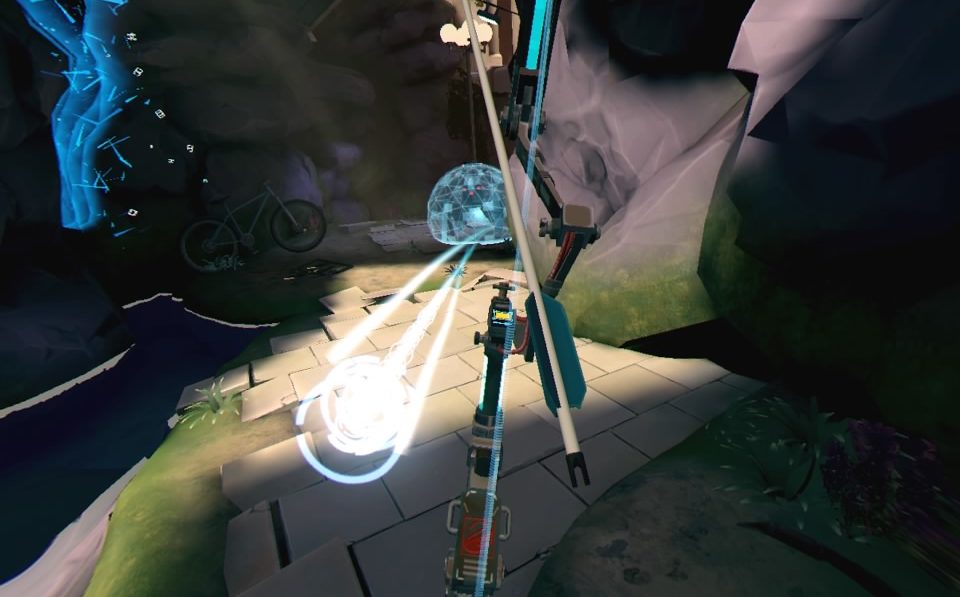 These spider-guys with the shield suck!

The audio is much more of a mixed bag with some epic music, solid sound effects and great voice acting that is taken back by a few issues.  There is no 3D sound that my ears could detect here so whether it’s to your left or right, whatever you are hearing sounds like it’s right beside you. Secondly is that when entering or leaving certain areas, the ambient sounds in that area will just kick in, or quit depending on if you are coming or going, which is a little jarring.  Like Skyrim, when the music suddenly changes, you know enemies are about which is a great way to warn you of an impending fight, but as the game does fall into a very predicatlable formula, this shift in the music became uneccessary as I knew exactly when a fight would start.  Lastly would be the lack of sound your steps produce, making  for some way to silent moments.  Still, minus the lack 3D audio, the rest of those issues are minor and for the most part, the audio works, it’s just a little inconsistent.

Apex Construct offers up hours of gameplay, but be warned that a lot of the game involves revisiting areas that you have been to before in the now classic metroidvania style.  Much of the game has areas blocked off until you find the proper level clearance card.  When you find these cards, they are stored in your inventory and can be grabbed before any mission.   Enemies drop RP which can be spent back at your home base on upgrades.  Whenever you load the game or finish a mission, you are brought back here.  Items you have found are stored in your home, as is the upgrade station and the computer which lets you select the next stage in the story, or any of the previous stages completed. 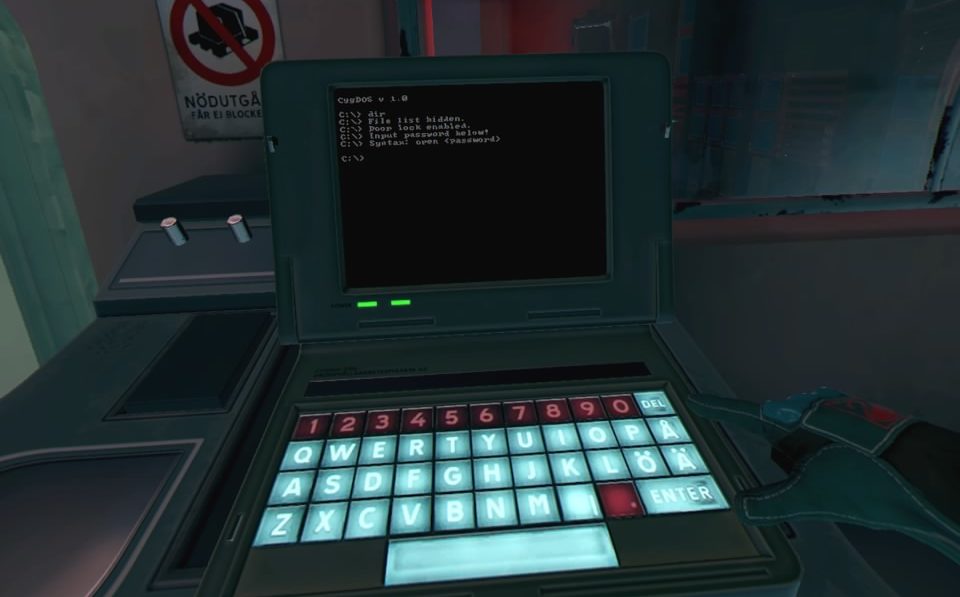 One of the core mechanics I haven’t mentioned yet is the interaction with computers, of which there are 2 types.  The first is a password entry system where you must enter a 4 digit code that you would have found somewhere else in the stage.  These computers are huge, with equally large buttons making for a serviceabe, but funny, password system.  The 2nd type are equipped with much smaller screens and a full keyboard, which presents a few issues.  You have to type in every command, letter by letter and given you rather large fingers this can be a struggle.  Collision detection can also be dicey at time so you may accidentally hit the wrong keys or double tap a letter without noticing causing you to delete what you messed up sand start over.  I liked that the computers are in there as they provide some additional backstory and clues to your current situation, I just wish there was a less tedious way to access the info on them, even just quick-keys with core commands would save a little time.

Besides the issues mentioned above, there are are a few more which are worth bringing up.  I found myself, on many occasions, walking through objects, freezing me in place until I teelported or moved in the real world.  The game relies on those access cards, but every time you finish a mission, the game removes them from your inventory, forcing you to grab the card from your home storage.  If you forget it and start a mission, more than likely you will have to quit it to go back to your home to open a drawer and the grab the card.  It makes no sense why not to just always have it in your inventory.  Enemies will also on occasion, move right into and through you making for some awkward combat moments, though this only happened a few times during my playtime.  I also struggled with the bow mechanics, specifically when trying to switch arrow types, which has to be done through your holographic menu, while enemies are shooting at you, a button to cycle through these would have been nice.   My last issue the enemy sweet spot which, in my opinion, is a bit to small making for some drawn out battles as you connect without effect 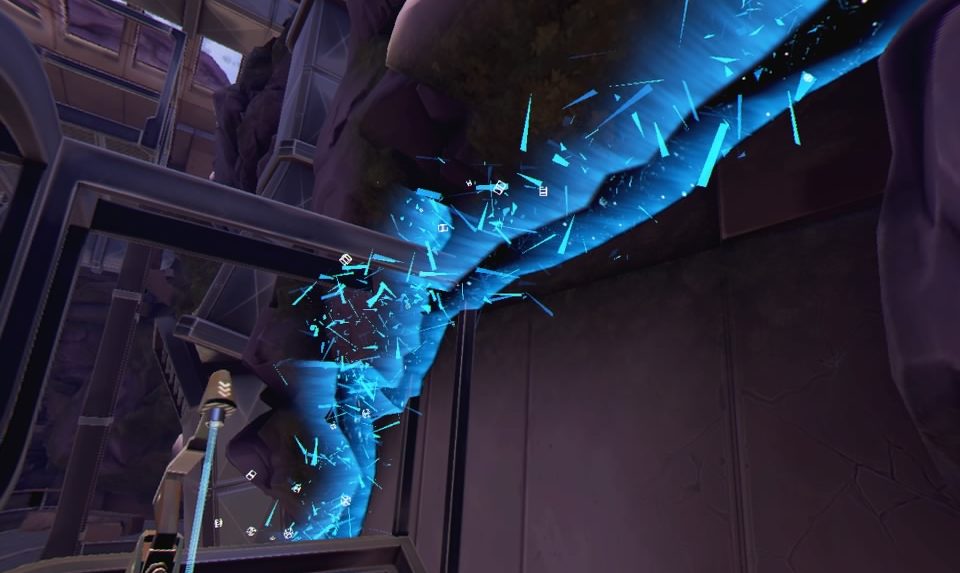 I liked many aspects of Apex Construct; the world, the story and the combat being the major ones and there is a decent amount of content here, especially for those treasure hunters looking to find every secret in the game and are willing to revisit areas left behind by the plot.  The overall package is hampered by all the issues  I brought up and while I did enjoy my time here, it was a bit messy.  If you are looking for your next VR shooter adventure, this may be worth a look but fair warning, it’s not the most polished game out there.

What would I pay?  If the issues I mentioned above were fixed, I don’t think it’s a crazy ask for $30.  Unfortuantely, that’s not the case and while I liked Fast Travel Games has done here, the value of the overall product is hampered by way to many issues.  $20 seems a little more appropriate.

Fast Travel Games provided The VR Grid with a review code for this game and, regardless of this review, we thank them for that!