Speedball Arena is an extremely fun sports game that feels akin to Rocket League in VR. Players face off in teams of two, in a massive, sci-fi stadium, using grappling hooks to launch an oversized ball into the opposing team’s goal. This game is extremely simple, and suffers from a lack of any player-base, but has developed into a fun and exciting game that’s worth revisiting.

Speedball Arena provides players with a rocket-powered car, with a grappling hook. The left controller steers, with your hand on the handle, and the trigger accelerates. Your right hand holds a large rifle, and while you can’t shoot enemy players, you can launch a grappling hook at the ball from anywhere in the map. 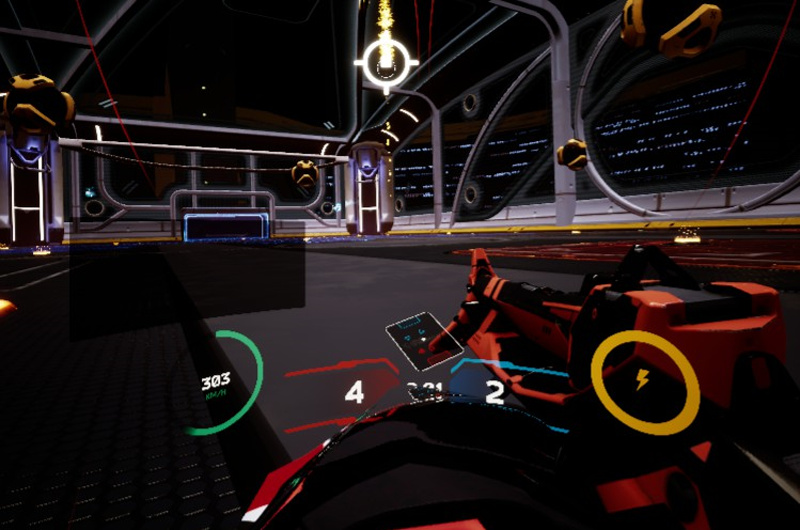 When the ball drops, it’s an immediate frenzy seeing who will be the first to grab it.

While it would’ve been nice to have more than one map, the map present is extremely well designed and visually appealing. Throughout this stadium, there are booster pads that speed you up when you touch them. There are also giant orbs that dangle from the ceiling, and grappling them flings you across the stadium at breakneck speeds. You can also jump, and enable turbo acceleration. All these options keep the game exciting and adrenaline-filled, and gives you decent freedom of movement.

Since the hook travels at a realistically slow rate, it becomes harder to grab the ball the further you are from it. This not only allows some impressive trick-shots, but also gives the game a nice difficulty curve. I started out terrible at the game, but quickly gained skill as I gave it my patience. Single player mode contains easy, medium, and hard difficulty settings, and the challenge offered varies on a fair basis. On hard difficulty, for example, your AI teammate actually passes the ball to you, which it doesn’t do on easy or medium difficulties. This AI, in general, is very skilled and is fun to play against. Their behavior resembles that of real players quite well, and keeps the game fun.

It’s a relief that this game has solid AI, because you will certainly never be playing with anyone else. The game’s player-base is totally dead, with zero active players and zero active servers at any time of day. Even if there were other players, I’m not confident that multiplayer is even playable: To work around the lack of players, a colleague and I arranged to play a round of multiplayer. After struggling to join each other’s lobbies for a while, we conceded that it probably isn’t possible to do so. I tried joining his open server through Steam, and the game launched me into a single player bot match. This may be the result of a glitch, but even if it worked, there are few (if any) people that seem to play. 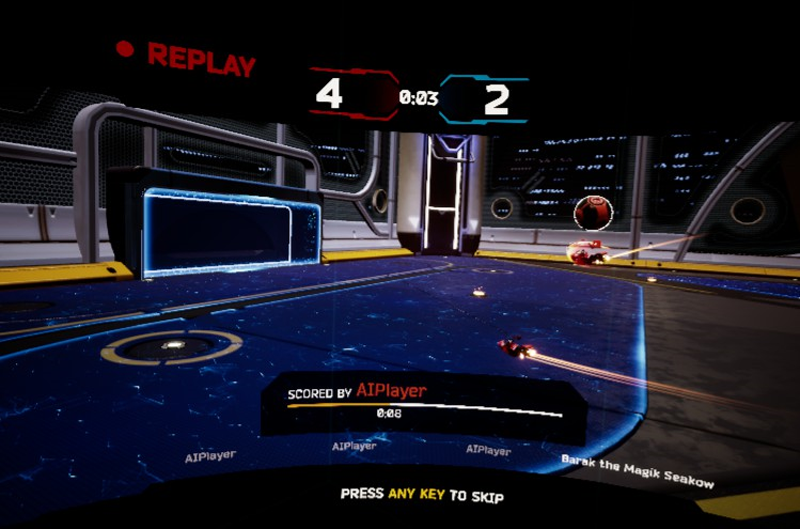 Replay cams are well-done, and it’s exciting to see how impressive my last goal was.

Each round of Speedball Arena only lasts about five minutes. With only one map, and dead multiplayer, the game remains the same every time you play. Playing on a different difficulty setting is the only way to modify gameplay. As a sports game, it’s only as replayable as you make it. You can play many times without getting bored, but it nonetheless grows repetitive quickly. After only one round, you’ll technically have experienced everything Speedball Arena has to offer.

Movement controls are also an issue. While steering, accelerating, and shooting all work fine, the “jump” and “turbo” buttons are configured to very specific parts of the trackpad, making it tough to use them while keeping control of your car. Speedball Arena also has slight calibration issues: when launching the game, you must stand (or sit, as you’re driving a car) exactly where you want your seat calibrated. This can be frustrating, since steering requires keeping your hand on a lever. If the game thinks you’re closer or further to the lever than normal, the sensitivity of your steering can make it hard to play, and requires restarting the game so it recalibrates.

Speedball Arena features a non-VR option as well, which works very well and keeps the game fun if you don’t feel like putting on your headset. This mode makes the game’s controls much easier, and doesn’t sacrifice any exciting, fast-paced gameplay. I still enjoy the game’s standard VR mode, and non-VR is a solid addition that adds to the game as a whole. The only issue with this is that launching Speedball Arena in non-VR still launches SteamVR, and turns on the headset. This isn’t particularly a problem- but players without VR, who just want to play the game, will likely have to install VR software to get it running. 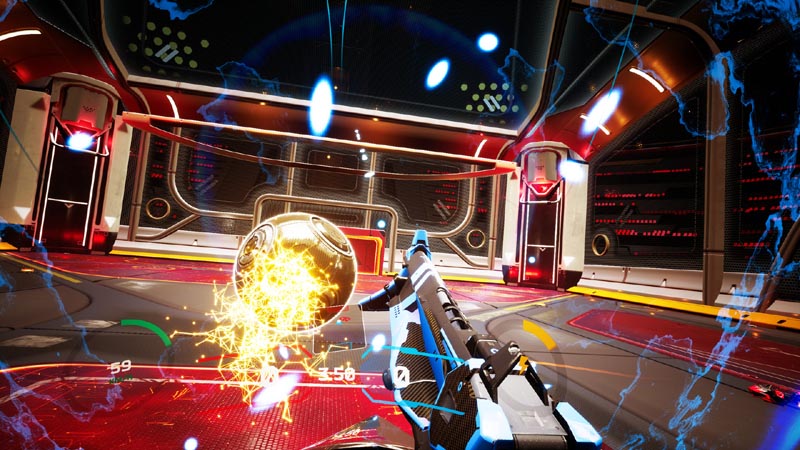 Most of the visuals are bright,colorful and fit the game nicely

The graphics in Speedball Arena are very good, with bright lighting and crisp textures. It runs very smoothly, which is necessary for a game this fast paced. Its user interface is easy to navigate, although I have mixed feelings about the heads-up display. All the information on-screen feels important, and isn’t too obtrusive to the gameplay. Still, it takes up a huge portion of the screen. There’s also a blank grey box that covers part of the screen for no reason.

Speedball Arena is an incredibly fun and exciting soccer experience that has potential to become the VR equivalent of Rocket League. It might have some serious problems, such as being repetitive or having a dead player-base, but the experience is fun enough to be worth revisiting on occasion.

What would I pay for it? I would pay $10 for Speedball Arena, which is its retail price. For fans of soccer or Rocket League, this game is worth picking up. Just don’t expect anyone else to be playing multiplayer.

Reality Reflection provided a review code and, regardless of this review, we thank them for that!